The Pitch: Forget Rise of the Machines, forget Genisys, forget The Sarah Connor Chronicles — those timelines have been erased. Skynet is dead, and Judgment Day has been averted, but it seems history isn’t done sending robot skellingtons back from the future to kill people before they can stave off a nuclear apocalypse. The players are different, but the story stays the same: a young woman in 2022 Mexico City named Dani (Natalia Reyes) finds herself on the run from a new kind of Terminator called the Rev-9 (Gabriel Luna), a gooey blend of the T-800 and T-1000 who can split into two separate Termies when the situation arises. In this new timeline, she’ll end up heralding the salvation of humanity in a robot-infested future, and the machines want to stop that before it happens.

Luckily, Dani’s got help in the form of Grace (Mackenzie Davis), a stalwart soldier from the future enhanced with Terminator-level strength and reflexes, and an older, battle-hardened Sarah Connor (Linda Hamilton), who’s spent the intervening years hunting down Terminators and finds herself crossing paths with this new group of survivors. Together, they’ll have to protect Dani and ensure humanity’s survival — with the unlikely aid of an older-model T-101 (Arnold Schwarzenegger) who has a curious connection to Sarah’s past.

(Read: The Terminator Created a New Kind of Hero With Kyle Reese)

No Fate But What Nostalgia Makes: Can you believe that we’ve tried four different times to make a good Terminator 3? Sequels, reboots, TV series, 3-D spectacle rides — the Terminator series is one of the most fascinating exercises in a franchise that, despite everything you throw at it, simply will not die. Dark Fate, to its credit, is arguably the strongest of those efforts, a rollicking action-adventure picture that actually takes time to build out its characters, even as it devolves into exhausting, repetitive smash-and-crash slugfests by the end.

In the director’s chair, Tim Miller (Deadpool) does a just-fine job juggling the quiet character moments with all of the CG-coated melees on display, with just enough gasps of invention to stand out. When the action’s stripped down to Davis’ authoritative Grace slugging it out with Luna’s steely-eyed Rev-9, Dark Fate feels appropriately grounded in its survival story. But then an overlong, nighttime third act tosses our heroes through dimly-lit cargo planes, waterfalls, and even a power plant with all kinds of spinny apparatus.

Bottom line: You can only watch metal men and women punch each other through walls so often before your eyes glaze over. Also, how is it that flashbacks to younger Arnie, Sarah, and John Connor look pitch-perfectly de-aged, but the Terminator fights here still look like Matrix Reloaded-era video game sprites? 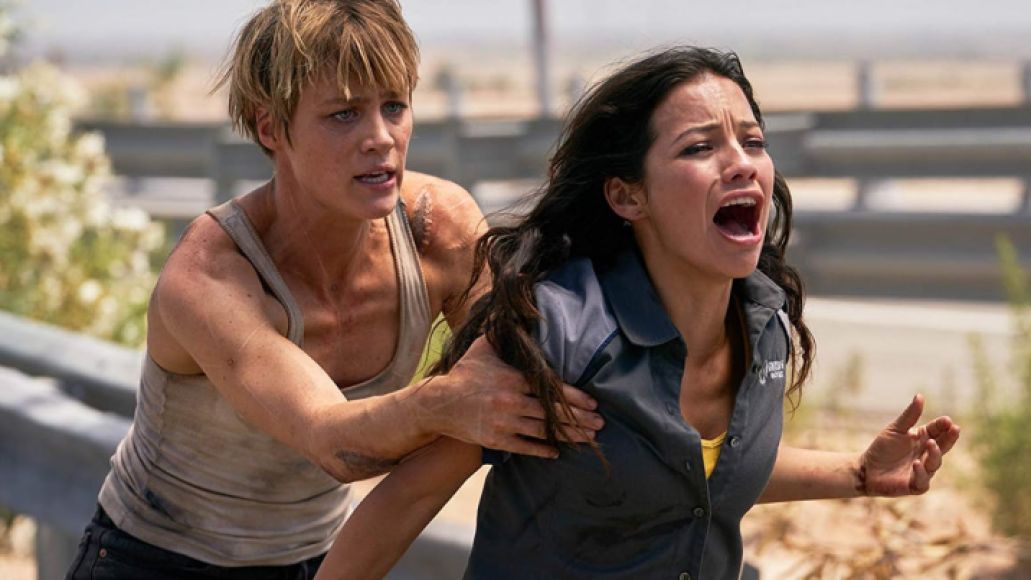 On Your Feet, Soldier: But as I said, it’s the character beats in the first two acts that work. As Dani, Reyes captures the spirit of Linda Hamilton in the first film — a young woman thrown out of her element, but who finds the inner strength to grow into the leader she needs to be. With so many protectors (Grace, Sarah, the T-101) talking past her and doing the dirty work, she can sometimes get lost in the shuffle. But Reyes has it where it counts, and by the end, she makes for a capable lead.

The same goes for Davis’ Grace, a true believer for the cause whose amped-up metabolism gives Davis a compelling sense of urgency. She makes for a fantastic action heroine, and she blends the best parts of Michael Biehn’s desperate resolve and O.G. Arnie’s strength. If not for the film’s need to throw older stars into the spotlight in the second half, I’d have loved to have focused more on Grace and Dani’s intriguing dynamic. 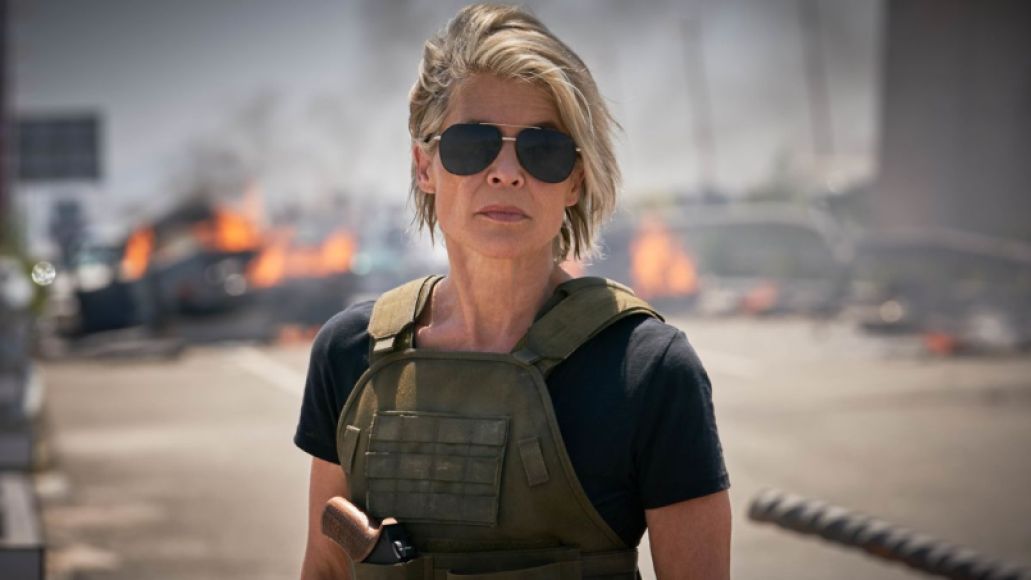 But of course, if you have to bring in older stars to tickle the nostalgia synapses, you can’t really do better than Hamilton’s triumphant return as Sarah Connor. Even in her sixties, she’s an absolute badass, a battle-hardened warrior queen embittered by the tragedies of time and her own grim purpose. Acerbic and wearied, a chain-smoker’s voice rattling off one surly quip after another, this Sarah feels like the character taken to her logical end-point. Watching Hamilton back on the big screen, fully in command of a summer blockbuster in her sixties, it feels like a tragedy that she hasn’t been along for the ride this whole time.

And, of course, you can’t make a Terminator movie without Arnold (or, in Salvation‘s case, a CG lookalike), and while his character breaks the story a bit, he remains a welcome presence. “Carl”, as his reformed Terminator is known, answers the question of “What does a Terminator do when his mission is completed?” Turns out, he just decides to hang around, learn to be more human, and start a family. What results is some of Arnold’s career-best deadpan as he tosses back Coronas, snugs his family, and pets a heckin’ good pupper. As the action grows more and more outsized, he feels increasingly vestigial to the proceedings; his presence makes Grace frustratingly redundant, for one. But hey, it’s a huge step up from the goofy “Pops” version we got in Genisys. 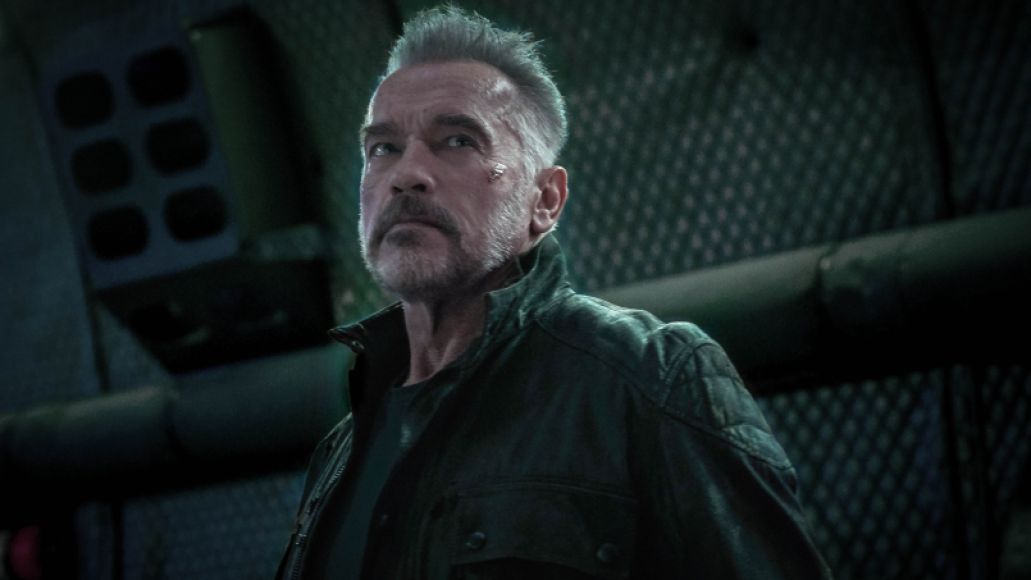 ICE-ta la Vista, Baby: In its attempts to update the franchise for a new generation and new sensibilities, Dark Fate suffuses itself with the trappings of our modern political moment. For one thing, this film centers around an erstwhile family of three women attempting to survive a world increasingly hostile to them, and the savior of humanity is a woman of color. Their journey takes them through a perilous attempt to sneak across the border to America, and even through an ICE detention center (“Don’t call them prisoners,” a Border Patrol guard says in one particularly on-the-nose moment). “You are the future,” Grace says to a frightened Dani at one point, and it feels directed as us as well. Dark Fate, however clumsy in its presentation, manifests the idea that women, people of color, and immigrants feel somewhat targeted for extermination, especially right now.

The Verdict: When it comes to the Terminator franchise, there are only so many ways to skin this particular cat. Dark Fate, to its credit, goes back to basics with a comparatively stripped-down survival chase, rather than toying with timelines and bloated casts. But in sticking to what works, and only changing up a few elements of the formula, it feels more than a little repetitive. It’s great to see Arnie and Linda Hamilton in the saddle again, and Davis and Reyes are welcome additions to the cast, but it’s probably time to terminate this franchise for good, and be thankful they went out on this serviceable note.

Where’s It Playing? Terminator: Dark Fate absolutely will not stop, ever, until it reaches theaters November 1st.