The Pitch: As King Henry IV (Ben Mendelsohn) dies of a lethal combination of leprous lesions and congestive heart trouble (or so historians have guessed), he wants his son Henry or Hal (Timothée Chalamet) to take over for him. Of course, years of Hal wasting away in brothels, drinking with his veteran friend John Falstaff (Joel Edgerton), actively pissing away his good name to spite his father has naturally left a bad taste in the king’s mouth. He nominates Henry’s brother Thomas (Dean-Charles Chapman), who immediately dies in combat, leaving Henry to take over when he rushes in to to scold his father and receives a deathbed coronation instead. Now it’s up to him to lead the kingdom out of the cluster of civil wars being fought on all sides. He can hardly focus on uniting the Scots and the Welsh, however, because the French keep taunting him into war and as his father’s most trusted advisor (Sean Harris) keeps telling him the people won’t support a coward for king. There’s only one thing for it: War with the French.

Play, Sir: Orson Welles’ 1966 film The Chimes at Midnight was comprised of scenes from Henry IV, parts 1 and 2, and Henry V, and it took years to be seen restored, as was the case with nearly all of his works. His ingenuity with a low budget and his bone-deep instinct for the movement of a camera and the length and placement of a cut were intact from his early career. It put the lie, once again, to the idea that Welles had lost his touch. This is important because Chimes is the definitive take on the story of Prince Hal and Falstaff, two of Shakespeare’s most endearing creations.

Hal, of course, was King Henry V, the historical king of England. Falstaff was based on a couple of historical icons, including Hundred Years’ War veteran John Falstoff and Henry V’s real-life companion John Oldcastle. Oldcastle’s relatives didn’t care for the depiction of their relation as a corpulent hell raiser, so the name was changed. Oldcastle’s real story is fascinating as well, who refused to apostatize and was arrested and nearly put to death but he escaped from the tower of London. When they finally caught up with him, they transported him back to London in the back of a horse cart to die and burned the gallows while he was still hanging.

What’s all this got to do with The King? Well, between the definitive edition of the fictitious record of the Battle of Agincourt and the reality of the men who inspired it, just what did writer Joel Edgerton and writer/director David Michod think they were going to do by simply remaking Henry IV and Henry V without Shakespeare’s dialogue. Wouldn’t you hew more closely to historical record if you were doing this for the sake of stripping the theatricality from the proceedings? A satisfactory answer to the why’s never arrives beyond Chalemet’s fitness to play a sickly drunken lord. 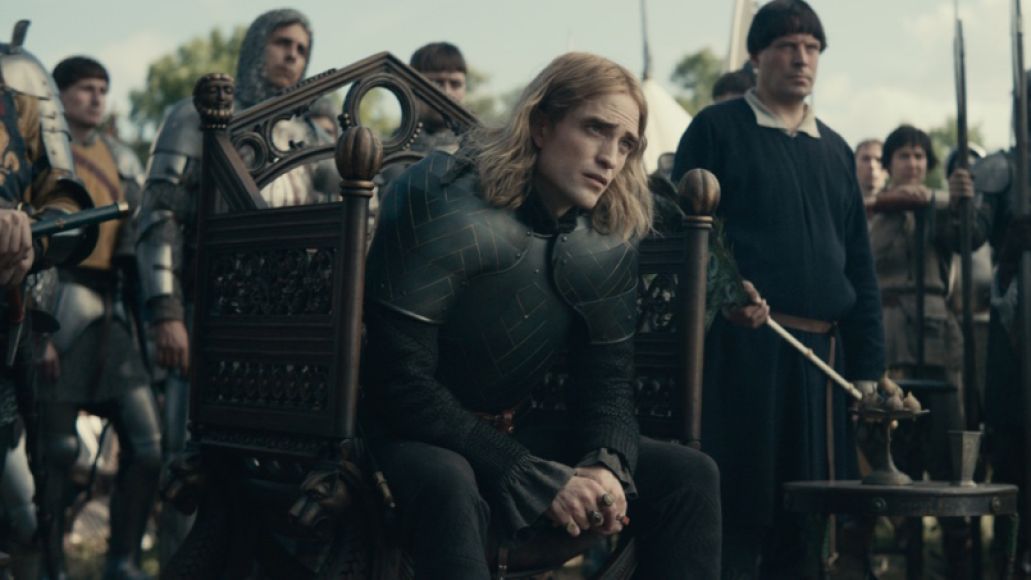 Robert Pattinson in The King (Netflix)

What Manner of Man: If you can overlook the very strange animus for the project, there’s a lot to admire. Chalemet’s wonderfully cast as Prince Hal until he has to speak. He can neither brood nor smirk with credible historicity. He’s got modern hands as well, gripping his belt as if he’s afraid of what he’d do with them out and about. Having said that, he does look very much the part, and once he’s wearing Hal’s pageboy haircut, he sinks much more into character. Edgerton does fine work as Falstaff, too, aiming somewhere between Welles and Richard Burton. Pattinson arrives with much-needed fatuous comic relief as the Dauphin, Henry’s French nemesis.

In fact, Pattinson shows up for maybe 15 minutes total and mops the floor with his somber opponent. Chalamet’s frowning seriously cannot compete with Pattinson in full-on ham mode, doing his best Jeanne Moreau impression under a blond mop. His final scene is a scream as Pattinson fully sacrifices his dignity for the biggest laugh imaginable. It’s worthy of Thorley Walters or Dudley Moore. On that same note, Harris is also a wonder as Henry’s aide, a man plagued by aches and animated by purpose. The cuts to his beatific smile as Henry slowly becomes his version of a king make Chalamet’s performance all the more believable.

Altogether, the cast prop each other up, a heartening sight in a film that easily could have catered to the boy king. 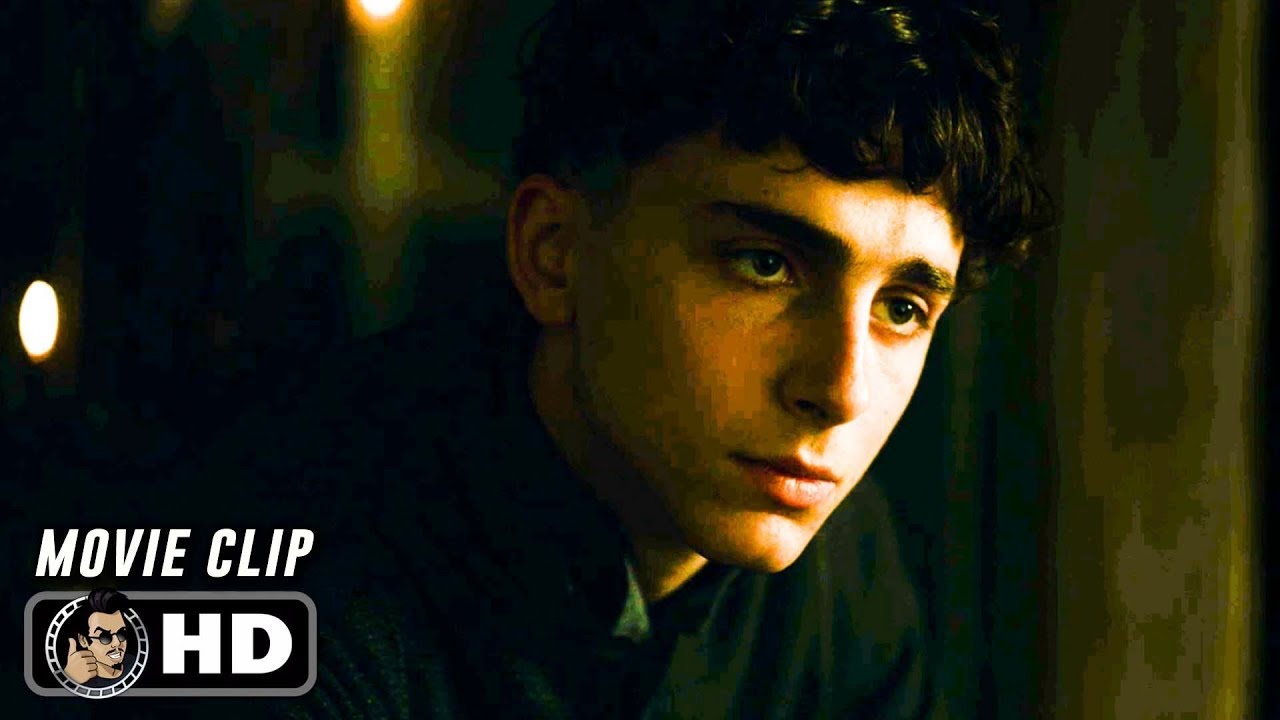 Fear No Colors: The film is handsomely photographed as well, with ace DP Adam Arkapaw killing his darlings. Arkapaw gave the distinctive lighting quality and chromatic identity to Justin Kurzel’s Macbeth, Cate Shortland’s Lore, and the first seasons of both True Detective and Top of the Lake. He was beginning to repeat himself (look at Assassin’s Creed, so steeped in his usual color and tones it was like trying to look through tea steeped for a day), but here he returns renewed, giving the film a stark, nearly monochromatic look. It’s an impressive approach, as stirring as the visceral sound design. You’ll feel your seat rumble as arrows are loosed on the fields of Agincourt and as trebuchets loose rocks on the French.

I Banish Thee On Pain of Death (The Verdict): It remains a frustration that Edgerton and Michod chose this angle for the project. If telling the true story of Henry V for audiences was what they had in mind, why not excise Falstaff? If Edgerton wanted to play Falstaff so badly, why not make a movie about the historical Oldcastle? Siphoning Chimes at Midnight or Shakespeare’s writing says you think you’ve found a better approach to the subject, and, well … they haven’t. The King is perfectly alright if you’re looking for a large-scale epic with dozens of extras and fine performances, it just can’t help but be Not Chimes At Midnight. And if it sounds unfair to compare a movie to Orson Welles, likely the finest director the medium ever laid claim to, then maybe not remake his movies in approximated Victorian without crediting him. As part of the new cycle of revisionist medieval epics (Kurzel’s Macbeth, David Mackenzie’s The Outlaw King), it’s certainly gripping and buries Kenneth Branagh’s boyish and chipper version of the same tale. This was just never going to be everything it needed to be.

Where’s It Playing? The King is in limited theaters now and hits Netflix on November 1st. 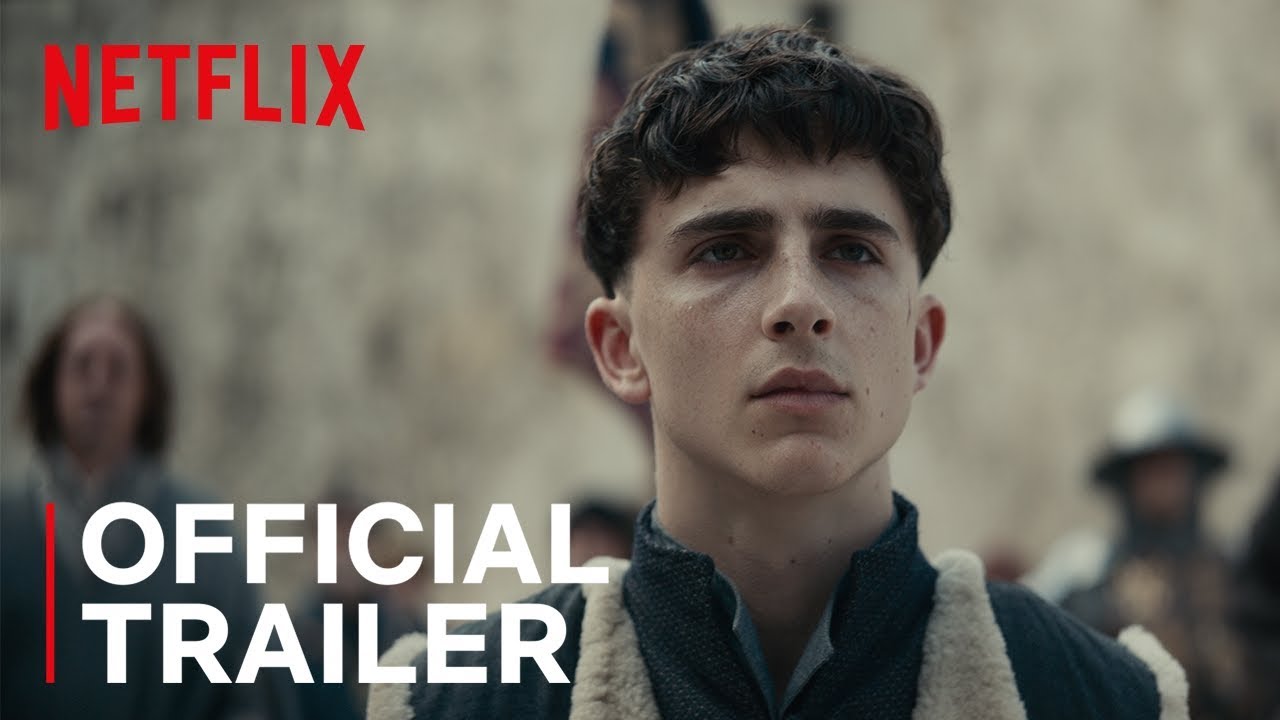 Film Review: The King Struggles to Conquer The Past