The Pitch: A decade after the events of the first film, Tallahassee (Woody Harrelson), Columbus (Jesse Eisenberg), Wichita (Emma Stone), and Little Rock (Abigail Breslin) have set up shop in the White House and settled into a familiar routine. The day-to-day ennui begins to grate on Little Rock, and, after a botched marriage proposal by Columbus, the two women hit the road.

Fate intervenes in the form of Berkeley (Avan Jogia), a hippie stoner who whisks Little Rock away to Graceland, leaving the other three — plus new addition Madison (Zoey Deutch) — hot on their trail. But there’s something more threatening to the makeshift family than the open road: the emergence of a new kind of zombie, the T-800, which is not only faster, but harder to kill.

History Repeating: The biggest criticism of Double Tap is that the new film fails to do more than recreate (slight variations of the events of) the first film. Director Ruben Fleischer and screenwriters Rhett Reese and Paul Wernick, plus new addition Dave Callaham, have cooked up a sequel that perfectly captures the tone and aesthetics of the original, without any kind of acknowledgement that the landscape for zombie properties has changed in the interceding 10 years.

What once felt fresh — the block lettering of Columbus’ rules literally appearing onscreen, the celebrity cameos, the self-reflexive meta humor — no longer feels unique. If anything, much of Double Tap feels antiquated, like a sequel frozen in amber from 2009 that has only recently been thawed out. It’s not bad, per say, but it’s far from innovative and, in the end, doesn’t offer anything new to the subgenre by way of character or plot. 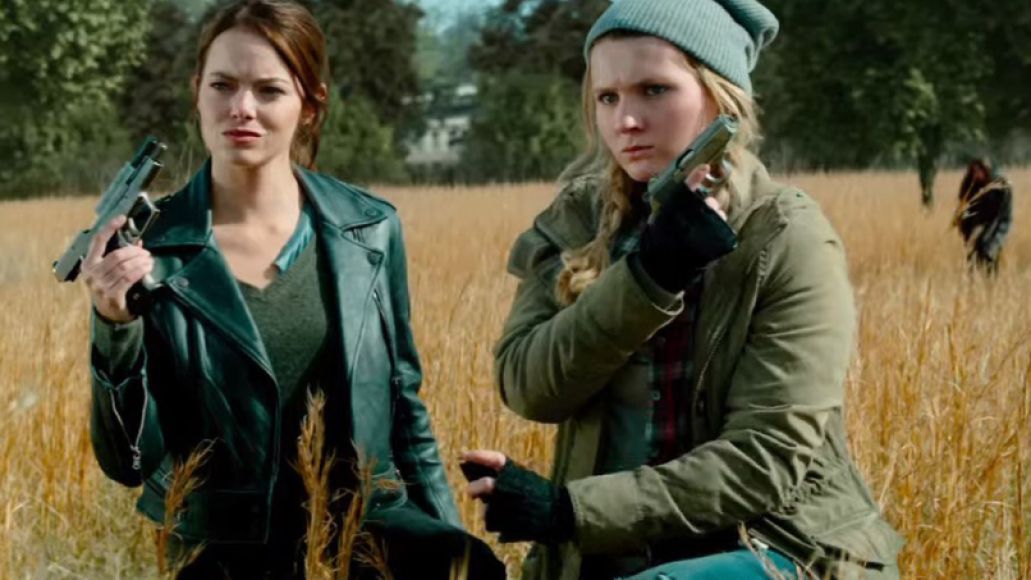 Stalled Momentum: The film is more or less a repeat of the original. The entire narrative hinges on the characters realizing the value of their makeshift family, which is the same ground that the first film covered. Tallahassee yearns to go out on his own and be a lone wolf, but the reality is that he loves being a surrogate father to Little Rock. Wichita, meanwhile, has commitment issues and Columbus exacerbates her fears. It’s all very familiar, up to and including the adventure-style narrative of venturing out on the open road in order to realize that the people you’re travelling with are your home/family.

This creates a pervasive sense that Double Tap is merely going through the motions and spinning its wheels. The trip to Graceland is emblematic of this issue: there’s an action sequence where the group tries to reclaim an RV, but this action is almost immediately undone and then abandoned a few moments later. It’s intended as a joke — one that becomes a recurring gag about their choice of vehicle — but the pay-off is so obvious and shrug-worthy that it feels like the screenwriters are wasting time to pad the runtime.

The same can be said of an extended joke that plays out when Tallahassee and Columbus meet their doppelgangers, Albuquerque and Flagstaff (Luke Wilson and Thomas Middleditch). The joke is that the two sets of men share identical characteristics, but they don’t see it. Again, the joke is immediately evident, but then it goes on for five more minutes. This encounter is arguably the film’s most self-referential gag and it works … until it is run into the ground. 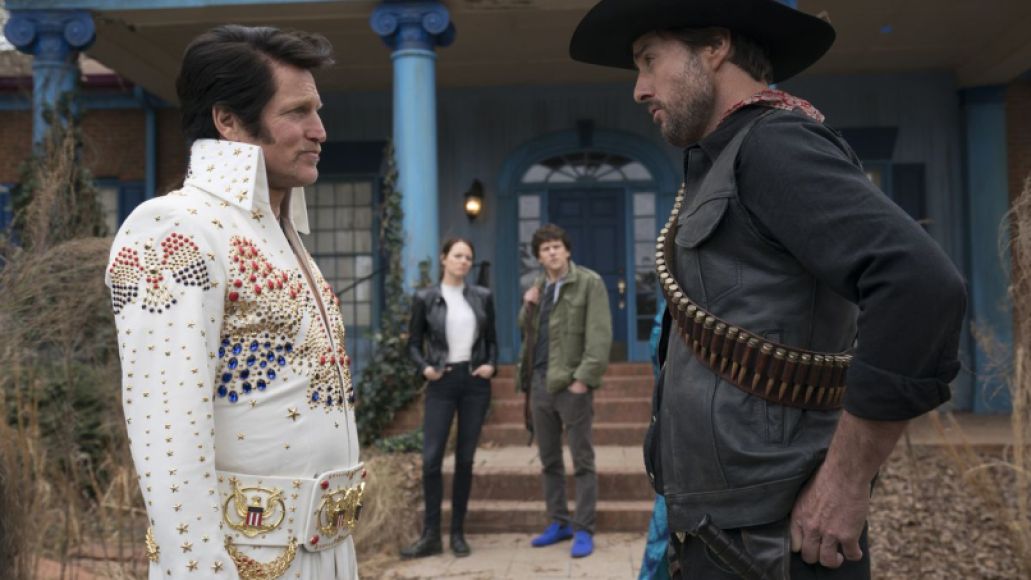 Blonde Highlights: If Double Tap has one bright, shining light, it is Zoey Deutch, who single-handedly steals the film when she appears roughly 20 minutes in. The sequel initially struggles to find its rhythm and recapture the deft balance of comedy and horror that made the first film so enjoyable. Even though all of the returning actors are game, everyone is a bit stiff and awkward, as though something is just a bit off.

When Wichita and Little Rock take off, the despondent boys hit the mall for some Segway retail therapy. There they discover vapid Madison, who survived the apocalypse by living in a walk-in freezer. The character is a spiritual cousin to Anna Faris’ House Bunny or Karen from Mean Girls, an intellectually challenged, made-up blonde bimbo who can’t read the room, but is actually quite sweet.

Deutch’s line delivery and mannerisms (peace signs are back, baby!) manage to elevate the character from shallow caricature to comedic dynamo. Considering how much the film focuses on Tallahassee, Madison becomes an essential foil in undercutting his cynicism and sarcasm. Although the character of Madison is aggressively one-note and, in some ways, unimportant to the overall plot, Double Tap only truly comes alive when the bimbo is onscreen. 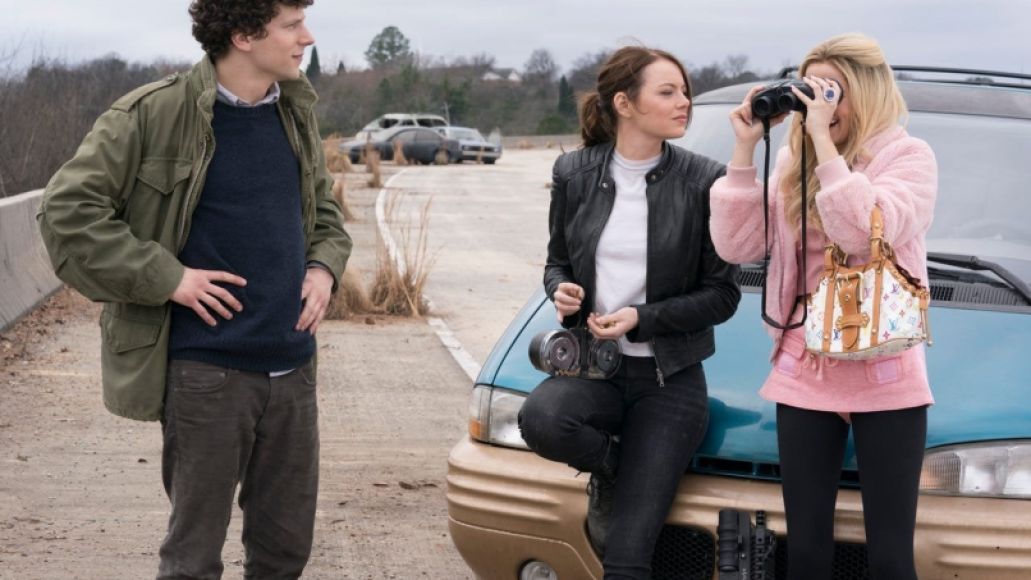 Buffalo Jump: One of the film’s most aggressively off-putting elements — and the component that makes Double Tap feel as though it has been languishing for a decade in a freezer of its own — is its weirdly antiquated notions of sex, gender, and race. Tallahassee has always been representative of certain outdated beliefs, from his “nut up or shut up” catch phrase to his quips about Columbus’ effeminate characteristics, but the character’s lack of emotional growth between films (and even during this one) is glaring. Double Tap doubles down on this quality with Tallahassee’s out-of-the-blue admission that he considers himself part Indigenous. The screenwriters assume that the audience is eye-rolling along with Columbus and Wichita, but the uncomfortable character trait then becomes the lynchpin for the film’s climactic set-piece in a completely unironic way. It is all done in extremely poor taste, and by doubling down on it as the final big joke, the film problematically never acknowledges it as such.

Couple this with Wichita’s outdated fear of marriage, the all-heterosexual partnering up at film’s end, and the mild slut shaming of Madison and Double Tap feels oh-so-2009.

The Verdict: Zombieland: Double Tap is a familiar redo of its predecessor, from the plot to the character beats to the action set pieces. Despite failing to offer much in the way of freshness or originality, fans of the original will still find this new adventure a suitable companion piece. If nothing else, Double Tap should help to raise the public awareness of Zoey Deutch’s greatness, which is reason enough for the film’s existence.

Where’s It Playing?: Zombieland taps back into theaters October 18th.

Film Review: Zombieland: Double Tap Is a Familiar Return to 2009