Beauty is in the eye of the beholder. Art is subjective. Music and movies aren’t about competition; they’re about artistic expression. Well, for those of you who know better than to believe those lies, welcome to another installment of Vs. This time around, Clint Worthington heads to Gotham City for one long laugh with the Clown Prince of Crime.

For better or for worse, it’s Joker’s world right now, and we’re living in it. Todd Phillips’ gritty, provocative take on the classic comic book baddie has been bottlenecking the much-dreaded Discourse, but also theaters given its $93 million opening weekend.

Central to its appeal, besides Phillips’ approach to a gritty, Scorsese-ian Gotham City, is Joaquin Phoenix’s performance as Arthur Fleck, a man on the edge whose humiliation and frustration at an uncaring world transforms him into the Clown Prince of Crime.

Even in the most mixed or scathing reviews of the film, Phoenix’s performance has largely been hailed as a bold new take on the character: Alissa Wilkinson of Vox called it “finely layered,” and our own Sarah Kurchak leavened her mixed review with an admission that Phoenix “breathe[s] strange new life into” the titular villain.

Of course, Phoenix has big, floppy clown shoes to fill: Every iteration of the Joker must weigh itself against the new standard set over a decade ago by the late, great Heath Ledger in The Dark Knight. It’s the role that won him a posthumous Oscar for Best Supporting Actor — for a comic book movie, no less! — and also redefined the character for an entire generation of Bat-fans.

Yet it also set an incredibly high standard that no one — not even Jared Leto, the kid from Gotham — has been able to touch up till now. So, with Phoenix’s name on our red-painted lips, we thought it might be wise to see where Arthur Fleck matches up with — and greatly differs from — Ledger’s anarchic enigma. Just picture me breaking a pool cue in half and tossing each shard in their direction: we’re gonna have tryouts. 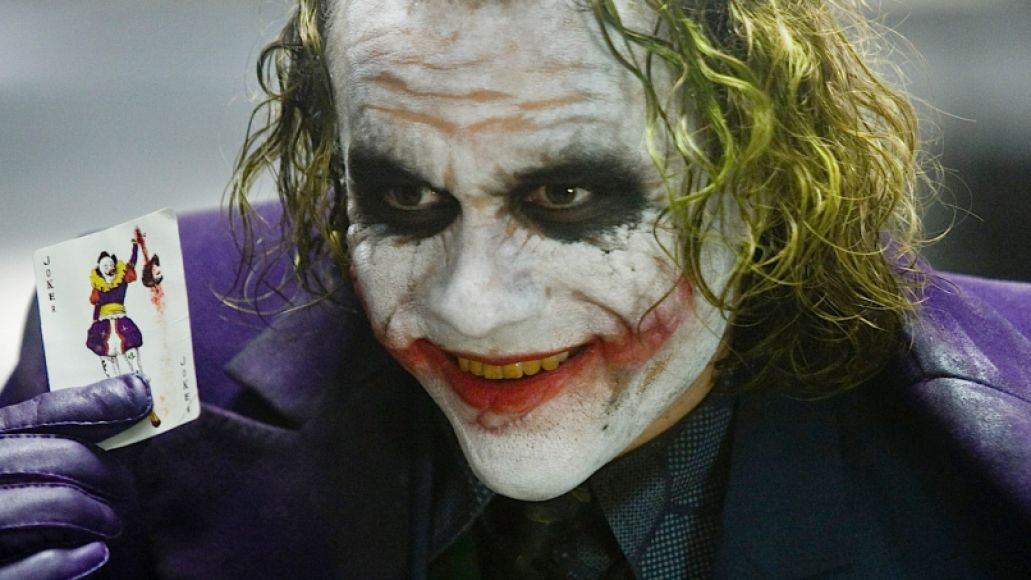 As with all things, we have to start at the beginning. Where does the Joker come from? This is probably where Ledger and Phoenix’s portrayals differ the most. In The Dark Knight, the Joker has no name, no discernible origin; he’s an enigma, a manifestation of the moral rot at the heart of Gotham, of the chaos that happens when we ignore the social contract. Each time he asks, “You wanna know how I got these scars?”, he tells a different story. In a lot of ways, his Joker isn’t meant to be human. Instead, he’s a symbol, a status of criminal mastermind that Ledger deliberately adopts. 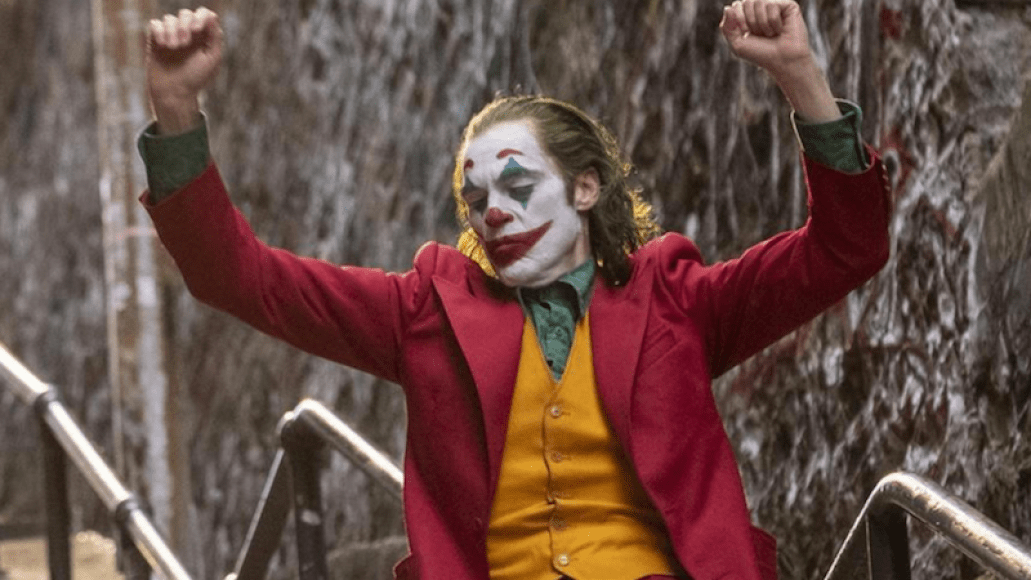 On the other hand, we know almost everything about Phoenix’s Joker. Phillips painstakingly details Arthur Fleck’s road to madness, making sure we see every step of the ride. As we learn, Fleck’s a lonely, disenfranchised man besotted by poverty, crime, and the infrastructural breakdown of Gotham City. He even has his sympathetic moments: he cares deeply for his mother, has connections to friends and family, and wants to find adoration and acceptance from others as a stand-up comedian.

In that sense, his Joker is borne, as he not-so-subtly says to Robert De Niro’s Murray Franklin, out of being a “mentally-ill loner” who meets a “society that abandons him.” Sure, there’s a fair amount of ambiguity about his real origins — is he Thomas Wayne’s love child, or are the Arkham records right and he’s the adopted, abused child of a mentally ill woman? — but it’s all very explicit by comparison.

Bottom line: We know Arthur Fleck in ways we simply don’t with Ledger’s version of the Joker. However, the more we learn about him, the less his killer punchlines sting. In the right circumstances, it’s possible Fleck could have been a good person.

What joke is each Joker playing on Gotham City? Ledger’s, like we mentioned before, is revealing the punchline that civilization is a lie perpetrated by barely-evolved simians who only stop from killing each other based on invisible lines of civility and kindness. For Arthur, the joke is narcissistically on him — he has no thematic or criminal connection to the rest of Gotham, just an axe to grind.

Ledger’s Joker is a highly political figure, one whose entire criminal enterprise is driven to conveying a single political message: People are “only as good as the world allows them to be” and that “when the chips are down, these civilized people will eat each other.” Whether it’s breaking down Batman’s legacy and reputation, or rigging two boats with explosives to highlight the class divides in Gotham, his Joker acts more like a moral test for Batman and the rest of the city than a fully-fleshed out character. 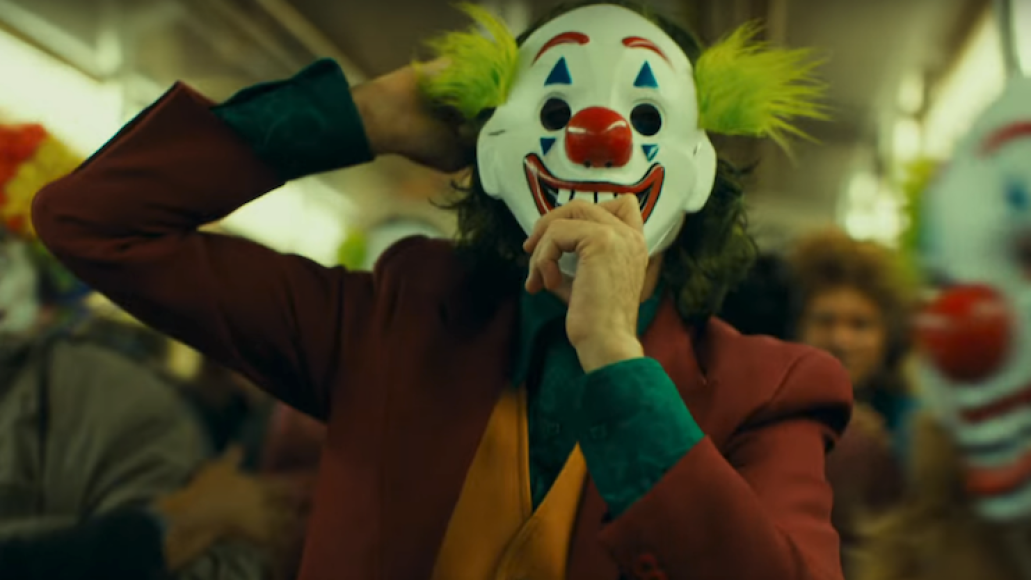 As for Arthur Fleck, his Joker claims he’s “not political”; indeed, that’s borne out by the accidental revolution that sparks around him after he kills three Wayne Finance bros on the subway in a fit of impotent rage. He didn’t ask for that, and seems barely interested in the political unrest around him. Even as he embraces the throngs of mask-wearing vandals who cheer for him after the riots enter their full force, he doesn’t consider it a victory for The Cause. It’s another narcissistic delusion: he just wants to be loved and adored, and now he’s got a crowd of adoring fans, regardless of how he lucked into them.

Between Heath Ledger, Mark Hamill, and Joaquin Phoenix, the role of the Joker has become kinda like Hamlet. Every actor wants to play the Dane, and the same group of folks would also love to throw on Mr. J’s makeup and lose themselves in Gotham. For their parts, Ledger and Phoenix’s turn at bat have lent themselves greatly to the mythologizing of actors transforming themselves to take on difficult roles.

Ledger famously locked himself in a hotel room for a month, and it’s often claimed that the psychological toll of the role contributed to his untimely death. Similarly, Phoenix, never one to shy away from physically- and mentally-demanding performances, lost 50 pounds for the role (in ways that seem indicative of an eating disorder, if we’re being honest), and was said to be so in-character while filming that he’d occasionally have to leave the set.

But how does this show in each of their respective performances? Well, Ledger’s Oscar-winning performance is remarkable for a reason. As a raspy, grotesque madman with a Glasgow smile, stringy green hair, and half-melted clown makeup, his Joker is equal parts Alex DeLarge and Danny Devito’s Penguin, a haunting mix of macabre menace and sheer gross-out eeriness. His voice, a Daffy Duck-like rasp, is a perfect match for his deliberately affected look (honeycomb-patterned purple dress shirts, his purple three-piece suit).

Contrast that with Phoenix’s Joker, who takes on a much more Chaplin-esque physicality as Fleck, alluding to his history as an actual working clown. He expresses himself through a kind of blindly expressive dance at his most elated moments, and he speaks with a wounded, delicate singsong — a fragile little songbird from whom his violent tendencies seem a horrifying surprise. It’s the kind of performance we’ve seen elsewhere from Phoenix, Arthur Fleck sitting somewhere between his pained contract killer in 2018’s You Were Never Really Here and Freddie Quell in 2012’s The Master.

As watchable and empathetic as Phoenix is during the best moments of Joker, we have to give it to Ledger. It’s an unforgettable performance for a lot of reasons, but mostly because Ledger’s version of the Joker fits the essence of the character. It’s a deeply weird performance, one informed by the Hamills and Nicholsons of the past while making it his own. Fleck, with his hangdog expressions and marginalization at the fringes of society, is less a Clown Prince of Crime than he is an unwitting catalyst for class revolution. What’s more, so much of his appealing strangeness has been explored in the actor’s other work; apart from the physical transformation, there’s just not as much there that differs from his other output. It’s not as completely transformative as Ledger, and honestly, given Joker‘s Taxi Driver/King of Comedy connections, it’s fair to say Fleck’s DNA has been floating around in the cinematic ether for nearly 50 years.

Heath Ledger vs. Joaquin Phoenix: Which Joker Gets the Last Laugh?