Lana Del Rey, songwriter, poet, and occasional mindreader, is touring behind her excellent new album, Norman Fucking Rockwell!. An artist who has always found inspiration in the work of others, LDR has been incorporating some classic covers into her repertoire as she supports the release.

Last month she collaborated on Leonard Cohen’s “Chelsea Hotel No.2” with Cohen’s son, Adam, and her rendition of “break up with your girlfriend, i’m bored” got Ariana Grande’s seal of approval. Of course, there’s also her crowd-favorite take on Sublime’s “Doin Time” from NFR!. Now, fans have captured concert footage of Del Rey covering Joni Mitchell’s “For Free”.

In two separate videos, one from a show in Vancouver on Monday and another from Seattle on Wednesday, LDR takes just a couple of BPMs off Mitchell’s already stately song. It’s the story of a millionaire musician riding around in a black limousine who stops, stunned, hearing a “real good” street musician playing “for free.” Mitchell’s rock ‘n roll voice lends the song a hot self-loathing, whereas LDR’s take carries a colder, depression-chic.

Update, October 7th: Del Rey has continued to perform the song live, but at her recent show in Berkley, California, she followed it up by bringing out Joan Baez to duet on “Diamonds & Rust”. She also ceded the stage to Baez for a solo acoustic cover of Bob Dylan’s “Don’t Think Twice, It’s All Right”.

Watch Lana Del Rey’s cover of “For Free” below. You can see what other songs she tackles on stage by getting tickets to her upcoming shows here. (She’s already teasing a cover of Eagles’ “Hotel California” for her upcoming show at Hollywood Bowl.) 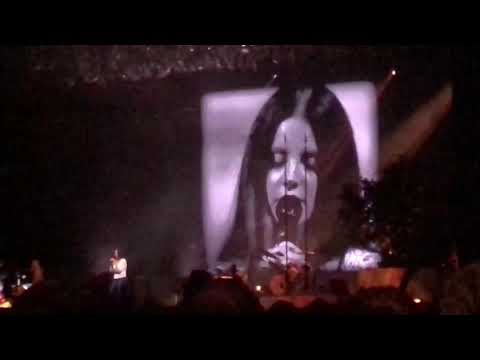 While Norman Fucking Rockwell! is practically still hot off the presses, Lana Del Rey has already announced its follow-up, White Hot Forever. Look for that to drop sometime in 2020. LDR also collaborated with Miley Cyrus and Ariana Grande on “Don’t Call Me Angel” for the Charlie’s Angels reboot out next month.