Setting the Stage: Five years ago, the odds of classic Misfits members Glenn Danzig and Jerry Only reuniting onstage seemed as likely as teenagers from Mars invading Earth. The rift between the two rockers lasted 30-plus years before they agreed to put their differences aside and start performing together again in 2016 as The Original Misfits. The lineup includes fellow classic member Doyle Wolfgang Von Frankenstein, along with ex-Slayer drummer Dave Lombardo and onetime Joan Jett & The Blackhearts guitarist Acey Slade.

Earlier this year, a document surfaced that suggested that Only and Danzig had only agreed to play at least 10 concerts in order to settle their longtime legal disputes, casting a shadow over the entire reunion. With the band already having played the apparent 10-show minimum, and with no other concerts remaining on their schedule, there was a feeling going into the band’s gig at Madison Square Garden on Saturday that it could be their swan song.

With the opportunity to see the horror-punk legends together onstage for perhaps the last time, the buzz in and around Madison Square Garden was palpable. Long lines formed at the merch stands, as fans looked to sport the Misfits’ iconic Crimson Ghost skull logo in support of the band’s gig at the “World’s Most Famous Arena.” And it wasn’t just the Misfits who were there to entertain the sold-out arena. A legendary night of punk-rock was to come, with The Damned and Rancid providing support.

Taking the Stage: UK punk veterans The Damned kicked off the festivities at 7:30 pm, with the arena about half full. Guitarist Captain Sensible joked that it was great to be playing at CBGB, which actually proved to be quite prophetic, as the entire night had the feel of an old-school show at giant punk-rock club. With singer Dave Vanian leading the charge, the band ripped through 10 songs, including classics like “Love Song”, “I Just Can’t Be Happy Today”, and “New Rose”.

Rancid would take the stage next, bringing almost 30 years of California punk rock with them. Playing to a nearly full house, the band launched into “Roots Radicals” from 1995’s … And Out Come the Wolves, a classic album that would be well represented during Rancid’s set. With the momentous occasion of opening for the Misfits and playing Madison Square Garden, there was an extra skip in singer-guitarist Tim Armstrong’s signature shuffle, as the band fired off other Wolves classics like “Journey to the End of East Bay”, “Maxwell Murder”, and “Old Friend”.

At one point, guitarist-singer Lars Frederiksen shouted out old-school New York hardcore bands like Cro-Mags, Agnostic Front, Madball, and Sick of It All. And more Big Apple love came when the New York-centric chorus of “Olympia, WA.” got a massive sing-along. The 18-song set ended with the infectious “Ruby Soho”, heating up the packed arena for the historic headlining show that was to come. 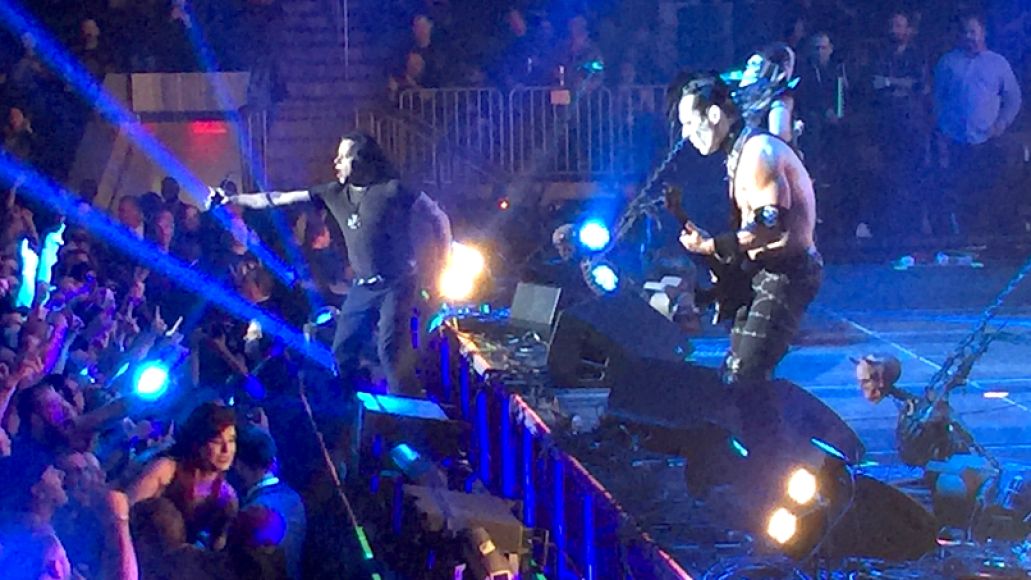 With two giant Jack O’ Lanterns adorning each side of the stage, and skulls projecting in the rafters of The Garden, it was time for the main event. The sold-out arena was now completely full, with fans ranging from pre-adolescent kids with devilock hairdos, and senior citizens sporting old-school Misfits shirts. And then the lights went down, and a magnificent roar emanated from the crowd.

Starting with Jerry Only’s 30-foot knee slide across the stage, Doyle’s monstrous stomp-walk, and Glenn Danzig’s high-energy entrance on the opener “Death Comes Ripping”, something seemed magical about this night right from the beginning. The band was fired up, to say the least, but there was also a sense of camaraderie among the members that belied the years of strife that plagued their relationships. Glenn and Jerry were genuinely enjoying each other’s presence onstage, hugging one another, smiling, and rocking out like the young kids who started the band in the late ‘70s.

Danzig soaked in the moment, telling the crowd that 40 years ago it was inconceivable that a punk band would headline Madison Square Garden, let alone sell out the arena. His voice was in fine form, and the band ripped through classics like “20 Eyes”, “Mommy, Can I Go Out and Kill Tonight?”, “Teenagers From Mars”, and more. With Dave Lombardo firmly established as one of the best drummers on the planet, the tunes took on an energy that in many ways surpassed the original recordings.

Jerry Only was in rage mode, intentionally destroying several of his bass guitars throughout the night, smashing them onstage and throwing the pieces into the audience. His actions weren’t due to frustration with the set, as the band sounded amazing. Maybe it was pure theater, but perhaps it was Only pouring the anger and missed opportunities of thirty-plus years into a cathartic fit of violence.

Doyle, meanwhile, was a beast onstage. At 55 years old, the dude looks like he could play outside linebacker for the New York Giants right now. He wasn’t so much playing as beating up his guitar, pounding the strings with his closed fist as he stomped across the stage like an unhinged monster. 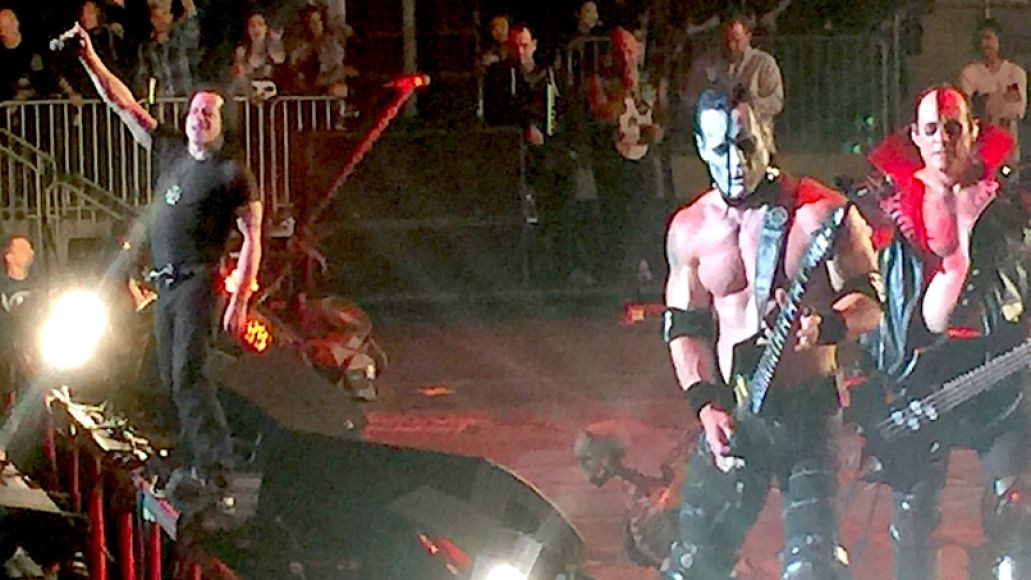 The 27-song setlist was culled mostly from classic albums Walk Among Us, Earth A.D., and Static Age, with tunes such as “Skulls”, “Some Kinda Hate”,  and “Devilock” also among the night’s highlights.

The classic “Last Caress” closed out the main set, with a full arena singing along with some of the most disturbing rock lyrics ever written. Seeing and hearing thousands of people in a basketball arena sing “I got something to say/ I killed your baby today” is a sight to behold. But, as mentioned earlier, this wasn’t an arena-rock show — this was a down-and-dirty punk-rock gig that happened to be in a massive venue.

The night’s most magical moment came in the lead-up to the encore. A woman in a wheelchair was crowd-surfing toward the stage, as the band stood backstage waiting to return for their final songs. She was about 10 feet from the stage when Jerry Only came back out with another one of his impressive knee-slides. Immediately, his eyes locked in with the wheelchair-bound fan, and despite smashing about eight bass guitars to that point, he handed her his bass, fully intact. She lifted it up in the air, as the crowd cheered in approval.

Only ran backstage to get another bass, did his knee-slide again, and the band launched into “Die, Die My Darling”, “Night of the Living Dead”, and “Bullet”. The momentous evening came to an end with Danzig and company delivering a rousing rendition of the anthemic “We Are 138”.

If this was indeed the Original Misfits’ last show, they gave the Madison Square Garden crowd a night to remember. Reviews of their early reunion gigs were mixed, but this one was a pure triumph. People can talk all about how the whole thing came about due to a legal agreement, but this show was about the Misfits delivering a mind-blowing performance on a historic night for the band and its adoring fans.

UPDATE 10/22: Turns out the MSG gig was not the last Original Misfits concert. The band has announced a December 14th show with Dropkick Murphys and Agnostic Front set to take place at Philadelphia’s Wells Fargo Center.

Encore:
Die, Die My Darling
Night of the Living Dead
Bullet
We Are 138

Live Review: Misfits Got Something to Say, Blow Madison Square Garden Away (10/19)