Nick Cave, A Piano, And You: It was too hot for velvet dresses and black sweaters on Monday night in Chicago, but the unseasonable warmth of early fall proved an ineffective deterrent for the crowds that snaked around the outside of Jefferson Park’s Copernicus Center. They’d come to the 1,800-seat theatre for a chance to interact with Nick Cave, the post-punk legend, accomplished author, and gothic elder statesman whose ageless baritone has produced some of the most beguiling, intense music of the last 40 years. His latest tour, dubbed Conversations with Nick Cave, promised attendees the chance to ask Cave anything their hearts desired: What’s PJ Harvey like? Which murder ballad is best? Does anyone still call you Nick the Stripper?

The Red Hand Reaches Out: More than ever, during the last few years of his career, Cave’s been in search of connection. Since sharing his heartache during the exhaustive Skeleton Tree tour with the Bad Seeds (which we described at the time as “a cathartic exercise in community”), Cave has spent much of the last year building upon the heartfelt dialogue with the fans that bore him up after the death of his son Arthur in 2015. Online, that’s taken the form of the Red Hand Files, the epistolary site where Cave answers questions big (“How long will I be alone?,” “How do you deal with evil?”) and small (“Who are your favorite guitarists?,” “What does Elvis mean to you?”) with insightful letters that reclaim the thrill of dialogue that’s largely missing in an age where communicating with your heroes is as cheap and easy as a retweet.

“People have long since stopped really asking questions at all,” he said of the project Monday night. “They just tell me about themselves. It’s pretty fucking extraordinary. I have this access to the minds of my audience, and I think it’s pretty unprecedented thing.” 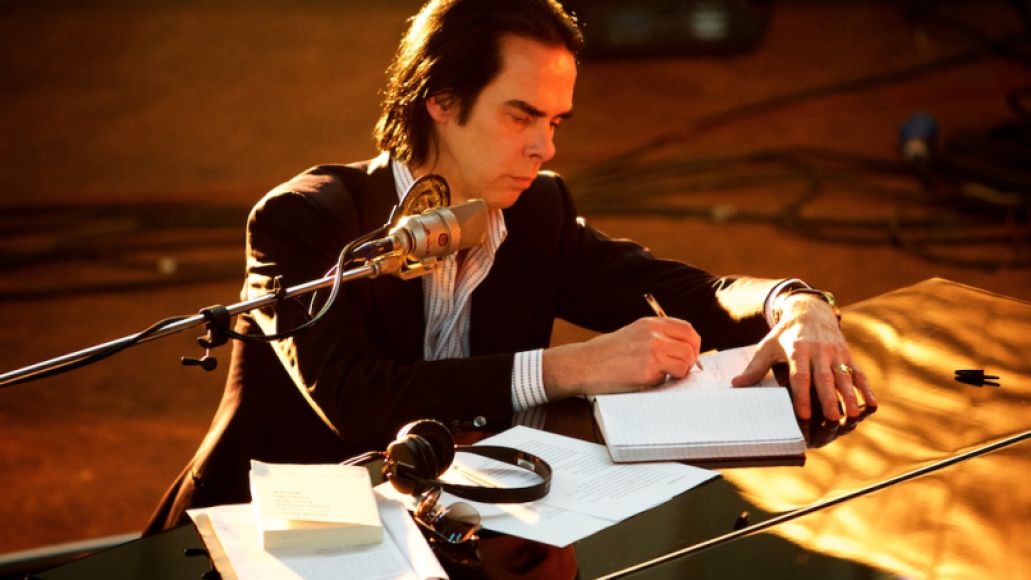 While getting a question answered on the Red Hand Files is a long shot (Cave estimated that he’s received more than 13,000 questions and answered 64), Cave’s current solo performances offer both improved odds and a similar level of intimacy; at the Copernicus Center, candle-lit cabaret tables occupied the space where the Bad Seeds normally roam, wrapping around the solitary piano that Cave retreated to between questions. Literally surrounded by people who adore him, Cave prepared fans for a new kind of concert: part piano recital, part Inside the Actor’s Studio, all in the service of turning fandom into a two-way street.

“This Is Your Night”: Unlike the typical Nick Cave show, the value generated by each stop of these recent tours largely rests on the strength of the audience at hand. There are no pre-screened questions, and the crowds are free to guide the conversation wherever their interests take them. On this particular Monday night in Chicago, Cave was called upon as both a craftsman and a confessor, as audience members sought everything from understanding into his songwriting process to advice on drug addiction and grief to opinions on astrology and free will. More often than not, Cave’s answers contained the same thoughtfulness found in his Red Hand Files letters; during one particularly enlightening exchange, Cave defined himself as an artisan rather than an auteur, and denied using his songs as a means of working through his own feelings.

“It’s like a craft,” he said. “I’m simply doing the job of constructing these things that hopefully will somehow be robust enough to be able to contain your emotions. They’re not something that I’ve invested my own emotions in.” 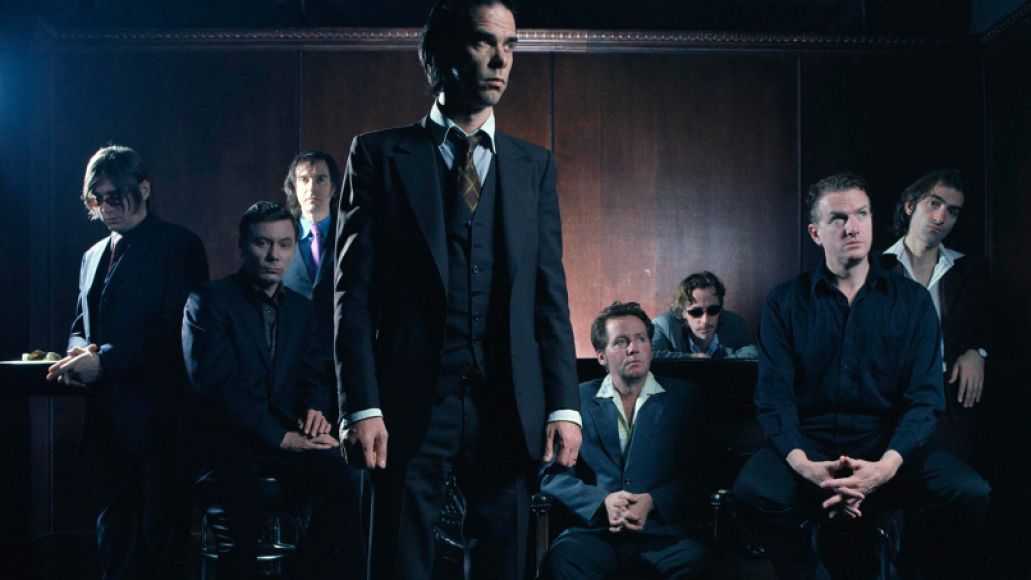 Aside from the insights, there were plenty of moments of indulgence; by the time the night was done, Cave had signed records and tattoos, doled out an on-demand hug, and even defused a fan’s self-described “rant” about the rude chatters seated near her by inviting her on stage for a piano-side serenade of the Bad Seeds’ foul-mouthed take on “Stagger Lee.” Cave honored nearly every request thrown at him with the same preamble: “it’s your night.” That phrase signaled his own bemused gameness, but it was only partially true; it was our night, yes, but it was his, too. After grief tested his resolve, and performance brought him back from the brink, Nick Cave is using the lessons learned to help us all feel a little less alone. The crowd got a moment with their hero, and the hero turned that validation into a community. It’s a feeling best summed up by one of the evening’s shortest exchanges:

“How does it feel to be so loved?” asked one fan.

The Phantom of the Copernicus Center: Though Cave spent most of the night pacing the stage like a professor, he managed to find time to put the stage’s grand piano through its paces. On a night where talk came first and music second, Cave turned in a slim set of just 12 songs (including an encore performance of Let Love In favorite “Red Right Hand”) that somehow still managed to function as a solid survey of his 36-year career with the Bad Seeds. Although he assumed an air of self-deprecation when faced with a question from a piano teacher in the audience, Cave bent the instrument to his will on Monday night, pounding out his signature shadowy ballads with an intensity befitting his reputation. From the noir heat of “Jubilee Street” to the weathered longing of “The Ship Song,” each unadorned performance stripped away the excess and reduced these favorites to their undeniable, smoldering cores.

These sorts of solo tours often find artists dipping back into a catalog of rarities or cult favorites, and Cave indulged a bit, as well; among longtime live staples such as “The Mercy Seat” and “Into My Arms,” the crowd also caught infrequent live performances of The Lyre of Orpheus closer “O Children” and 2001’s “The Sorrowful Wife”, whose spare desperation was made even more pronounced without the Bad Seeds propping it up. One thing fans didn’t get was a sneak preview of Cave’s new album: announced just this week, Ghosteen drops this Friday, and promises a conclusion to the trilogy of albums that began with 2013’s Push the Sky Away. When asked by a fan for a sample, Cave demurred.

“When I sit down and write a new record, […] first of all, it’s really easy. I start writing, and I think, Fuck, this is really easy! And then it suddenly occurs to me that these songs are just kind of residual ideas from the last record. Suddenly, you have to reevaluate everything and change your ideas about what you want to do, and this is always incredibly painful. It happens with every record. That’s why our records continue to be different, and that’s why this new record is different from the last record … and why I won’t play anything from it,” Cave said with a laugh.

“Because it’s just too good!” 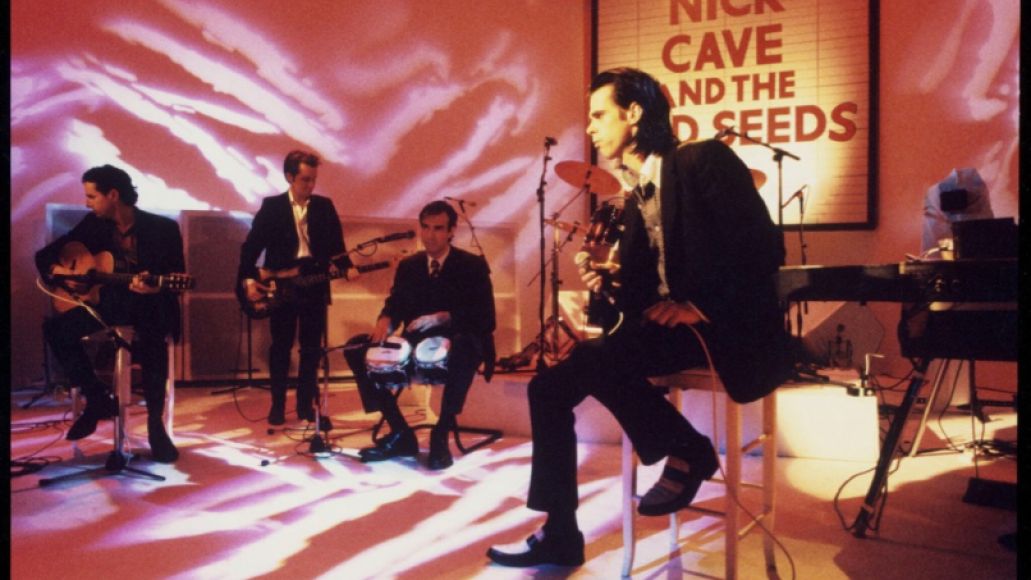 Q&A’s Greatest Hits: Nick Cave answered more than two dozen questions during his three hours on stage at the Copernicus Center. Here are some of his best replies:

On hope: “My son died some years ago, and my tendency was just to wrap myself around the absence of that boy. It was an extremely dark place, but coming out of that darkness, there were moments of momentary light. Moments of hope. Very, very small, tiny moments of hope, and then there was just despair. I say this to everybody, that we must reach towards those moments of light and moments of hope. It feels like we’re living in a world full of despair at the moment, but there is such beauty in the world, and you can accumulate these points of light. The world is an extraordinarily beautiful place that, at this present time, is being devalued in a very upsetting way. You just reach for those little pieces of hope and hang onto them. That’s how you create your life.”

On the Skeleton Tree tour: “Those particular concerts stand out very much beyond all other concerts I’ve ever done in a very, very special way. Something changed in me, in regard to me as a person. It became essential for me to go back out on the road. Otherwise, I just didn’t know what I was going to be able to do with myself. It just seemed like something where I either did it or I just gave the whole thing up. So there was a sort of survival instinct that went into those concerts, and a ferocious need on my behalf. I felt connected to the audience, and I felt that need mirrored the audience, in some kind of way. […] We were all on some level suffering and I really felt that very, very strongly. So there was a kind of a connection with that and a need to transcend that in some way. They were extremely powerful, important, lifesaving concerts for me to do.” 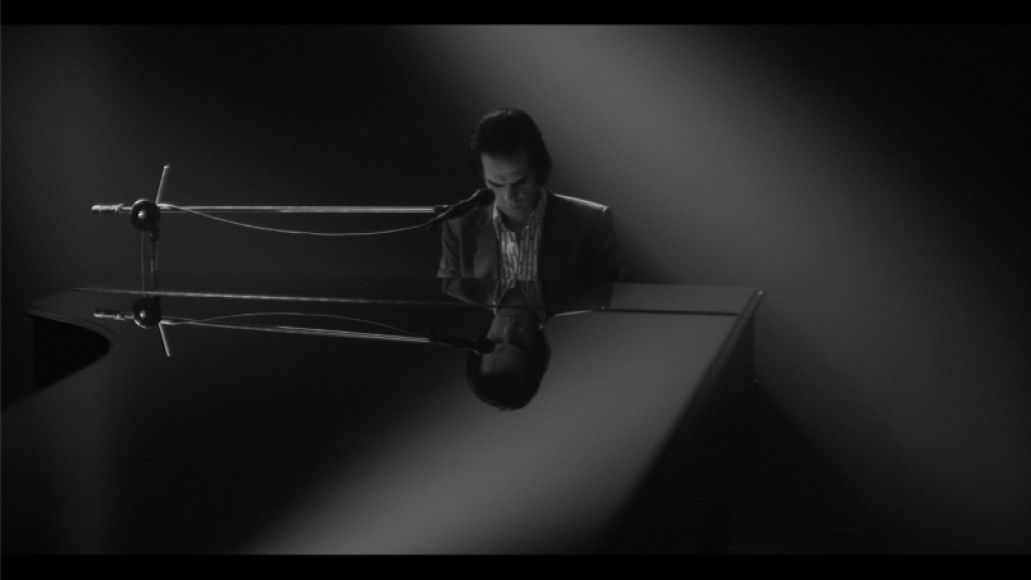 On his un-filmed script for Gladiator 2: “Russell Crowe wakes up in Purgatory, and all the gods are dying because there’s this new man called Jesus Christ who is starting this new religion. And because Purgatory is simply an extension of our imaginations, it was killing off all of the gods, right? So they send Russell back down to Earth to kill Jesus and all of his followers. It was called Gladiator 2: Christ Killer. I handed it in, and Ridley [Scott] really, really liked it, but said ‘It’s not gonna get made, mate.'”

On playing to fail in Melbourne: “I grew up making music in Melbourne with a fundamental understanding that there was no way in the world I would ever make it within music. There was no support whatsoever from the industry. We were a laughing stock in the industry. All of the people who did the sort of music that I did were completely ignored. I just have to say to young people in bands who complain about this: it’s a godsend. It’s a blessing not to have the industry breathing down your neck. You’re just allow to make the kind of music that you’d want to make. There’s enormous freedom in knowing that you’re going to fail.”

On his dogs: “One’s small and looks like a rat, and the other one’s this mopey, doe-eyed thing that looks at me with spiritual yearning. The little rat-like one – I think his prime intention in life is to bite me. He doesn’t seem to think of anything beyond that. His name is Nosferatu.”