Frank Pierce is in hell. He’s a paramedic, and he’s being chased by spirits. One in particular, a young and likely homeless girl named Rose, died of cardiac arrest on his watch. This being Manhattan in the early ’90s, one must unfortunately suspect foul play, maybe substance abuse. But while Frank has lost lives before, and he does understand that 100% salvation in his line of work is impossible, Rose really gets to him. She even manages to summon the spirits of other lives lost amidst Frank’s care. Perhaps now is the time for Frank to confess. Because pride, of which Frank is certainly guilty of by his own admission, is a sin.

Frank is in pain. What will it take to bring Frank to salvation in Hell’s Kitchen? Poe once suggested life and death are both shadowy and vague, beginning and ending with some degree of certainty. Yet a ghost story like the one galvanizing Martin Scorsese, Paul Schrader, Nicolas Cage, and Joe Connelly’s Bringing Out the Dead is chilled and heart-breaking, suggesting that death has a strange way of gnawing at our ability to live. A movie once considered cult within its director’s body of work is aging into one of Scorsese’s most ghoulish epics: a surreal urban dirge on grief, healing, and the crazy shit we need to overcome in order to move on. Perhaps the afterlife is the best medicine.

At the time of its release, Bringing Out the Dead was understandably positioned near After Hours as a New York menagerie with a raging Cage flag pinned atop a pile of divinely deranged characters. It was marketed alongside a wealth of slick pop songs (Scorsese, duh) and jokey one-liners and humorous images like that of Tom Sizemore smashing an ambulance with a bat while a sleepy Cage walks on by unfazed. Right after this bit in ads, there would be a quick cut to Patricia Arquette exclaiming that everyone at Cage’s hospital is crazy. Hey, it was good marketing, and not entirely inaccurate. The movie works like gangbusters as a comedy of rogues. Gassed on a Schrader screenplay, Scorsese makes one nervy, pulpy creative directorial choice after another.

Cage nearly chews on the steering wheel of his ambulance while barking back and forth with his charismatic (read: odd) partners. Ving Rhames pranks a group of punks by suggesting they can bring back their OD’ed friend “I.B. Bangin” with the power of Jesus. There are running gags about an alcoholic bum named “Mr. O” that Scorsese himself narrates in dispatches. A pill-poppin’ drug trip is scored to Van Morrison, Leonard Bernstein, and even “Rang Tang Ding Dong (I Am A Japanese Sandman)” by The Cellos. Marc Anthony performs against type as a junkie with bloody, flailing dreadlocks. At one point, Cage screams at a bum for attempting suicide sloppily, only to then tell the guy to get out of his ride and do it better the next time. Nervous laughter abounds. Comedy is rarely so black.

All of this alone could situate Bringing Out the Dead as a comedy classic of a sort, but Scorsese always has more to offer. More to say, to explore, to try. And what distinguishes this particular film is its spirituality, one semi-divorced from Scorsese’s well-established fascination with Catholicism and guilt. This was Scorsese’s first true filmic foray into the spooky, for Bringing Out the Dead is as much a scary story as it’s a gory New York carnival. It’s a ghost story by any name, but not a low-rent one. Scorsese’s ghosts of Frank’s past possess literary qualities—dismay, manic obsession, violent denial—that deserves further appraisal. Frank Pierce is as wounded as Jake La Motta, or as egotistical as Scorsese’s take on Howard Hughes, but the filmmaker seems keen to torture Frank with something higher and stranger than karma.

Joe Connelly was a paramedic for nine years after dropping out of Colgate, and flooded his novel (on which the film is based) with his eerie insights. The heat of Manhattan in summer, setting people off. The effects of drugs and how many bodies they put into ambulances. Blood, guts, and ennui, all sutured. But in the hands of Paul Schrader, that lapsed Catholic loner with a rivetingly guilty conscience, the onscreen mood becomes one of atonement. Initially, Bringing Out the Dead understands that for a person in the medical profession, there are likely two key modes of operation. Frank is the cool operator, to be certain, but more dangerously he is a self-envisioned messiah.

To the former, the work does have a numbing effect. There’s zero squeamishness allowed for the graphic. Frank is not shocked when, say, a stillborn baby’s legs are left dangling out of a mother’s pelvis, or when a writhing, strapped-down junkie screams at Frank for a cup of water in the hall of the hospital. (Cage, who did the homework and rode around with EMTs, nails the sunken-eyed weariness of this job. He looks skeletal.) But underneath the “seen-it-all” monotony is something much more important to the film’s ethos: pride.

By his own admission, Frank is extremely good at his job. In voiceover, with Cage delivering his lines as though practically on Xanax, he casually boasts, “I was good at my job. There were periods when my hands moved with a speed and skill beyond me, and my mind worked with a cool authority I had never known.” In a way, it is assuring. But the Bible has assured us many times that men who act pridefully, often think they are above God. Again, this tracks in a story like Bringing Out the Dead, but Scorsese and Schrader seem ready to challenge, push back, and perhaps punish Frank. And that’s where the proverbial fall occurs. Frank Pierce falls in line with the troubled men wandering The Raven or The Tell-Tale Heart: sanity and vanity tested, with a conscience ready to be brutalized. 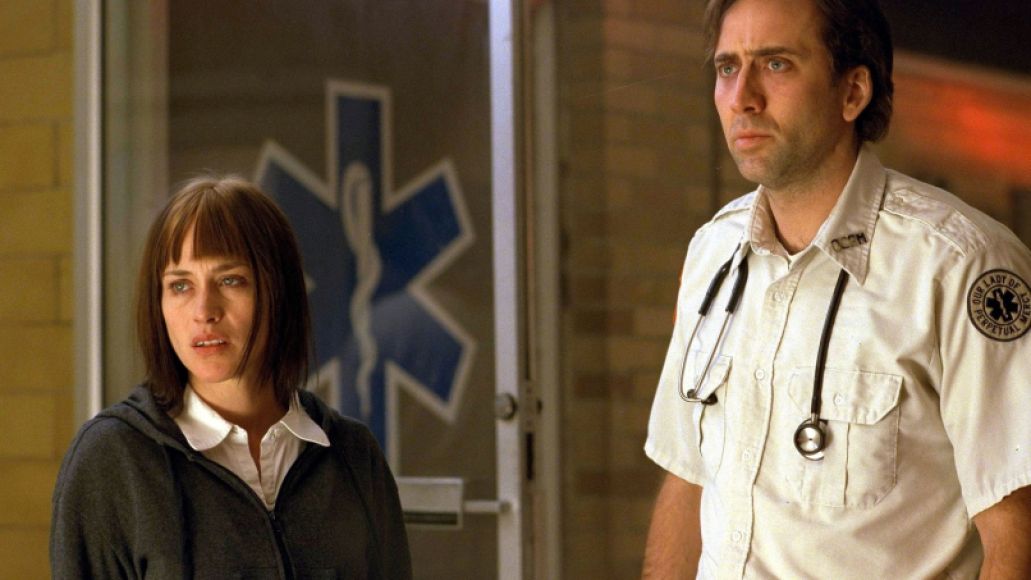 Bringing Out the Dead (Paramount Pictures)

What happens when the confident man loses all confidence? Schrader and Scorsese zoom in on Frank’s authority, exploring what happens to a guy like this when he hits a slump. A lost baby. Rose’s untimely death. Having to give out Band-Aid fixes when real medical needs and victories evade him. And Frank is tortured by the comatose body of an old man he sorta-saves at the beginning of the film. That’s just not good enough; Frank wants this man to live and rebound with vigor, and not vegetate. Frank lives and dies by this balance between, well, life and death. In his 20-minute rides, he can make all the difference in what a stabbing or a heart attack does to a body before it hits the hospital. Still, consider the stats. If Frank misses a defibrillator zap or a suture by a second, or the body he’s tending just refuses his best efforts, he starts to feel more like an executioner.

Cage plunges Frank into an existential crisis of a higher order, and ironically, the famously wild actor is what pushes this movie beyond its surface-level quirks. For all of his modern absurdity, Cage is still a master at rubber-banding. He can rail on a dispatcher with Rickles-like anger, then bring it home with work-a-day weariness. And when Cage works dark, gothic, troubled, well, not to be a sadist but his pain is a Caligarian sight to behold. It’s a shame Cage didn’t work with Scorsese again after this, because his vacillating emotional beats are perfect for the director’s whip-panning tones. Frank is losing it, yes. That’s the first read. An unhinged doctor facing off with the wild nights of NYC. But deep down? He’s running on unbridled, barely inhibited agony.

At one point, Frank decides to accept pills from a seemingly friendly drug dealer. It makes sense. Like laudanum or ether in 19th century literature, some guys have to take red pills to chill the hell out. But the trip is troubling. Frank begins hearing wild music as Scorsese flashes harsh light into his eyes, inviting us into Cage’s hellish reverie. Frank watches himself as he tries to save every last life he’s ever lost, his guilt boiling over. He’s the kind of person wound so tight that even drugs can’t relax him. Then the Rose incident is finally explored in full, and Bringing Out the Dead unleashes its true psychotic power as Frank is totally unable to save her. Even when he’s doing the best he can.

Scorsese employs a number of horror tricks. Reversed footage sends ethereal, lily-white snowflakes falling upward. Hallowed, echoed voices conjure an ambient haunted house. And then, bang. Like a siren switched on, Frank starts screaming. The camera, lingering on Cage’s face with mouth agape, runs away in a panic as he howls in agony. It’s horrifying. It’s upsetting. It’s crystal-clear that there’s no peace in Frank’s future. The black comedy subsides, and Bringing Out the Dead is no longer a hoot. It’s a primal scream. 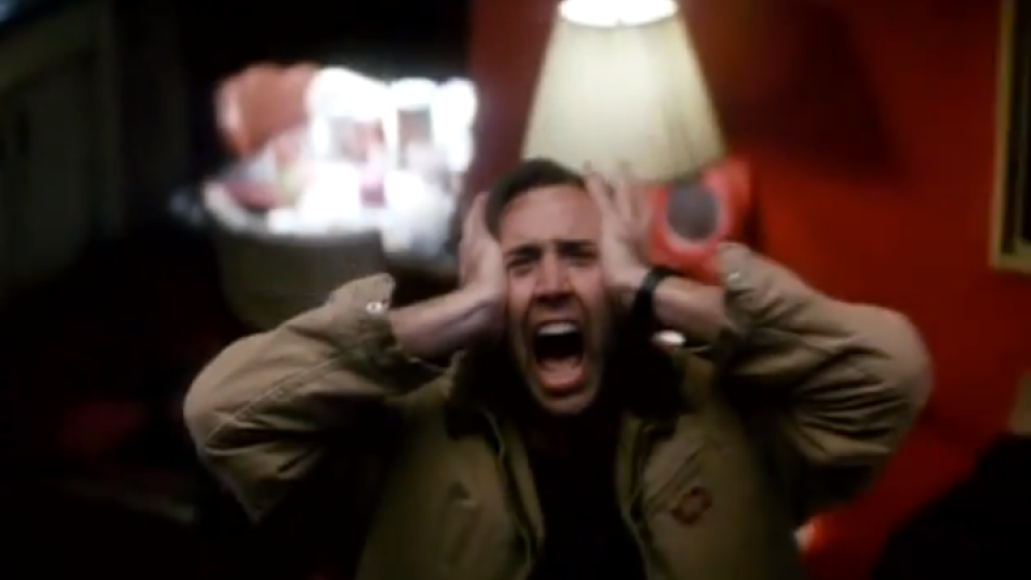 Bringing Out the Dead (Paramount Pictures)

It’s among Scorsese’s most breathtaking and visceral scenes, one that turns a character’s pain and grief outward. A man opened wide, forced to reckon with and acknowledge what’s killing him inside. Some argue that Shutter Island was the point at which Scorsese truly delved into genre filmmaking, but Bringing Out the Dead is an even earlier exploration of horror. It’s a film about the darkest, guiltiest places in a man’s psyche, and while the laughs keep us in the truck, the frightening corners of Frank’s mind endure beyond the film.

All of Scorsese’s film school tricks (high-contrast lighting, a theremin-heavy Elmer Bernstein score, quick editing to create a disillusioned atmosphere) play as thriller-adjacent here, and that’s one of the secret weapons of Bringing Out the Dead. It’s in the acting, the writing, and the mood. Scorsese graduates what could’ve been an extended episode of ER into a master class on sadness. This is a gnarly, bloody, and somehow hilarious curveball from a legendary director, one of his best writers, and a beautifully unhinged star working in American gothic. It’s an oddity and an odyssey, hopefully out of hell.