Steel Panther’s comedic glam metal toes a fine line between parody and art, but not everyone is amused by their antics. That includes Nikki Sixx of Mötley Crüe.

The Crüe bassist slammed Steel Panther after frontman Michael Starr recently joked that if he could bring any musician back from the dead, it would be Vince Neil “from back in the day because that guy is dead.”

In defense of Neil (who is still alive and touring with his solo band), Sixx took to Twitter to express his pointed sentiments on Starr and Steel Panther: “The singer in steal panther [sic] can go fück himself… wannabe band putting down @thevinceneil ?”

Starr’s initial remark came from Steel Panther’s interview with Little Punk People (watch below). When asked which musician they would bring back from the dead to join their band, drummer Stix Zadinia answered in earnest, citing Ray Gillen of Badlands. That’s when Starr took his potshot at the Crue singer, saying, “I’d bring back Vince Neil.” When Zadinia replied with “he’s not dead”, Starr clarified: “I’d bring back the Vince Neil from back in the day, because that guy is dead.”

The feud between Steel Panther and Mötley Crüe stretches back further, when the bands toured together with Def Leppard in 2011. In an interview with Meltdown radio, Steel Panther guitarist Satchel recalled the contempt between his band and the members of Mötley Crüe, who were perhaps offended by Steel Panther’s tongue-in-cheek glam metal.

He added, “I extended the olive branch, I wanted to be friends with them. I think some people feel threatened because we… I think maybe Tommy Lee feels like we’re poking fun at him personally. But we’re just having fun.”

Sixx has adamantly tried to distance himself and Mötley Crüe from the “hair metal” label, once calling it “fake bullshit” after a tour with Poison in 2011. So it’s not surprising that Steel Panther are not up his alley, especially when Mötley Crüe is the butt of their jokes.

Ironically, Neil himself doesn’t appear to have a problem with Steel Panther. “[He] totally loves it,” Starr said in a 2015 interview with The Daily Bulletin. “You know, he told me, ‘Hey, Michael, when we retire, you can have all our fans.'”

Steel Panther are currently on the road in support of their latest album, Heavy Metal Rules. Tickets are available here.

The singer in steal panther can go fück himself… wanna be band putting down @thevinceneil ?

That’s why they are assholes. Backstabbers. 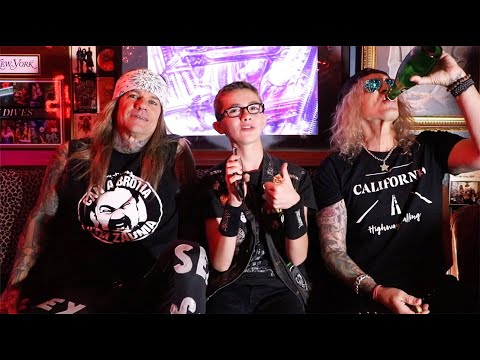