It’s hard to believe that it’s been three decades since Marge Simpson first stepped out from behind that curtain to warn viewers about the spooky scenes they were about to witness. Yet that warning started a proud and hilarious tradition for The Simpsons, and 30 seasons later, the show has offered a triple-dose of tales to fright and delight each year.

The Treehouse of Horror Halloween specials allow The Simpsons to spoof classic movies, indulge in a little blood and guts, and have some macabre fun in a non-canon setting. With that in mind, we found the courage and chutzpah to watch and rank each and every one of these scary stories, and we hope you can handle it.

Otherwise, you may be stuck watching 200 Miles to Oregon. 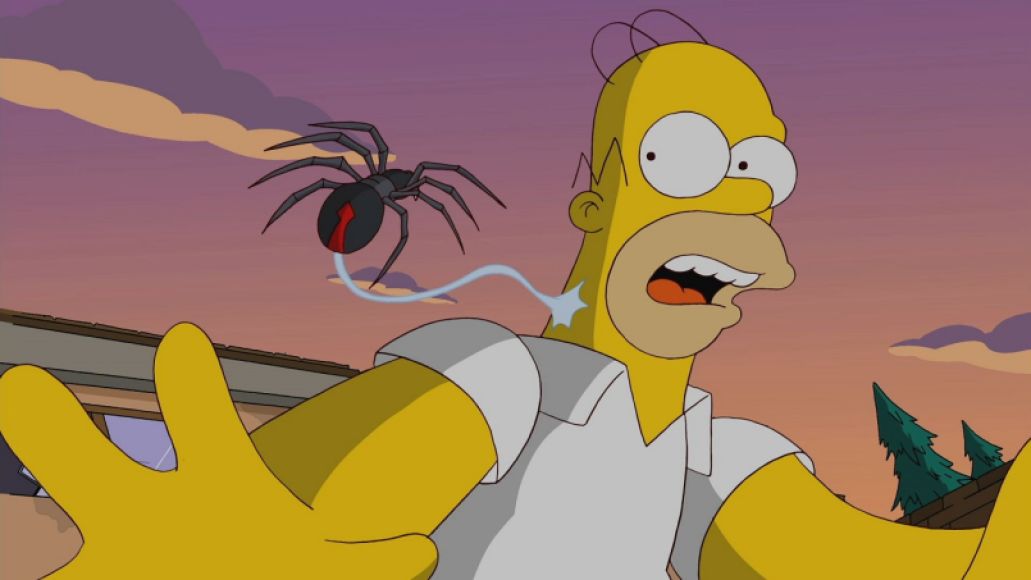 Best Line: “I take your sugary sweets and give you healthy items…” –Marge “This is exactly why kids need a union.” –Bart

After rallying for a genuinely great 20th edition of their annual Halloween frightfest, The Simpsons entered into a steep autumn stall that wound up being scary for all the wrong reasons. The show’s Treehouse of Horror series hit its nadir in 2009 with this dog of an episode that’s already stale enough to feel twice as old as it actually is. There’s something to hate in just about every segment (including the dull two-years-too-late Avatar bit and a Dexter-inspired Flanders story that wastes a good premise on a predictable Dumb Homer payoff that’s shockingly similar to the one feature in “Treehouse of Horror XV”‘s “The Ned Zone”), but the worst offender is the first. Building an entire segment around crummy fart jokes is one thing, but “The Diving Bell and Butterball” doesn’t even have the decency to stay focused on its own bad idea. Instead, it swerves into a half-baked Spider-Man send-up, completing a trifecta of worn-out parodies that sink far, far below the standards set by its source material. –Tyler Clark 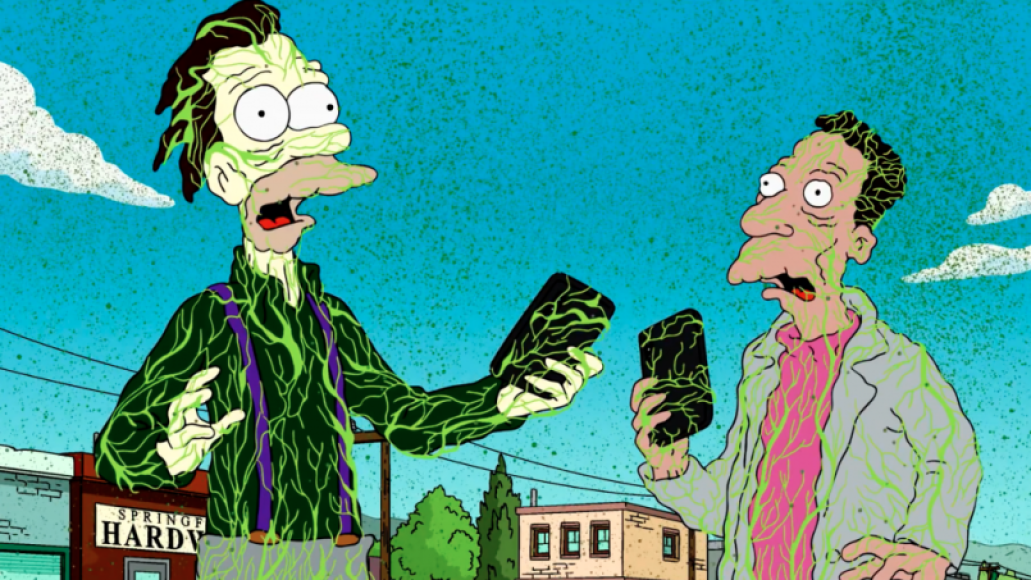 Best Line: “An eating contest against the monstrous Cthulhu? To him, the Great Barrier Reef is just an average barrier reef.” -Unnamed sea captain

A regrettable trend of latter-day Treehouse of Horror installments continued in 2018. Much like 2008 and 2015 before it, this episode’s high point comes during the opening gag, in which Homer bests Cthulhu himself in an oyster-eating contest held in the suitably spooky New England hamlet of Forgburyport (“Birthplace of Green Clam Chowder!”). Five more minutes spent dunking on grim-faced Yankee weirdos might’ve been fun; instead, we got what follows. The episode’s worst segments do their source material a disservice: “Multaplisa-ty” goes through the motions with a belatedly lukewarm rehash of M. Night Shyamalan’s surprise 2016 smash Split, while “Intrusion of the Pod-Y Switchers” squanders the series’ return to classic horror by shoehorning in social commentary about self-absorbed tech users that would’ve felt banal 15 years ago. Only “Geriatric Park”, and its tale of the dinosaur-ification of Springfield’s oldest residents, manages a few chuckles and even fewer scares. If two out of three ain’t bad, what do you call one out of four? –Tyler Clark 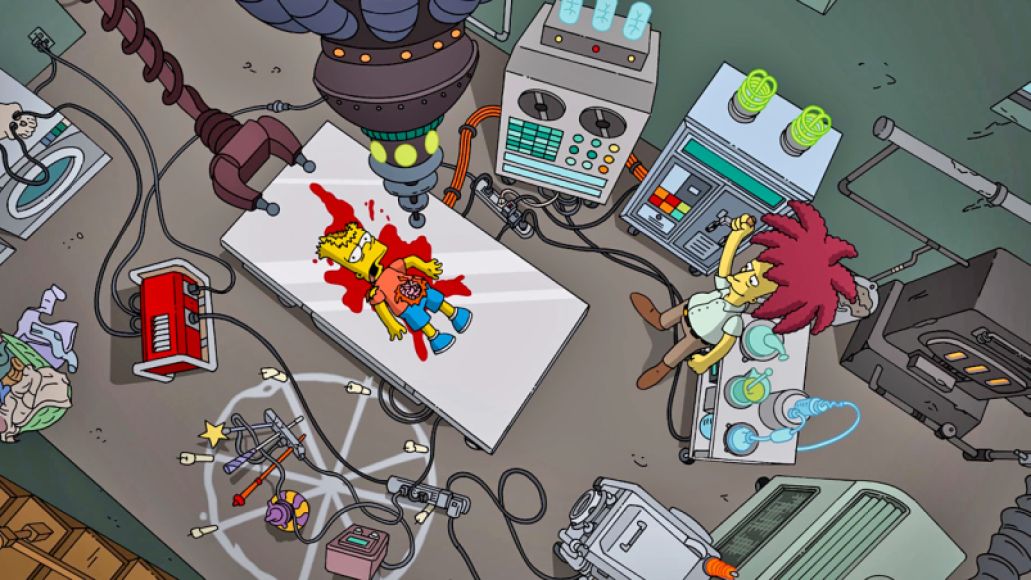 It’s a shame when the best thing an episode has to offer is a two-minute intro created by a guest contributor, but for this installment, you can probably change the channel after John Kricfalusi’s characteristically loopy, spooky prelude. What’s unfortunate about this episode is that all three segments feature solid premises done in a less-than-inspired fashion. “What if Sideshow Bob finally killed Bart?” is a fun idea that could only be explored in the “what if?” confines of a Simpsons Halloween special, but it gets bogged down in meta gags and quickly spins out. The Godzilla parody starts out as a charming companion to “King Homer”, but then devolves into a toothless riff on Hollywood’s reboot-happy corporate culture. And a Chronicle spoof is a natural fit for the Simpson kids, with the found-footage style allowing for some unique animation choices, but it’s just too rushed to leave any impact. –Andrew Bloom 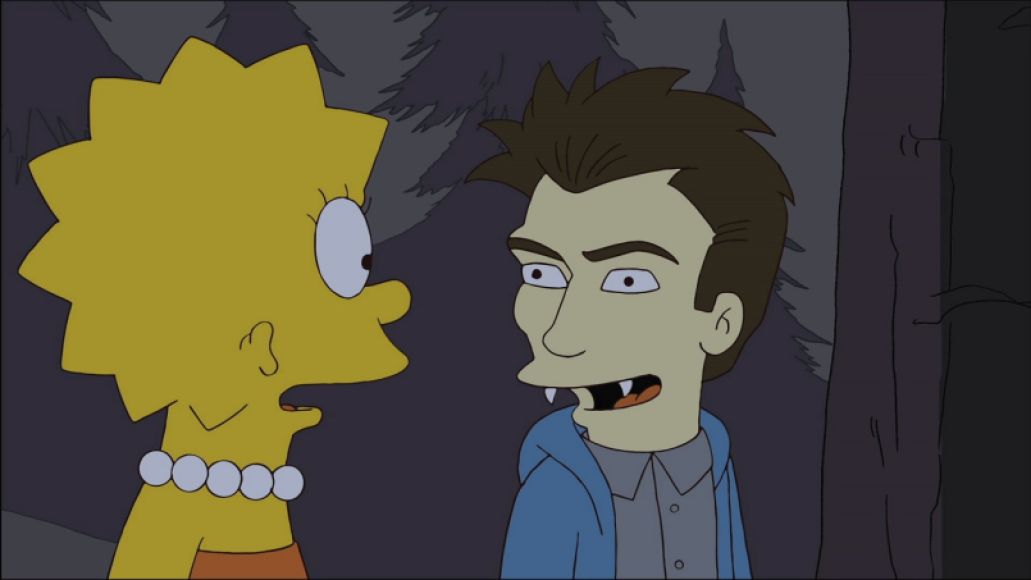 In recent years, The Simpsons’ writers have come to heavily rely on whatever the moment’s most popular franchises might be. In “Treehouse of Horror XXI”, the bottom of the barrel is repeatedly scraped for a trio of segments inspired by Twilight, the 1989 Australian thriller Dead Calm, and yes, the fictional board game Jumanji. While “Tweenlight” at least does a bit of clever genre swapping by using the voice of Harry Potter’s Daniel Radcliffe as vampire hunk Edmund, it’s hard to spoof something that is itself a joke. Likewise, “Master and Cadaver” misses a chance to go full House M.D. in a story featuring the voice of Hugh Laurie. There’s some enjoyable nostalgia at seeing childhood board games come to life and wreak havoc, but it’s not enough to make “War and Pieces” a worthy successor to its much better precursor, “Attack of the 50 Foot Eyesores” from “Treehouse of Horror VI”. –Zack Ruskin 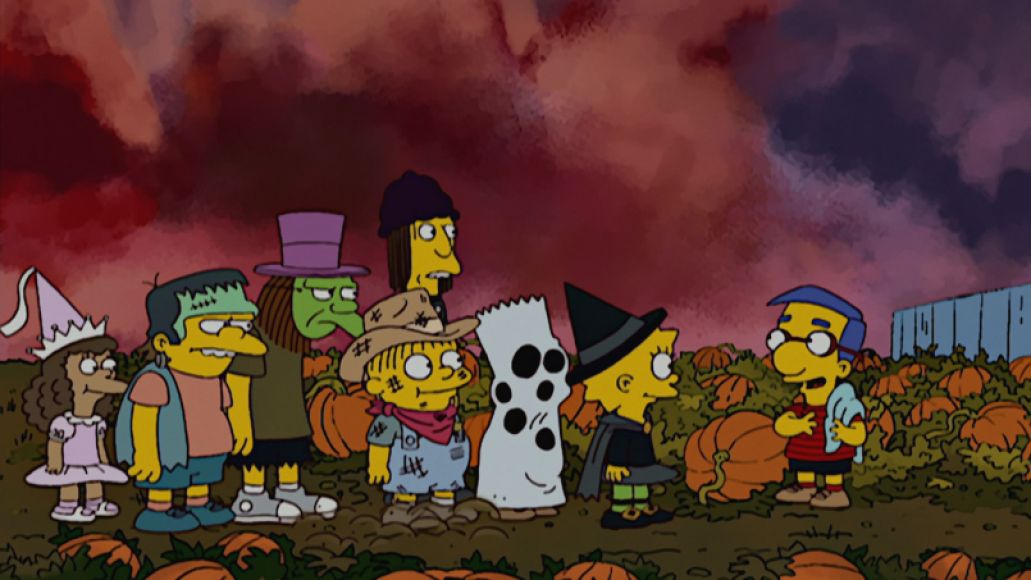 Once more a two-minute opener, this time lightly riffing on the 2008 election, proves to be the most amusing part of a half-decent-at-best Treehouse of Horror installment. Homer’s ill-fated attempt to vote for Obama (and warn “President McCain”) brings the laughs before the episode starts in earnest. A Transformers parody kicks the trilogy off, and it’s a story with no middle and no real take on the source material beyond some easy gags. The middle act imagines Homer as a celebrity assassin for an ad agency, with the denizens of “Celebrity Heaven” returning to this mortal coil for some payback. Sadly, it’s mostly an excuse to trot out impressions and one-note jokes. But the best segment is the last one, which can coast on the stylistic trappings of borrowing from It’s the Great Pumpkin, Charlie Brown and its Guaraldi-backed charms, as “The Grand Pumpkin” seeks revenge on humans for their gourd-gutting ways. –Andrew Bloom 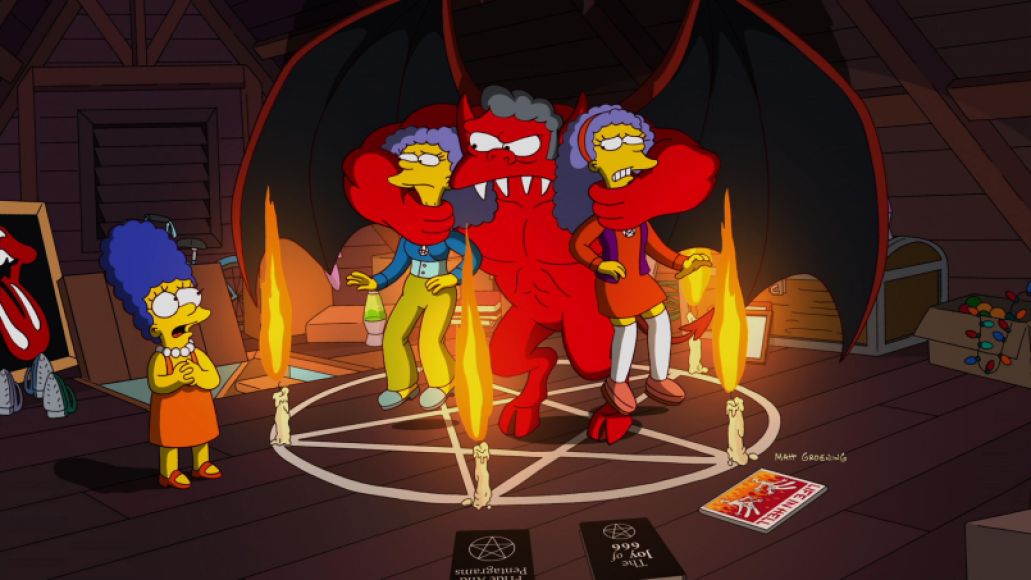 Best Line: “Oh sweetie, sometimes a mysterious invisible being from hell waits for a family to go to sleep and kills them. Now go to bed.” –Homer

While “Treehouse of Horror XXIII” takes on both Back to the Future and Paranormal Activity, it is actually a segment involving a rogue black hole that is easily the best of the bunch. “The Greatest Story Ever Holed” features Lisa stashing a black hole created from Springfield’s Subatomic Supercollider in her basement after it starts sucking up everything in its sight. Little does she know that Homer has agreed to let the entire town throw their trash into the galactic anomaly, which of course becomes unstable and devours Springfield. Another highlight is the ending of “Unnormal Activity,” which finds Homer engaging in three-way with two devils that almost at once scream the safe word (which of course, is “cinnamon”). “Bart & Homer’s Excellent Adventure” is mostly a miss but does feature Marge confusing Caveman Homer for Renaissance Homer, and a room full of Homers nominating Egyptian Slave Homer to take out the garbage. –Zack Ruskin 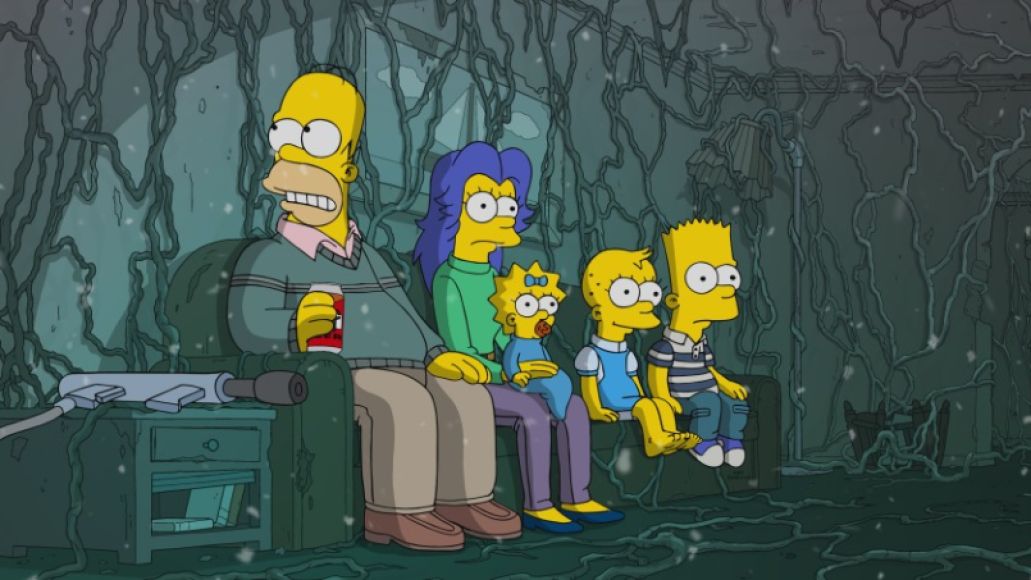 Best Line: “Still better than a boy.” – Homer, upon learning that Maggie is the antichrist

What does it say when the first two minutes of a Halloween episode are miles better than the next 20? Suffice it to say, the opening riff here, featuring a malevolent Maggie (a la The Omen), packs in more laughs, more over-the-top cartoon violence, and more amusing digs at The Simpsons’ new corporate overlords than anything that follows. Sadly, the episode proper begins and ends with a pair of toothless pop culture parodies. Whatever the show gains in timeliness with its spoofs of Stranger Things and The Shape of Water, it loses in lacking a real take on the material or any particularly clever way to integrate Springfield’s residents into it. The most creative segment is the middle one, which sees a deceased Homer possessing human hosts via a heavenly Tinder app, but even that offers mixed results. The Simpsons‘ 30th Treehouse of Horror special (and 666th episode) gamely tries for some spooktacular fun, but unfortunately peaks with its first step out of the crypt. –Andrew Bloom 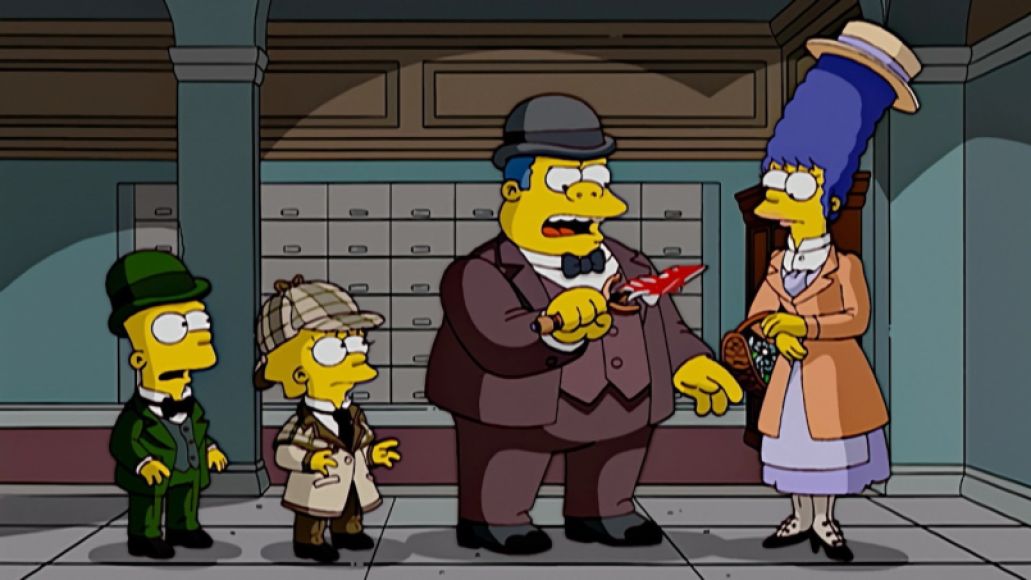 Best Line: “You may examine my curios, but do not touch my oddities. Use your judgment with my gewgaws.” –Comic Book Guy

I’m a known sucker for any story that places the Simpsons gang in a historical or mythological setting, so “Four Beheadings and a Funeral” is tailor-made to my own weird proclivities. It’s also the highlight of this episode; whether it’s Homer using opium addicts as projectile weapons or Comic Book Guy chewing up his scene as a weirdo oddities merchant, the middle segment of “Treehouse of Horror XV” achieves that quality combination of inventive irreverence and faithfulness to the source material. Aside from zhooshing up Arthur Conan Doyle, this episode doesn’t have a lot to offer; both “The Ned Zone” and “In the Belly of the Boss” tread oft-trod fantastical landscape (in this case, the Cronenberg/Walken freak-out The Dead Zone and vintage sc-fi adventure Fantastic Voyage, respectively), but never quite add enough of The Simpsons‘ unique perspective to make these settings their own. Ultimately, they wind up as by-the-numbers retellings of stories we all know, which isn’t necessarily bad, but also isn’t necessarily interesting. –Tyler Clark 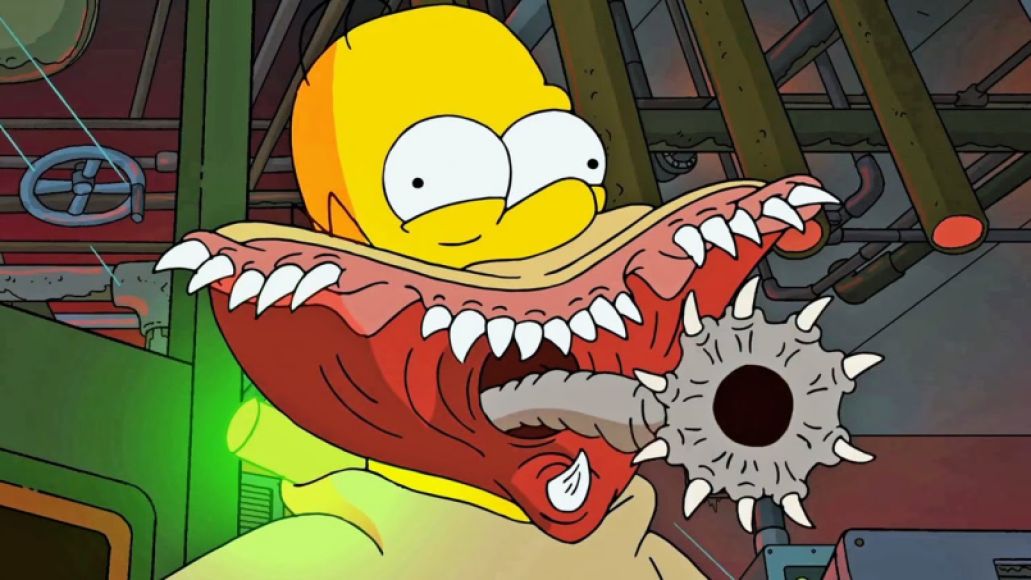 Best Line: “Now hop on my cycle, there’s nothing to fear. And we shall have candy…and maybe some beer.” –Homer

The best thing “Treehouse of Horror XXIV” has to offer is its extended couch gag created by horror virtuoso Guillermo del Toro. Featuring a Simpsonized take on a variety of del Toro’s own films and dozens of other scary classics, it’s a perfect blend of styles and tribute to all things macabre. The first full segment is a grab bag of enjoyable Seussian doggerel, less a story than a loose collection of riffs on the children’s book classics in a Halloween guise. The second sees Bart’s head sewn onto Lisa’s body, with a series of weak jokes spinning off that solid promise. And the last and best segment is a takeoff on the movie Freaks, centered on a love triangle between Strongman Homer, Acrobat Marge, and Freakshow (i.e. normal) Moe, which earns points for its sepia-toned style and fidelity to the 1930s original. –Andrew Bloom 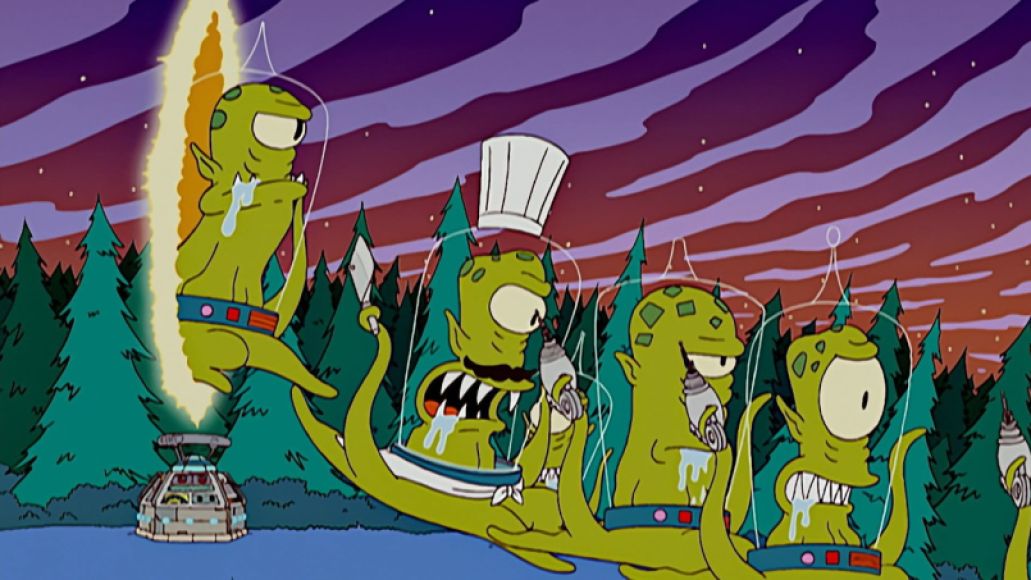 Best Line: “You just can’t get Russian gangster blood out. Must be something they eat.” –Marge

In one of the more memorable openings for the latter Treehouse of Horror installments, The Simpsons riffs on the obnoxious advent of TV ads that appear from the corners of the screen. In this case, Marge grabs tiny versions of characters from shows like 24 and American Idol and bakes them into bread. “E.T. Go Home” brings frequent Treehouse of Horror cameo character Kodos into a more substantial role but offers few real laughs. “Mr. & Mrs. Simpson” is another of the moment parody for the series that has failed to age well. However, “Heck House”—a spoof of Seven that returns friendly Christian Ned Flanders to his rightful place as Lord Satan—is definitely a winner. We even get yet another Groundskeeper Willie death, this time via tractor decapitation. –Zack Ruskin 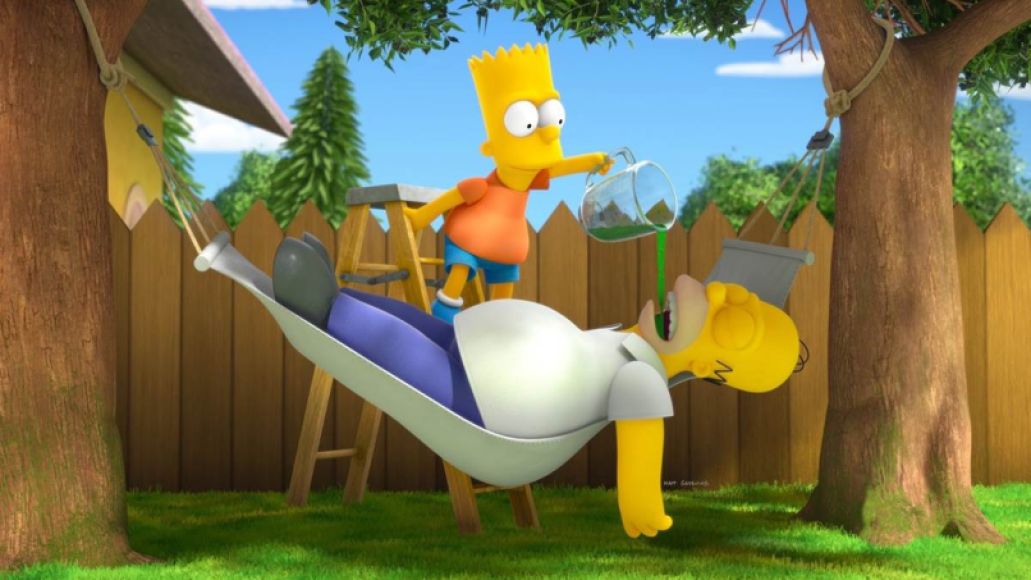 With this entry, enterprising Simpsons fans can officially watch a Treehouse installment for every day in October. The episode itself doesn’t quite rise to the level of that lofty milestone, but at least shows some ambition in its choices. The opening skit riffs of apocalyptic fears over the 2020 election with a touch of bite. The first full segment spoofs Toy Story, imagining a grimmer fate for Sid the toy abuser and reprising The Simpsons’ CGI makeover from “Treehouse of Horror VI”. The middle segment parodies Into the Spider-verse with a heap of random jokes built around different versions of Homer (the funniest being a series of homages to classic Hannah Barbera characters). And the final segment plays on Russian Doll and other grim Groundhog Day-type films via Lisa. Most of these bits play more like a loose series of so-so gags than complete stories, but at least The Simpsons can boast some creativity in what it attempts to tackle with its grand thirty-first visit to the Treehouse. –Andrew Bloom

Ranking: Every Simpsons Treehouse of Horror Halloween Episode from Worst to Best