Following up a $100 million Star Wars movie with a light-hearted, mid-budget throwback to the works of Agatha Christie doesn’t feel like a conventional move for most filmmakers. Luckily, Rian Johnson isn’t like most filmmakers: the 45-year-old writer/director has long managed to subvert expectations with challenging, controversial works, regardless of their accessibility or price point (if you think Last Jedi discourse ruffles some feathers, just say the word “Fly” around a Breaking Bad fan and see how they respond).

Love them or hate them, Johnson’s works are often deeply indebted to genres and filmmaking traditions of the past, but with a few novel, contemporary tweaks. Think Brick‘s high-school neo-noir or Last Jedi‘s gleeful bucking of franchise norms. His latest, the uproarious whodunit Knives Out, is an ode to old-school murder mysteries with absurdly stacked A-list casts — the tale of dead mystery writer Harlan Thrombey (Christopher Plummer) and the cutthroat family members who might have done him in. This includes character actor extraordinaire Michael Shannon as Thrombey’s embittered son Walt, who paints himself as the reasonable member of the family but has some skeletons in his own closet.

In the wake of Knives Out‘s packed, exuberant screenings at this year’s Chicago International Film Festival, Consequence of Sound spent some time with Johnson and Shannon at a tiny suite in the Peninsula Hotel, commiserating over a package of convenience-store donut holes we brought for the occasion. (Their significance becomes clearer after you’ve seen the film.) Together, we talked about everything from the appeal of making an old-fashioned whodunit to Trump-era class tensions to the ongoing discourse about whether Marvel films are Cinema(tm). 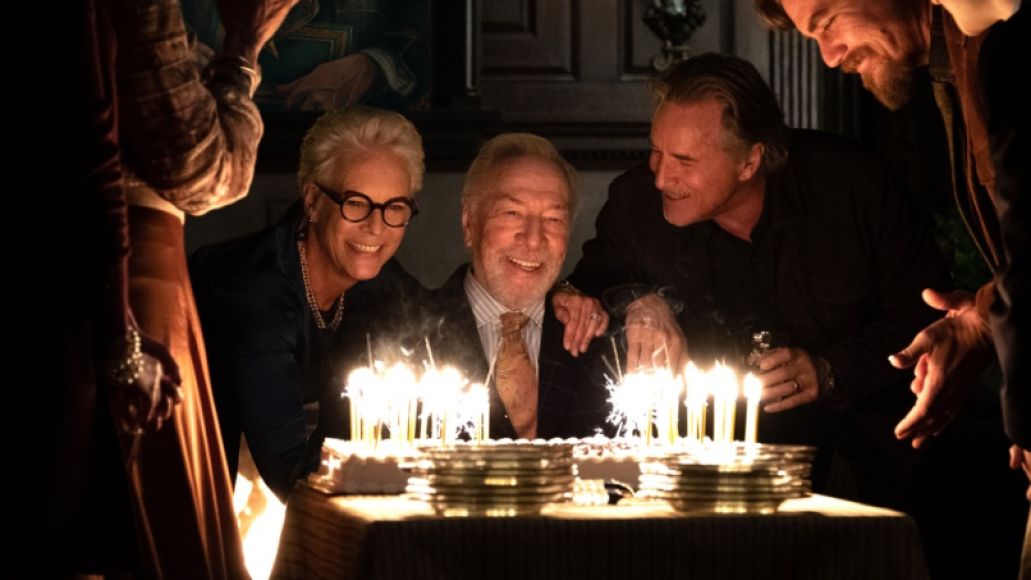 On making a murder-mystery movie after The Last Jedi

Rian Johnson: Well, this was just the next thing I was excited about. I’d wanted to do a whodunit for years and years; I just grew up reading Agatha Christie books and wanted to do that genre. I had the basic idea for this about 10 years ago, so this has been cooking for a long while. It wasn’t anything specific about coming out of Last Jedi, it was just the next thing.

On the difference between noir (Brick) and whodunits (Knives Out)

Johnson: It’s fun to me, just the difference between the noir genre and the whodunit. I mean, moral clarity is sort of the dividing line between the two of them: it’s all about the moral murkiness with noir; with a whodunit, it’s always really clear. That’s kind of what’s comforting about it — the detective comes in and always sorts it out.

Michael Shannon: It was pretty surprising – you show up at work, and there’s James Bond and Captain America in the same movie. And then there’s Jamie Lee Curtis and Don Johnson, people I’ve admired since I was a kid, you know? It was kinda like going to Madame Tussaud’s. 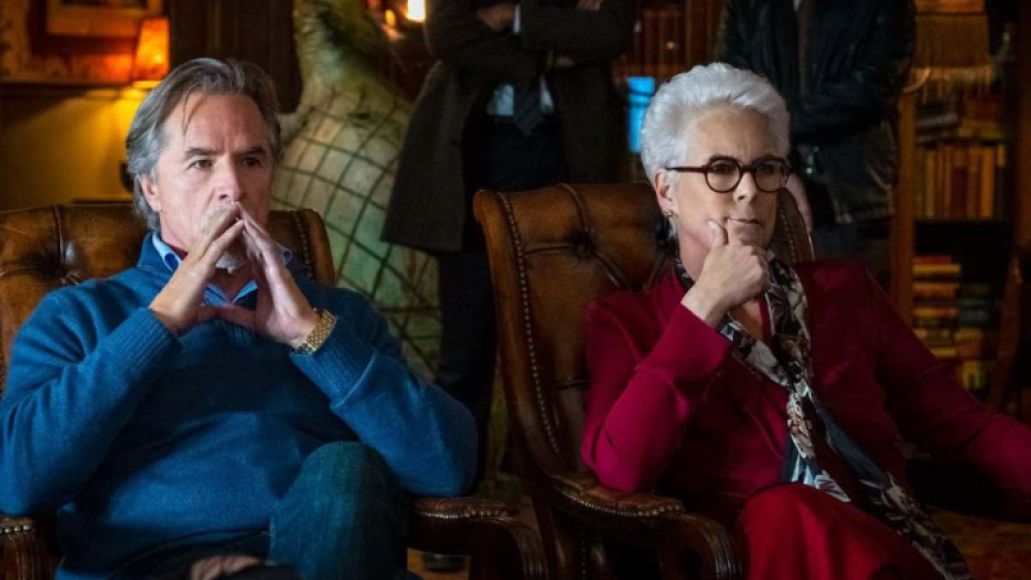 Shannon: Oh man, that boot was a pain in the butt. I was worried about my alignment. I’m already kind of asymmetrical to begin with. But no, it’s a lot of fun to relish in that [affectation]. Walt’s kind of a barely functional guy, so this physicalization or manifestation [helped out].

On diagramming the intricate plotting of Knives Out‘s whodunit story

Johnson: Oh, I have no organic flow; anytime I write anything, I have to diagram it all out and have it all planned out, especially something like this. You just start really broad, with the dramatic shape of it, and then you fill in the details. Most of the work goes into making sure it’s simple enough to where, for the audience, it’s a rollercoaster ride, not a math problem.

On whether he had alternate endings in mind

Johnson: As Hitchcock said, “please don’t spoil the ending, it’s the only one we’ve got.” So that was it from the start. 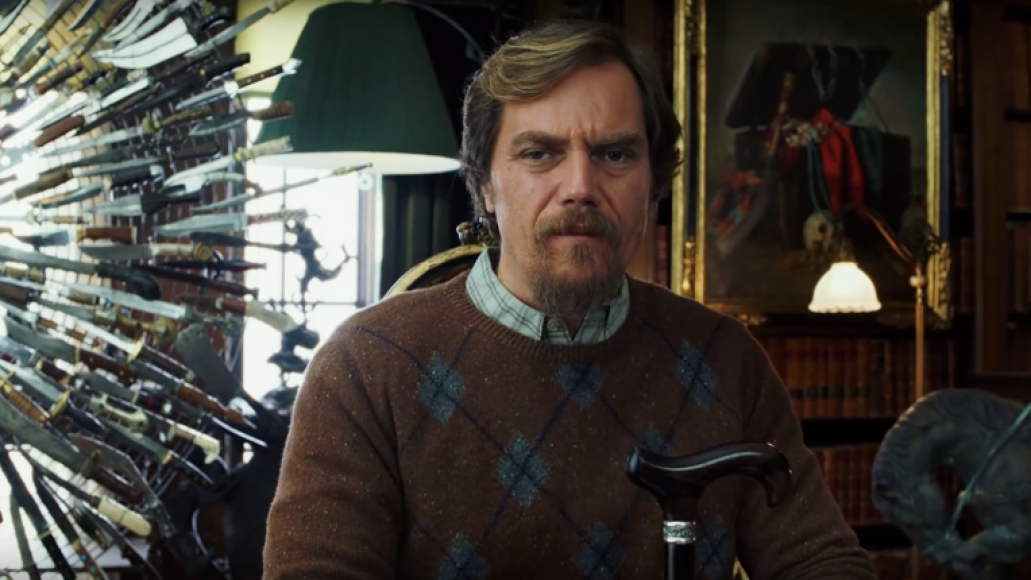 On playing up Walt’s likelihood as a whodunit suspect

Shannon: That’s an interesting question. More than anything, you just try to play each scene for what it is, and not think about the whole superstructure of the thing. Just be in the moment and focus on the relationships. ‘Cause you can’t — yeah, I think about as plot as little as possible when I’m working. I just try and focus on the people I’m in the room with and the electricity, or lack thereof, between us.

On where he felt that electricity most

Shannon: I love the big family scenes, when we’re in all the room; they felt pretty authentic, you know? It’s kind of a weird thing to do with a bunch of strangers, just pretend that you’re family. Jamie [Lee Curtis] was really warm and kind, and really attached to the house, and the notion of us being a family. She would never go back to her trailer; she would sit in the kitchen with the owners of the house, and talk about the history of the house. Just very invested in creating this atmosphere, and we all took her lead, you know?

On designing and conceptualizing the house

Johnson: It was sort of supposed to be the murder mystery mansion of the mind. The whole reason we went to Massachusetts was that we found that house. We scouted early, and we found this place, and we were just like, “It’s perfect.” We shot on the inside and outside of it. And the other huge ingredient was our production designer, David Crank, who’s a genius. He and his team filled this house up with all of the stuff that you see in the film – all the tchotchkes, all the automatons, all the artwork. David Schlesinger was our set decorator, or I forget what his exact title was, but he’s the one who found all that stuff. The house is great, but it’s really all the stuff inside, the way that they dressed it, that gives it that feel.

On the film’s exploration of Trump-era politics, and whether they feared (or hoped) that those moments would dissipate by the film’s release

Johnson: I was praying that I’d have to cut a few scenes ’cause they’d feel dated [laughs]. That would have been nice.

Shannon: And I remember [Rian] saying that this movie was specifically designed for Thanksgiving. Families should go there after they have their turkey, and it can be kind of maybe cathartic or something.

Johnson: Fight with your family, and then you can go see a family fight? But you can laugh at that version. I know for me, that sounds good. 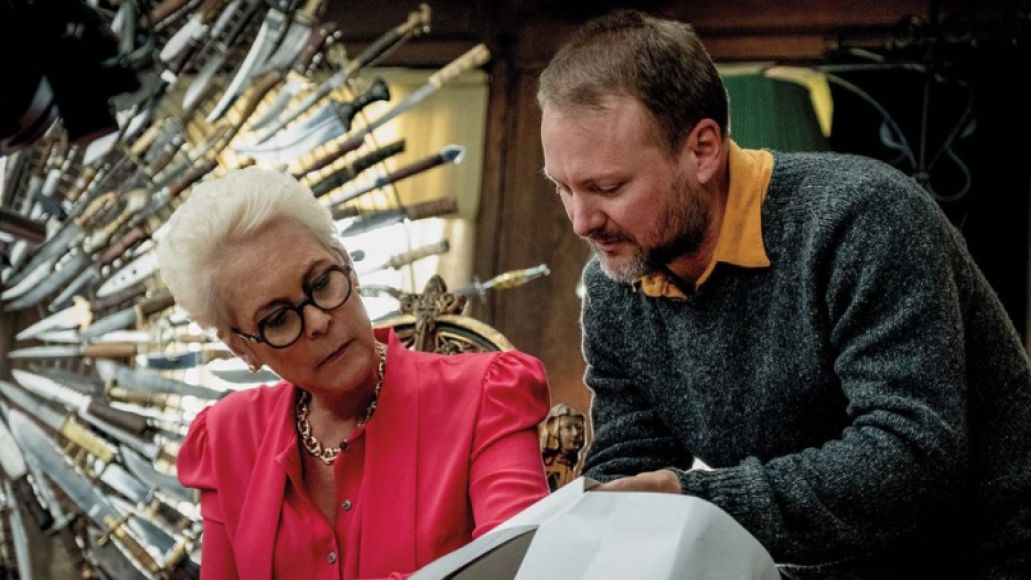 On the recent Scorsese/Marvel dustup, and the question of superhero movies as cinema

Johnson: Obviously, I love original stuff, and I also love the big stuff. I enjoy both of them. But I think cinema’s something different for everybody. This is the dumbest thing to have to say out loud: different people like different stuff! It’s fine! [laughs] And fuckin’, Martin Scorsese is allowed to like and not like whatever the fuck he wants, stop yelling about it! Jesus. Well, not everyone has to like everything. So let’s take a breath.

Shannon: I just get scared with all the big mergers and stuff. Like Fox/Disney and all that. To me, it’s not about what kind of movie people wanna make, it’s about what kind of movie are you still able to make. I just don’t want to get to the point where a movie like this — a mid-range, not huge studio, but decent movie [can be made]. I want there to be some middle ground between $100 million and $500,000, you know.

On the passing of the late, great Robert Forster, and working with him on 2018 family drama What They Had

Shannon: Like I said earlier, talk about running into a bunch of strangers and whipping up a family out of nothing. But yeah, he was such a kind man, so thoughtful. And at that point, he’d started to struggle with retaining the lines, which happens to everybody as you advance in age and whatnot. But he just felt like… our dad, you know? And he was so invested — not just in the movie, but we would talk about career stuff. I was trying to figure out what I was gonna do, and I’d come to him, he’d chew it over. He’d be like, “oh, that’s so exciting!” He had so much enthusiasm.

It was interesting to talk with him about it, because this was a guy who started strong and then had kind of a murky period, and had to come back. He just hung in there, you know. He never gave up. Robert Forster was a great role model for actors about how to treat people, and how to appreciate what you’re doing. 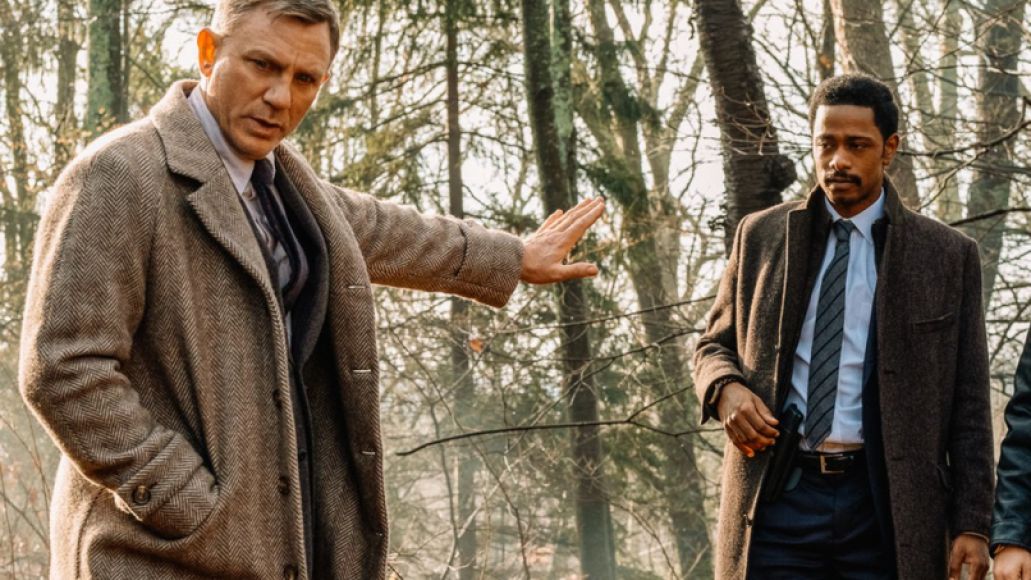 Johnson: What is ben wa balls? I don’t….

On whether he’d do more “Benoit Blanc” films

Johnson: I never thought about sequels to my own movies, but this… I wouldn’t think of it as a sequel, even. I had so much fun making it, that’s the thing, you can do new mysteries and everything. So yeah, the idea of hatching a new one of these [is appealing].

On why audiences delight in rich families squabbling with each other

Johnson: Well I mean, there’s a lot in the air right now in terms of the growing divide between haves and have nots, so that’s kind of out there. You can feel that in a lot of movies right now. Movies respond to the culture they’re in; they respond to what’s on people’s minds. For me, it was doing a classic whodunit, but truly setting it in today. To me, that meant not just giving it a modern skin, not just giving everyone cellphones, but that meant doing what Christie did in her time — plugging into what people are arguing about with their families, what they’re talking about, what’s on everyone’s minds. The movie absolutely attempts to plug into that.