Setting the stage: The warehouse venue Brooklyn Steel is usually reserved for loud rock shows, but it became a cold chamber of intimacy for Chelsea Wolfe’s acoustic “American Darkness Tour” on Friday. The singer-songwriter is out in support of her latest album, Birth of Violence, a downbeat doom folk record befitting of a sparser, minimalist live interpretation. Wolfe usually tours with a full band, but for her current run of dates, she brought only her acoustic guitar and one side-musician, relying on the strength of her compositions and voice to carry the songs. Wolfe’s Sargent House labelmate Ioanna Gika provided support, conjuring a similarly brooding atmosphere.

Taking the stage: Gika opened the concert performing selections from her debut album, Thalassa, which came out in April. Under dim lights, her blonde hair and white dress shined through the darkness of the stage. A cellist and keyboardist flanked her on each side, creating cascading drones over which Gika sang brittle melodies in the high register of a mythical siren. Glitch percussion and gentle pulses of noise paced the songs with the unexpected. She appeared comfortable amidst the shadows, projecting the beauty of her voice in contrast with the sorrowful tones of the cello and the minor keys of her compositions.

From Gika’s set onward, the venue was permeated with a hazy melancholy. Perhaps it was the Halloween hangovers of the audience members or the droning melodies of the performers, warranting a theater setting rather than the standing-room cavern of Brooklyn Steel. As Wolfe began her set, one member of the audience collapsed and had to be carried out. Plumes from the fog machine filled the air, cut through by a decadent light show that kept the eye moving despite Wolfe’s static pose mid-stage, surrounded by a ritualistic crown of antlers, designed by artists Ceremonia and Jean-Michael Barbe. She donned a white Victorian gown, shoulders exposed.

From the opening notes of “Flatlands”, it became immediately apparent that the acoustic treatment suited Wolfe’s songs perfectly. Stripped down to their core element of chords and voice, the songs bloomed under Wolfe’s power as a gifted singer-songwriter. “Birth of Violence” and “Be All Things” revealed themselves as plaintive slowcore ballads, as Wolfe’s lyrics become the primary focus. Her recorded output is often steeped in sonic aesthetics that lend to gothic rock and dream-pop comparisons, but like the acoustic music of Neil Young, when stripped to its musical base, Wolfe’s songs gained an added emotional weight through the directness of the no-frills delivery. “Deranged for Rock & Roll” took on a country tone when stripped bare, and “Boyfriend” put its poignant pleas to the forefront.

Although longtime collaborator Ben Chisholm was onstage providing textural guitar and backing keys, his contributions were restrained, coloring the empty spaces between Wolfe’s notes rather than dictating the perception of the music. A highlight of the set was the serene cover of Joni Mitchell’s “Woodstock”, as Wolfe moved from her perch center-stage to sing next to Chisholm. Wolfe delivered a flawless vocal performance throughout the 17-song set, aided by a touch of compression and EQ to give her voice a studio-like sheen over the concert PA.

Wolfe closed the night with her voice alone, performing an a capella rendition of “The Way We Used To” for the encore. A circle of fog spiraled around her as the crowd stood transfixed. Nobody moved, nobody pulled out their phone to film. They watched, and they listened.

Photo Gallery – Chelsea Wolfe and Ioanna Gika at Brooklyn Steel (click to enlarge and scroll through): 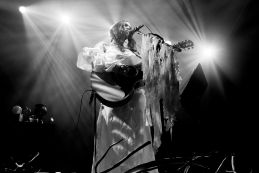 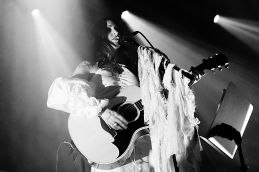 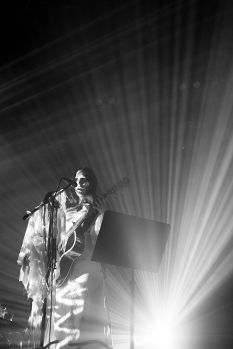 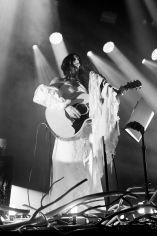 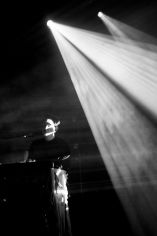 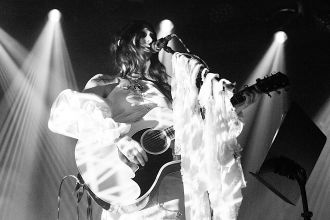 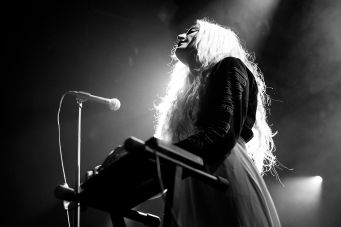 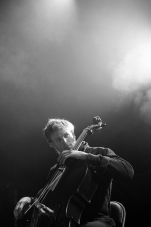 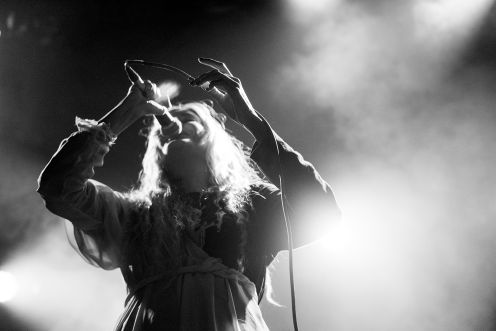 All photos by Jon Hadusek

Encore:
The Way We Used To

Live Review: Chelsea Wolfe Strips Her Songs Down to Their Dark Essence in Brooklyn (11/1)