Setting the Stage: The warehouse venue Elsewhere in Brooklyn’s Bushwick neighborhood typically hosts indie pop and dance parties, but it was overrun with metalheads on Thursday and Friday for High on Fire and Power Trip’s two-night stand. We caught the second of the two sold-out shows, which made savvy use of Elsewhere’s bass-centric sound system and pushed the venue to its spatial limitations. Fans crammed into its crowded confines, standing on staircases and in every available nook in order to accommodate the imminent circle pit that would consume the center of the room.

Taking the Stage: The night began particularly early, and few made it in time to see Creeping Death’s 6:00 p.m. set. Like their fellow Texans in Power Trip, Creeping Death also hail from Dallas. The band plays a style of death metal that incorporates metalcore breakdowns and manic Kerry King-style guitar solos, but apparently it was too early for moshing, as Creeping Death played to a static room of concertgoers still sipping their first beer.

The bill presented a variety of heavy metal sects, as Philadelphia’s Devil Master shifted the vibe with their brand of blackened street metal. The band donned corpse paint and performed behind a veil of cobwebs, channeling D-beat hardcore and Japanese punk metal such as Death Side and G.I.S.M. It was an invigorating set — perhaps too fast and raw for the thrashers who would emerge for Power Trip’s deliberate, mid-tempo breakdowns.

It seemed like many had read the set times online and showed up right before Power Trip, as the room went from half empty to capacity during the load out between sets. There was suddenly nowhere to stand or move, and to go get a beer or use the restroom meant to sacrifice your spot. Elsewhere’s layout is designed for close-quarters dancing, with its sound and DJ booths taking up major real estate on the floor plan. People were stacked on top of each other when Power Trip took the stage, and the sardine effect only got worse when the center of the room turned into a violent circle pit, forcing passive onlookers to retreat back toward the rear bar and merch area. Not that anyone should have expected anything less. Power Trip have been inciting wild crowds for over a decade, and relentless touring has made their riffs airtight and razor sharp.

Opening song “Manifest Decimation” literally commanded chaos. Those who had been holding back during the last two sets went full tilt, climbing onstage and diving into the tornadic swirl of bodies. After running through “Firing Squad” and “Hornet’s Nest”, frontman Riley Gale expressed his discontent: “Not good enough, New York. Night one is kicking your ass right now.” The goading worked, as there were suddenly twice as many stage divers, and when the band got to the first two tracks off 2017’s Nightmare Logic, “Soul Sacrifice” and “Executioner’s Tax (Swing of the Axe)” — arguably their most well-known songs — it became physically dangerous to be in the pit…much to the delight of the thrashers. Gale hoisted and swung his mic stand during the chorus of the latter. “That’s better,” he said, “I think you’re getting up there with night one now.”

Again, the vibe changed for High on Fire, who brought out a more reserved stoner and sludge metal crowd, creating an amusing contrast of temperaments. It became clear that Matt Pike and company had no interest in stage divers, but the pit still moved and swayed to crushing songs like “Spewn from the Earth”, “Speedwolf”, and “Fertile Green”. All eight High on Fire albums were represented in the setlist, which had a steady flow and well-curated pace. Faster and thrashier songs were followed by nodding sludge and doom. The latter made full use of Elsewhere’s bass-heavy subwoofers, creating a brutal volume and bowel-quaking low end. Sometimes gruff and one for few words, Pike was as upbeat as the audience, stepping to the mic to offer his gratitude to the other bands. “They’re making us old guys play better,” he said. “Gotta keep up with them, these kids are fast.” Before a closing barrage of “Snakes for the Divine” and “Electric Messiah”, Pike then showed some love to the sold-out crowd — “I love you people,” he said — ending the night of satisfying heavy metal with warm sentiment.

Photo Gallery: High on Fire, Power Trip, Devil Master, and Creeping Death in Brooklyn (click to enlarge and scroll through): 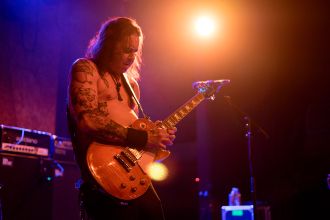 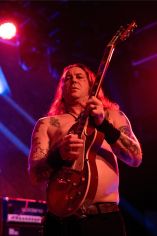 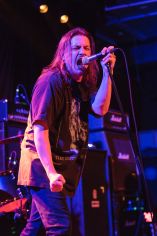 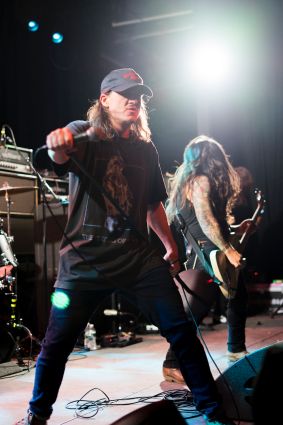 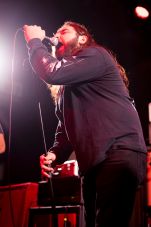 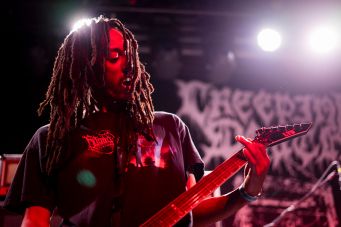 All photos by Jon Hadusek

Power Trip Setlist:
Manifest Decimation
Firing Squad
Hornet’s Nest
Divine Apprehension
Soul Sacrifice
Executioner’s Tax (Swing of the Axe)
Crucifixation
Conditioned to Death
If Not Us Then Who
Crossbreaker
The Hammer of Doubt