Just ahead of Tom Waits’ 70th birthday, an all-star lineup of female musicians will honor the songwriting legend with a new tribute album, Come On Up to the House: Women Sing Waits. Prior to the record’s November 22nd release via Dualtone Music Group, the whole thing is streaming below along with a Track by Track breakdown.

Noted Waits acolyte and musician Warren Zanes produced the effort, which sees 12 artists turning in beautiful renditions of Waits classics and deep cuts. Each one puts their own touch on the songs, peeling back Waits’ often experimental compositions and his distinct gravely voice to reveal the magnificent songwriting at their core.

Stream Come On Up to the House: Women Sing Waits in full below.

For more on Waits’ music and Women Sing Waits itself, Zanes has been joined by Griffin, Cash, Joseph, The Wild Reeds, McMahon, and more of the artists featured on the album for a Track by Track breakdown. Check it out ahead.

“Come On Up to the House” — Joseph:
Well the moon is broken and the sky is cracked.” Yep. “The only thing you can see is all that you lack.” Yep. And the invitation follows, “Come on up to the house.” The house is where someone’s made a hot plate of dinner for you. It’s where you can take off your coat and stay awhile. It’s where you can sit and enjoy conversations with friends. You belong there. It’s not that being there can fix any of your problems, but come on up. I love that it doesn’t offer a fix to anything, because sometimes there is no fix. And maybe the song is talking more about a metaphysical state of mind to exist in. A way of thinking that is grounded in peace despite the chaos in your life. However you hear it, there’s a place you belong and the song invites you there. – Natalie Schepman of Joseph

“Hold On” — Aimee Mann:
I approached Aimee about covering a Waits song because I knew that she didn’t do covers casually. Her version of Harry Nilsson’s “One” is example enough. So I knew she wouldn’t say yes if she didn’t have something to bring. Now, in the back of my mind I had “Hold On” as the one I hoped she’d do. It was those lines, “Well he gave her a dimestore watch/ And a ring made from a spoon.” I thought, really, Aimee Mann might wear a ring made from a spoon. In fact, she might be the only person I know that I could say that about. She’s that cool and unknowable. I’ve felt this for some time. You should understand that I was a kid in Boston, a teenager, when I first met her. I think I tore my Linda Ronstadt posters off my bedroom wall after I saw Aimee perform in her band The Young Snakes. A new era had come. When I heard her vocal on “Hold On”, it felt like all my beliefs had been confirmed. — Warren Zanes 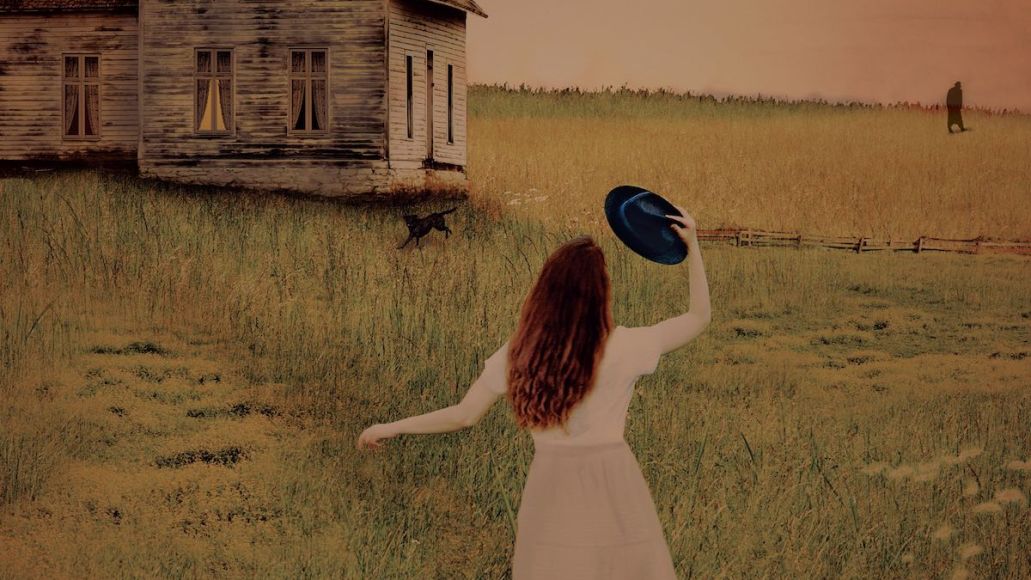 “Georgia Lee” — Phoebe Bridgers
Scott Robinson at Dualtone asked me to think about Phoebe Bridgers for this project. I started that “thinking about” process by reading some of Phoebe’s interviews, getting a sense for the world in which Phoebe and Tom Waits came together. I envisioned a girl stealing her parents’ best records and listening to them in ways her parents wouldn’t know how to. Then, her song “Motion Sickness”  made me believe that if I’d gone to boarding school with Phoebe, we would have been friends. Just a gut feeling. Let me say this, however: I’ve never met her. Still haven’t. I hope to one day. But you can produce a collection like this and not meet all of the artists included. When she delivered “Georgia Lee”, I was deeply moved. I felt very lucky. Tony Berg produced the track. When Waits did the song, it felt like it came from a distant past, as though it were written on a stone tablet. He can do that. When Phoebe performed it, it felt like right now, kind of urgent. “Why wasn’t God watching?” That line is as good a piece of writing as I’ve ever seen, and it had a new resonance in Phoebe’s version. — WZ

“Ol’ 55” – Shelby Lynne & Allison Moorer:
Tom Waits is not only a master songwriter, singer, and storyteller, but also one of the great visionaries of our time. He is what we all want to be – a fully integrated artist who seemingly sees the whole picture at once and knows how to present it so that we do too. My sister and I were thrilled to participate in this tribute to him and his songs. “Old ’55” is a classic, filled with romance, hope, and also just enough tension and melancholy to remind us that all relationships have a beginning, middle, and end. And boy, that melody. — Allison Moorer

“Take It With Me” – Angie McMahon:
I remember driving through the hills somewhere when I first heard this song. Someone played it for me and said, “You just have to hear the final verse. It’s the best verse ever written.” I think I agree. It was actually terrifying to cover this because I love the original version so much. It’s an incredibly beautiful recording. I just wanted to put my spin on my favorite Waits song so I could be part of this record too. — Angie McMahon

“Jersey Girl” – Corinne Bailey Rae:
My greatest private hope for any track in advance of the recording was for this one. In my heart of hearts (I have one, and I hope to never give it away, though I’ve come close), I wanted Corinne to leave the gender as it was. I wanted it to be a woman singing to a woman, or a girl to a girl, depending on how you hear it. But I didn’t want to raise the issue and, in doing so, make it an issue. When Waits sings it, or Bruce Springsteen sings, it’s a man to a woman, obviously. I can’t tell you why I wanted it to be woman to woman. I can only speculate. I know the romance of the song took me all the way into its world when I first heard it, when I was young. I could see the places, the people. I knew what it was like to be in love, and the song brought me back to that feeling. But there are so many kinds of young love, sometimes transcending the sexual. I guess I was thinking of those loves between young men or loves between young women that may or may not have a sexual component. I think it’s pretty universal to love someone of the same sex, no matter your sexual orientation. And I think there’s a lot of beauty in that. I wanted Corinne to bring me a picture of that. And she did. I’m still looking at it. — WZ


“Ruby’s Arms” – Patty Griffin:
I love “Ruby’s Arms” because it makes me think of people in my family. I started singing it years ago because of that and it moves me in a way that helps me to look a little deeper at what might be thought of as weakness in someone. I do think there are good hearted people everywhere that don’t know how to stay within the bounds of what is considered normal life, who for whatever reason feel frightened and suffocated in one place for too long even if that place is where love is… like it’s protection of their real nature to keep moving and have the solitude of being a stranger wherever they are. To me this is a strong and compassionate story about that struggle. — Patty Griffin

“Time” – Rosanne Cash:
What an honor to sing a song like “Time”. Many years ago, I recorded it just for myself, just for the pleasure of singing those words. Maybe I seeded the notion in the deepest part of the creative ether, the place from where these songs travel through Tom. For whatever reason and from whatever source, I’m just thrilled to be a part of this album. There is no other songwriter in the world, past or future, like Tom Waits. — Rosanne Cash

“You Can Never Hold Back Spring” – Kat Edmonson:
The first time I heard Tom Waits I was disturbed. “Who was this man growling and screeching at me? Was he trying to drive me away?” But I was intrigued the way one would be if they spotted a beast in the wild. I maintained a safe distance and began to track this writhing animal into the woods. Eventually, I heard him crying out in pain and I got struck with compassion and grew more interested in him. “Was he walking wounded? What was he going to do next?” And then, all at once, I heard him make the purest sound that a living thing could make. The sound of hope. That’s what “You Can Never Hold Back Spring” sounded like. It resonated so clear inside me that I soon found myself in awe of this beautiful creature, this man. Years later, I was delighted when Warren Zanes asked me if there was a song I might like to record for a Tom Waits tribute album he was producing. — Kat Edmonson

“House Where Nobody Lives” – Iris Dement:
This was the track that got the project going. And Iris has a distinctive voice in much the way Waits does. Because of that, I think it feels very personal to her. That’s how I hear it, at least. It’s her street as much as it’s Tom’s. But it’s a great instance of the way in which Waits takes a very specific image yet arrives at a universal thump. I think we look a little longer at those houses that have been abandoned. And the way we look is as storytellers—first we wonder what happened there, and then, almost imperceptibly, we begin telling stories about what might have happened, then those stories sometimes become the myths of the place. There are a few Waits songs that find us standing outside houses, thinking about what is happening or once happened there. You might be invited in, you might have just been thrown out, you might want to get the hell out of there altogether: but these places have their own mystery, enchantment, and, simultaneously, an everydayness. Let’s face it, they’re fucking everywhere. Yet everyone is different. It takes a writer as good as Waits to pick up on the strangeness of this situation. It takes a writer as great as Waits to make poetry of it. Iris helps us learn more about not just the song but its writer. — WZ

“Downtown Train” – Courtney Marie Andrews:
“Downtown Train” is a perfectly written song about longing. Waits paints a beautiful image of someone who is just slightly out of reach, and he always has a brilliant way of writing poetic pop songs, which is no easy task. His language makes me want to see someone I long for on a downtown train. That’s why it’s easy to sing Tom Waits songs, because you can easily imagine yourself as one of his characters. — Courtney Marie Andrews

Contributors break down Tom Waits tribute Come On Up to the House: Women Sing Waits Track by Track: Stream