The Pitch: Rick and Morty for a hundred years (or at least 70 more episodes)! After a two-year hiatus and a massive renewal, the titular duo and their various enablers have returned for a fourth season. They come with the series’s usual array of bizarro science fiction adventures, twisted pop culture references, and compelling thematic depth beneath all the show’s transgressive weirdness. Sunday night’s season premiere, “Edge of Tomorty: Rick Die Rickpeat”, features the title characters venturing off to a far-away planet to retrieve “death crystals”, the latest set of intergalactic MacGuffins. These crystals allow anyone who touches them to witness their possible deaths, something an enterprising scavenger can use to win fights with alien poachers or, in Morty’s case, to redirect his whole life toward dying as an old man with his teenage crush, Jessica, at his bedside. Unfortunately, these efforts lead to Rick’s “death” and a series of multiverse-spanning resurrections for the amoral scientist, until he can only hope that the next leap … will be the leap home.

Crystal Doom Persuasion: The crystals themselves make for an entertaining device to power Morty’s half of the episode. One of this show’s strengths is its ability to borrow or invent some elaborate science fiction concepts, put them to work in a mundane setting, and reap the comic and dramatic benefits that come from the combination of normal sitcom problems and the show’s bonkers speculative fiction conceits. The very idea of a teenage boy being guided by magical death rocks that can lead him a future with his would-be girlfriend is an odd but creative concept to build an episode around.

For Rick and Morty, though, even that’s not enough. When Morty progresses from simply speaking up in class or ignoring bullies to achieve his desired endpoint, to taking on the military, mentally unraveling judges, and going full-on Akira, the show hits a level of out-there storytelling that few shows on television can match. The visual sequences that result are outstanding and serve to take Morty to bizarre but compelling places. Leave it to this series to take an already off-beat premise and then escalate it to its wildest and most entertaining extremes. 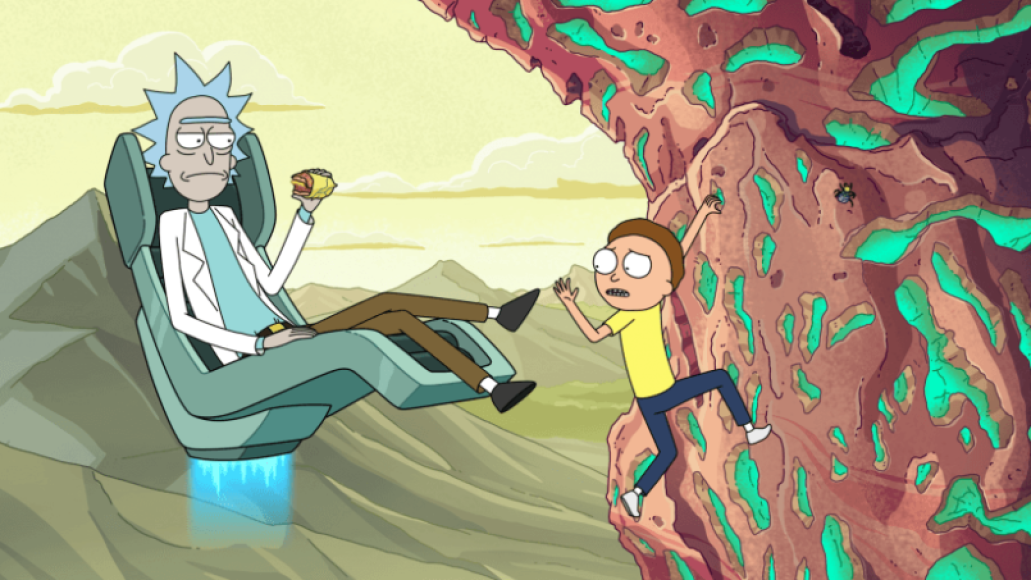 We Are the Holo Men: The funniest, but also most controversial, part of the episode will no doubt be the holographic version of Rick who appears to Morty after the “real” Rick dies. Holo-Rick is literally and figuratively a device: both the product of a chip in Morty’s spine and a way for the show to give Morty a way to interact with his main counterpart (or at least a version of him) as the show returns to the airwaves.

But Holo-Rick’s biggest role in the episode is to wring the laughs from his pursuit of tolerance and respect and rights for he and his fellow holo-people. (Shades of Star Trek: Voyager!) Holo-Rick’s comic relief is caked in harmless absurdity, and he even makes some thought-provoking points! But it’s also not hard to read the character as a critique of marginalized groups who legitimately seek that sort of acceptance, particularly when he gains substance and turns megalomaniacal.

Who knows where the show’s creative team, including episode writer Mike McMahan, stand here, but the answer is probably wherever nets them the most laughs. 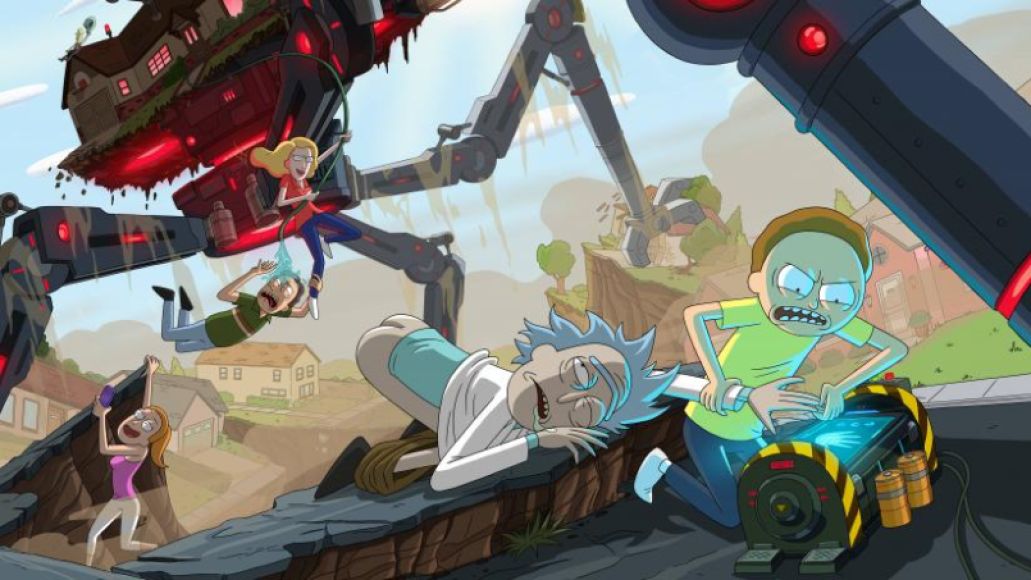 I Live, I Die, I Live Again (as a Giant Wasp): What would a new installment of Rick and Morty be without a little reality-warping fun? Rick’s constant deaths, followed by his consciousness being restored to a clone or backup in another dimension, matches the audience’s expectations for the rapid-fire craziness that’s become the show’s trademark. Whether Rick finds new life in a dimension of wasps or shellfish or fascists (or both!), the show continues to find new, cuckoo twists on its normal setting. The fascist universe’s Morty demanding classic adventures, defined more by what he doesn’t want than what he does, comes off as a thinly-veiled take on the implacable demands of the show’s most unreasonable, diehard fans. But this B-plot’s nods toward acceptance and even empathy suggest an avenue of potential growth for the series’ favorite amoral scientist, rather than bowing to those impossible expectations.

The Verdict: There are so many levels at which to take an episode like “Edge of Tomorty”, which speaks to one of the features of this series. Do you simply want to appreciate this outing as a series of wild, high-concept adventures and homages to nerdy pop cultural works like Akira and Live Die Repeat? Then by all means, enjoy the delightfully trippy sci-fi battles and dimension-hopping craziness as the latest dose of the breathless lunacy the show’s known for. There’s more than enough to entertain the fans on that level alone.

But there’s also a broader point to all of this. Rick is, shall we say, perturbed at having to ask Morty’s permission to go on their adventures and generally flies by the seat of his pants. But through his multi-dimensional journeys, he realizes that his “make it up as you go” approach can be a nightmare when things go awry. And through a darkly comic wasp disemboweling, he comes to the conclusion that putting his family’s needs over his own immediate wants can help him live his best life. By the same token, Morty is much more apt to exude caution and second guess himself, but when trying to live a life directed by the pursuit of one-specific outcome, he goes off the rails entirely (and not for the first time). The episode’s last scene, humorously demented though it may be, seems to suggest that Rick’s learning to be a little more like Morty, and Morty’s learning to be a little more like Rick, to their mutual benefit. 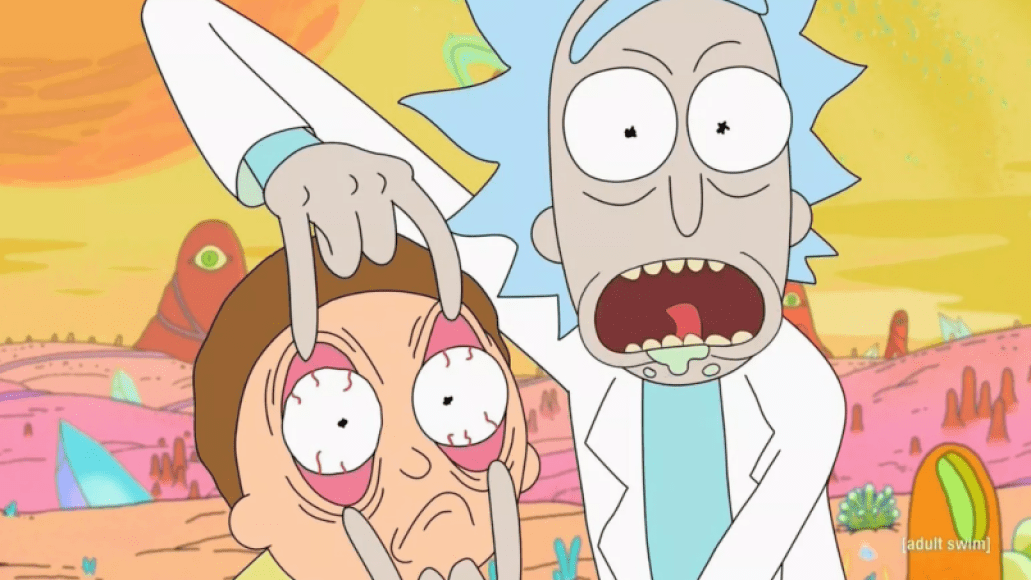 On the other hand, you can dig even further into the episode as a meta-commentary on the series itself, particularly in the shadow of its wild success and recent multi-season pick-up. The dialogue makes the notion all but explicit, but perhaps all this capering works as a metaphor for series creators Justin Roiland and Dan Harmon struggling with how to run the show going forward. There’s a balance between improvisational strangeness, planned arcs, classic bits, and new frontiers that’s tough to strike in any series, let alone one as free-ranging and off-the-wall as Rick and Morty. The first episode within the show’s brave new world may be a reflection of its creators own efforts find that elusive sweet spot, with added pressure and a new contract to fulfill.

But if “Edge of Morty” is any indication, the show’s creative braintrust still has plenty left in the tank. Time will tell whether that’s enough to fill 70 more episodes. And yet, as the show’s fourth season premiere demonstrates, that sort of richness gives Rick and Morty plenty of interesting places to go, new ideas to explore, and more delightfully deranged ways to express it all. Season 4 — show us what you got.

Where’s It Playing? Rick and Morty proves there are other worlds than these every Sunday night at 11:30 p.m. EST.