Coheed and Cambria are taking the idea of a festival to new heights, or seas. The prog-rockers have announced the S.S. Neverender, an immersive cruise featuring guests such as Taking Back Sunday, The Dear Hunter, and Culture Abuse. Update: Thrice, Power Trip, Sheer Mag, and several more acts have been added to the lineup.

Hitting the seas aboard the Norwegian Pearl from October 26th-30th, the inaugural cruise sets sail from Miami on it way to Nassau, Bahamas. The festival extends beyond the usual experience into something more interactive. Coheed and Cambria will be performing deep cuts from their catalogue, along with hosting Q&A sessions with attendees. They also plan to take guitarist Claudio Sanchez’s sci-fi narrative The Armory Wars (the backbone behind their 2018 LP The Unheavenly Creatures) and bring it to life with several “on-board installations,” according to a press release.

In a statement, Coheed founding member Travis Stever explained the thought-process behind the festival, stating, “We’re always trying to find ways to improve the fan experience. Our fans like to travel, they like to meet other fans, we’re like a big family.  So the idea of a cruise seemed like a way to allow a bunch of us to just go on vacation together.”

Pre-sale tickets are available now via the S.S Neverender’s website, which include flexible payment plans, and priority to those who purchased the last album. Coheed and Cambria are currently taking the rest of 2019 off the road (and ocean) so drummer Josh Eppard can tend to his health after passing out during a show. 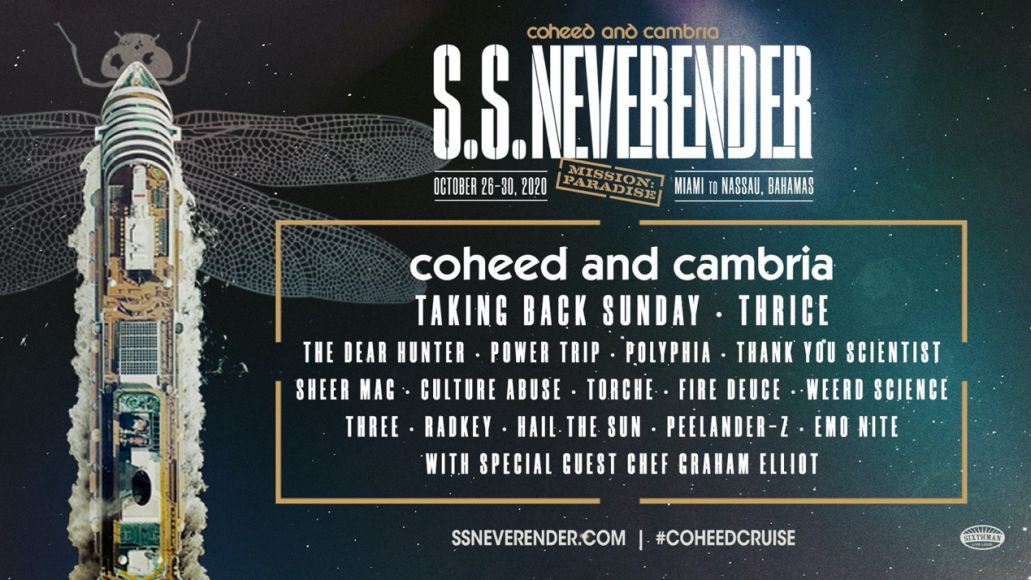