The Pitch.There’s something profoundly gratifying about watching a film take off into some uncharted part of the imagination and wondering, Did that just happen? Did this film really just do that? And when you see it happening over and over again—a director’s purest surreal impulses steering the car, taking you with them, unworried about shock, disturbance, bafflement, anything—you may feel, once the film is over, that your mind has been truly, as the cliché goes, bent. Such is the experience of watching In Fabric, the new film from Peter Strickland, purveyor of such previous oddities as The Duke of Burgundy. Ostensibly about a red dress that has a distinctly unpleasant effect on its wearers, often bringing violence or worse on them, it’s not really about a dress. But the movie isn’t a metaphor, either; it’s more a philosophical character study of the dress’ purchasers, a who-how-why-dunit in which you have the answer to begin with, after which many larger questions start. Is the film perverse? At the least, yes. At the same time, though, it’s intimate, and real, and sad, even when one could claim some of its parts, by themselves, are unbelievable.

It’s a Bargain, in More Ways Than One: The film tells two interlocking and complementary stories about the dress, both set in 1990s London; we hold the stories up against each other because we’re meant to; the film works as a series of parallels. Even the collage of still images and sounds smashing up against each other at the film’s beginning—a mannequin, an anguished face, a crash of piano notes, shrieking synthesizers—reveals itself to be very relevant to the film. Sheila (Marianne Jean-Baptiste), not so recently divorced, buys a red dress at a peculiar high-end department store. Why peculiar? When Sheila, whose dead-ahead, grounded delivery is something you hang on to in this film, expresses hesitation on learning the price of the dress, her saleswoman (played with remarkable gravity and good comic timing by Fatma Mohamed) offers, “In apprehensions lie the crevices of clarity.” 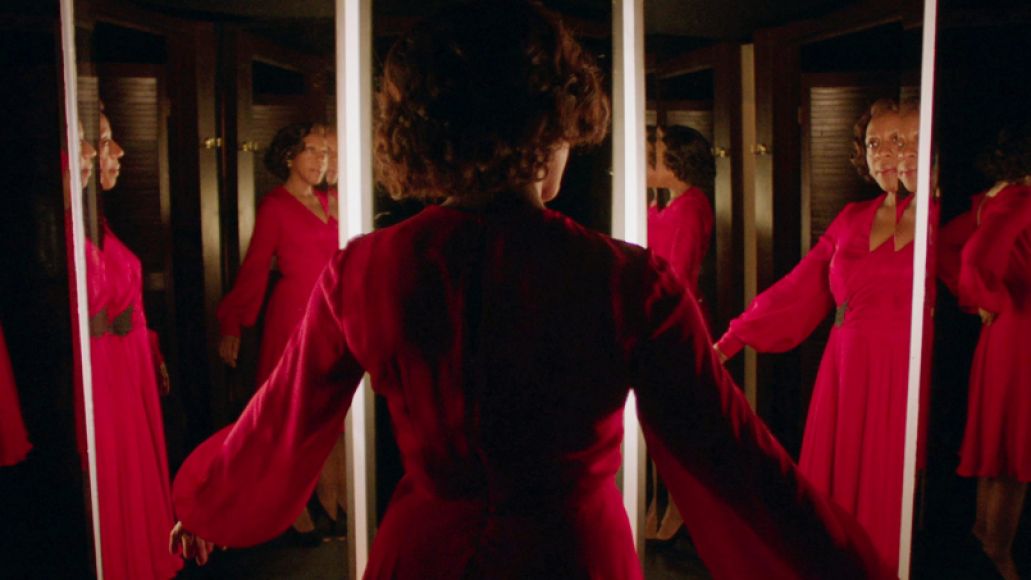 Once Sheila agrees to purchase the dress, the saleswoman seals the deal with, “Then I would like you to announce your locus of residence, followed by the numbers to your telephone.” This is both eccentric and not, like many things in the film; Strickland takes commonplace habits and ways of speaking and blows them up. After the sale, the saleswoman goes to the store’s basement, which would be fine if she did not descend, in the fetal position, in a dumbwaiter, and if the basement weren’t the location of macabre rituals, including fondling a mannequin that seems to be menstruating, as one of the store’s employees watches in secret, fondling himself. (Not to mention the sales woman’s strange dances, which correlate interestingly to the dress’s movements.) Again, strange and not: Who knows what really transpires in the corridors of corporate power, anyway?

Who’s Wearing the Dress, Here? The dress proves itself a willful part of Sheila’s life. After she wears it on a date, it gives her a rash, and when she puts it in her washing machine, the machine is totaled after going into a life-ending spin cycle (in which the dress remains unharmed). Destroying the machine isn’t enough; the dress drifts around Sheila’s house, also hovering over her when she’s sleeping. We’re relieved when we see some hope for Sheila, who wears loneliness like yet another garment and has a dysfunctional relationship with her son, who is having a rapacious and loud sex life with his obnoxious girlfriend under the family roof, as well as a dreary bank job where she is perpetually needled about the length of her bathroom breaks (by two managers who riff off of each other in a Monty-Python-esque sendup of corporate authority). Hope arrives when she has a nice date with Zach (played in a comfortingly relaxed fashion by Barry Adamson); the two bond, and dance, and then keep bonding. The dress, however, has other plans—after a romantic walk (in the dress) is cut short when a dog attacks Sheila, the dress becomes considerably more aggressive. Ultimately, it gets its way.

The Dangers of Talking Shop. The second half of the film has a decidedly different tone, although its crucial events are somewhat similar. The dress purchaser in this case is Reginald, played beautifully by Leo Bill, perhaps the most pasty-faced, mild-mannered soul you could possibly imagine. Shortly after we first meet him, as he is buying the dress for his fiancée Babs, he suffers through a sadistic bachelor party thrown by his future father-in-law which climaxes with him wearing the dress; the next morning finds him hungover, trying to discuss his upcoming wedding with Babs, a conversation all about details, like the wedding music, that can’t resolve themselves. The couple, though, has a believable relationship, touchingly portrayed here in two different, poignant scenes, one in which Reg has vigorous sex with Babs from behind while she talks in a bored way about the wedding, and another in which Babs places her head affectionately on Reg’s chest as they lie in bed; she fills a sexual need for him, while he fills an emotional need for her. It works, and it isn’t a surprise when we learn they’ve been together over a decade.

The dress has roughly the same m.o. in this section as in the last: Reg and Babs both get rashes after wearing it, and again, it destroys the washer, and again, we see a bone-chilling scene of the dress hovering over the sleeping couple. The destruction of the washer is especially ironic here because Reg is a washer repairperson. And in this case, his job is significant because he has a rare talent to lull listeners into a trance with what could be called “washerspeak” when he describes machinery problems, like this: “All that tension on the belt is creating havoc with the washers on the clutch shaft. The transmission mounting bolts have come loose, which might have been affecting the washer…” As he speaks, his listeners’ eyes roll up in their heads and the film’s synthesizer-heavy, European-horror-inspired soundtrack, evoking every late-night and jarringly cheesy horror film you might have ever seen, cranks into high, almost deafening, gear. Again, we can say this sort of disjunctive, surreal touch is arbitrarily surreal, and yet: how closely do any of us pay attention to speech like this, and how far away are we from a trance when we hear it? In any event, the film doesn’t end happily. Lesson: don’t leave a malevolent dress near a temperamental furnace. 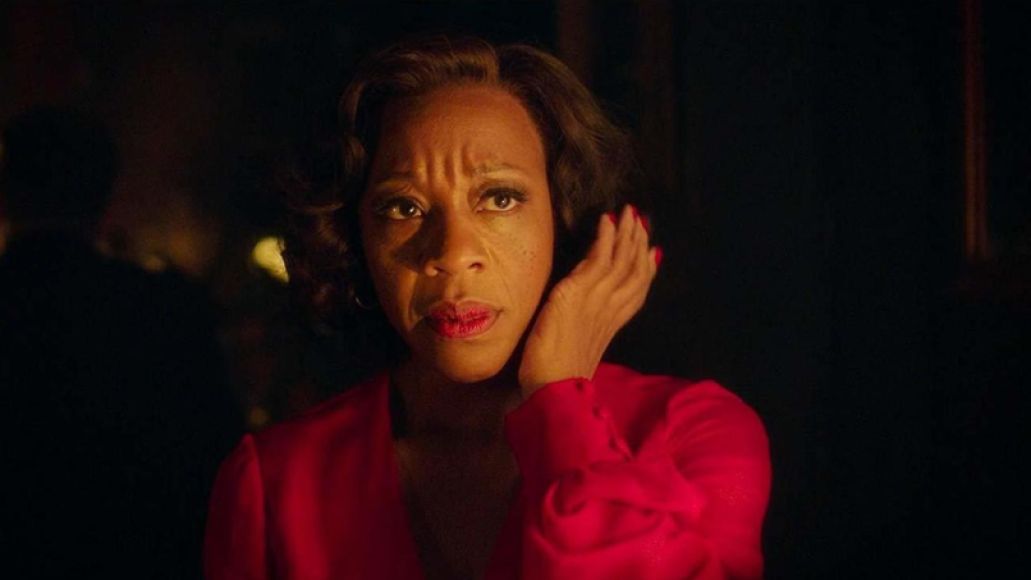 The Verdict. But as far as the larger lessons and questions In Fabric raises, here are some: Why do we speak the way we do? What is the actual value of the things we purchase, unlike intangible things? Why are we so bound to rituals like dating, marriage, work, and shopping? If the film has an answer to any of these questions, it’s probably an anarchic one. However, it’s probably best to view the film as a cypher, an opener of questions, with the red dress at its center a door to whatever might lie outside daily routine, however violent that passage might be.

Where’s It Playing? In Fabric has a limited release on December 6th via A24 and hits VOD on December 10th.