The Pitch: It’s been two years since four mismatched high school kids — Spencer (Alex Wolff), Bethany (Madison Iseman), Fridge (Ser-Darius Blain), and Martha (Morgan Turner) — were sucked into an old video game named Jumanji, and came out the other side of that adventure better friends and more confident people. Everyone, that is, except for Spencer, who’s struggling at college and yearns to feel the confidence and strength he felt as his video game avatar, Dr. Smolder Bravestone (Dwayne Johnson). That pull is so strong that, when he returns home for the holidays, he drags the game back out and loses himself inside.

To rescue him, Spencer’s friends reluctantly jump back into the game, now broken and glitching, but with a couple of reluctant tagalongs: Spencer’s gruff grandpa Eddie (Danny DeVito) and his estranged friend Milo (Danny Glover). What’s more, the glitchy game didn’t allow them to pick their characters, throwing Eddie into the size-14 boots of Dr. Bravestone and Milo into the character of zoologist “Mouse” Finbar (Kevin Hart). Together, they must remaster the game, find Spencer, and find a way to get back out.

Welcome (Back) to the Jungle: As harsh as I was on Welcome to the Jungle when it came out in 2017 (blame the impetuousness of youth), it really was quite the pleasant surprise for an effects-driven kid-friendly blockbuster. The four leads were charming and played against type, especially Johnson and Karen Gillan as the Lara Croft-like Ruby Roundhouse, and Jake Kasdan (Walk Hard: The Dewey Cox Story) has an admirable talent for balancing his characters and crafting a legible action setpiece. But for the sequel, Kasdan was asked to make lightning strike twice, and for as many twists as they try to lend this second (third?) go-round in the Jumanji-verse, it just doesn’t happen. 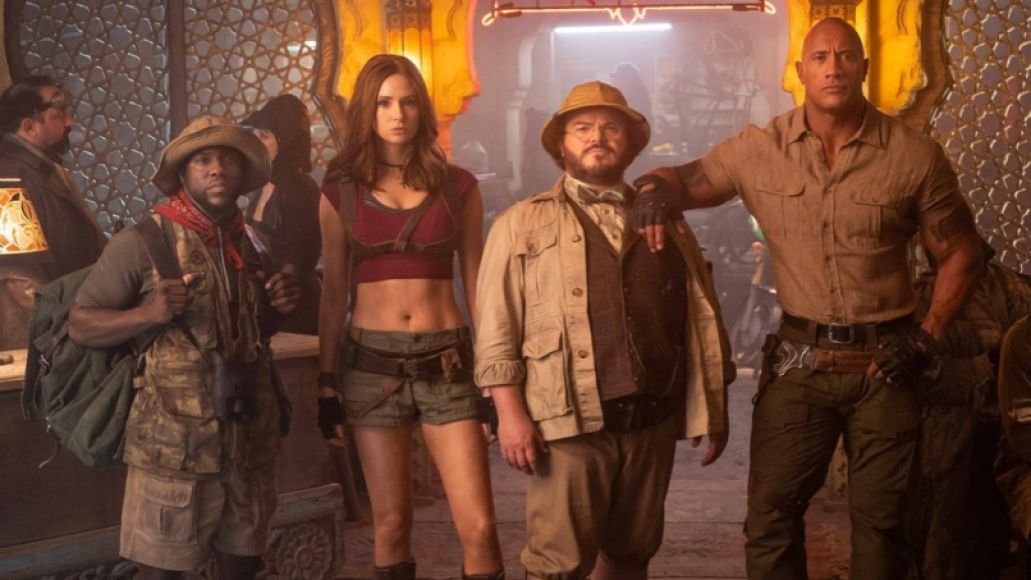 Jumanji: The Next Level (Sony)

Much of it has to do with the limitations of the premise itself: you can’t repeat the exact same story twice, after all. So Kasdan, along with co-writers Jeff Pinkner and Scott Rosenberg, craft a ‘new level’ of the game that’s essentially the same quest, slightly remixed. There’s a glowy jewel stolen from natives, a glowering baddie (Game of Thrones‘ Rory McCann this time), and all kinds of nasty critters and obstacles to outwit along the way. At this point, the set pieces are superfluous, albeit capably handled by Kasdan and co.; one particular chase along a constantly-moving series of rope bridges feels appropriately video-gamey. Even so, The Next Level shares its predecessor’s two-hour runtime, which makes the whole thing drag, especially in the final act when it actually has to get down to the business of actually winning the game.

Grumpy Old Men: One thing that really works about the body-swapping aspect of these new Jumanji films is how it lets its characters reckon with the insecurities and awkwardness of their bodies. “Getting old sucks, kid,” grumbles Eddie to Spencer early in the film. “Don’t let anybody tell you different.” Where Welcome to the Jungle used the idealized characters of the game to let its teens reckon with the idea of the adults they want to be, putting old-timers like DeVito and Glover in the bodies of The Rock and Kevin Hart offers the intermittent grace note on the way age fails our bodies. In the real world, Eddie wears a CPAP machine and is recovering from hip surgery; Milo, for his part, has his own health issues that only come to play later for some underbaked pathos.

Still, it’s a treat to see Johnson (and, later, new avatar Awkwafina) try out their best Danny DeVito impressions (“Ah wee in Flah-ridah?”), and Hart’s deep, drawling riff on Glover is secretly one of Hart’s slyest, funniest performances to date. The two are clearly having a blast trying on character voices and playing with their physicality in ways their normal star roles don’t allow, and when Kasdan takes time out to let them bicker like grumpy old men, it’s surprisingly palatable. There’s also a bit in there about Spencer’s discomfort with life in the outside world post-Bravestone, but it’s buried in exchange for The Next Level‘s attempts to meditate on the impermanence of our creaky, aging bodies. 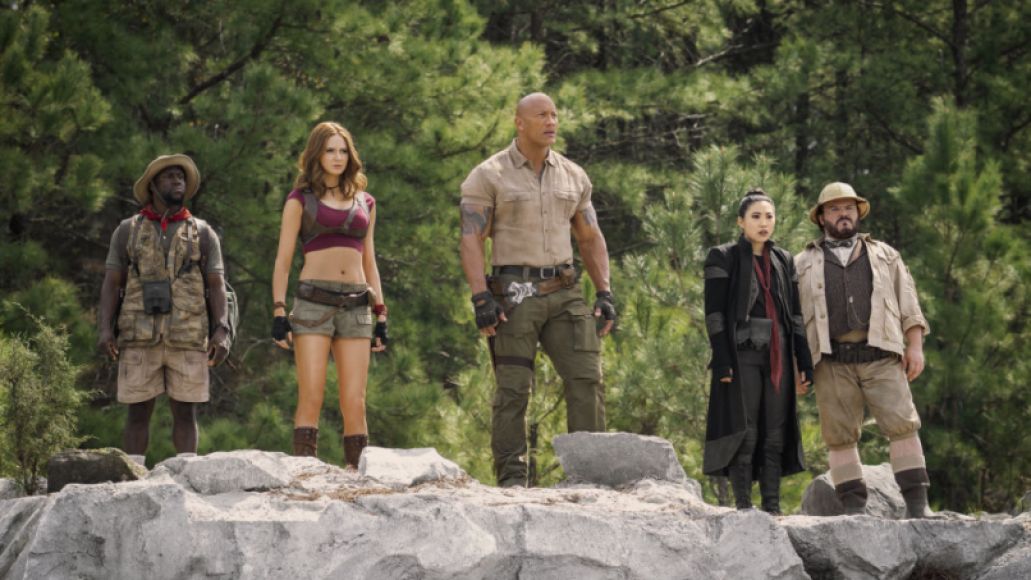 Jumanji: The Next Level (Sony)

Jack Black, Black? Some body-swaps, though, work better than others, which end up stretching the conceit to some questionable territory. Fridge, for instance, finds his way into the body of portly “map guy” Shelly Oberon (Jack Black); the result, Black stomping around shouting, ‘Aw, hell nah’ and throwing a decidedly urban drawl on his voice, really skirts the line of good taste. And poor Gillan, one of the last film’s standouts, is relegated to the straight woman, with far fewer chances to shine. Even more avatars appear (Nick Jonas’ character comes back, accompanied by a black horse that is somehow also one of the game’s hidden avatars), and the main cast gets overstuffed by the final act.

The Verdict: Much as they may try to throw a few new mechanics at the wall, The Next Level suffers from lacking the surprise and inventiveness of the last film. At their best, the Jumanji films are fun, diverting action-adventure romps for the kiddies that sneak in a few weird messages about being happy with who you are, and putting in the work to maintain your close friendships. Apart from the old-age angle, though, The Next Level just feels like more of the same, and some of its bigger swings might just even border on the irresponsible. As kids’ fare goes, this series remains weird enough to not totally write it off. But for the next version, they might have to work out some of the bugs.

Where’s It Playing? Jumanji: The Next Level blows into the cartridge and slams it into theaters December 13th.

Film Review: Jumanji: The Next Level Is a Glitchy Sequel With Unnecessary DLC