The Pitch: It’s 2015, Pope John Paul II has passed away, and under his reign the papacy has remained conservative—opposing homosexuality, abortion, contraceptions, and the ordination of women and married men. Soon, the College of Cardinals arrive in Vatican City to elect a new leader who will either continue the church’s conservatism or usher in a new age of liberalization. During their deliberations, two names lead the others: the loquacious and approachable Cardinal Bergoglio (Jonathan Pryce) from Argentina and the stern Cardinal Ratzinger (Anthony Hopkins) of Germany. While the latter becomes Pope Benedict XVI, the two will one day reunite and once again decide the future of the papacy and themselves.

Hail Mary, Full of Grace: The Two Popes, the final major Netflix original release of 2019, is surprisingly a laidback and hilarious film. At points a study of Catholic tradition, at others a Stephen Merchant-like comedy—the Brazilian filmmaker Fernando Meirelles effectively adapts Anthony McCarten’s non-fiction book The Pope into a major showcase for his two leading actors.

Meirelles crafts the narrative through the incredible production design of Mark Tildesley. When the College of Cardinals meet in the The Sistine Chapel, the actors aren’t in the historic structure. Instead, the crew spent seven weeks building an on-set version. In these election scenes, the director employs an observational documentary style with his camera: featuring slow zooms and purposeful refocusing. During these scenes, the punchlines arrive in –again — a Merchant-like approach, relying on the mundane irony which composes many of the conversations between these priests. 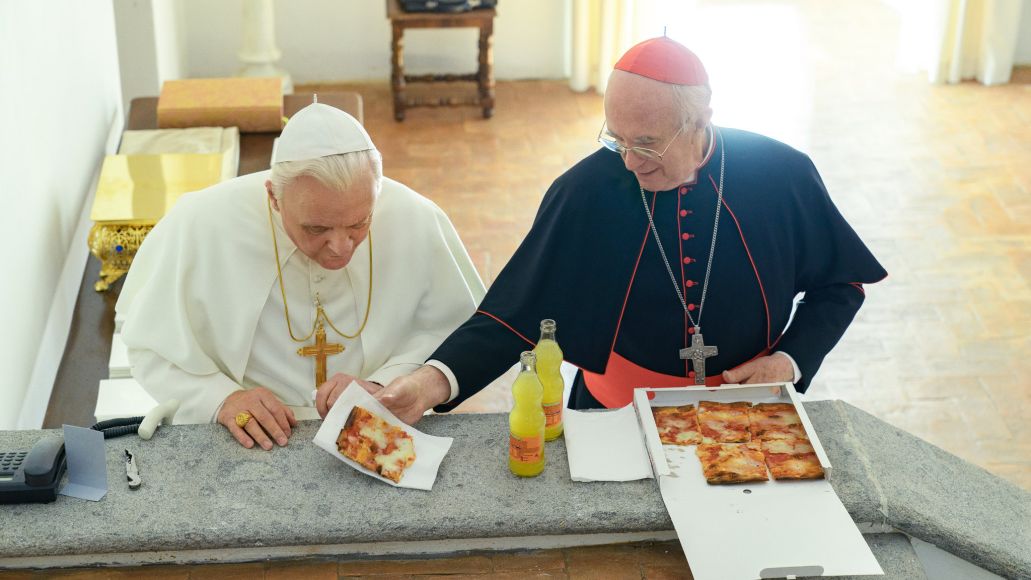 In fact, the tagline of this film could easily be: “Popes, They’re Just Like Us.” In one sequence, Ratzinger and Bergoglio are washing their hands in the bathroom as the latter whistles ABBA’s “Dancing Queen”. The whole affair, as the political mechanizations of the Church operate in the background (Ratzinger openly campaigns like a politician to gain the papacy), sets the stage for an approachable character study.

Pray For Us Sinners: Nevertheless, as an audience, we’re more than aware of the imperfections priests and the Catholic Church possess. Meirelles first represents such notions through each character’s relationship with God. Unbeknownst to Bergolio, who after seeing the church will never reform, now wants to retire, Ratzinger also hopes to leave his position as Pope. Once strong in his resolve, the aging Pope feels disconnected to God. He’s also embroiled in scandal, witnessing his driver arrested for leaking documents proving corruption in the Vatican while he also oversees the response to the crimes of sexual abuse among priests.

Though Ratzinger represents the conservative wing of the religion, and Bergoglio the liberal, Bergoglio was not always a reformist. In fact, he only became a priest because of a sign from God. Meirelles employs these flashbacks in black and white to recount the Argentinian Cardinal’s origins. Initially, a scientist planning on marrying his sweetheart, an urgent feeling overcame him to enter into the Church. There, after giving confession, he decides to enter the seminary. 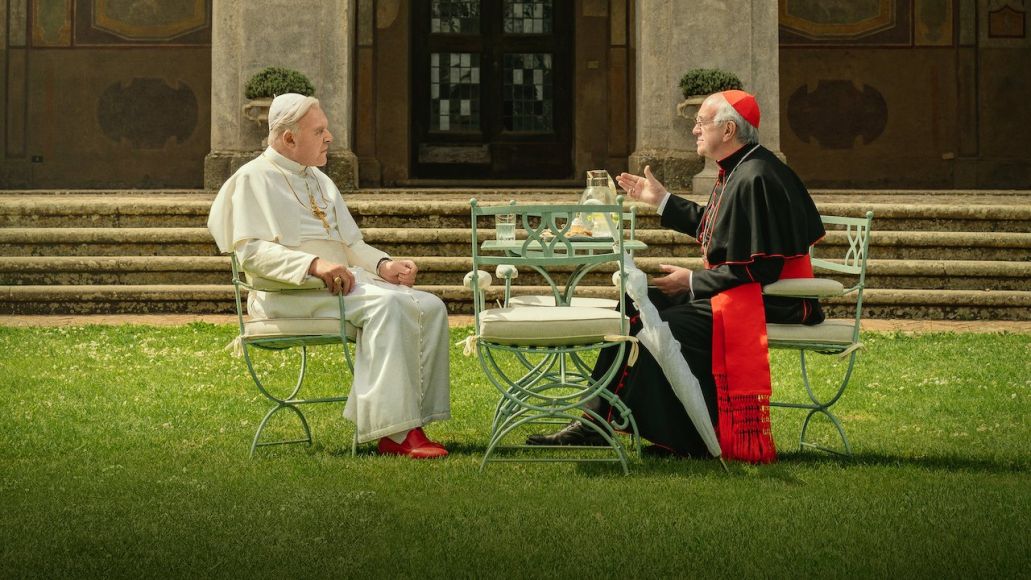 Unfortunately, the Catholic Church has a seedy history through supporting authoritarian governments. Vatican officials initially rejected reports of massacres under Pinochet as Communist conspiracies, and they openly decried the Sandinistas in Nicaragua. Moreover, in Argentina, the Church supported the dictatorship of Jorge Videla during the 1970’s. So while Bergoglio rises quickly in the Church, his country falls. Argentina becomes a dictatorship. Furthermore, the priest watched as friends were killed or imprisoned while remaining close to the government. Perceived as a collaborator, Bergoglio fell from grace when authoritarian rule left the country. He lost his position. He was banished to nowhere. His guilt regarding his inability to do more, to speak up louder, has never left him. And though Bergoglio became a rural priest, and learned to dedicate his life to economic reform, the shadow still follows him—to the point of Bergoglio dismissing any notion of his worthiness for the papacy to Ratzinger.

By showing Bergoglio and Ratzinger’s fallibility, Meirelles allows for some fantastic character work that humanizes them. But with one quibble. Though he patiently unravels Bergoglio’s relationship with the dictatorship in his country, demonstrating the priest’s journey through flashbacks and evocative shots of him wandering through foggy grassy plains, the filmmaker doesn’t examine Ratzinger’s past with the same regard. The German priest was routinely referred to as a Nazi. While, yes, his family resented the Third Reich, he served in the Hitler Youth during the 1940’s and later served in the Luftwaffenhelfer (anti-aircraft corps). Meirelles probably doesn’t traverse this ground because Ratzinger is already dealing with some current shortcomings with respect to his scandals, but the lack of balanced context does appear like a missed opportunity for further characterization. 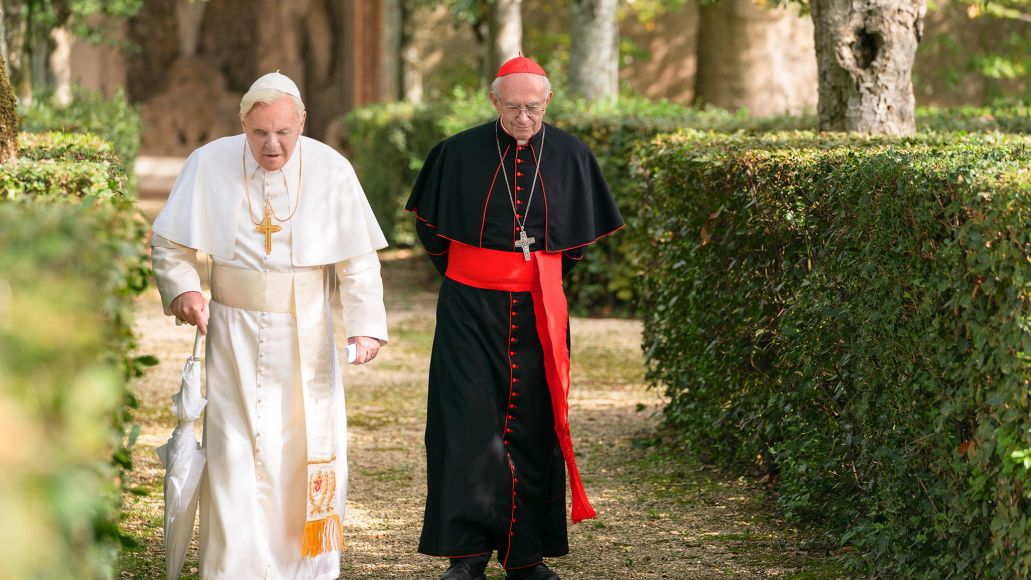 Amen: Nevertheless, Pryce and Hopkins immaculately hide that slight flaw. For one, their language play—switching between Latin, Italian, and English—is incredible. They also have wonderful chemistry as the polar opposite clergymen. Whereas Ratzinger prefers isolation, classical music, and strict doctrine, Bergoglio is personable, a soccer fan, and loves to tango. Some of the best scenes involve the two trying to find common ground. In one moment, the Pope is unaware of The Beatles or Abbey Road. When Bergoglio tells him a joke, the beat Hopkins gives before responding with, “It’s a joke. A joke”, is sidesplitting. And though hilarity pervades, in other moments the two share divergent tense debates about the nature of Catholicism and the future of the Church, which later evolves into the rich instances of Bergoglio recounting his past to Ratzinger. The growing friendship and empathy between the two lives in every awkward silent and forced laughter, and thrives in Pryce and Hopkins’ wonderful performances.

The Verdict: Meirelles’ The Two Popes is certainly an acting showcase, but it’s also a well-crafted film. Luca Canfora’s accurate costumes are perfect imitations of the Catholic Church’s robes and regalia, while his period piece work begs for detail and range. He provides both in full measure. Bryce Dessner’s score swings between lounge act and jazz club, while adding a further sense of ease to any scene between the two actors. A tightly constructed narrative, which examines the role of forgiveness,The Two Popes is a lowkey buddy comedy that simply follows two actors at the top of their game.

Where’s It Playing? Praise be to Netflix, who is currently streaming the film.

Film Review: The Two Popes Is A Blessing of a Buddy Comedy