The Pitch: It’s 1939, World War II is in full swing, and Nazism has blackened the hearts of the German and Austrian people alike. All, that is, except one: a humble farmer in the mountains of northern Austria named Franz Jägerstätter (August Diehl), a man whose devout Catholicism leads him to reject Hitler’s call for every able-bodied man to swear an oath of allegiance and fight for the Nazi cause. At first, family life and the slow progress of the war allows him to sidestep that decision. But as the war continues, Nazi soldiers and his village make that choice even harder, and eventually he’s put on trial for treason. As his wife Fani (Valerie Pachner) suffers the residual resentment of the radicalized village back home, Franz works to cling to his beliefs and principles… even if they cost him his life.

The Growing Good of the World: Any cinephile worth their salt knows how a Terrence Malick film works: his films are long, painterly, and demanding, asking more patience and consideration than almost anything else you’ll see that year. And granted, even Malick’s firmest stans occasionally have trouble with fascinating messes like Song to Song or Knight of Cups; it’s often hard to cut through the chaff to find that wheat Malick’s ingenues are said to constantly be brushing their hands through.

But A Hidden Life is not one of those — it sees Malick working in peak Tree of Life, New World mode, turning his delicate gaze towards more spiritually straightforward concerns, and yielding tremendous rewards. Even at three hours long, it’s hard to think of a moment that’s wasted in A Hidden Life‘s fog-shrouded meditations. Malick’s long been concerned with God and the cosmos, but unlike the creation of the universe in Tree of Life, he finds the divine in the true story of Jägerstätter, a single, simple man whose virtues lie in his commitment to principles, no matter the cost. 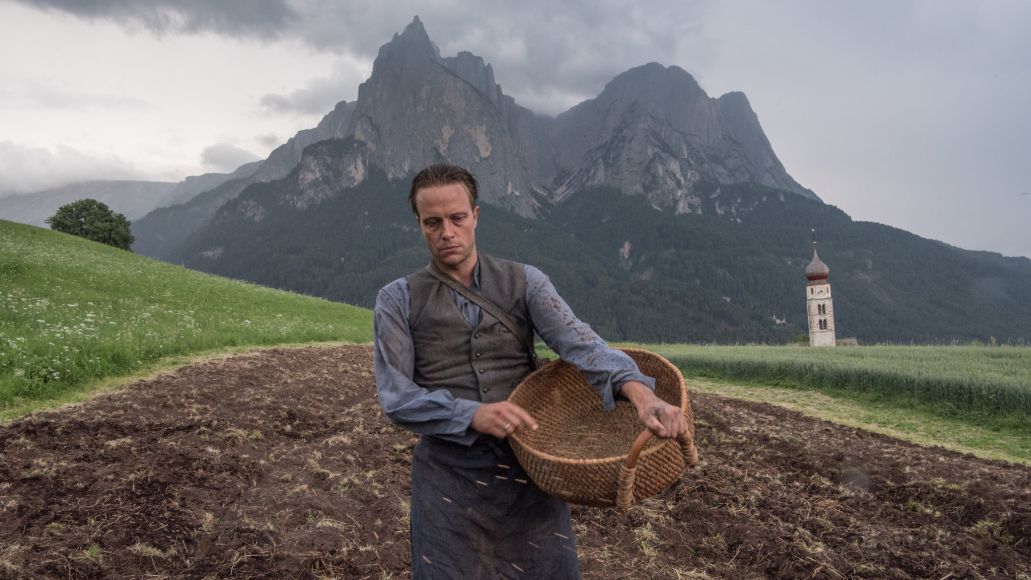 Granted, in classic Malick fashion, we get to know little about Franz besides his work and family life (he seems a good husband and father). Pachner and Diehl are strong, evocative performers, but they must mostly tell their characters’ story through invocation and the prototypical Malickian hushed narration. But really, Franz’s single-minded steadfastness, his lack of complication, is what makes him so compelling. A Hidden Life is about an unstoppable force (fascism) meeting an immovable object (a man with saintly conviction), and how that tension speaks to the bravery of those who insist on God’s teachings even when the world around him seems to abandon them.

Conscientious Projection: Of course, none of this subtextual beauty is conveyed through dialogue alone, Malick’s ubiquitous visual richness forging a path through the Austrian forest. With DP Jörg Widmer behind the camera, Malick places Franz and Fani against the verdant greens of St. Radegund, a pastoral paradise nonetheless beset with ominous fog and the wayward glance of a skeptical villager. His camera bobs and weaves to catch up to running families, and looks up at its characters from low angles as if we were a child straining to listen to adult conversations. It’s at once a frank and poetic way to visualize such a mythic tale, every image and gesture suffused with import. It’s all incredibly earnest and self-serious, broken up only by the brief spurts of happiness Franz has with his family, or a quirky trainee named Waldlan (Transit‘s Franz Rogowski) who later becomes his cellmate. 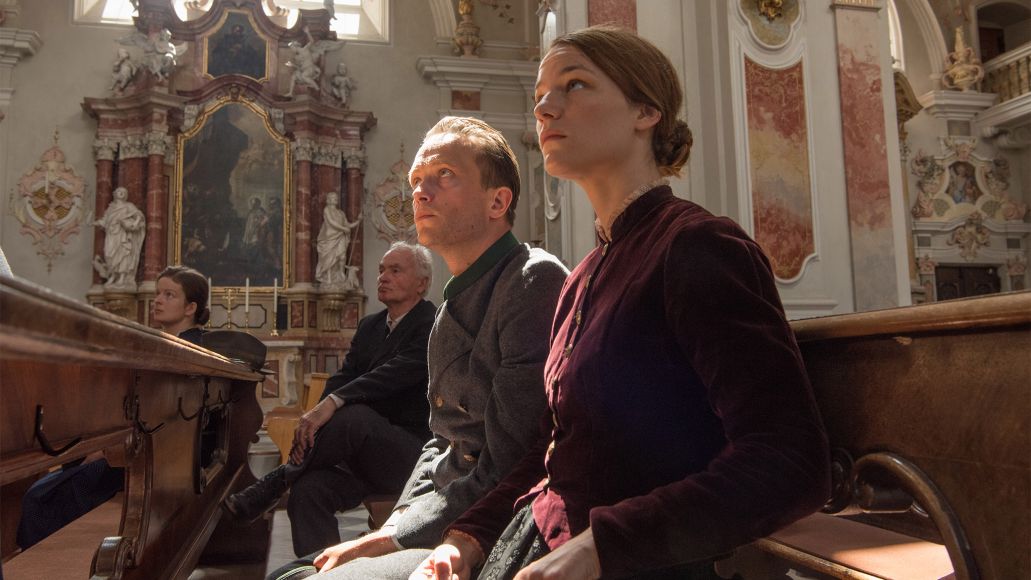 The Anvil Outlives the Hammer: Central to A Hidden Life‘s core concerns is how we define goodness and virtue, and the lengths to which we maintain those beliefs. Is Franz doing what God says by refusing to fight for the Nazis? Even if it costs him and his family dearly? At several points, Nazi interrogators (including brief turns by Matthias Schoenaerts and Bruno Ganz) ask him, “Do you think anyone will remember what you’ve done?” The question of Franz’s motives is infused in every defensive glance from Nazis and villagers alike, those who see judgment in his eyes where there is none. He’s a blank slate on which they (and we) project our interpretations on him.

But of course, while the whole reason we’re hearing this story is that the real Franz was beatified in 2007 and one of our most acclaimed filmmakers made a movie about him, that’s not the point. Franz does not resist because he wants to strike up a cause, or thinks himself better than those around him. He does it to honor the God that tells him to resist evil. He even spares a tinge of forgiveness for the people imprisoning him; it’s not that they lack his courage, but that it’s hard to back out of evil deeds once you tie your ego to them. 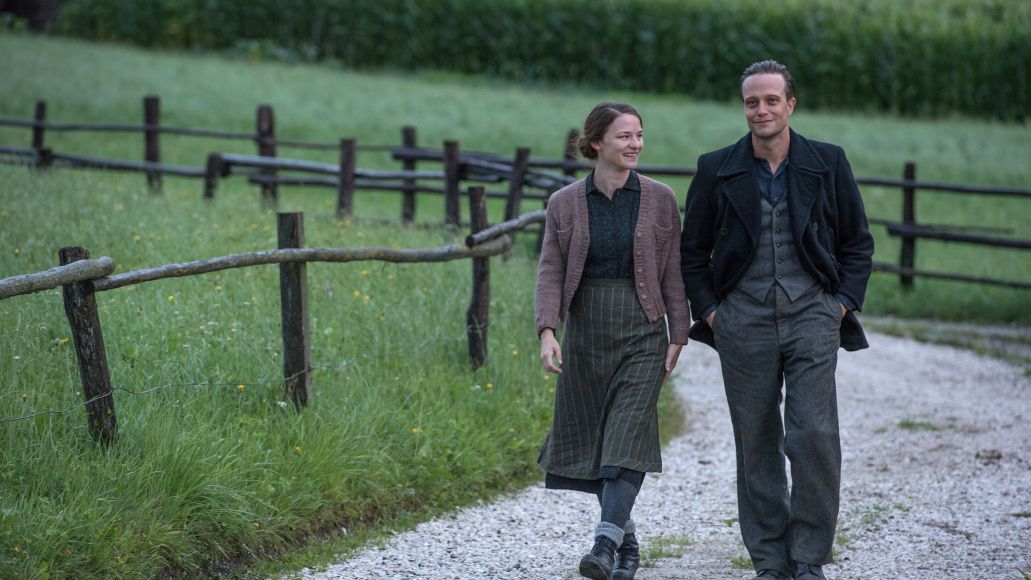 The Verdict: In his book of the same name, film critic Josh Larsen argues that “movies are prayers”; the act of making (or consuming) cinema is a spiritual experience on some ineffable level, bringing us in touch with images and ideas that come from somewhere beyond ourselves. Malick’s movies have always felt like that, and A Hidden Life is just his most recent, most transparent prostration. Despite its pedigree, there’s no opacity here, Malick sighing with the slow rhythms of time and the simple conflicts of its morality play.

It’s hard not to see the parallels between A Hidden Life‘s setting and the modern-day world in which it’s released. In an era where nationalism reigns high, and people’s loyalties are questioned when they refuse to defer to a leader they cannot support, its abstractions feel universal enough to graft onto the world stage of 2019. Which might be its biggest flaw: By unapologetically exploring such big, sweeping ideas, Malick sometimes forgets to find insight in the specific.

Where’s It Playing? A Hidden Life rides a motorcycle through the countryside and into wide release December 20th.

Film Review: With A Hidden Life, Terrence Malick Continues His Search for the Sublime