Josh and Benny Safdie are no strangers to style. Their films are flooded with it; vivid, dense, frenetic pictures. So, it’s only fitting that the two New York filmmakers would be talking from Chicago’s Waldorf-Astoria, on a swanky couch, surrounded by fruit, coffee, the works. They’re uninterested in any of it, though. The five-star table-setting is as much a juxtaposition for them as their tightly-wound dramas are for the A-listers they attract.

Their latest catch is Adam Sandler, who delivers — as you’ve no doubt heard by now — the performance of his career in Uncut Gems. As Howard Ratner, Sandler haggles his way throughout New York’s Diamond District as a Jewish jeweler drowning in myriad debt. It’s another survival parable from the Safdies, and while it’s their most expansive production to date, it loses none of the intimate anxiety that fuels their gritty catalogue.

Much of that intimacy stems from the fact that Uncut Gems is a personal pet project for the two. Not only did their own father work in the Diamond District, but they’ve also been building up to this film for over a decade. From waiting to land Sandler — at one point, Jonah Hill was even attached — to getting sidetracked by past films (see: Heaven Knows What), the journey to Uncut Gems is as long and winding as that of Howard’s opal. 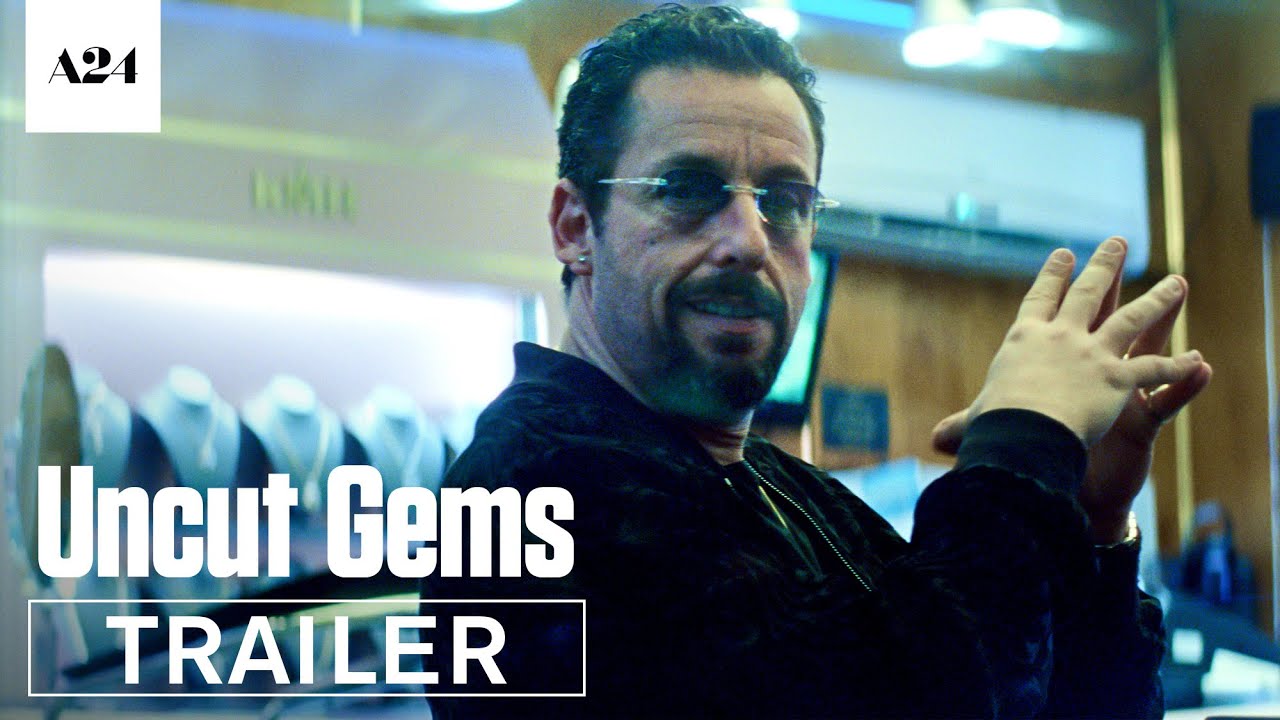 In a curious way, it’s a portrait of their own life as creators. “I think that Howard and his constant fight to belong, I can’t help but relate to that as a team of filmmakers who’ve been constantly trying to put our own product out there,” Josh Safdie explains to me, later adding, “You feel so dedicated to this thing, and you’re going to take any modicum of success and parlay it onto itself so that you can hopefully hit the big one.”

Given all the awards chatter –the film’s already received accolades from both the National Board of Review and the New York Film Critics Circle — the Safdies have hit the jackpot. So, it was admittedly a relief to catch them in the calm before the storm, because if Uncut Gems is any indication, this is hardly the last diamond they’ll mine. And as you’ll see in our conversation below, they’re not the type of creators to stop digging.

On filmmaking as a form of catharsis 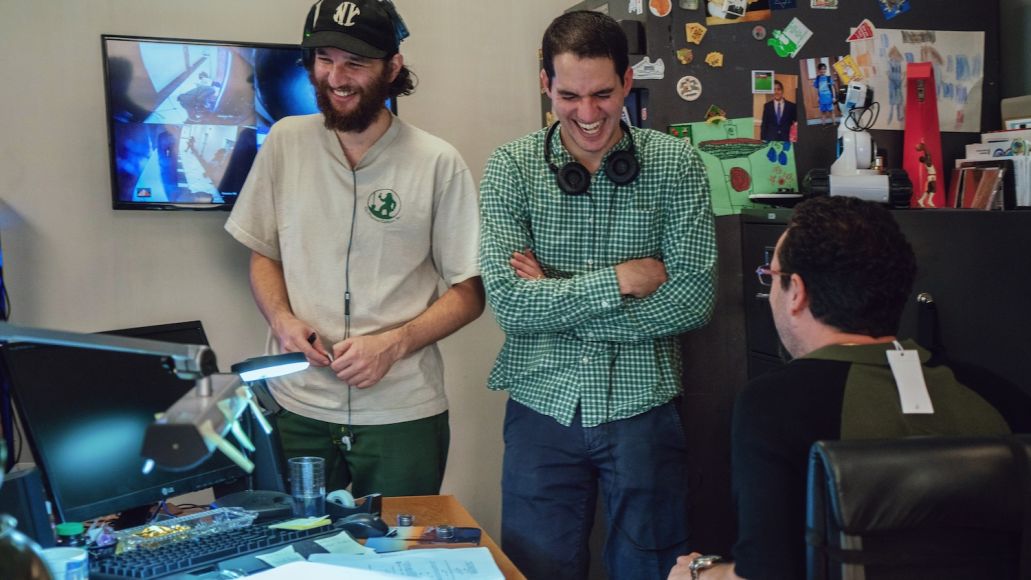 Benny and Josh Safdie on the set of Uncut Gems (A24)

Joshua Safdie: Sure, sure. I always wondered about horror film directors. We’re good friends with Ari Aster, and I think he has anxiety issues that he’s working out. And someone like [Robert] Eggers, who does horror as well. I always wonder if they’re trying to work out some sort of deep rooted fear, or if it’s some sort of like sadomasochistic thing. It’s different for us, though, like I can always watch Uncut Gems, and tap back into the feeling of anxiety when he’s in that SUV being flanked by them, by those heavies. Whereas when you watch a horror movie … there’s two different types of horror movies. There’s the jump scare horror movies, which aren’t scary anymore, and then you have a deeply eerily scary movie like The Shining that makes you feel uncomfortable. Like you shouldn’t be seeing it. I do think that those are tied deeply to the people who make them.

Benny Safdie: The thing that’s very strange is the production side of it is so anxiety-inducing. The level that you have to deal with is out of control, and you literally have to go through a crash course of the most anxious you’ll ever feel at any moment. So, in the end, when you watch it, you kind of break it down into little bits and pieces. Like “Oh yeah, yeah, yeah.” So you kind of don’t remember the anxiety in weird ways, which is kind of shock treatment.

On getting characters torturously from point A to Z 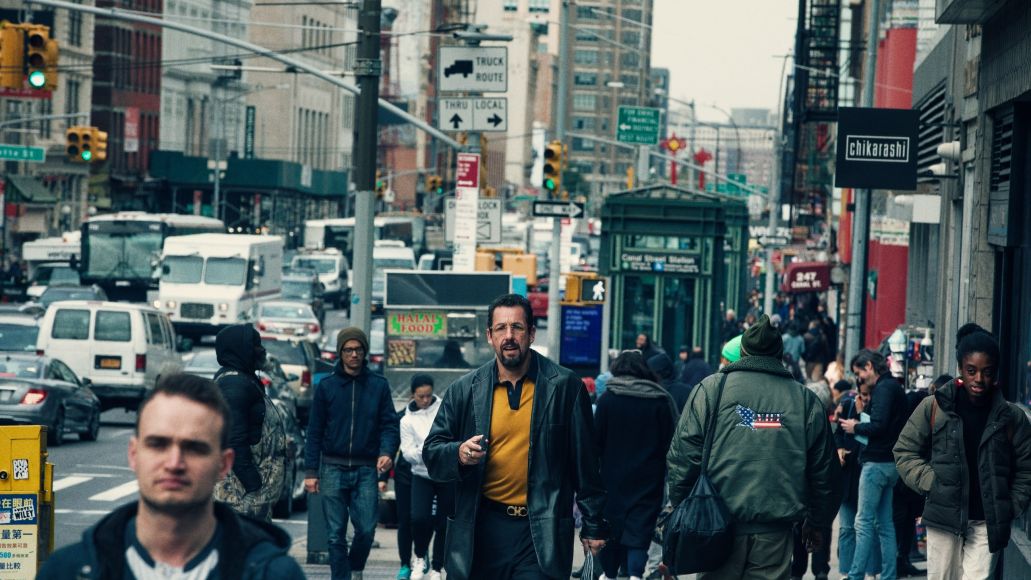 Joshua Safdie: It always comes out of the character, you know what I mean? And if you’ve done enough work and research … obviously with this one, we had a lot of time, not by design, but we just had a lot of time. So we were able to go back and amend the character biographies and they were so intricate and there were so many different versions of the script that actually ended up playing into the biography. ‘Cause you move things around like, “Oh well that happened to Howard because we wrote it out in detail,” or Dinah, or Julia’s character, or even Kevin’s character, or Demany’s character.

Each character had their own detailed biography. So, once you know these people, you can find their actions dictate themselves to you. But then, of course, there are a handful of overarching narratives, and there are ways you set the arena. You can set it in a really absurd scenario, like a basketball player — seven foot tall guy — getting stuck in a vestibule, and then you work your way backwards from that. And you’re like, “Well, how will these people who we know so well react to a scenario like that?” And it kind of becomes a little bit of you don’t know what came first the chicken or the egg?

Benny Safdie: I had a physics teacher once who said, “Look at the most complicated physics ideas and problems,” and the exercise was that you have to walk me through this problem. Start from point A and end at point Z and he goes, “You can have the craziest line drawn, but if you are actually literally holding my hand and walking me through that and I get there with you at the end, you’ve succeeded.” Well, that’s pretty awesome.

On the influence of video games (or lack thereof) 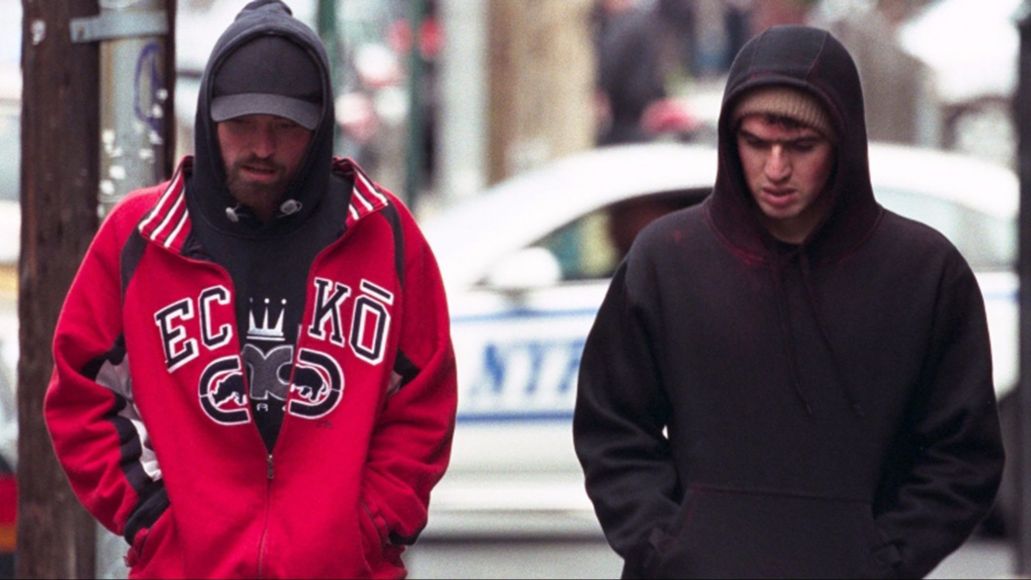 Joshua Safdie: It’s funny. I have no relationship with video games, but what’s crazy is on Good Time in Chicago, I got us into hot water during the Q&A after the film. Someone asked that same question, and there were a lot of gamers in the audience for some reason. Good Time, I think, is way more like a video game than Uncut Gems because it’s a guy in the middle of the night running around. It had a GTA feeling.

I remember the people from Rockstar, they approached us after they saw it. They’re like, “We love that, let’s talk about doing a game,” and I mentioned that in the [Q&A], and then I got a phone call being like, “What are you doing?” In the end, it was fine, it wasn’t meant to be. But, I was honest, I was like, “You know what? Any time I’ve ever played GTA, I only just want to get five stars. I don’t follow the narrative,” but the narrative is supposedly great. I just don’t play video games.

I was recently reading about a something that someone did. I never played this game, The Sims, and someone made up a meal, right? And the meal was poisonous. It killed anyone who ate it, and they sent an invite out to a party to all the other city people, but then they didn’t show, they just left all the food there. So then you can just watch all the people eat it and then die. And that, to me, sounds like a lot of fun. Right?

I remember ICQ. Our Dad had this avatar… 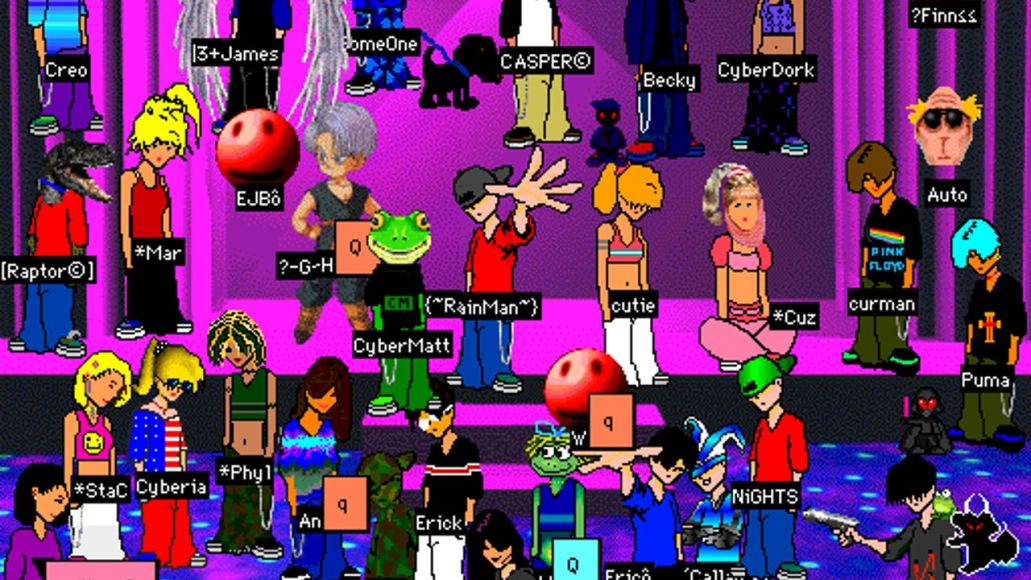 Benny Safdie: It was WorldChat.

Joshua Safdie: WorldChat! Our dad had a profile, and he clearly used it in a serious way, and had interesting deep conversations with people. We would just go up to people, go up to the bros, they’d just be talking, and we’d be like, “Penis.” Eventually, people would be like, “Oh my God, there’s the weird purple elephant.”

Benny Safdie: This is what a six and eight-year-old does when they get into the chat, they’re like, “Oh, what are you talking about? You want me to say it again?”

Joshua Safdie: Yeah, we ruined our dad’s profile. No one wanted to talk to him anymore.

Benny Safdie:  Sim City was cool. But, again, it’s world-building, and then you try and watch how the world creates itself.

On the power of audiences

Joshua Safdie: I think movies are unique in the sense that you can create a real-time experience for somebody. I think that horror is a genre that works really well with an audience because you can feel the collective scare. I think sadness doesn’t work as much, because if you hear someone crying in the middle of a movie you’re like, “Are they crying, why am I’m not crying?” You know what I mean?

But I think that thrill and anxiety, you can just feel the energy when someone’s tense. The whole room gets tense and it adds to the experience. And then when you add the kind of present element of our movies, where you’re moving with these characters, you don’t know what’s going to happen next, which adds another element of tension. I think that’s what makes a great theatrical experience.

On research — and lots of it 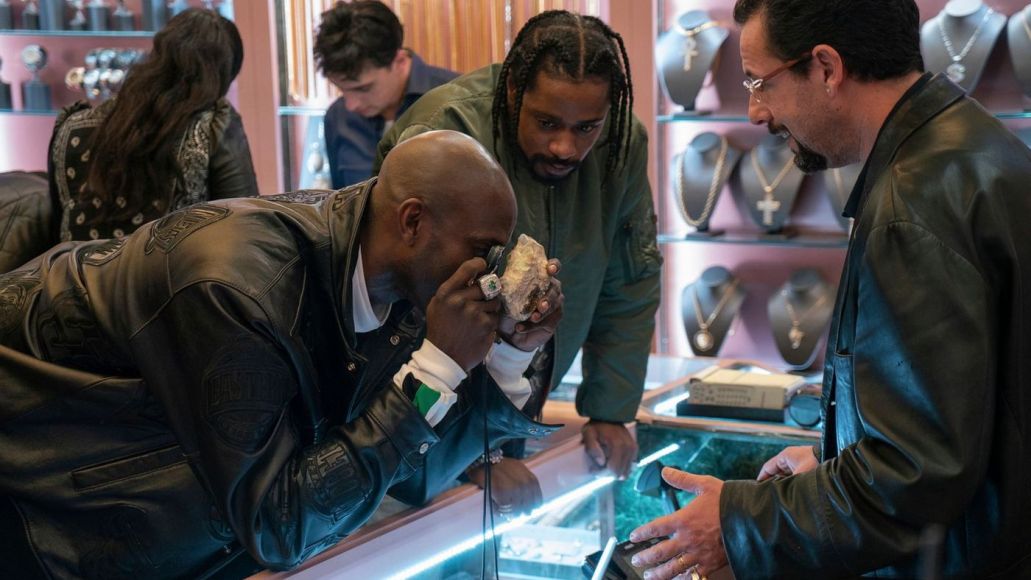 Joshua Safdie: The first drafts are usually imaginative and you do need a certain element of research just to get the stuff on the page, but then the drafts that really cement it as something that’s shootable involves so much research. I’s not like it’s work that you feel like, “Oh, I have to go do this,” it’s actually very fun. You get to moonlight or almost cosplay as a PI. You know what I mean? I remember when I was doing research for the Diamond District, I found myself wearing more jewelry and a different style of clothing so that these people would accept me.

You got into their heads a little bit.

Joshua Safdie: Exactly. And you get into their mind spaces. It’s strange. One of our producers calls it method directing, which I think is a corny thing, but I can understand that. I gamble, I love shooting crap more than anything, but I didn’t have much of experience gambling on sports, so I had to start just betting some sports. But ever since I was a kid, I watched Knicks games as if I had money on it.

Benny Safdie: That’s the key. The goal for us was, “How do you show a basketball game and get people to feel what you felt when you literally care about the first quarter?”

Joshua Safdie: You know how many times I’ve heard someone say, “Do you owe money on this game?”