In 2018, we declared “the end of Bonnaroo as we knew it.” A year later, we named Bonnaroo our Festival of the Year. That head-whipping U-turn reflected significant changes in Bonnaroo itself, ones that we felt put the South’s premier festival back on a track and balanced both its jam-band past and poptimistic present. Ticket buyers agreed; for the first time since 2013, Bonnaroo sold out. There seemed to be a clear lesson at hand, one that all festivals could do well to follow: the best way to build an ongoing live music community is to define your identity and stick to it.

However, with the release of Bonnaroo’s 2020 lineup, it’s clear that festival organizers are ready to stress-test that wisdom. If there’s a takeaway to be learned by scanning this year’s festival poster, it may be that the actual identity of today’s Bonnaroo is being confident enough to not have any set identity at all. 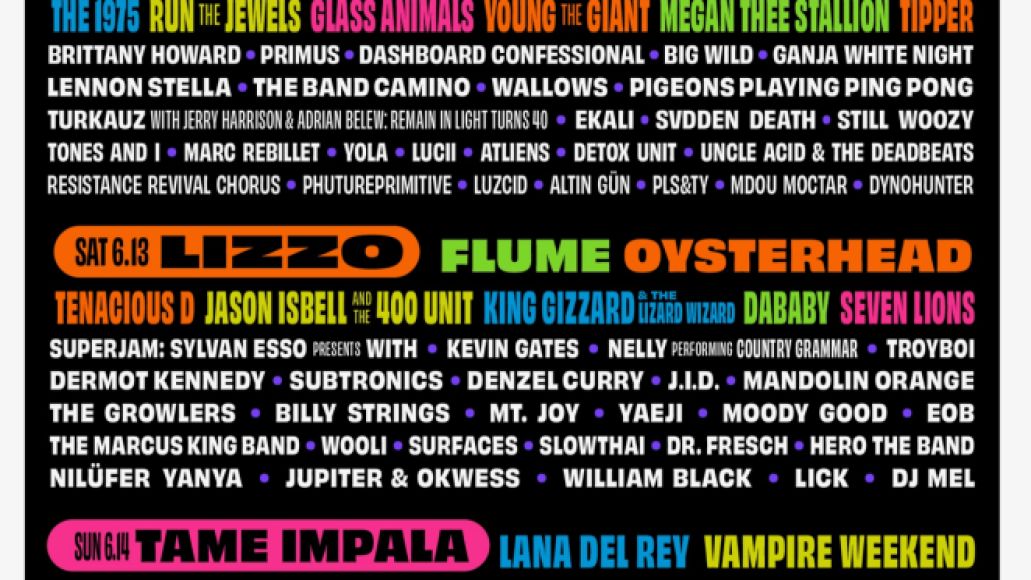 That’s not meant as a pejorative. Instead of embracing death by a thousand glowsticks or leaning even harder into its hemp-covered roots, the 2020 edition of Bonnaroo instead champions the kind of genre-free eclecticism that reflects the increasingly borderless landscape of modern popular music. There’s a little something for everyone at Bonnaroo 2020, whether you’re a jam band diehard (Oysterhead!) or a Fear Inoculum stan (Tool!), a celebrator of Hot Girl Summer (Megan Thee Stallion) or a protestor at the RNC (Run the Jewels!), a sad millennial (Lana Del Ray!) or an Extremely Online Gen-Zer (uh… Oliver Tree?). The lineup is a dabbler’s delight, one that mixes a diverse, disparate set of musical performers into a schedule as kaleidoscopic as a bootleg Phish tie-dye. The result is also one of Bonnaroo’s most critically of-the-moment lineups in years; if you read our list of the Top 50 Albums of 2019, you’ll find nine of those acts represented at this year’s ‘Roo.

That kind of musical omnivorousness is one of the lineup’s biggest strengths on paper, but it may come with some surprising weaknesses in practice. As is true of most festivals, Bonnaroo will live or die by its headliners, whose star power often does the heavy lifting when it comes to ticket sales. This year’s trio each comes with stronger credentials than we’ve seen in recent years: Tool remains on a victory lap from last year’s release of the long-awaited Fear Inoculum, Lizzo translates the meteoric success of Cuz I Love You into an historic turn as the fest’s first female headliner, and Tame Impala finally have new music to back up their status as one of the most reliable festival acts of their generation. 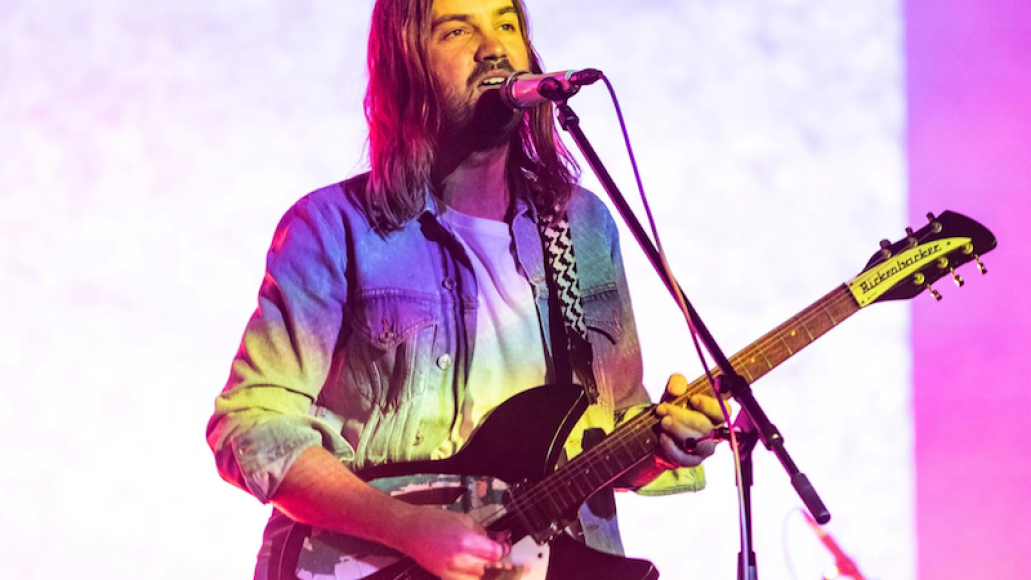 However, for all of the well-earned fanfare, each of Bonnaroo’s headliners also comes with a question attached, ones that will likely determine the festival’s relative success or failure. Will Tool fans shell out for a three-day festival when the band has its own tour dates throughout the South all summer? Does Lizzo’s relatively slim (and already well-toured) body of work warrant regional or national travel from fans? Can a single new album, no matter how revelatory, really make up for the fact that Tame Impala has appeared at more than 70 festivals in the last five years?

If the answers to these questions are “yes,” expect another potential sellout. However, if we get a “no” or two, then the lack of a coherent undercard roster from any of the headliners’ preferred genre might act as a turn-off to any festivalgoer who remains on the fence.

After a stellar comeback in 2019, Bonnaroo has earned a little leeway in 2020. Attendees at this year’s festival will be walking into a high-risk, high-reward experiment, one that finds the festival drawing on a ticket-buying pool that’s broader than it is deep and banking on fans coming for the spectacle with open minds, piqued curiosity, and $300 a ticket. Will those fans show up? If they do, we hope they remembered their tents. 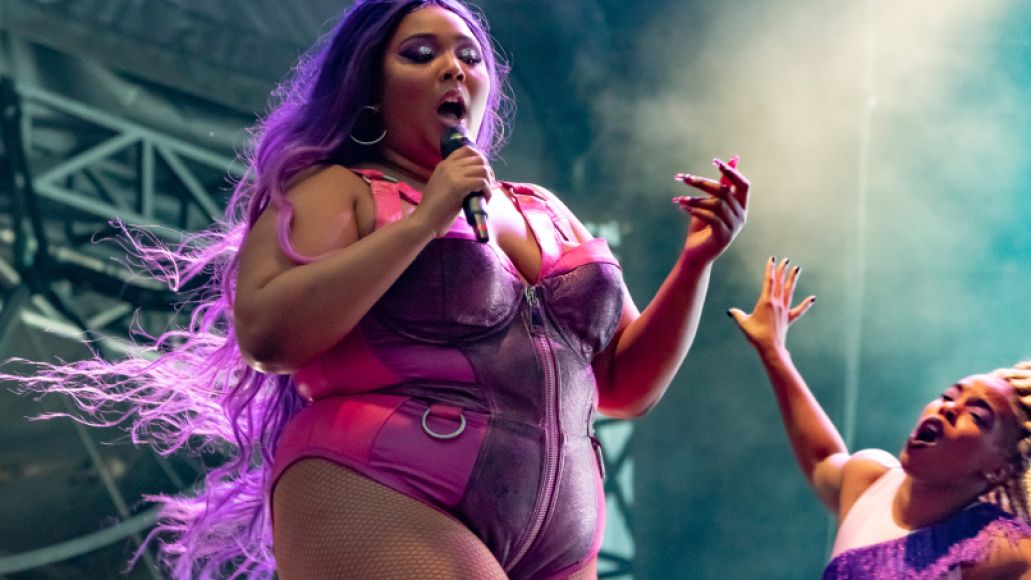 It’s taken nearly 20 years, but Bonnaroo is finally starting to catch up to the trends of gender equity in festival booking. When Lizzo takes the stage in Manchester, she’ll do so as the first female headliner in the festival’s history. It’s an historic choice for numerous reasons, one that’s a win for both women of color and Lizzo herself; although she’s experienced a jet-fuelled shot to the top over the course of the last year, she remains untested as a headliner, so her selection represents a vote of confidence in both her existing work and the songs that are yet to come. For Bonnaroo, the move is welcome, if overdue; the fest has lagged near the bottom of gender balance for years, with the 2018 edition coming in at 16th out of 20 in Pitchfork’s exhaustive breakdown from that spring. 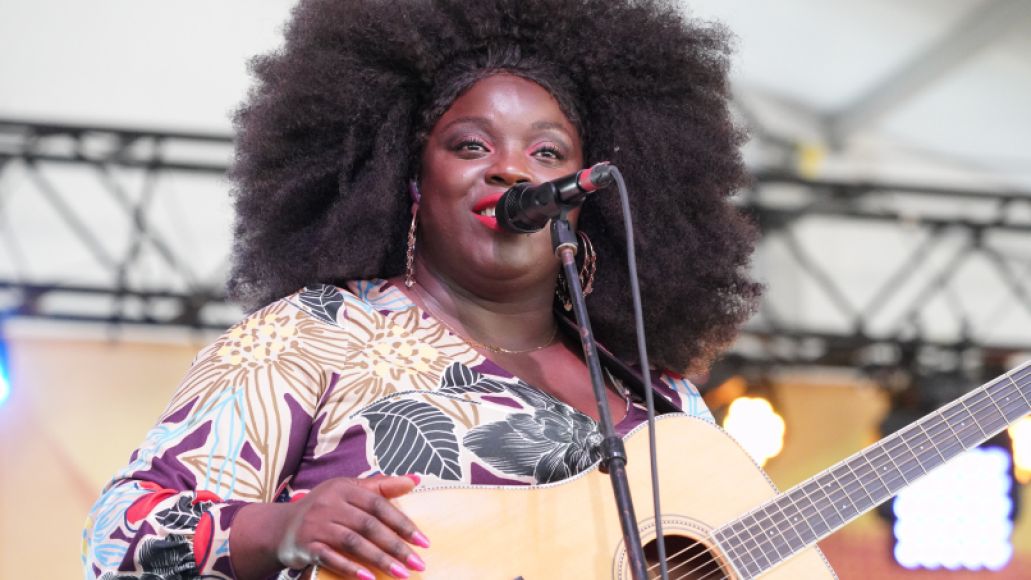 The Grand Ole Opry returns for a third year in a row as Bonnaroo’s Thursday opener, bringing with it both traditional Nashville talents and a few cross-genre guests (including CoS favorite The Regrettes, who’d better show up wearing matching rhinestone cowboy hats). However, the most exciting country music of the weekend comes later in the schedule, and in spite of not featuring big names like Sturgill Simpson or The Highwomen. After spending the ’10s releasing a set of underheralded masterpieces, Jason Isbell is probably the biggest Americana draw on the poster, but don’t sleep on two smaller-text artists putting their own spins on the sound: Orville Peck croons like Roy Orbison trapped in his own fever dream while British import Yola does some of the best country-soul this side of Memphis.

The Return of Pinegrove 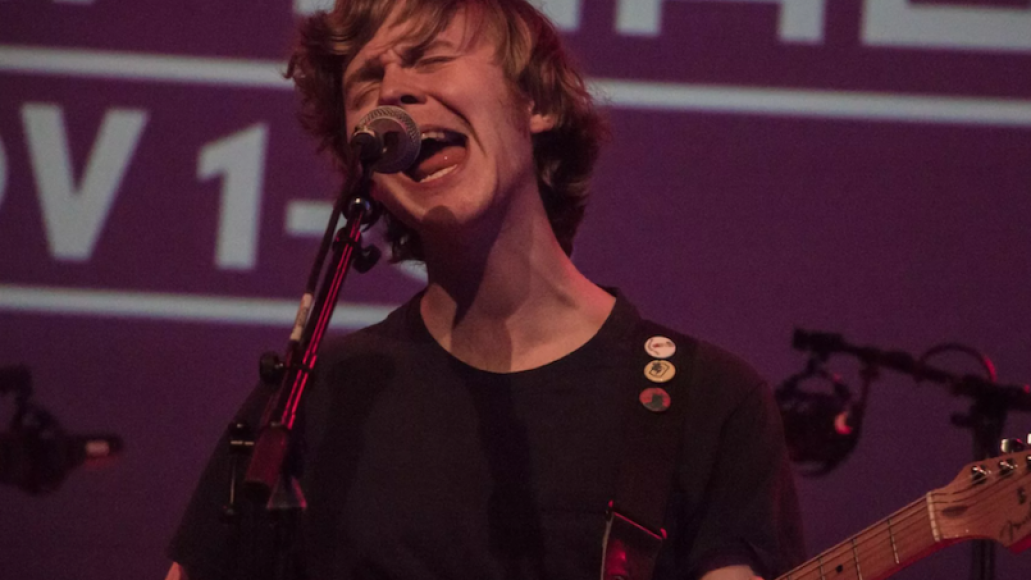 Since sexual misconduct charges against Pinegrove frontman Evan Stephens Hall emerged in 2017, the New Jersey indie band has kept a relatively low profile; they quietly self-released their third album Skylight in 2018 after being dropped by label Run for Cover and confined their touring schedule to headlining dates in front of friendly audiences. Now, as they prepare for the release of their new record Marigold, the members of Pinegrove will also return to the stage of a major festival for the first time since Iceland Airwaves 2017. Outside of the confines of a club full of fans and in front of its biggest crowd in years, how will the band be received? 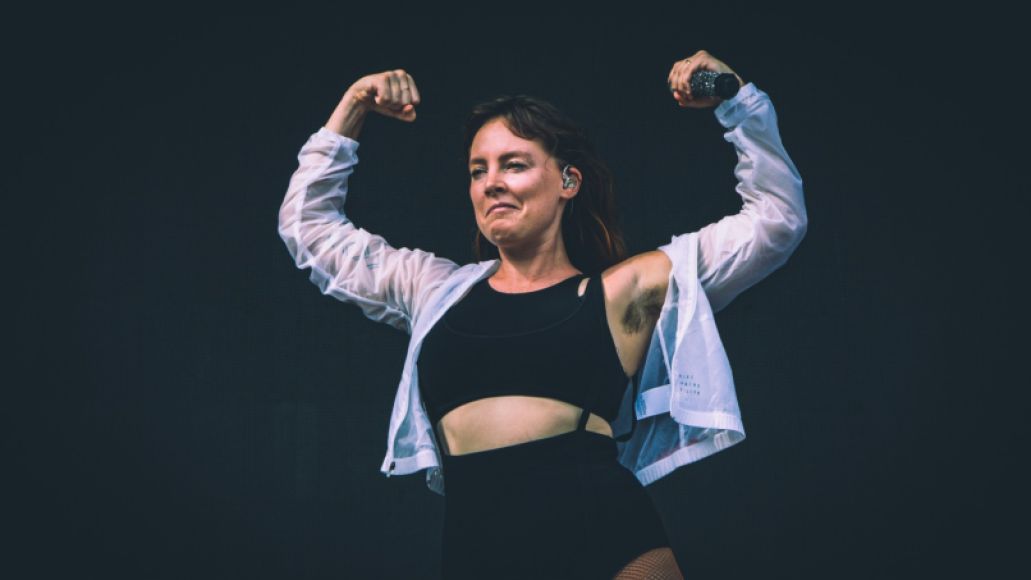 Bonnaroo’s annual Superjam reliably produces some of the festival’s biggest surprises and most memorable moments. This year, the act selected as ringleader is none other than Durham, NC’s Sylvan Esso. Judging by the poster, the duo of Amelia Meath and Nick Sanborn will be bringing their 2019 “Wish Tour” with them to Bonnaroo. With stops in Los Angeles, New York, Nashville, and Durham, the limited-run tour found Meath and Sanborn presenting new full-band arrangements of Sylvan Esso hits with the help of guests from Wye Oak, Bon Iver, Hand Habits, and Mountain Man. Expect all those (and maybe more) when the tour hits Bonnaroo. (Speaking of jams: though the Superjam rightfully gets most of the press, we’re as intrigued or more by Brooklyn funk nine-piece Turkauz’s 40th-anniversary tribute to the Talking Heads classic Remain in Light. With appearances by Heads member Jerry Harrison and touring guitarist Adrian Belew on the schedule, the set feels poised to rule.)

Does Vampire Weekend Count as a Jam Band Now? 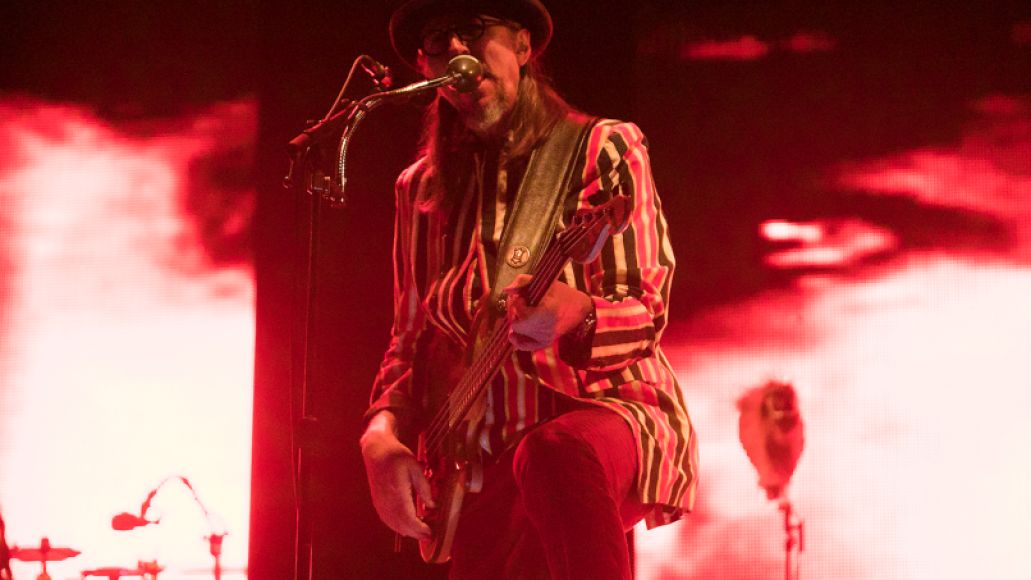 Primus perform at The Forum, photo by Raymond Ahner

Although they occupy some lower-key spots than Phish’s headlining turn in 2019, there are still jam bands to be found within the entries on Bonnaroo 2020’s poster: you’ve got your Primus, your Tipper, your Pigeons Playing Ping Pong. Hell, Trey himself will be onstage again this year for the reunion of Oysterhead’s famed power trio. However, the lineup’s biggest jam band dark horse might be hiding in plain, pastel sight. One of the biggest strengths of 2019’s Father of the Bride came from Ezra Koenig and company’s willingness to shaggy up their sonic palette and embrace their inner Grateful Dead fans. If they turn in a 26-minute version of “Harmony Hall” this June, we won’t be surprised (but we will be delighted). 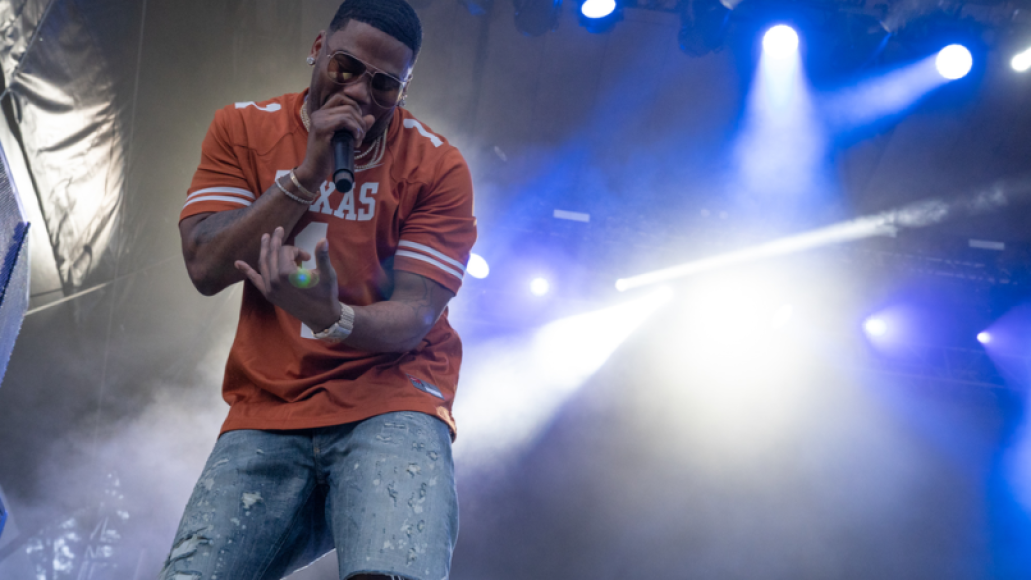 Bonnaroo 2020’s hip-hop lineup mostly follows the old adage I just made up: when in doubt, do what Coachella does. You’ll find plenty of overlap between those two festivals, where fans can catch sets by firebrands Run the Jewels and slowthai, Hot Girl Summer impresario Megan Thee Stallion, and up-and-comers Denzel Curry and DaBaby. Despite the similar roster, Bonnaroo does boast two exclusives of its own in the form of a recently platinum-certified Young Thug  and St. Louis rap throwback Nelly, who’ll treat crowds to a full-album performance of his 2000 breakthrough, Country Grammar. Oh cool, so that means there are kids in college who weren’t alive when “Ride Wit Me” came out. Huh. Welp, gotta go. Every bone in my body just turned to powdery, powdery dust!

Can Bonnaroo 2020 Be Everything to Everyone?