It’s not uncommon for modern musicians to explore majorly divergent styles across successive records. Be they relatively popular darlings like Björk, Sufjan Stevens, Radiohead, Sia, and Beck or lesser-known greats like Devin Townsend, Anathema, Steven Wilson, Opeth, and even Kid Cudi (via his WZRD project, at least), these creators typically strive to change things up significantly from collection to collection. Even so, the stark and special contrasts between Bright Eyes’ simultaneously released I’m Wide Awake, It’s Morning and Digital Ash in a Digital Urn warrant acclaim and examination on the 15th anniversary of their arrival.

Both LPs came out on January 25, 2005, and they undoubtedly share mastermind Conor Oberst’s knack for endearingly confessional and relatable singer-songwriter humility. That said, they vary greatly when it comes to tone, production, and arrangement. In a nutshell, Wide Awake generally aligns with its full-length predecessor and that record’s follow-up — 2002’s Lifted, or The Story Is in the Soil, Keep Your Ear to the Ground and 2007’s Cassadaga, respectively — as a textbook example of warmly subdued folk/indie rock and alternative country. On the other hand, the colder Digital Ash seems more like a polished nod to Bright Eyes’ earliest sequences in terms of electronic adventurousness and other eclectically dense instrumentation. Together, they paint a compelling picture of how consistent yet wide-ranging, experimental, and ambitious Oberst and company were at that time. 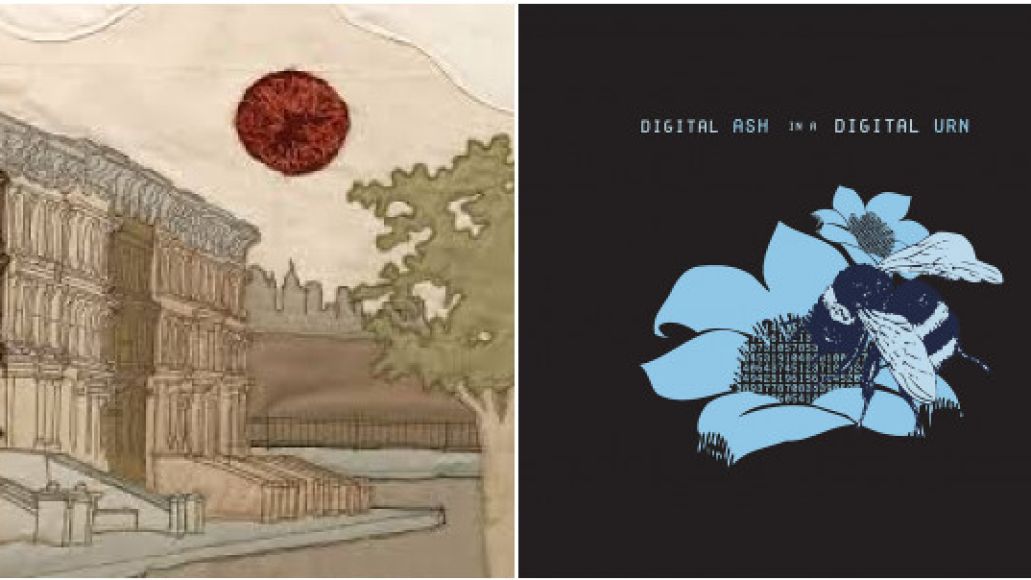 Undeniably, the group entered the studio in February 2004 with high expectations since Lifted propelled them even further into the limelight, with publications like Time, Rolling Stone, and Spin declaring them an important “new artist.” Furthermore, Lifted was their first project to make the Billboard 200, spending a week at No. 161 after selling roughly 13,000 copies, which led to their first national television performance (on Late Show with David Letterman). Of course, the ensuing tours heightened their exposure, too, especially in October 2004, when they joined the Vote for Change tour alongside heavy hitters like Neil Young, Babyface, Dixie Chicks, CSNY, Bruce Springsteen, and My Morning Jacket. Add to that Lifted’s sleek production and expanded palette and it’s clear that they had a lot to live up to. Fortunately, they were more than up for the task.

Naturally, the discs were created with the help of many other musicians. While multi-instrumentalist and producer Mike Mogis worked on most of the prior efforts, he wasn’t considered a formal member until Wide Awake and Digital Ash. Likewise, trumpeter and composer Nate Walcott came aboard here and completed the official Bright Eyes trio. Similarly, pianist Nick White, vocalist Maria Taylor, multi-instrumentalist Andy LeMaster, and drummers Jason Boesel and Clark Baechle also pop up on both LPs. Outside of them, several other players contributed to either Wide Awake or Digital Ash.

Commercially, the pair fared predictably well, with Wide Awake and Digital Ash peaking at Nos. 10 and 15, respectively, on the Billboard charts. In 2013, the former became the first Gold record for Bright Eyes — and label Saddle Creek — after selling 500,000 copies. Although it never reached that level, Digital Ash was certified gold by the Independent Music Companies Association in 2007 for selling at least 100,000 units (it has since sold a bit less than 300,000). Interestingly, one track from each record — “Lua” from Wide Awake and “Take it Easy (Love Nothing)” from Digital Ash — was issued as a single on October 26, 2004; together, they reached the top two spots on the Billboard Hot 100 Singles chart.

The albums were critically successful as well, earning high remarks from Pitchfork, Entertainment Weekly, NME, and Los Angeles Times, among others. In fact, Wide Awake eventually appeared on several ‘Best of 2005’ and ‘Best of the Decade’ lists; however, Digital Ash proved to be a relatively divisive work, receiving far more mixed reviews overall and less support than Wide Awake from places such as Blender and Spin. Unfortunately, it remains underappreciated, with a current Metacritic score of 66 alongside Wide Awake’s 85.

In any case, Bright Eyes spent the subsequent months touring each album separately across the world, with the appropriately more intimate Wide Awake portion coming first. When asked why the band decided on this approach, Oberst admitted, “It wouldn’t make sense, in terms of equipment and people, to play the songs from both albums at the same time … So we decided we’d basically go on tour twice and play the same places.” Along the way, they shared the stage with labelmates The Faint, as well as Rilo Kiley, Mars Black, and R.E.M. They also played the Greenfield, Roskilde, and Coachella festivals, and the Wide Awake part of the tour was documented on their only live album, 2005’s Motion Sickness: Live Recordings.

Unsurprisingly, Wide Awake and Digital Ash are still wonderful, and since Wide Awake is the more popular one, we’ll begin with it. Like its two immediate predecessors, it begins with a spoken-word passage leading into a modest acoustic ode; however, “At the Bottom of Everything” is clearer, faster, and perkier than those prior starting points. Oberst is charmingly down to earth as he tells the story of two strangers who bond as their plane crashes; from there, he segues into an upbeat social commentary on American ideals and ironies via unassuming rhyming schemes, chipper chord progressions, and a mix of humble and impassioned singing. It’s an invigorating and enriching opener that foreshadows the discreet, yet gripping, singer-songwriter trajectory of the rest of the collection.

Afterward, periodic horns and Emmylou Harris’ matter-of-fact accompaniment ensure that “We Are Nowhere and It’s Now” and “Land Locked Blues” are sobering and subtly infectious gems. Pieces like the dramatic “Old Soul Song (for the New World Order)”, the hypnotically hearty “Train Under Water”, and the sing-along frenzy of “Another Travelin Song” evoke the Americana vibes of post-Picturesque Decemberists. Of course, the aforementioned “Lua” is hauntingly resonant, as Oberst uses only his guitar and dejected voice to explore a couple battling addiction (“And if you promise to stay conscious/ I’ll try to do the same/ Well we might die from that medicine/ But we sure killed all the pain”).

“First Day of My Life” conjures the bittersweet remembrances of The Dear Hunter, whereas the penultimate “Poison Oak” is perhaps the most atmospheric and dynamic tune here, oscillating between sparse reflections and explosive revolt with pinpoint precision. Arguably the greatest feat of Wide Awake, though, is closer “Road to Joy” as it retools Beethoven’s masterpiece beneath a thrilling finale that finds Oberst screaming the album’s title beneath raucous orchestral and rock music flourishes. In doing so, it also serves as the culmination of the album’s repeated allusions to consciousness and daybreak.

Conversely, Digital Ash is very much a nighttime experience. It’s bleaker and opaquer from the jump, too, with “Time Code” offering a disturbing collage of sounds, such as heavy breathing, panicked footsteps, electronic chaos, and entangled voice clips, surrounding Oberst’s ghostly and cryptic proclamations (“Drink liquid clocks ’til I see God/ Crystal display. Can’t turn it off”). Immediately, the LP announces itself as the opposite of its sibling: an ingeniously impenetrable and disjointed investigation with few clear answers.

Granted, a few selections — “Gold Mine Gutted”, “Arc of Time (Time Code)”, and “Hit the Switch” — wouldn’t have been too out of place on Wide Awake; but, the majority of the sequence upholds the spirit of that initial chill. For instance, “Down in a Rabbit Hole” is mesmerizingly dreary and symphonic, with robotic percussion, mournful strings, screeching guitars, and other bizarre tones giving a film noir quality to Oberst and Maria Taylor’s harrowing observations. Next, the background of “Take it Easy (Love Nothing)” veers toward EDM, providing a blunt but befitting and dazzling juxtaposition to the poppy songwriting on top. Eventually, “I Believe in Symmetry” brings delightful destructiveness to the proceedings; “Devil in the Details” presents a fascinating hodgepodge of interlocking timbres; “Ship in a Bottle” induces multifaceted fervor and sorrow amidst the troubling cries of an infant; and “Light Pollution” induces the buoyant edge of early Death Cab for Cutie. It transitions seamlessly into the impressionistic beauty of the penultimate “Theme from Piñata” before “Easy/Lucky/Free” wraps up Digital Ash on a plucky, lush, and hopeful note (even with distorted screams tying it back to “Time Code”). Overall, it’s the more challenging, sophisticated, and brave of the two records, and it’s all the better for it.

Fifteen years later, I’m Wide Awake, It’s Morning and Digital Ash in a Digital Urn are still exceptional self-contained statements, with each contributing their own treasurable characteristics. Yet, it’s the ways in which they connect and deviate that make them most rewarding as two halves of a collective vision. Combined, they reveal not only the wide array of techniques and styles that Oberst and company were tuned into at the time, but also their larger goal of touching upon the highs and lows of the human condition and the world around them. Few, if any, of their peers ever achieved such an accomplishment.