As you know by now, 2019 brought us a lot of excellent television. Many serious power-players jockeyed for attention, influence, and eyeballs. Some dominated awards. Some dominated the conversation on social media. Some just wanted you to toss a coin to your Witcher. But only one series was ever going to be our No. 1 boy: Succession.

To call Jesse Armstrong’s sharp, acidic comic drama “timely” would be a hell of an understatement, and not just when it comes to the impending heat death of media. Remember Connor’s Instagram announcement of his Presidential bid? Succession also became one of the first post-#MeToo artistic explorations of the complicity of powerful women within an oppressive system, showed how easily progressive ideals can come tumbling down in the pursuit of money and influence, and reminded us that you can’t make a Tomlette without breaking a few Gregs.

It’s an of-the-moment story with Shakespearean roots, a comedy about reprehensible people that’s also a tragedy about broken souls, a family saga and a tale of corporate intrigue and errors in one. And with that final press conference of Kendall’s (Jeremy Strong), it gave us the most thrilling TV moment of the year. In celebration, Consequence of Sound spoke with Armstrong about his remarkable series, Strong’s exemplary performance, and all the questions he’d rather you ask yourselves about the show. 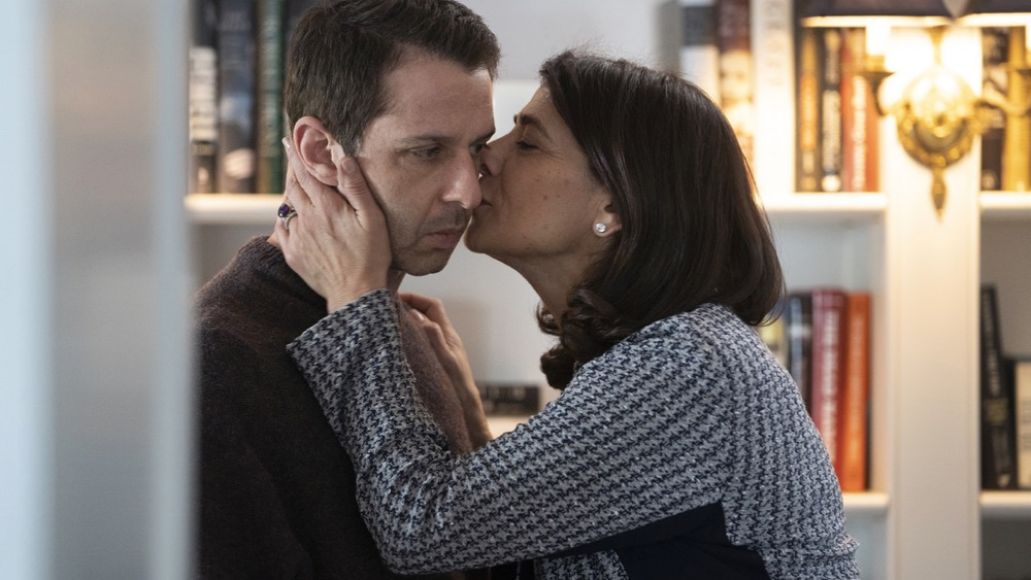 I’ve been thinking a lot about two moments in consecutive episodes—first, Kendall washing his water glass in “Return”, followed by the Dundee rap. And those moments would on the outside seem to be fundamentally different, but there’s something about them that seems very linked. What is it about that character that allows for such extremes, and how do they all fit within this one very complicated person?

I know what you mean. There’s a big Kendall variation within the show overall in the kind of stuff we try and achieve, and those are two very different moments, aren’t they? And it behooves me to say they wouldn’t be possible with Jeremy Strong’s level of engagement with the character, because if you did [those scenes] and pulled back, especially on the rap, and did it kind of in a self protective way, it could fall flat. But instead, I think if you enjoy that moment, which I do, [it’s because it’s] fully inhabited. Excruciatingly embarrassing, but also very real.

It’s something we come back to again and again: What did it really feel like? What’s the real nature of this family and of their influence in the world? And how does that make you feel? What’s the reality of this moment? And I guess both of those moments are fully inhabited. One is very tragic and very weighted, heavy, desperate. Hopefully you can view it with those feelings you have when something very sad happens, the way that the world contracts, and your attention can go down to something rather small and it can become continually important to do one small task correctly or efficiently.

And then the other moment is really, just as you said, the exact opposite. It’s a sort of grandiose gesture, where you lose yourself and the part of your brain which is saying, “this is desperately embarrassing.” You’ve completely turned that off because you’re kind of lost in the grandeur of your own gesture. It’s almost a manic quality there, of “If I completely go for this, it’s not embarrassing.” Very rich people or very powerful people have the capacity to indulge their own fantasies or manic highs to a degree that other people can’t. 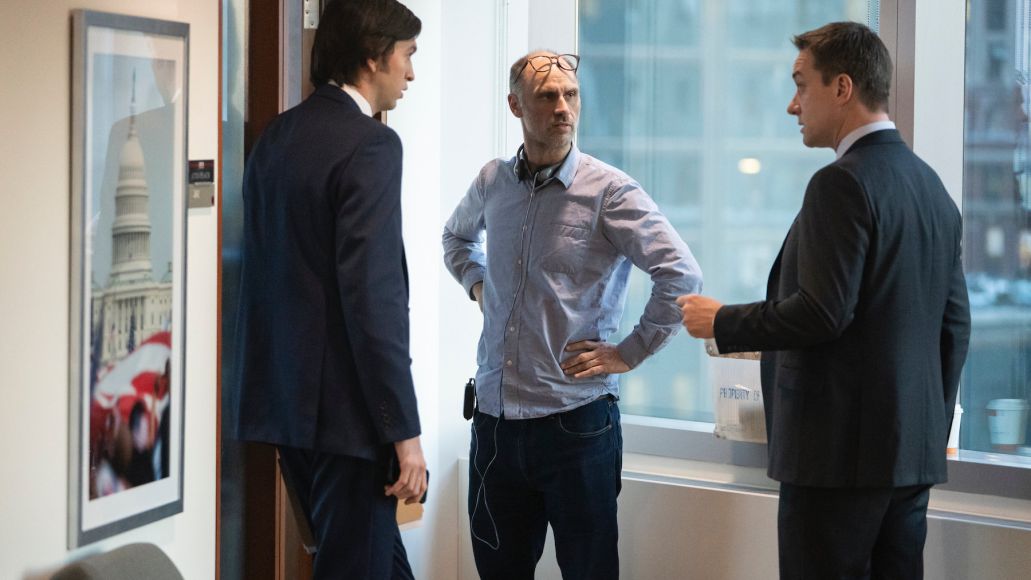 Jesse Armstrong on the set of Succession (HBO)

When you’re casting, how do you know when you’ve found an actor who can handle that tonal balance?

Yeah, that’s an interesting question. Sometimes if it’s a recurring role, they might come in and read with Kieran [Culkin] or Jeremy or with Sarah to see whether it feels like everyone’s in the same tonal world. And then also, because we have a degree of freedom in our production, the people who feel like they fit well in this world, we like to [find ways to keep them around].

We can’t always do it because sometimes the plot demands things that we then have to achieve, but we have the flexibility in terms of saying, “hey, this character really seemed to fit into the world and opened up this avenue for the writers.” So we can cut across to fit what we’re wanting or plans we’re having.

Is the same true when you’re talking about actors like Holly Hunter and Cherry Jones, or are those roles crafted with those performers in mind?

I don’t think we’ve ever [written] yet with a specific actor in mind. With Rhea, it wasn’t written for Holly, but she was the first person who we asked once we had the character. You don’t ask someone like that to audition, but I think you just know from their work that they’re able to do both] the comedy and the drama of the part. And that’s just being an actor who inhabits every element of the experience. 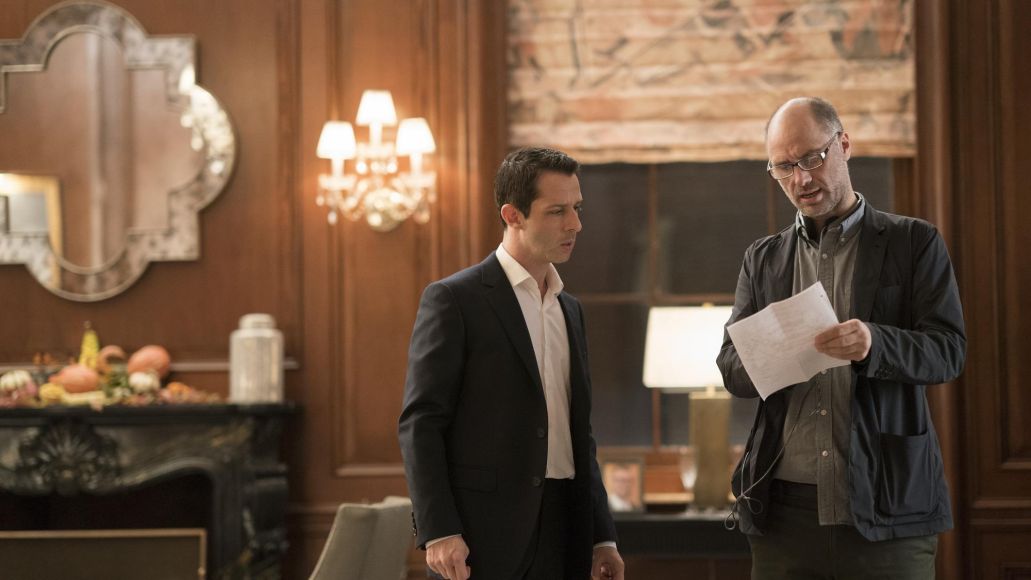 Jesse Armstrong on the set of Succession (HBO)

You may not want or be able to answer this, but is there a point in the season at which the seed for that final press conference is planted? Is there a moment when Kendall I guess sort of wakes up, for lack of a better term?

Well, I think you’re right that I wouldn’t want to say, but I think I and my fellow writers in the writers’ room would have a pitch on when that was. It’s one of those questions of human interpretation. If [someone watching] had a different view, I wouldn’t necessarily want to say they were wrong.

Kendall in “Tern Haven” talks to Naomi about the Pierce sale as being a way out for her. Is that what this is for him? Has he found an escape hatch?

I think you make a good, strong analysis. It is a little bit boring, but I resist jumping in and saying exactly what I think happened or happens, or what the reason that those things are like, just because oh, I love it when people engage with the show to the extent that they have feelings about those things and I wouldn’t want to…

It’s like after a party, if you’re discussing what happened with someone, it can be rather irritating if they demand to tell you what every person at the party is really like. You have your own views, don’t you? And I think those are the perfectly valid interpretations. But I think yours is a good interpretation. 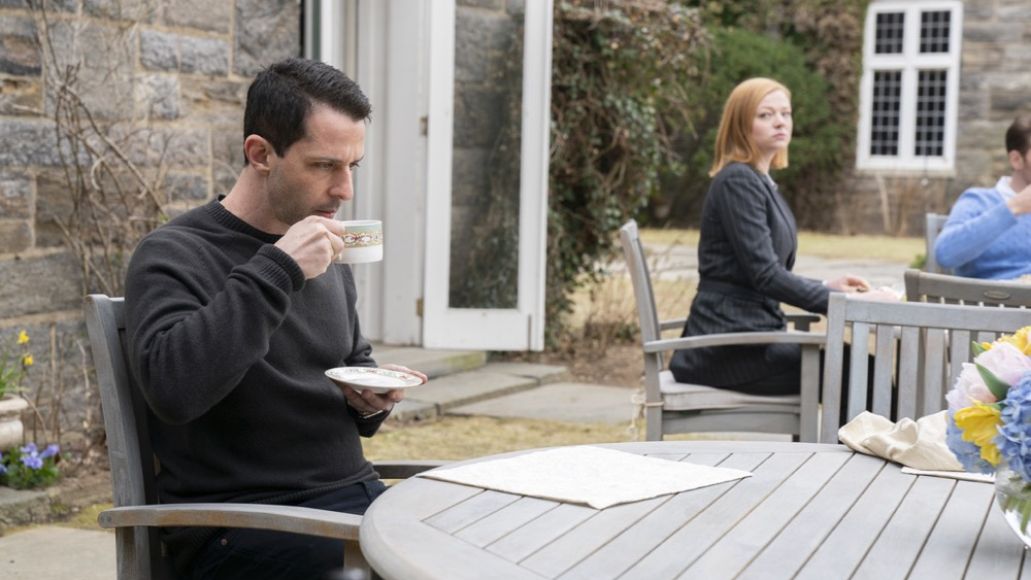 We talked a little bit about the tonal balance, but how do you balance in the writers’ room showing us how broken and vulnerable these people can be with what absolute monsters they can be, because sometimes those two things seem to be happening at the same time?

We don’t have a rule, like if we have this much venality, we must have this much virtue or inanity. This is what I like to think we do: it’s as if we kind of follow [the Roys] around with a notebook and see what they’re up to, and because they’re human beings. They have different modes of being, people, and they have different actions in different situations. So hopefully, that stuff flows from them being realized versions of characters.

I won’t ask you how we should feel about Kendall as viewers, but how do you feel about him? Do you feel protective of that character? Do you have hope for him?

That’s a good question. I think we feel, the adjective which springs to mind, is interested. I’m very, very interested in him. That’s the way I think we feel about the characters, and [that helps us to] navigate the likeability question, which we’ve sometimes been asked about these characters who do and say such tough things.

I’m not super concerned in the end with whether they end up as likable or unlikable, but our duty is to always make sure that they remain interesting to viewers, and that we give enough information so that their choices don’t seem arbitrary, or like they take place without any logic, or they’re acting simply because we want to see what they can get up to.

On surprises, Gerri and Roman, and our inevitable doom 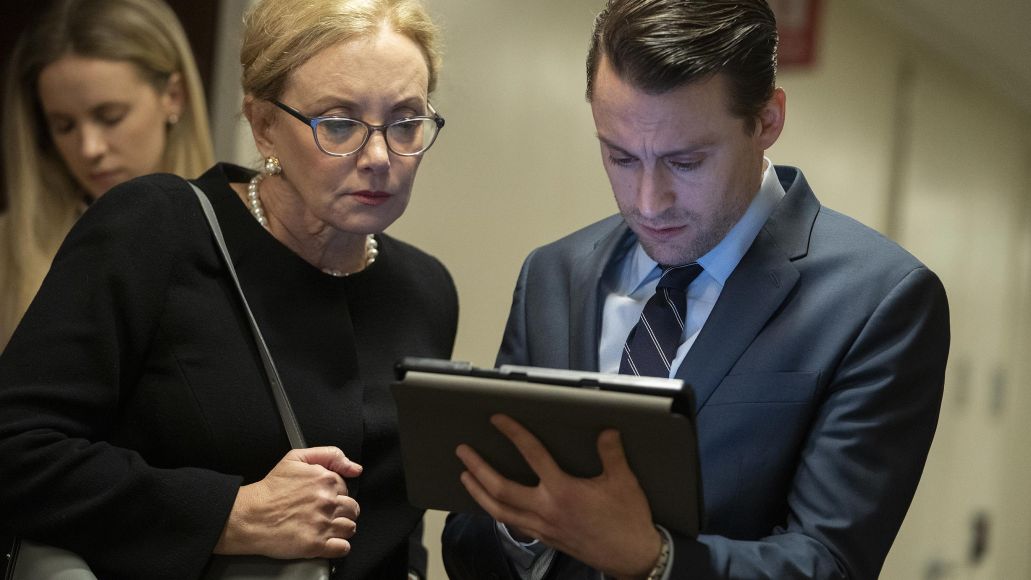 Gerri and Roman in Succession (HBO)

How did the Gerri-Roman relationship come about? How often do the characters find ways to surprise you?

Well, Gerri and Roman [have been in the works for awhile.] It’s almost as if it was demanded by the characters in the story. So that was very pleasing. That’s what we we’re always looking for, the thing that’s both surprising, but completely natural. It’s no fun for us or for the audience if it;s like, “Well, you surprised me, but it’s because that would never happen.” And that relationship [as it developed] felt both surprising but totally natural, like hopefully some other reveals of character in the show. So that’s a good one.

I guess on a much more basic level, that thing in the family therapy episode [season one’s “Austerlitz] where the therapist has to leave the premises because he jumps into a pool that’s too shallow and busts up his teeth? That was a surprising turn that we came up with in the writers’ room. It felt very natural in a way that we couldn’t precisely explain, but it was like the hand of God reaching down in an agreeable way, adding that kind of resonance of what life feels like, rather than just a TV show with some twist.

[laughs] It’s certainly the most pure in terms of desire.

Is it possible, in your opinion, for someone to be that kind of rich, insanely rich, and a fundamentally decent human being at the same time?

That’s a good question. Yeah. I mean, I’m not a biblical scholar, but it says it’s harder for a rich man to enter the kingdom of heaven than it is for a camel to pass through the eye of a needle. It doesn’t say it’s impossible, but it says it’s really hard. I think, yeah, they’re not mutually exclusive. I don’t think they’re mutually exclusive, and power is more potentially toxic than money, but the money is very difficult to handle and poses a big moral hazard in a world where there’s so much inequality.

Showrunner of the Year Jesse Armstrong on Succession's Surprises, Relationships, and Burning Questions