This review is part of our Sundance 2020 coverage.

The Pitch: Living somewhere between a concert film, a mockumentary, and a really unstructured Portlandia episode, The Nowhere Inn starts as avant-garde pop artist St. Vincent, aka Annie Clark, commissioning Sleater-Kinney’s Carrie Brownstein to craft a documentary about her latest concert tour, dovetailing into glimpses into Clark’s real-life backstage persona. But right away, Brownstein runs into a problem: the real Clark is boring, a modest void of ab workouts and demanding critics. Self-conscious about her own drudgery, Clark decides to bring a bit more St. Vincent into her real life in the doc, leading her and Brownstein down a rabbit hole of affected pop star performance.

Strange Mercy: St. Vincent’s a hard nut to crack — comic Chris Fleming likens her music to “a supercomputer writing a jingle for a ski resort” — and The Nowhere Inn is a half-baked attempt to both cut through that perception and paradoxically reinforce it. In the first half, The Nowhere Inn shows potential as a droll confrontation of the larger-than-life expectations of the public, and the ways stardom forces you to live the lie of your on-stage persona.

And yet it’s also a story of fractured friendship and colliding artistic intentions: Brownstein and Clark, longtime pals and collaborators, clash over everything from crafting the perfect moment to the looming specter of the co-written song they’ve decided will close the film. But as Brownstein’s visible disappointment over the lackluster nature of the film she’s creating builds, Clark’s attempts to spice up their film take her to strange, calculating places.

Suddenly, she’s wearing St. Vincent-y clothes backstage, speaking in a self-serious alien affect (“I want to disrupt the senses!”), and tricking Brownstein into filming a live sex act with her and on-screen girlfriend Dakota Johnson, whose spirited cameos make for the doc’s most hilariously strange moments. 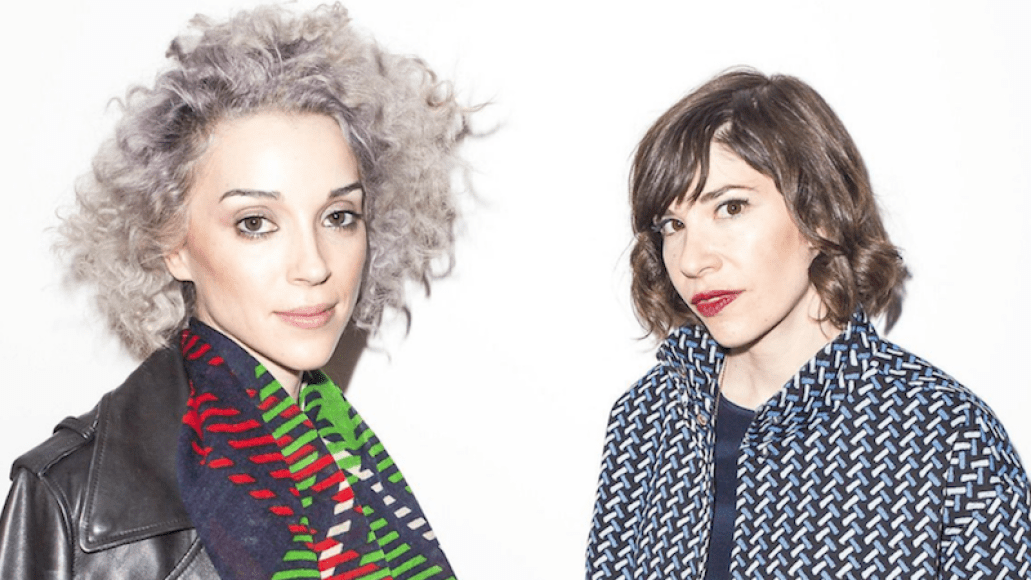 Persona Non Grata: The feature debut of frequent Portlandia director Bill Benz, The Nowhere Inn at least has the visual style to match its frenetic mishmash of tones, even if it doesn’t all hold together narratively by the end. DP Minka Farthing-Kohl flit between crisp 2.35:1 filming for the primary story, grainy 16mm when we’re seeing things through Brownstein’s camera, and even lets us in on tiny cell phone videos and ginned-up home footage of the pair’s pre-fame friendship. Dramatic zooms and comically-timed cutaways to lend more ridiculous context to a tightly-framed scene work wonders.

Laughing With a Mouth Full of Blood: But it’s in the second half that the film starts to lose the script, and veers too winkingly into Persona, Inland Empire-like territory. Eventually, any attempts at structuring the doc, for both Benz and Brownstein, fall short, and Nowhere Inn devolves into Clark’s increasingly fevered attempts to confuse and entertain her fanbase. Suddenly, the fourth wall is crashing down with rocket force, and every new layer of absurd artifice feels like a half-dozen hats stacked atop one another.

Sleater-Kinney on Why They Love Synths Now

The Verdict: Try as it might to blend the music-conscious idiosyncrasies of Portlandia with the varied persona of one of our weirdest, most valued artists, The Nowhere Inn ends up going, well, nowhere. And, yes, one gets the distinct sense that this is the point — that attempting to understand the complex, high-pressure life of a popular recording artist is a futile gesture, and the demands of fame will break apart even the strongest friendships.

That much is clear in Benz’ swing-for-the-fences work, and Clark’s remarkably layered performance. But the ruse gets old fast, and by the millionth time Clark has frustrated Brownstein with one sub-Madonna stunt after another, we’re left wondering if this wouldn’t have been snappier as a half-hour Portlandia episode.