By the time Bridge Over Troubled Water arrived on January 26, 1970, Simon & Garfunkel had cemented themselves as arguably the supreme pairing in American popular music. After all, their prior four studio albums contained a multitude of enduring pieces — “A Hazy Shade of Winter”, “Bookends Theme”, “The Sounds of Silence”, “Mrs. Robinson”, and one of the chief compositions of the last century, “Scarborough Fair/Canticle “, among them —that demonstrated virtually unmatched songwriting, singing, social consciousness, and eclectic instrumentation. Although they’ve undoubtedly inspired countless proteges in their wake, there has never been and will never be another Simon & Garfunkel, and their last studio effort together is perhaps the greatest goodbye they could’ve delivered.

To be fair, they didn’t go into the studio with producer Roy Halee knowing that it’d be there swan song; still, it seemed the inevitable outcome considering how tense their partnership had become since 1968’s Bookends. A primary catalyst was Garfunkel’s role in Mike Nicholas’ adaptation of Joseph Heller’s Catch-22, which took longer to film than expected. As the making-of-documentary The Harmony Game reveals, Simon was a bit frustrated by that — especially since he was supposed to be in it, too — and with other creative frustrations mounting behind the scenes, it was almost inevitable that they’d break up by 1971.  Nevertheless, Bridge Over Troubled Water, like many other finales from influential artists (namely, The Beatles’ Let It Be), symbolized the end of both the group and a large part of the cultural and political zeitgeists they represented.

As usual, Simon & Garfunkel enlisted plenty of noteworthy Wrecking Crew musicians to flesh out the LP, including bassist Joe Osborn, guitarist Fred Carter, Jr., drummer Hal Blaine, and keyboardist Larry Knechtel. In addition, Los Incas provided Peruvian instruments, Charlie McCoy added bass harmonica, Buddy Harman filled in other percussive roles, and Jon Faddis, Randy Brecker, Lew Soloff, and Alan Rubin bolstered some brass. Thus, Simon & Garfunkel had possibly their largest and most diverse arsenal of musicians yet to complement their already exquisite voices, complex guitar playing (at least from Simon), and internal sense of melody and structure. Together, they created an immensely varied sequence in terms of both arrangements and tonal shifts, infusing their folk-rock base with many other styles.

Honestly, there’s not much to say about the creation of Peter Powell’s front and back photos. However, there’s plenty to analyze when they’re taken in context and retrospection. Whereas the prior Simon & Garfunkel records featured the duo looking straight at the camera — and thus, at the listener — in various degrees of whimsical welcoming, Bridge Over Trouble Water finds them more world weary and disconnected. Specifically, Simon no longer looks boyish and innocent; instead, he seems more matured, unkempt, and disinterested, looking past the camera to imply that he’s already prepared to carry on with other ventures. While Garfunkel remains focused on the viewer, it’s only his eyes that convey any expression, and frankly, he looks deadly serious, if not a bit sullen. As for the imagery on the back, it’s an interesting parallel to the front of Sounds of Silence in that both feature them walking somewhere. Yet, they seem united and eager on Sounds of Silence, inviting us to tag along on their journey. On the other hand, Simon is literally slumped and pushing Garfunkel out of frame on the blue back of Bridge Over Troubled Water, perhaps implying that they’re both already “over it.” 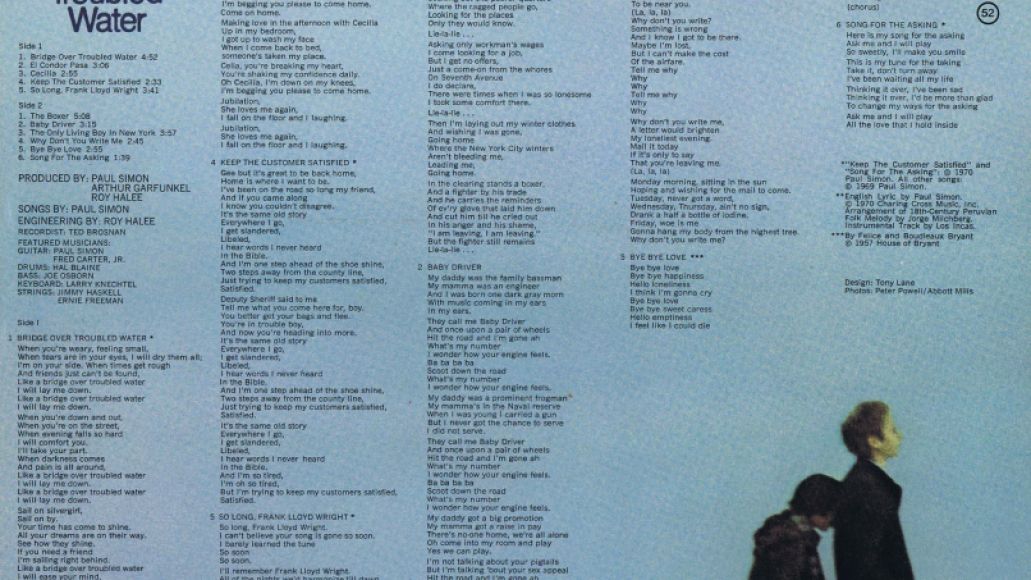 In any case, the album was a critical and commercial triumph upon release. It peaked on nearly a dozen charts internationally — including ones in the UK, Canada, Australia, Japan, Norway, and Germany — and dominated as the best-selling album of 1970, 1971, and 1972. Concerning America’s Billboard 200, it hung on for nearly 100 weeks; curiously, it stayed CBS Records’ top seller for over a decade, too, only to be overthrown by Michael Jackson’s seminal Thriller in 1982. Eventually, it was awarded 8 x Platinum by the RIAA and has since sold over 30 million copies. By and large, it was received positively by the press, too, although some publications (such as Melody Maker) expressed criticism as well. It won two Grammy Awards in 1971 (for Album of the Year and Best Engineered Record), with the title track also winning for Record of the Year, Song of the Year, Instrumental Arrangement of the Year, and Contemporary Song of the Year. Of course, countless major magazines have since extolled its merits, with Rolling Stone and The Times rightfully including it on their modern lists of the best albums of all time.

Speaking of Bridge Over Troubled Water’s subsequent treatment, it’s been reissued countless times over the years and across the globe. Sadly, the only way to hear one of its most famous rejected tunes, “Cuba Si, Nixon No” (a Chuck Berry-esque rocker), is through miscellaneous bootlegs. In a 2016 article for Rolling Stone, Andy Greene called it a “lighthearted take on Cuba’s political situation” before referring to an interview with Simon from 1972, in which he states, “Art didn’t want to do it … We even cut the track for it. Artie wouldn’t sing on it. And Artie wanted to do a Bach chorale thing, which I didn’t want to do.” That “Bach chorale thing” turned out to be “Feuilles-O”, a short but sweet and harmonious ode sung in French and with minimal accompaniment from acoustic guitar. Thankfully, it’s available on few newer versions of the sequence.

Unsurprisingly, the official collection is still wonderfully catchy, ornate, amusing, and poignant, showcasing just about every side of Simon & Garfunkel’s magic. It’s not definitively their best work — Bookends is a personal favorite — but nearly every track is timelessly emblematic and lingering for one reason or another.

Unquestionably, it houses some of the pair’s most joyous and lively compositions. Its third selection, “Cecilla”, offers a hooky, bouncy, and slightly sophomoric account of romantic misbehavior that virtually all listeners can empathize with. (Reportedly, Simon also penned it about his deeper issues with the limelight and songwriting.) Its natural percussion and assorted backing vocals also point to the World music influence he’d later explore. Likewise, their take on Felice and Boudleaux Bryant’s “Bye Bye Love” is simple and tasteful, evoking The Everly Brothers’ more well-known interpretation and while calling back to their days as Tom & Jerry. Elsewhere, “Keep the Customer Satisfied” is a purposeful regression into Big Band and rockabilly that’s quite fun and light, whereas “Baby Driver” focuses its airy rock and roll atmosphere on a youth who desires sexual adventure after being raised in a conservative home. There’s even a faint Reggae edge to the carefree folk of “Why Don’t You Write me?”

As strong as those are, it’s Bridge’s ballads and more serious staples that reign supreme and cement Simon’s legacy as a master of relatable and evocative songwriting. With its gospel proclivities and focus on orchestral embellishments, sobering piano chords, and Garfunkel’s angelic lone voice, the opening title track is like their version of “Let It Be” in that it’s a hopeful yet bittersweet recognition of the enchantment they shared with fans. (Outside of that, it was inspired by Simon’s then-wife, Peggy, and the racial tensions that plagued America at the time.) It’s an absolutely gorgeous and gratifying statement whose agelessness and universality has been celebrated through covers by Fiona Apple, Johnny Cash, Aretha Franklin, and Willie Nelson, among others.

Later, “So Long, Frank Lloyd Wright” is an archetypal Simon nod to a real-life historical heavyweight that’s soothingly sleek and luscious. In contrast, “El Cóndor Pasa (If I Could)” puts a tranquil and prettily nuanced spin on Peruvian composer Daniel Alomía Robles’ 1913 classical rendition. Another standout comes from the contemplative beauty of “The Only Living Boy in New York”, whose feisty outcries of “Half of the time, we’re gone/ But we don’t know where/ And we don’t know when” are an arresting juxtaposition to its otherwise serene essence. As for closer “Song for the Asking,” it’s like the inverse of “Bridge Over Troubled Water” since Simon sings it alone alongside the delicate complements of strings and acoustic guitar strums.

Almost inarguably, though, the superlative achievement of them all is “The Boxer”. Blending top-notch storytelling (mostly reflecting loneliness, monetary hardship, and Simon feeling fraudulently victimized) with vigorously multilayered instrumentation, its fetching fingerpicking, introspective words, unhappy melodies, and heavenly harmonies are enriched by staggering percussive rumbles and other classical touches. Like many of its predecessors, it’s more than just one of the duo’s utmost feats; it’s one of the greatest songs of our time.

Fifty years later, Bridge Over Troubled Water is every bit as impactful, endearing, prophetic, and daring. It signifies everything that made Simon & Garfunkel such a special and significant act while also ranking as one of the most long-lasting and culturally resonant musical statements of its period. From its softest and emptiest segments to its most full-bodied and daring moments, Bridge Over Troubled Water still overflows with one-of-a-kind brilliance.

Essential Tracks: “Bridge over Troubled Water”, “The Boxer”, and “The Only Living Boy in New York”

Pick up a copy of Bridge over Troubled Water here... 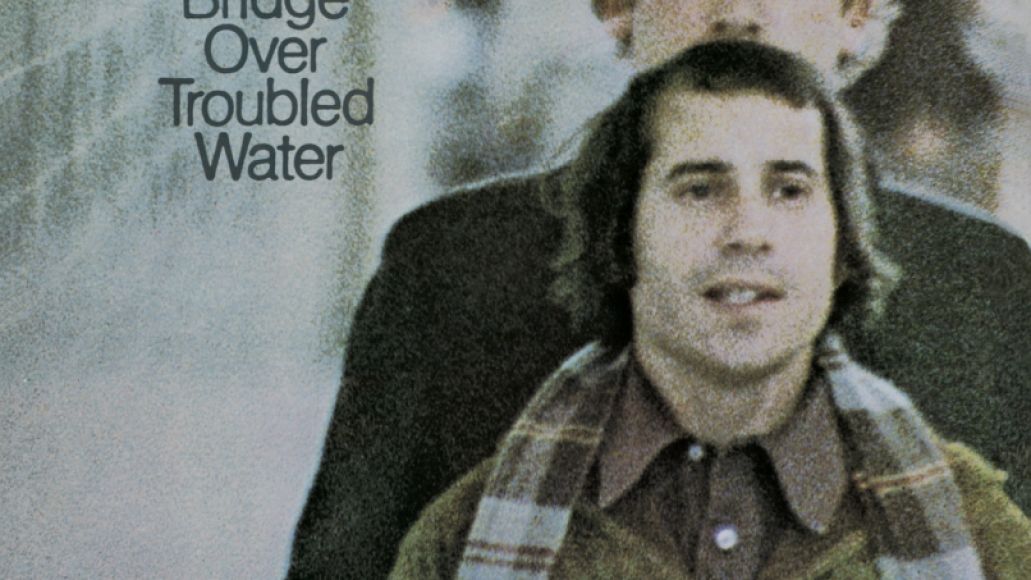