Last December, he collaborated with friend and architect Joseph Vescio and famed art collector Fabrizio Moretti (yes, there’s another Fabrizio Moretti) for a Sotheby’s exhibit/auction aptly titled Fabrizio Moretti x Fabrizio Moretti | In Passing. On the eighth day of that same month, he quietly and without fanfare released an album with artists collective machinegum. And in March, he’ll be taking his post behind the drum kit to embark on a massive international tour with The Strokes. Today, Saturday, February 1st, he’s standing in a Lower East Side gallery, dancing about (and around) architecture, explaining the ethos and logistics behind his most recent project and exhibit.

“The idea of if a tree falls in the woods, is there a sound,” Moretti asks. “There’s none because it’s only creating ripples in the air and the thing that interprets it as a sound is the brain. And that’s what machinegum is. It’s the brain, this gummy machine. I thought, How rad would it be if, in this process of ritual, you focus in on this absurdity that, to make this art work, you need not just the musician, but the audience.”

Moretti and Vescio came up with the idea for the machinegum exhibit while taking brain breaks from another project. The plan? Scatter Manhattan and Brooklyn with pink gumball machines. When someone put a quarter in one of the machines, they’d either get a gumball or a pink quarter with a QR code stamped on the back. If you get a pink quarter, congrats! You now have a ticket to an interactive exhibit and performance at a private gallery. 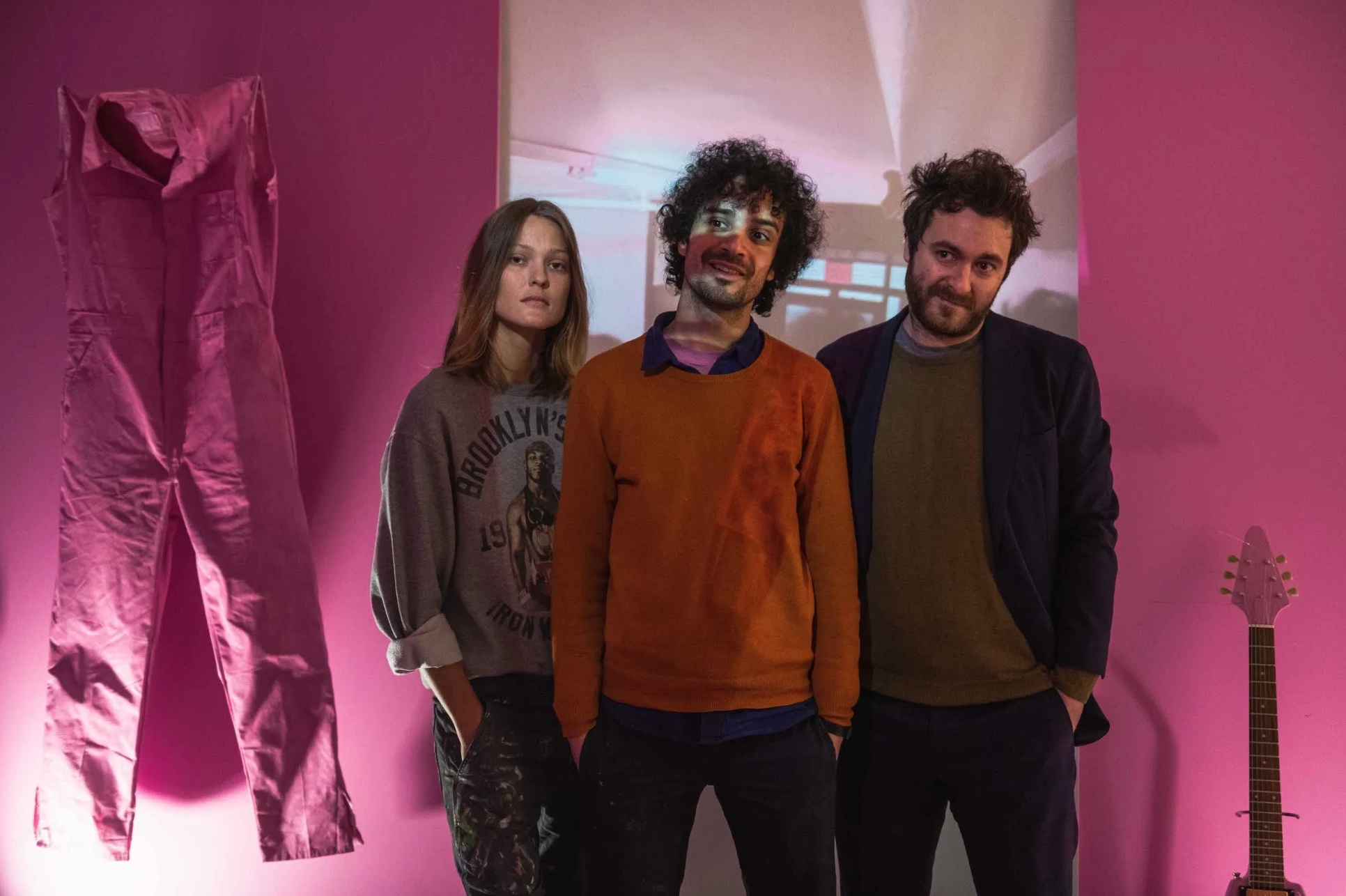 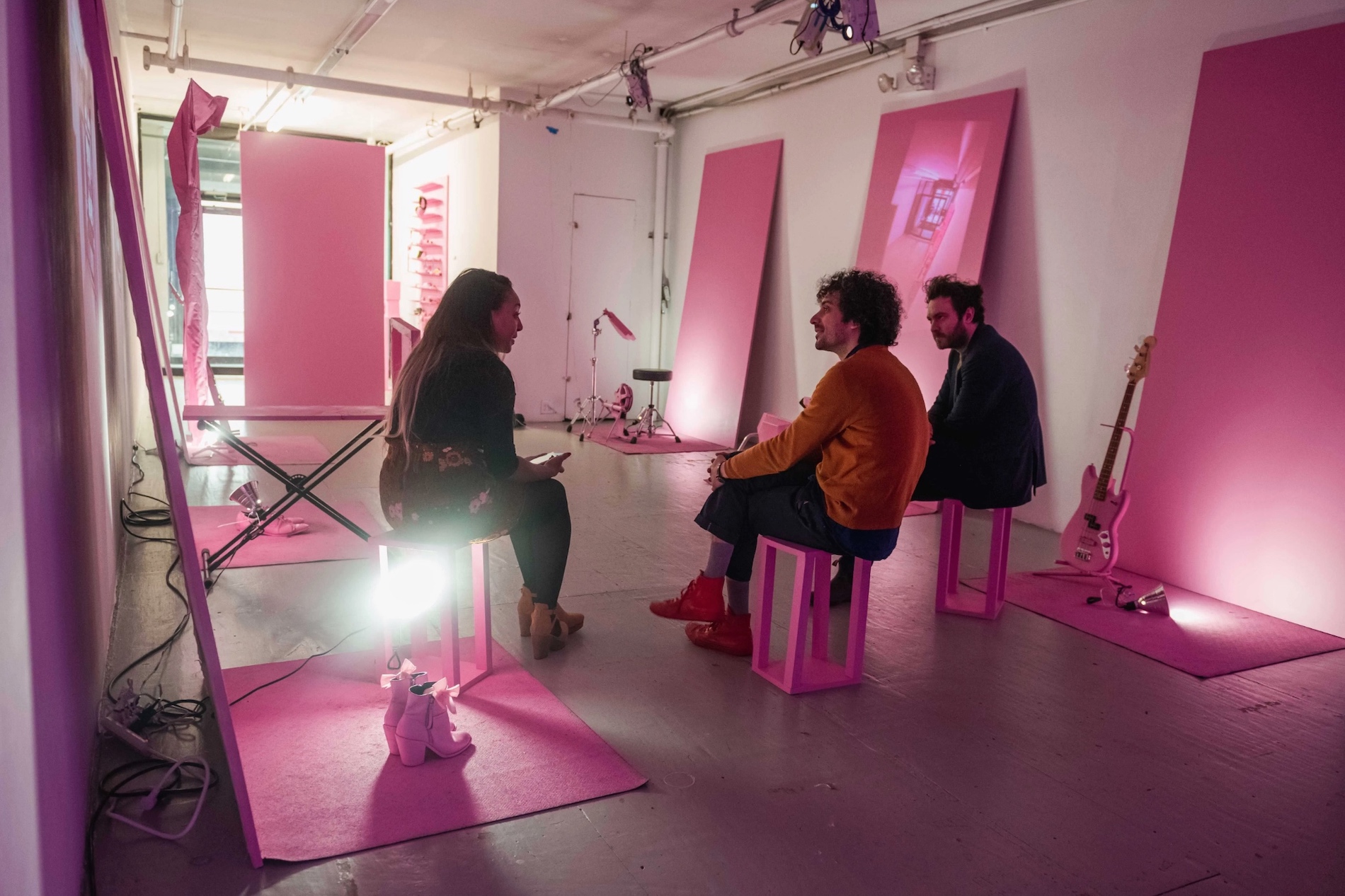 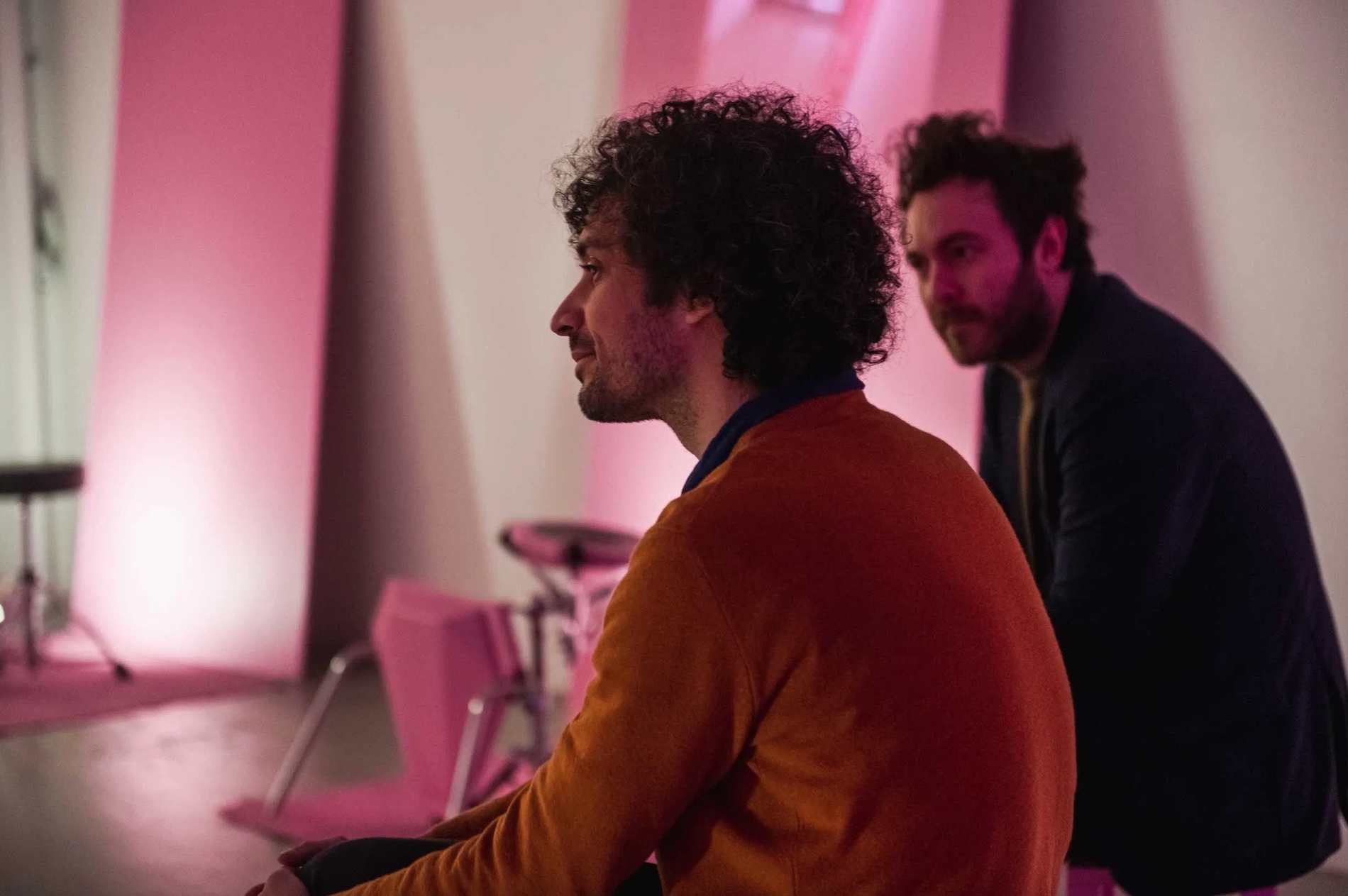 And so it goes, on the night of Tuesday, January 28th, the art gallery of Fig. 19 became the forest; a live performance of machinegum’s debut, Conduit, by Moretti, Ian Devaney, Delicate Steve, Chris Egan, Martin Bonventre, and Erin Victoria Axtell became the sound; and the lucky coin holders patiently lining up and down Chrystie Street were there to hear one of their three sets (starting at precisely 8:21 p.m.).

Upon entering, our cellphones were placed in un-lockable pouches, our bodies were covered in transparent pink ponchos, and our ears were concealed in Bluetooth headphones as we wedged our way in-between stations of bright-pink instruments. Not long after, the players took their positions, and a room full of people, mostly quiet (other than the white noise of their ponchos rustling against each other), focused intently on the moment. Most were smiling along to the ethereal synths and lyrical revelations streaming in their heads.

As we exited the gallery, we stopped at a wall of cassette tapes hovering over a trough of pink paint. We were invited to use the paint on anything we might be carrying in our pockets and would be willing to trade for a cassette and its spot on the wall.

Returning to the scene days later, the communal wall piece has since transformed into a display of random pink-colored items, a visible representation of responsible reciprocity.

“The whole idea is based on this tinge of saccharin commercialism,” Moretti explains. “The whole music process and selling something to you, this kind of dance we do as musicians and as listeners. I thought it would be interesting to have a wall where we actually break it down, where we actually have an image of trade, and this is the way I came up with it.”

During Tuesday night’s festivities, I dipped half a citrine crystal in the frozen, raspberry-hued paint before taking my cassette from the display (which, according to Fab, shows my intention and delicateness, thank you very much). A friend of his, who he described as cheeky, left a tampon (she was super proud of it). Another friend, who took a more literal interpretation of the exchange, artistically and carefully dipped in half of a dollar bill, leaving a clean line right under George Washington’s face, an homage to the cover art for Conduit.

“Now you have a wall that represents reciprocity,” Moretti continues. “You’re not asking someone to give you money; you’re asking them to trade something they already have. It’s so that I can show other people that I had an experience with you specifically, and together we made something beautiful. We can’t follow the dollar. Also, the dollar doesn’t represent to me what you did to get that dollar. See, for example, I have no idea how hard you worked. I’m sure you work super hard. I’m sure you’re amazing at your job, but that dollar will never show that to me. This crystal shows me your talent.” 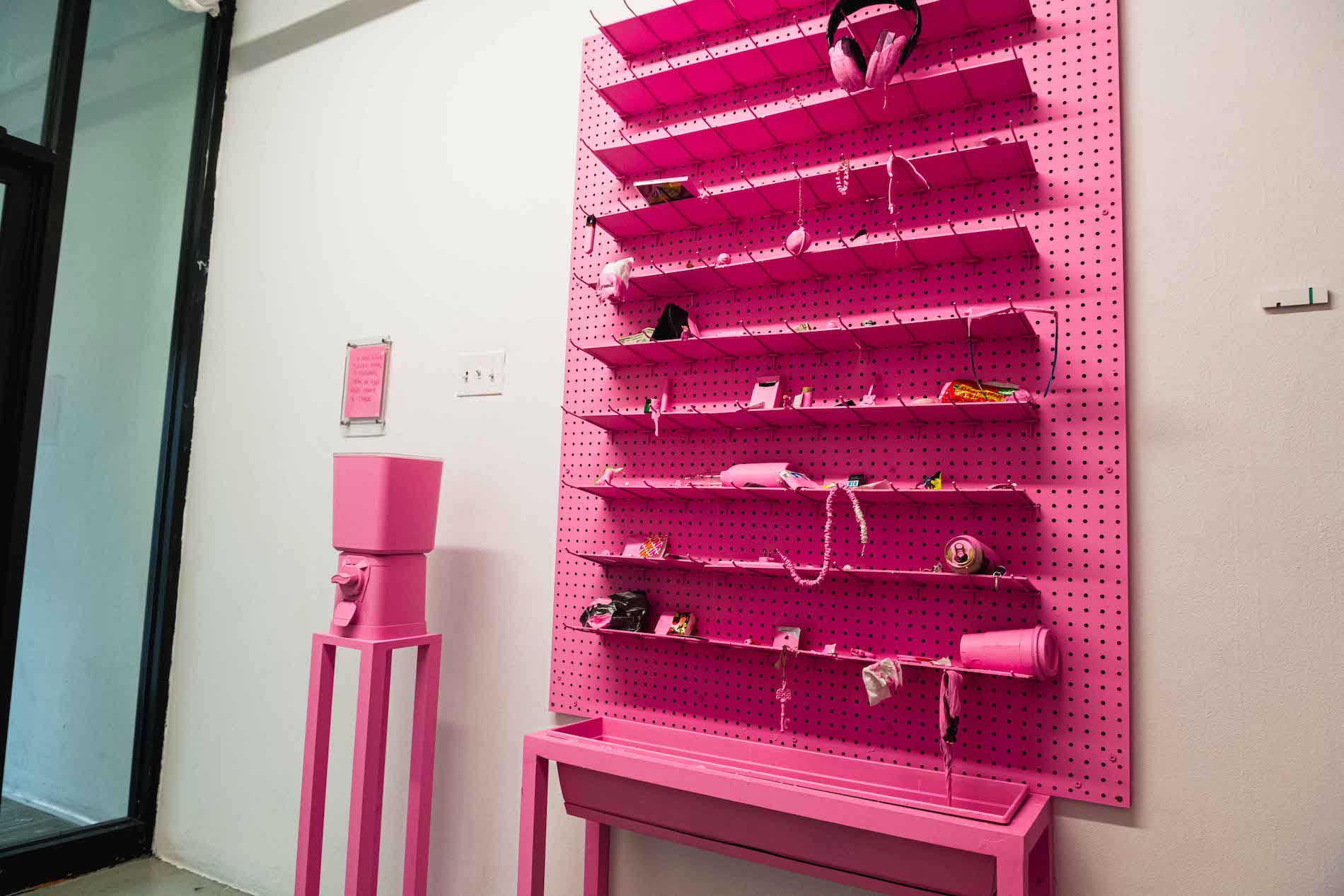 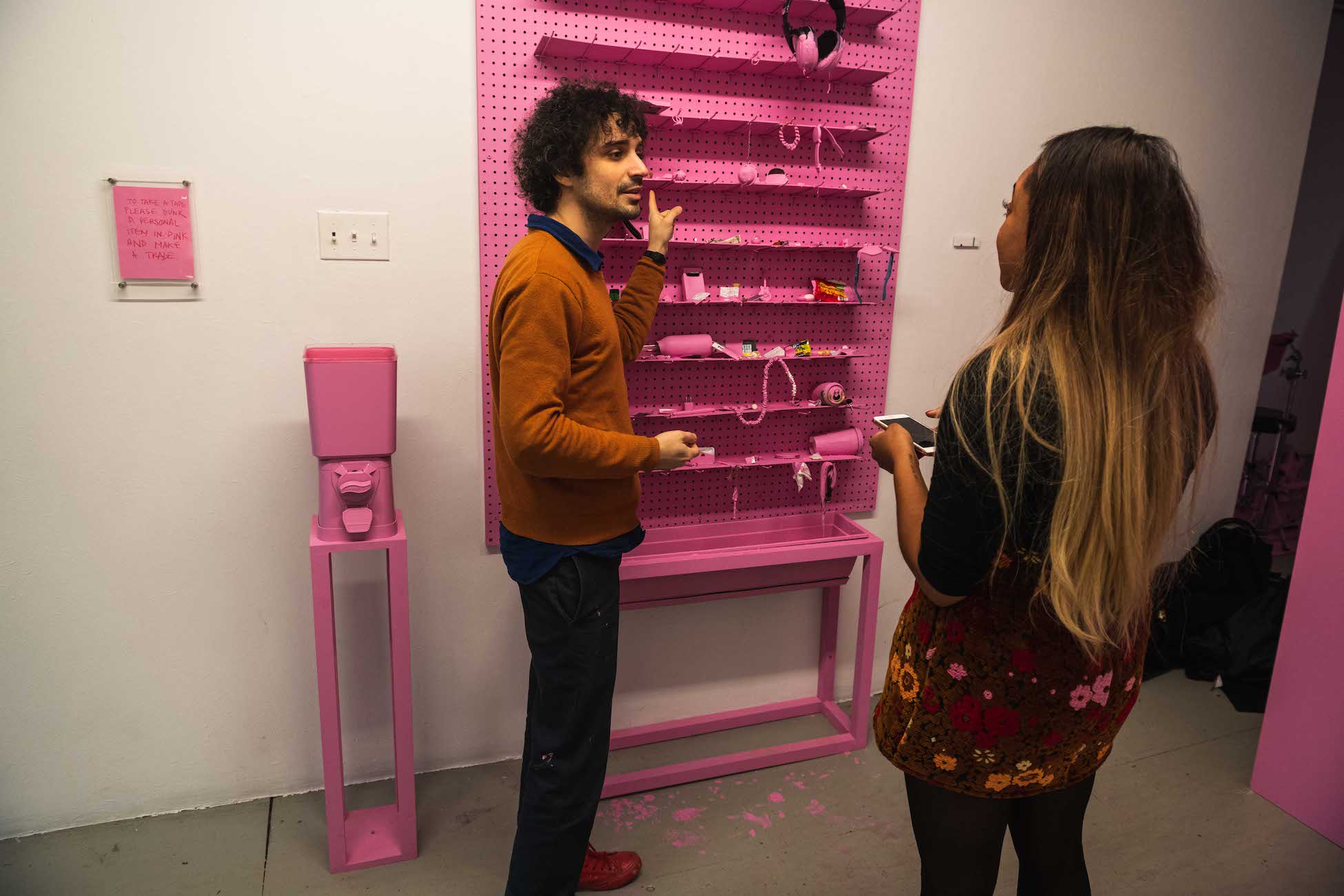 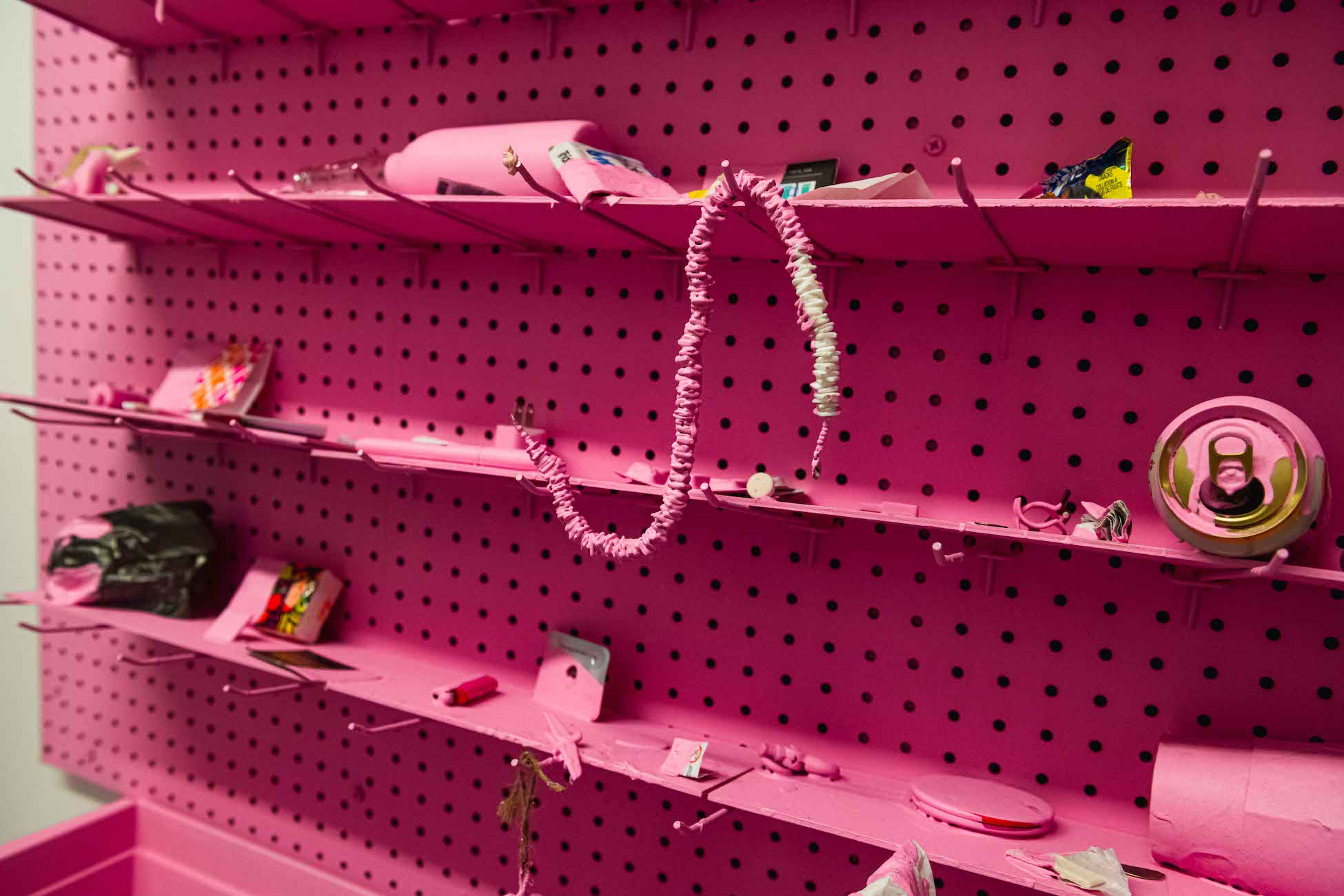 The goal of the collective is to draw inspiration from the involvement of the viewer (and/or interpreter) in the hope of promoting inclusion and propagating further art in its name. Everything that night, from the communal wall to the cameras projecting visions of the audience on the walls, integrated an element of response or interaction from the individuals witnessing it.

“I had this idea,” Moretti ruminates. “It would never ever work because it’s impossible, but how rad would it be if I made a piece of gum that when you chewed it, you could hear me? I mean, it comes from this idea of ritual, the idea that there is only one form of artwork that you ingest, and that’s music. Everything else has a distance in my opinion. You go and you see a piece of art; you’re looking at it outside of you. When you listen to a song, the singer’s voice is being put together in your own head. The effort that you as the listener has is part of the artwork in a sense.”

Speaking of listener effort, the original plan for sharing Conduit was to only grant access to ears who found their way to the show or got their hands on a coin. The significance of how and when they released the album, however, came down to numbers — and not the number of streams typically counted during a record release cycle. “The number 128 is very important to me,” Moretti adds, “and if you notice the show was on 1/28 as well, and the time we started actually playing the first note was 8:21, and if I didn’t release it then [on December 8th], I felt like it would fall apart. I know that sounds weird. So, we just released it. We asked if we could release it without any hullabaloo or anything like that. We really wanted it to be this kind of treasure at the end of a treasure hunt.”

They even attempted to create their own online music player in hopes of keeping the album siloed off before its official release. And given that context, there’s something about the melancholic sentiments and sounds in Conduit that appears perfect for the soundtrack of a scavenger hunt ending in a silent soirée. The paced crooning in “Knots” and the echoed beckoning in “128” seem to be made with that night in mind, only that wasn’t by design.

“It was not an intentional thing, but it was a conditional form of music because it all came from me being alone in my room,” Moretti admits. “Every sound we started to plant came from me not disturbing the people that were next door in New York City. I think that quiet lends itself to that kind of in-your-own-head introspection.”

Inner rumination also lent itself to machinegum’s live performance, our headphones giving us the ability to meditate to the same music while also having completely individualized experiences.

“There was this particular fellow who was standing right here, and I swear to God, he was either the most stoic dude or the most serious man I’ve ever seen. And he was just standing there, like judging me,” Moretti laughs. “And then I was like, okay, that’s cool man. You do you, friend. Then there was a song that came on that I guess was the song he was waiting for, and as soon as it starts with this kind of…” He stops to hum the decidedly disco-funk opening of “City Walls”. “As soon as it came on, he stomped his foot really loud, and he stopped looking at me and looked dead at the drummer and started dancing. He became a piece of the artwork right there.” 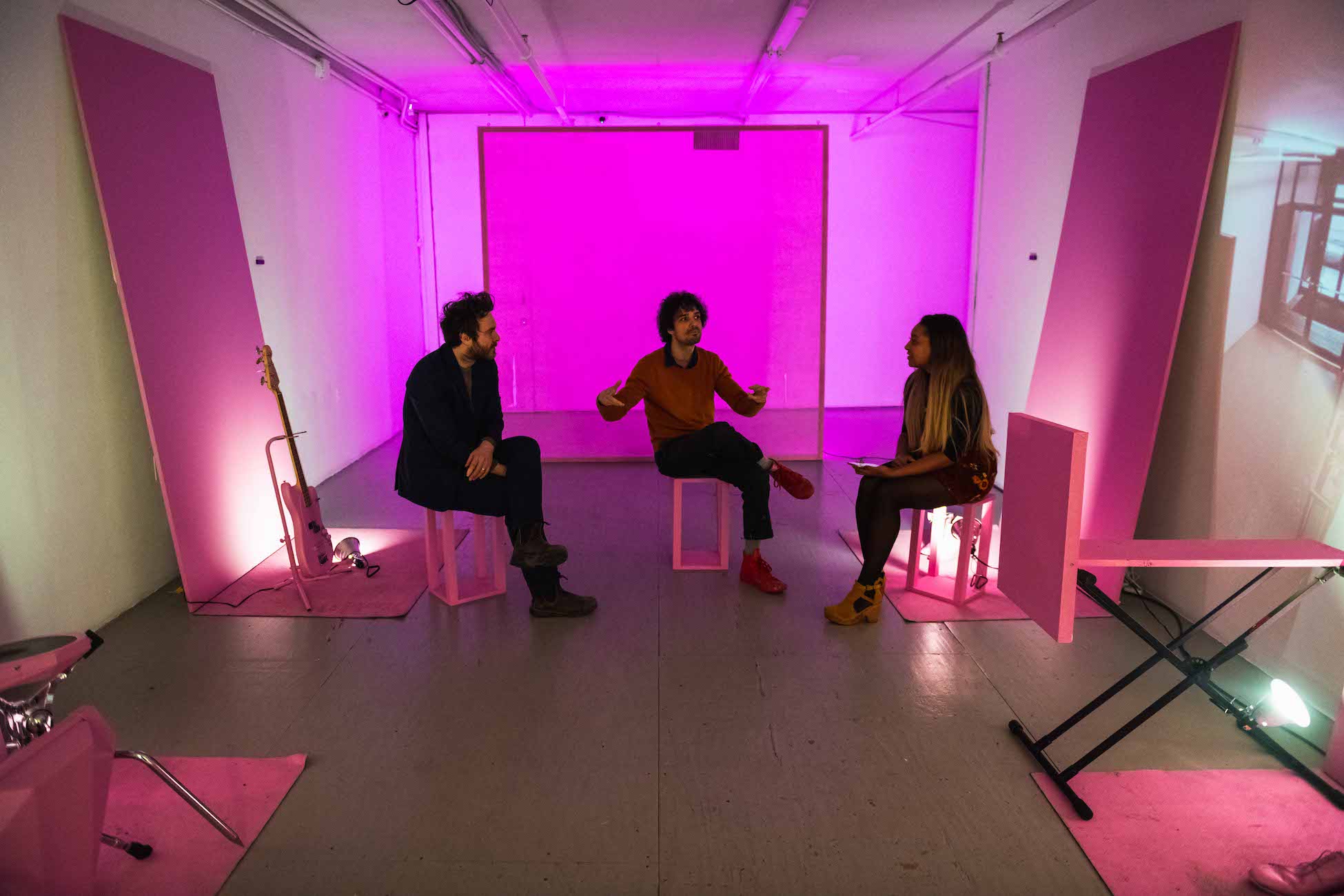 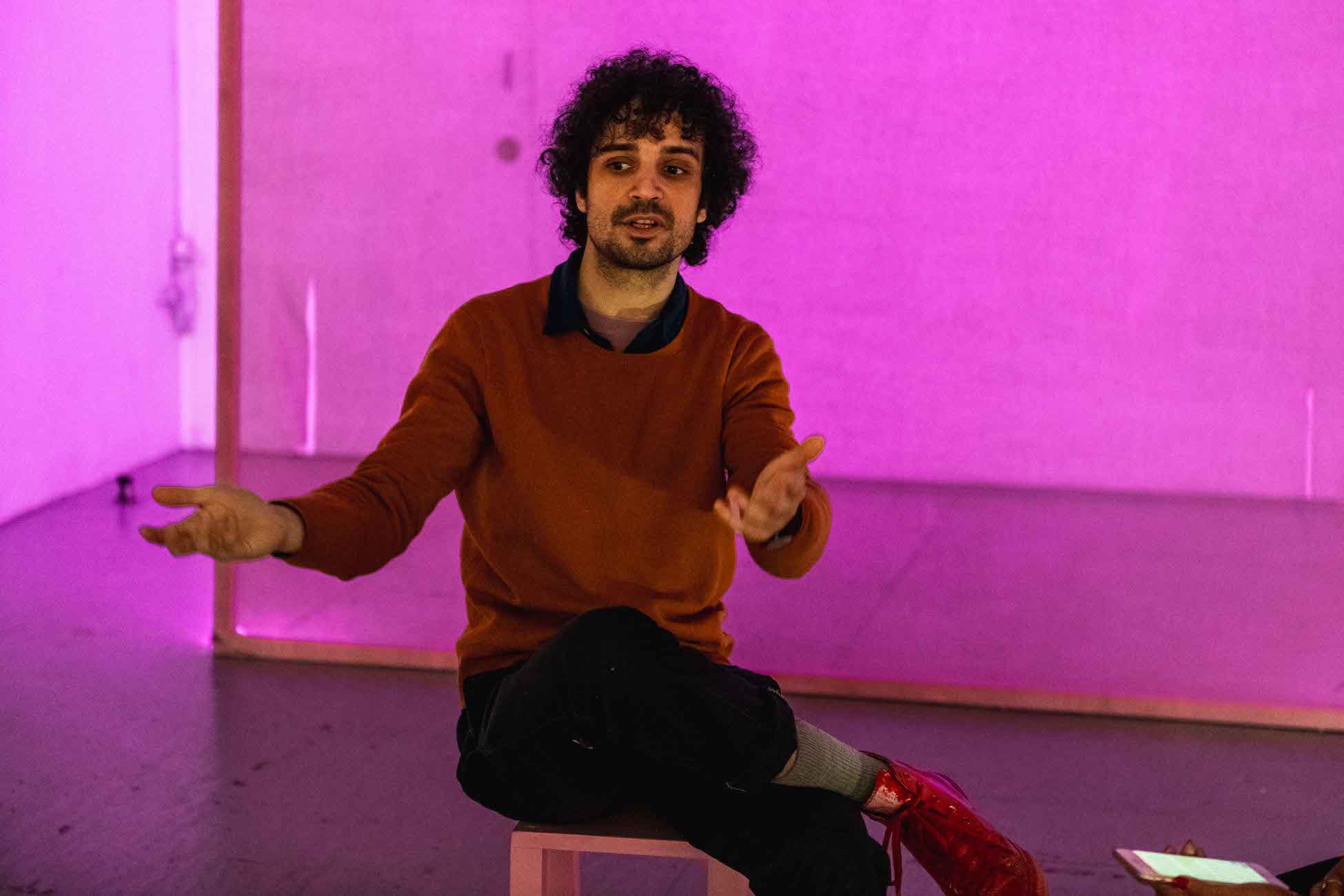 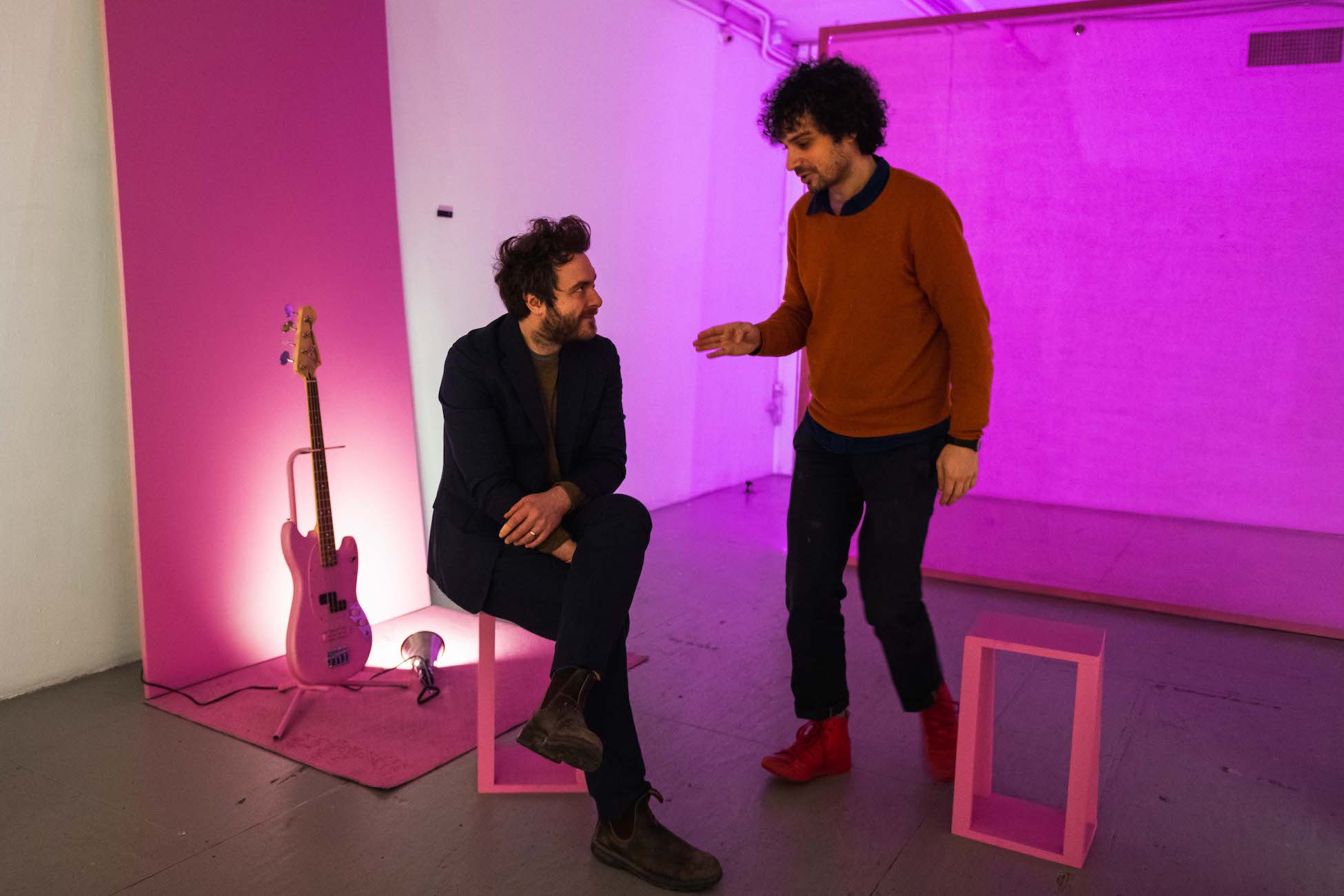 The collective is doing multiple things at once. They’re about to sign to Frenchkiss Records and are planning an official release of the album this Spring. The Strokes are also set to release an album, their first new music since 2016’s Future Present Past EP — not to mention Devaney’s band, Nation of Language, has similar plans for 2020. I wonder aloud about how they balance it all and immediately admit I’m looking for advice in the area.

“I’m not trying to say that I have any knowledge, but when I speak to somebody who is creative, like you who’s artistic but is also a craftsperson because there’s a difference between being an artist and actually fucking putting in the work,” Moretti shares. “When you start crafting, you see that the work influences the rest of the work because of the sheer fact that you need to do well. I’m always working on two songs at the same time because if I don’t, I obsess on the details of one, and it fucks up.”

By the end of the interview, directed by Moretti and joined by Vescio and Victoria Axtell, we took turns capturing photos between the instruments and projecting ourselves on the walls, evolving from passive witness to active ingredient of the show — becoming multiple things at once.

“The whole crux of this is to try to sew a flag under which people can continue to make art,” Moretti says. “It’s not so much that art is difficult to make; it’s that the structures and the kind of prejudices that the art world constructs make it seem like creating art is this insurmountable task. It’s almost like if we all fly this flag together, do anything, and come to me and I’ll put it up on the website. The community of art — my music is a paintbrush, but Joe’s architecture is a paintbrush, your article is a paintbrush — to all of this.” 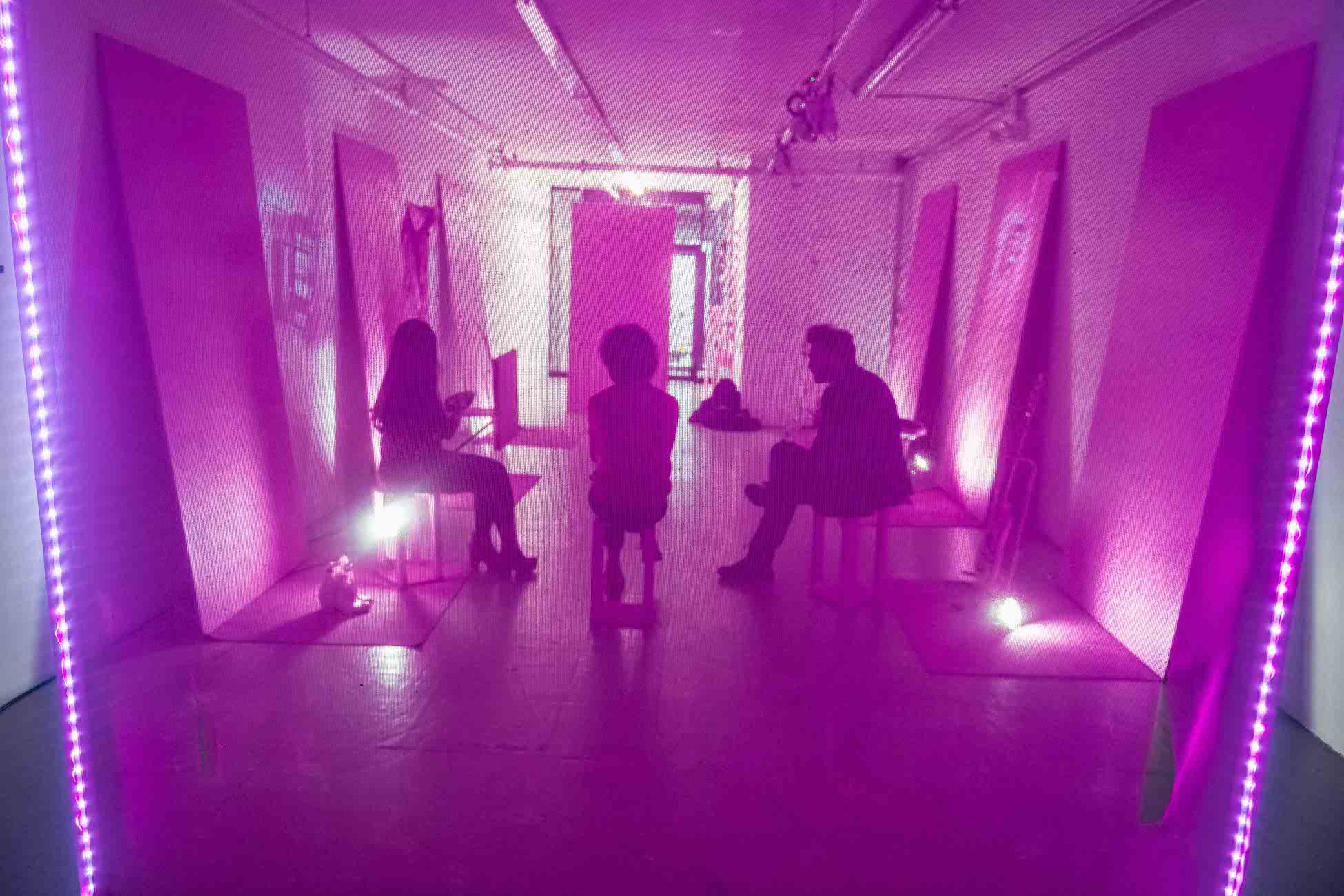 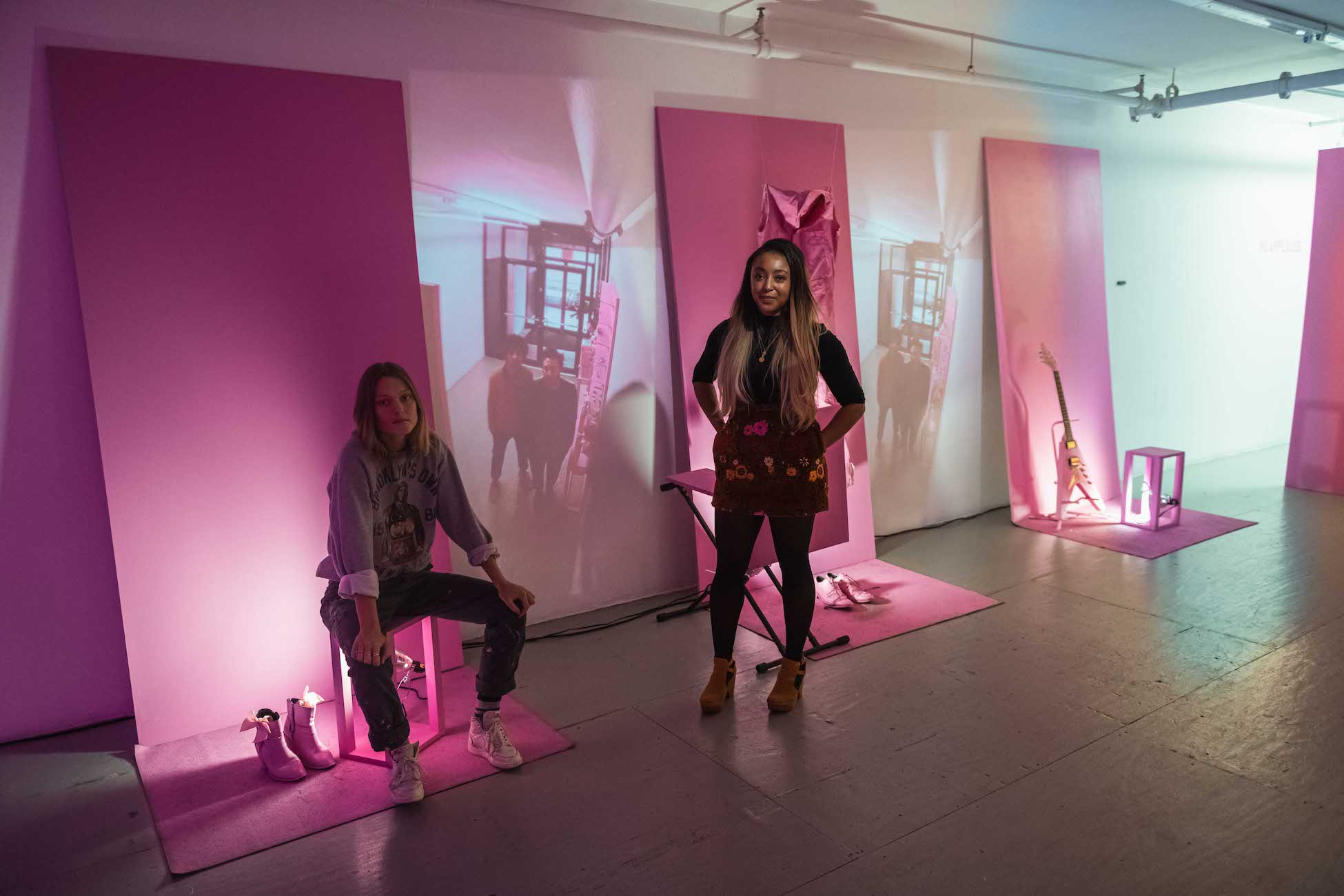 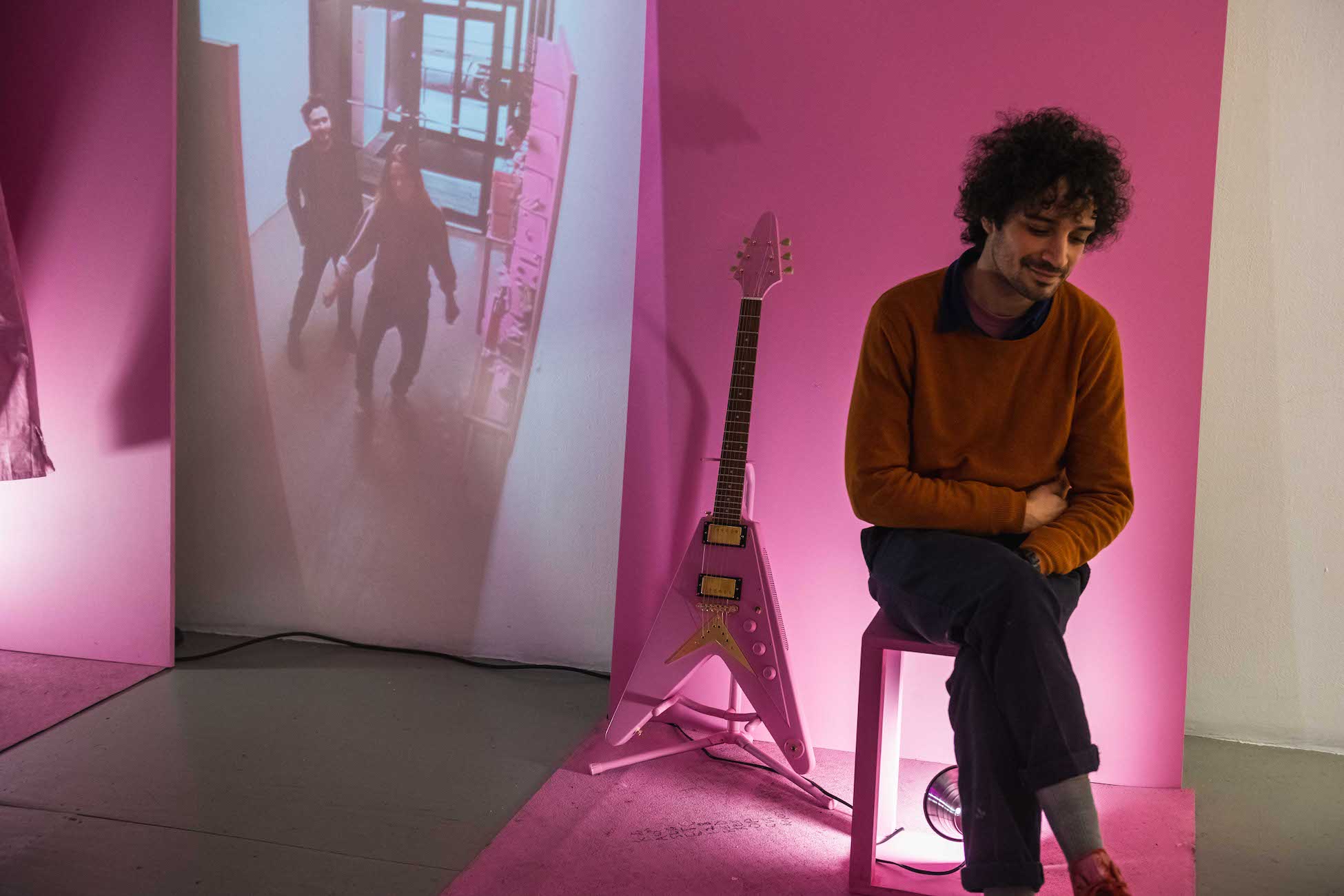 Want to join the collective? Here’s a note from machinegum on how:

The conceptual artist Sol LeWitt said that “art is a vehicle for the transmission of ideas through form, the reproduction of the form only reinforces the concept. It is the idea that is being reproduced. Anyone who understands the work of art owns it. We all own the Mona Lisa.”

We will post a list of instructions on machinegum’s website for participants to follow and record on their phone cameras to possibly be included in the video for “Kubes”. This list will include everyday actions like waking up, brushing teeth, maybe a little dancing, maybe a little laughing, etc. Hopefully, by reproducing these universal commonalities, we can reinforce machinegum’s central concept of community and inclusivity.

In short, we’d love to make something with you.

So please go to kubes.machinegummusic.com

Get Conduit on vinyl April 24th via Frenchkiss Records