The Pitch: It’s the middle of the night, and a woman wakes. She wakes in such a way that it makes two things very clear: One, she was never asleep at all, just pretending. And two, her safety and perhaps her life depend on that pretense. So begins The Invisible Man, writer-director Leigh Whannell’s pointed new contemporary adaptation of the H.G. Wells novel of the same name. The film’s protagonist is not Griffin (here Adrian Griffin, played by Oliver Jackson-Cohen), one of the great monsters of literature. He sleeps beside the woman, wholly visible and menacing, even while asleep.

No, it’s the woman, Cecilia (Elisabeth Moss), who we follow as she makes her escape from a glittering oceanside mansion that’s also an austere, isolated prison. That should be the end of the story—impossibly, she escapes. When Adrian later dies of an apparent suicide, the finality increases. Yet the fear never diminishes, despite the reassurances of her sister (Harriet Dyer), a childhood friend (Aldis Hodge), and his daughter (Storm Reid) that she’s safe. And slowly, that seemingly irrational fear starts to seem much more rational.

Make Yourself Some Tea Afterward: Let’s go ahead and get this out of the way first: The Invisible Man is stressful. Whannell, well aware that even those unfamiliar with the Wells story, or any of its subsequent adaptations, will have some idea of what’s coming based on the title alone, uses that awareness to his advantage. Well before anything seemingly supernatural happens, he tends to train his camera on empty corners, blank walls, deserted corridors, frosted windows, and so on—and then linger just a little too long. It’s an incredibly effective, fiendish trick that spurs the already tense people in the seats to peer just a little bit harder, to scrutinize the frame, to ready themselves for the inevitable sign that something, or someone, is moving in all that space. The viewer’s level of alertness and awareness matches Cecilia’s with startling rapidity, and it never really lets up. If the camera pauses, the audience tenses, preparing for the worst. And it pauses a lot. 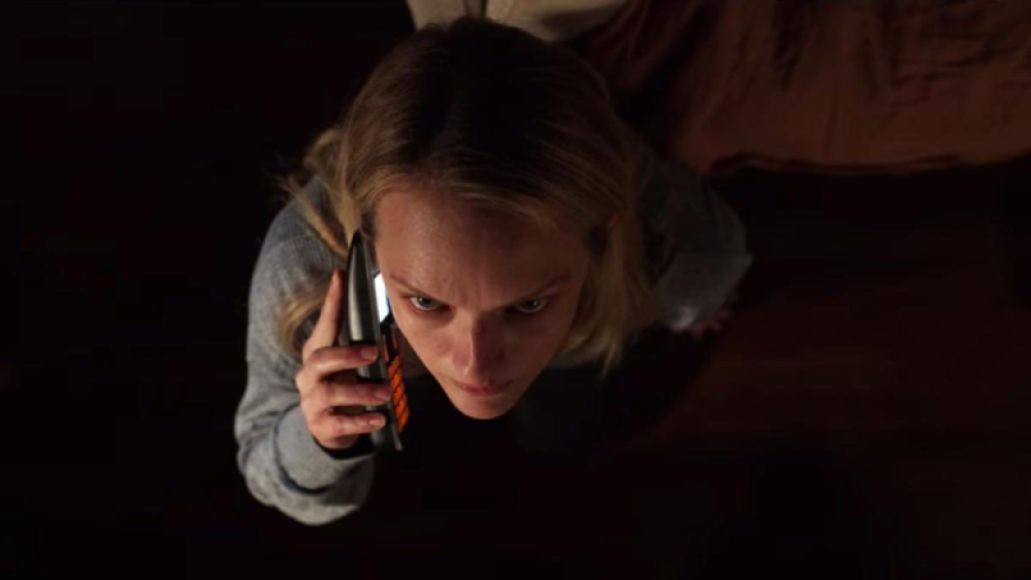 You’d think that might prepare one for that inevitable first sighting, but you’d be wrong. Cecilia, the sound department, and the film’s composer (Benjamin Wallfisch) know there’s someone lurking out of sight long before any physical sign emerges, making the advent of that moment all the more unsettling, one creaky floorboard, unnatural click, or ominous tone at a time. And then it happens, at last. This is the point in the film when you might be tempted to lean over to your neighbor and whisper, “That’s the invisible man,” had you any breath to spare. The impulse to leaven the mood won’t belong to you alone, should such a thing occur to you—in this critic’s screening, the moment was met with a combination of a low chuckle and an even lower groan, which rippled through the audience like, say, liquid off a suit that makes you invisible. It was a thrilling moment, collectively experienced, and added to, rather than diminished, the film’s power.

So maybe brew yourself a nice warm mug of peppermint tea afterward?

The Invisible Man Through the Eyes of a Survivor

Have You Considered Using a Meditation App? Of course, it’s not just Whannell and the production team who make the whole affair so tense. Elisabeth Moss is a gifted comedic performer—that she elicits a grim laugh or two in these 124 minutes is proof of that. Even so, she’s become something of an avatar for female terror, pain, and rage in recent years, and it’s almost as though all that time spent on The Handmaid’s Tale was her way of training for the marathon that is The Invisible Man. It’s an incredibly impressive performance, a perfect marriage of technical precision—even when Whannell’s camera comes to a stop, Moss somehow lets you know exactly where she thinks her assailant is lurking—and with staggering vulnerability. Perhaps “Elisabeth Moss is great in a movie” is a less-than-surprising statement, but it’s still true, so let’s put it another way: Elisabeth Moss gives a horror performance for the ages, anchoring the film in terror and frustration so potent it could blister paint. It’s a towering performance.

And after spending two hours watching her, you might consider spending some time with a meditation app or some other tool designed to help you reduce your anxiety? 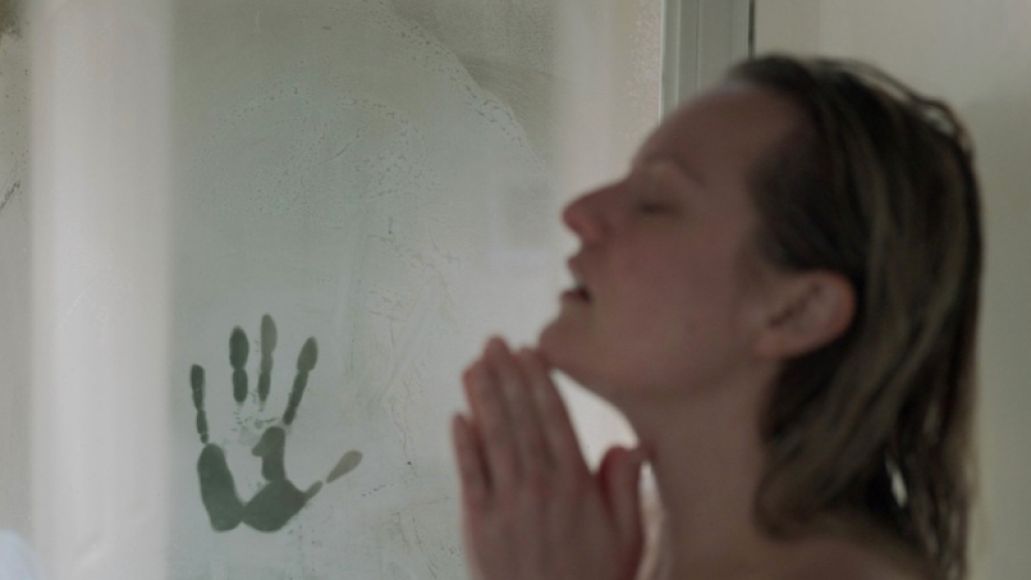 Yes, The Themes Will Also Spike Your Blood Pressure: Of course, there’s another reason that watching The Invisible Man is likely to have you reaching for a glass of wine/warm bath/Xanax/dog/cat/whatever eases your mind in times of stress. This is, unabashedly, a horror film about intimate partner violence. The titular Invisible Man was a monster long before he ever became invisible, and while the floating knives and creaking floorboards can be (and often are) terrifying, it’s Whannell’s frank, almost blunt, approach to Cecilia’s reality that’s most affecting.

Cecilia describes a life of terror—emotional abuse, physical abuse, stalking, gaslighting, controlling behavior, and (it’s implied) rape—and then, despite Adrian’s apparent death, we see it all happen again. She inherits money from Adrian, but it requires her to hand over her banking information and sit down for an in-person meeting with his brother, who’s tasked with reading an abusive letter. And then while that job interview is in progress, she finds that’s been sabotaged, too, thus granting him financial control over her life … even in “death.”

The Invisible Man is a profoundly lonely film, from the moment Cecilia has to leave the dog behind to the slow stripping away of every single safe haven she has, and because no one can see it happening (and, granted, because it’s seemingly impossible), there’s no one who believes her. Whannell doesn’t engage with these issues in a particularly nuanced way—though to be fair, there’s so much nuance in Moss’ performance that it feels plenty subtle all the same—but there’s still plenty of subtlety.

When Cecilia’s sister Emily shows up to pick her up as she flees from home, it’s apparent that Emily has absolutely no idea what’s happening. When Cecilia sits down for a job interview, the (male) interviewer asks her about a job in France by asking if it’s just that all beautiful women go to Paris. And when someone dismisses or doubts her, they tell her to see a psychiatrist or get a grip. There’s never a flicker of either outrage or surprise on Moss’s face. It’s what she anticipates, because Adrian Griffin, and men like him, have always been invisible. They do this in plain sight.

(You can read more about intimate partner violence, which the Center for Disease Control calls “a serious, preventable public health problem that affects millions of Americans,” here.) 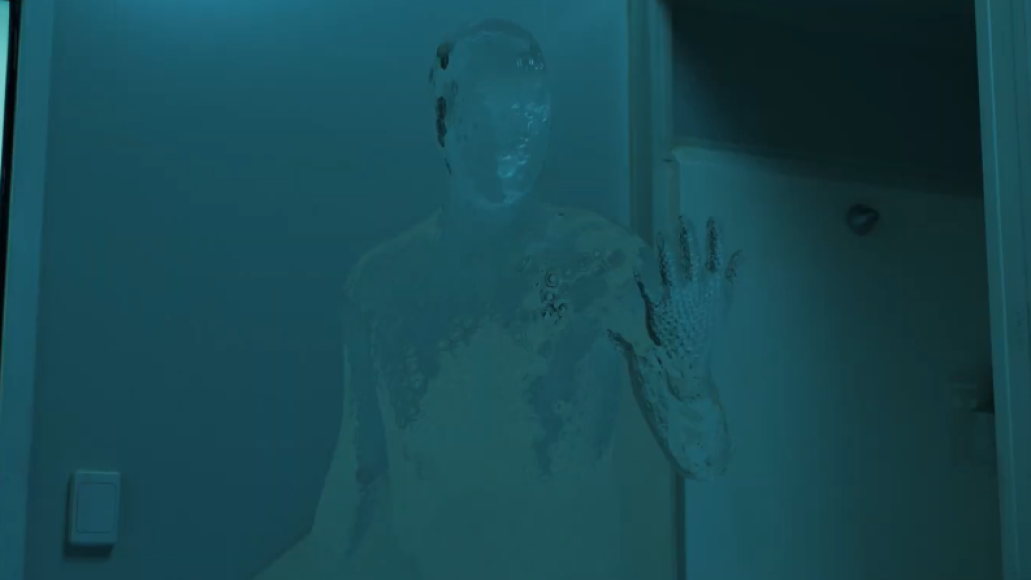 The Verdict: While not particularly subtle or probing, The Invisible Man manages to do what many of our greatest horror movies have done before it: address a real-life, everyday nightmare in a heightened, bracing, and even cathartic way. Maybe the odd twist or turn is predictable, and perhaps it drags on a few minutes too long, but with a performance this bracing, a turn this emphatic, and staging and camerawork all but guaranteed to have you checking your backseat and peering under your bed, such flaws are worth overlooking. It’s a scary movie. That’s only what the subject deserves.

Where’s It Playing? Attempt to see the Invisible on Friday, February 27th.