Our music feature Track by Track aims to give fans a deeper look at a band’s latest effort one song at a time. Today, Gang of Four share the final recordings of the late Andy Gill on This Heaven Gives Me Migraine, which his widow, Catherine Mayer, and vocalist John Sterry have broken down.

At the top of the month, the post-punk community was struck a tragic blow when Gang of Four co-founder and guitarist Andy Gill passed away from a respiratory illness. While the loss of the band’s “Supreme Leader” is still settling into reality, a bit of comfort arrives today in the form of the group’s new EP, This Heaven Gives Me Migraine, which features Gill’s final recordings.

A press release notes that up until days before his death, Gill was hard at work on the new music. Revisiting and reimagining some classic tracks from Gang of Four’s catalog (“Natural’s Not In It”, “The Dying Rays”, “Toreador”), he was seeking to capture the live magic the band displayed on their last tour. While he never got to finish the work, his widow, Catherine Mayer, noted that he was giving “final notes on mixes” right up until the end.

“Since his death, I have been working with the band to fulfill his vision,” Mayer continued. “The only change we have made is to include on the EP two brief recordings of Andy speaking, both, in different ways, essence of Andy.”

This Heaven Gives Me Migraine is out today. As a special tribute to Gill and his legacy, Gang of Four singer John Sterry has joined Mayer in giving us an exclusive Track by Track breakdown of the effort. Listen to the full thing below, followed by their remarks on each track.

“Anthrax (Andy speaks)”:
Andy’s musings on bands who sing about love, recorded from his spoken word vocal on Anthrax.

“It’s nice to hear what he’s talking about in this song, after all these years. It’s a distillation of one of the main themes in his lyrics: holding ideas up to the light to see them more clearly, never telling you what you should think, but just going, ‘Hey, this is kind of strange right?’ In this recording maybe he’s being scathing, maybe not… but I do know that he could be as sentimental as anyone at times.” — John Sterry

“The Dying Rays (2020)”:
This track reimagines a song originally included on the legendary post punk outfit’s eighth studio album, What Happens Next, released in 2015. The new track features vocals by John “Gaoler” Sterry in place of original vocalist, Herbert Grönemeyer. Poignant and powerful, “The Dying Rays (2020)” is a meditation on mortality, composed and produced by Andy Gill.

“‘The Dying Rays (2020)’ is just a beautiful song and completely confounds what people think of when they think Gang Of Four, which in itself is quite a Gang of Four thing I guess; the lyrics seem all the more pertinent now.” — JS

“There have been so many tributes to Andy as a creator and as a breaker — of rules, new ground, guitars. ‘The Dying Rays (2020)’, a track Andy first recorded with our old friend Herbert Grönemeyer and reworked by Gang of Four singer John Sterry, shows the fuller picture, of a man who also thought and felt deeply and whose loss is not just to music but to all of us who loved him.” — Catherine Mayer 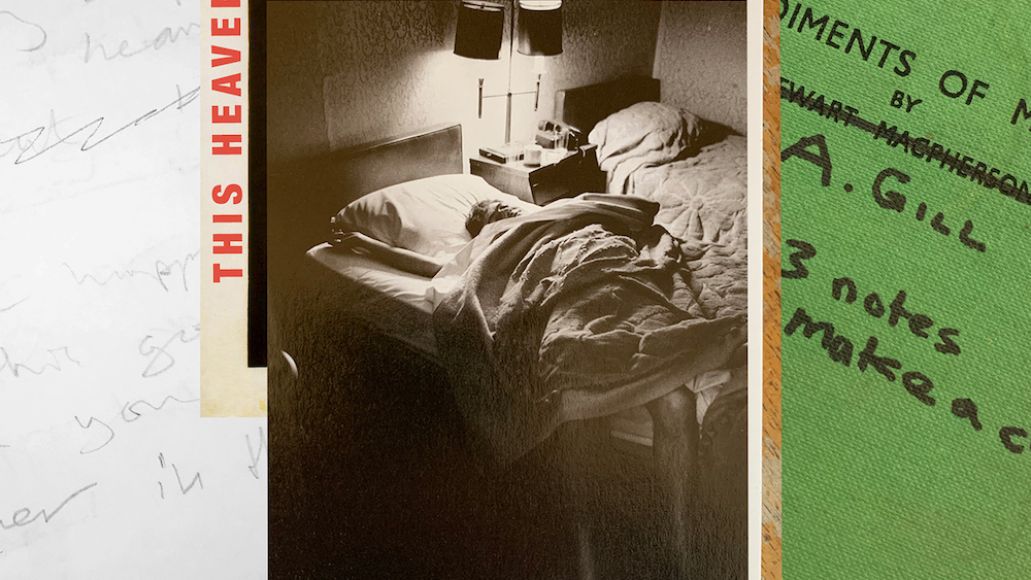 “Natural’s Not in It”:
Originally featured on Gang of Four’s seminal 1979 album Entertainment! and one of few older tracks included in the live setup of the current Gang of Four line up, this was recorded in late 2019 to capture the energy of those live performances. This was one of Andy’s favourite songs, a take on the world that rather than losing relevance became more pointed than ever in an age of turbocharged consumerism and regressive politics. As he remarked in a Sunday Times interview, published after his death, “Sexism is endemic through all layers of society and the workplace, but it has always been so screamingly obvious in the music industry. From the beginning, though, as a band we were writing songs that explored feminist ideas, like ‘Natural’s Not in It’, which questioned ideas of what constructs we consider natural in society.”

“Toreador”:
Andy was fascinated and horrified by the myth of the Minotaur, as he said, a story that is “ancient but of the moment… Half man, half beast. He’s rational and understands his predicament while locked into the behaviours that destroy all chance of happiness or intimacy. Vainglorious, insecure. Simultaneously aggressively proud, attention-seeking and conceited. He’s brave but frightened. He is alone but desperate for the human touch. Masculine fragility and alienation.” First recorded for Gang of Four’s 2019 album, Happy Now, the track continued to evolve in performance and in Andy’s concept for it.

“Toreador was in the live set from the moment it was written and has evolved a lot from the album version, it has an energy that only comes from knowing a song like the back of your hand.” — JS

“Purple in Nature (Andy speaks)”:
A clip from a video of Andy, made by Catherine during one of their regular walks in Regent’s Park.

“Andy was an artist, a man of strong opinions and with a highly developed aesthetic sense. His aversion to purple emerged early in our relationship, at a family gathering with my sisters, when he recoiled to see us dressed, by coincidence, in matching purple sweaters. His aversion to purple did not, of course, spare him from exposure to the colour. Over the years we teased him and played tricks on him, conspiring on one occasion to surround him at an event by guests dressed entirely in purple. In this recording, he looks at spring blossom in Regent’s Park, where we strolled most weekends, and muses on purple in nature.” — CM

Laufey Breaks Down Debut Album Everything I Know About Love Track by Track: Exclusive