By the time you read this, your life has been meaningfully affected by the global outbreak of coronavirus (COVID-19). Maybe the concert you were looking forward to this week got canceled. Maybe you’re terrified to travel to your friend’s now-imperiled wedding. Maybe you’re trying not to go full The Shining while working from home in self-imposed quarantine with your spouse and a doomsday supply of toilet paper. Maybe your relative or loved one has already become ill.

Or maybe you’re a working musician whose primary source of income—touring—has been abruptly cut off for the next, well, who knows how many months. While it’s far too soon to know the full impact, the ongoing pandemic—and the resulting shutdown of the daily rhythms of public life—has already crippled the entertainment industry for the indefinite future. It’s bleak. Festivals are postponed. Arena tours are canceled. Broadway’s gone dark. The NBA is on hold. Movie theaters are now half-empty caverns of disinfectant wipes. Italy is on lockdown. Colleges are sending their students home. The financial impact on arts and culture scenes nationwide is likely to be severe.

The reason is simple: The coronavirus, like the flu, spreads very easily, traveling through the air in the form of tiny respiratory droplets produced by a sick person. It is significantly more contagious than SARS. Crowds and public gatherings provide the easiest settings for mass transmission, and, of course, crowds and public gatherings are the engines of any arts and culture scene. In cities around the country, performances and gatherings have ground to an unprecedented halt.

As of this writing, the virus outbreak has spread to 48 U.S. states and has been formally declared a pandemic by the World Health Organization, with approximately 150,000 known cases worldwide. More than 2,000 Americans have tested positive for the virus, including a beloved Hollywood icon; experts say that many more likely have it but haven’t been tested. (It can take five days or more for symptoms to appear.) Most people who contract coronavirus experience routine flu-like symptoms and recover fairly easily, but more vulnerable individuals (particularly the elderly and anyone with a major underlying health condition) risk serious symptoms or even death.

William Schaffner, an infectious diseases specialist who serves as Professor of Preventive Medicine in the Department of Health Policy at Vanderbilt, says he’s astonished at how quickly the country’s cultural institutions have responded to the pandemic.

“The social distancing recommendation has been remarkably accepted across the country,” Schaffner says. “It’s been absolutely stunning. And I hope and wish that it will have some impact in reducing the spread of this virus in our communities. Because that’s the whole purpose of these activities. But they do have social and economic costs. And some people are gonna get hurt. And that’s not a good thing. So we’re going to want to get back to normal as quickly as possible.” 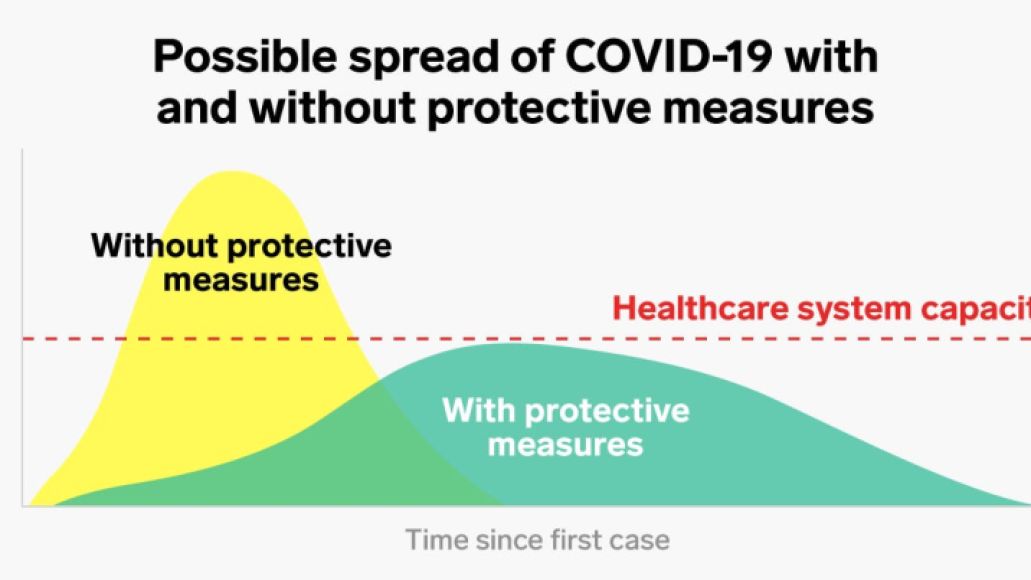 “The other side of the coin is that we have not organized ourselves as a public health system and as a clinical system to provide the extent of testing that we should be doing,” Schaffner adds. “And we’re slowly gearing up with all kinds of moans and groans to do that.”

Here’s an overview of the various sectors of the entertainment industry that have been most affected by coronavirus and what’s been shut down. 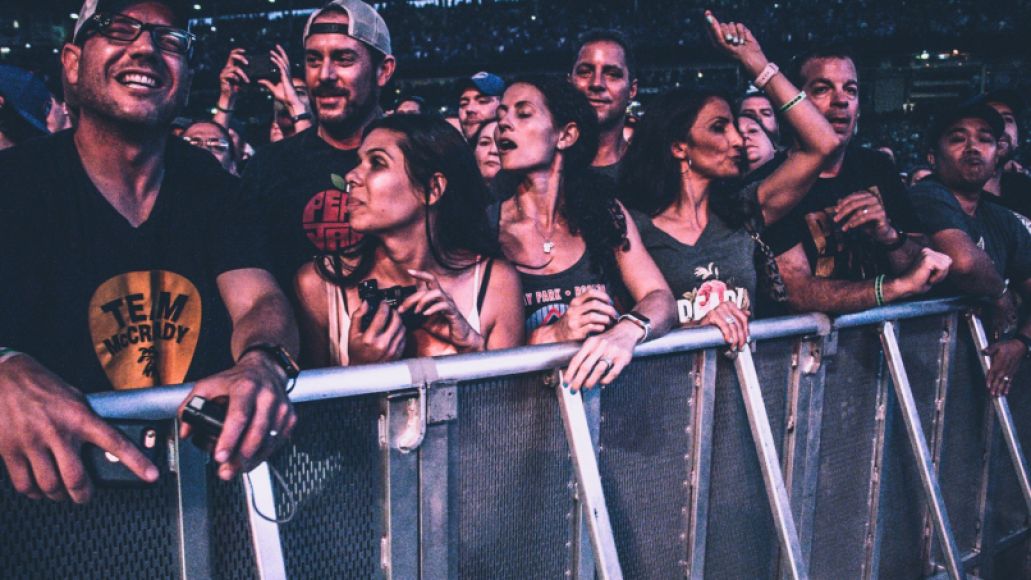 In the realm of arena tours, Pearl Jam was the first domino to fall. On Monday evening, the veteran band announced that it was postponing the North American leg of its long-awaited Gigaton tour. Seventeen shows, slated to begin March 18th, were postponed indefinitely. The news wasn’t entirely a shock: Health officials had already been urging people to avoid large crowds and nonessential travel, and Pearl Jam is from Seattle, one of the early hotspots for COVID-19 spread in the U.S. “As residents of the city of Seattle, we’ve been hit hard and have witnessed firsthand how quickly these disastrous situations can escalate,” the band wrote in a series of tweets. “Our kids’ schools have closed along with universities and businesses. It’s been brutal.” Still, Pearl Jam’s decision to call off a massive tour promoting its first new album in seven years—jeopardizing millions of dollars of revenue—signaled the severity of the situation to the rest of the music industry and guaranteed that more major cancellations were imminent.

It’s also worth noting that Pearl Jam has a legendarily dedicated fanbase, and many fans’ travel arrangements have been thrown into chaos. Manish C. Bhatia, a Chicago lawyer, tells Consequence of Sound that he was scheduled to attend eight shows on the North American tour with his brother. “We’ve both been fans since the initial days,” says Bhatia, who has attended 99 Pearl Jam or Eddie Vedder concerts since 1995. “We were gonna fly to Denver and then do the whole tour from Denver—Phoenix, San Diego, two in L.A., two in Oakland.”

Over the years, Bhatia has befriended many fellow fans from the road. On Monday, when the announcement was made, his phone started blowing up with texts. Despite his anguish, he knows the band made the right decision. “I posted a couple places that my heart is crushed but my head understands,” he says. “And then obviously you’re scrambling. We had all these flights and hotel reservations. You have to scramble and try to get any refunds you can.” 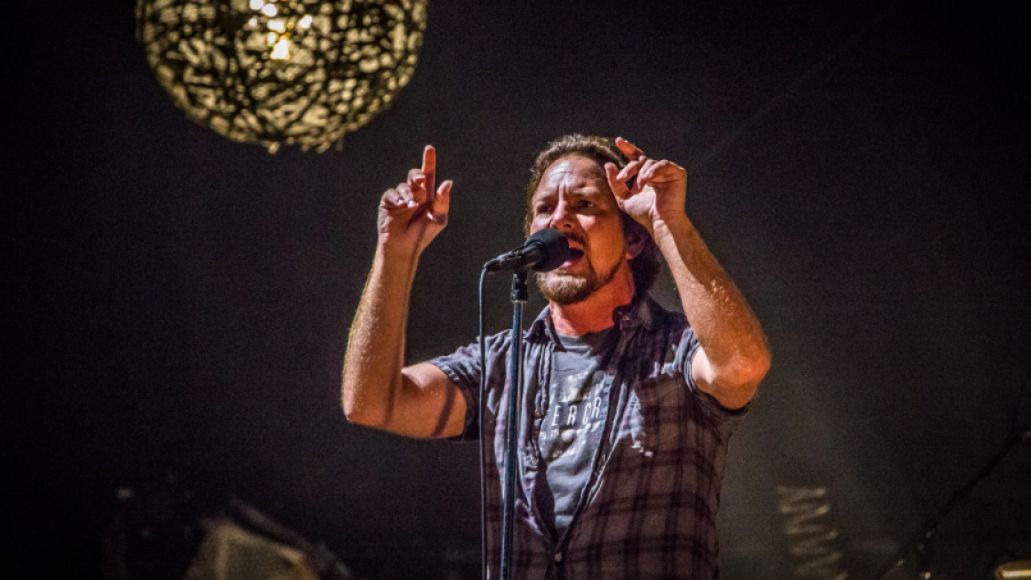 Andrew Staniforth, a diehard fan from Australia, says he already traveled to the U.S. for a business trip and extended his stay to catch the first show of the tour. “A first show of a new tour is something I have always wanted to see. It was such a coincidence that it became possible,” Staniforth says. “Australia had a shocking summer with bushfires and other weather events. Having a chance to see Pearl Jam after my work trip seemed like an answer to prayer to have some proper downtime and take in a band I have been a fan of since 1994.”

On Monday, he learned about the postponement. “Disbelief and disappointment and frustration and sadness was probably the flow of my emotions,” he says. Worse, he won’t be able to attend the rescheduled gigs, and he says the whole situation has financially impacted him by about AUD$2,000.

Within days of the Pearl Jam news, dozens of other bands and tours followed suit. On Tuesday, Zac Brown Band and Carlos Santana postponed major scheduled tours. On Thursday, the newly reunited Rage Against the Machine did the same. The list goes on; tours from My Chemical Romance, Third Eye Blind, Thom Yorke, Green Day, Sturgill Simpson, Madonna, They Might Be Giants, Pixies, and Bikini Kill have all been canceled or otherwise disrupted. On Thursday, Live Nation took the drastic step of halting all tours around the world until the end of the month. Many acts have issued statements expressing disappointment, promising to prioritize the safety of fans, and vowing eventual rescheduled dates. Promotional plans (tours are often scheduled months in advance to coincide with an album release cycle) have been thrown into chaos. 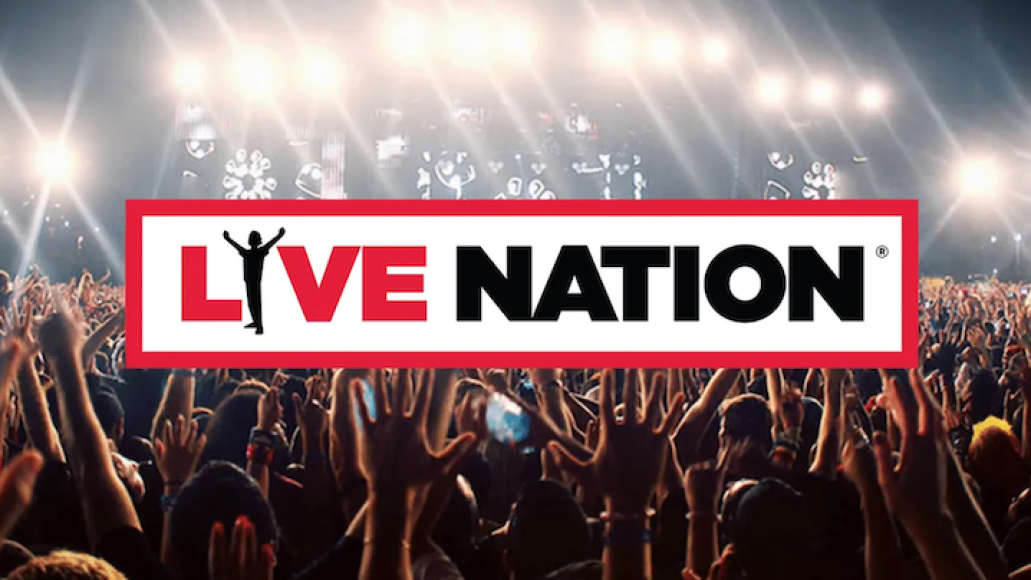 While Eddie Vedder probably won’t have trouble paying rent, the financial loss is severe for countless smaller bands and artists, many of whom have been left without expected income. As Deerhoof tweeted on Friday, “Thinking of a lot of people I know who eat and pay rent from touring. These are not people who can now live off of savings. They don’t have savings. In fact they typically have large amounts of debt, usually from student loans.”

Some acts have been near-stranded on the road, far from home. Mackenzie Scott, the musician widely known as TORRES, was in the middle of a European tour when Trump announced a European travel band. On Wednesday night, TORRES publicly asked fans for financial assistance getting home. “I’m going to lose every penny I made on tour booking emergency flights for my band,” she tweeted. “I’ve never experienced anything like this.”

Given that Europe is now the epicenter of the pandemic, European bands—like Poland’s psych-rock group Trupa Trupa—have also been heavily affected. “On March 10, Trupa Trupa was supposed to play a big show in Warsaw with Mura Masa,” says the band’s lead vocalist, Grzegorz Kwiatkowski in an email. “We packed our equipment and started to drive from Gdansk to the capital, and just 10 minutes later we had information from Live Nation that this show is canceled because of the government’s new coronavirus policy. So we stopped our van and returned home.”

Although the situation is frustrating, Kwiatkowski is hopeful. “We’ve got one song called ‘Only Good Weather’, and in some ways it means that even if it’s bad nowadays, we know it will be better,” he says. “If we are not playing gigs, we are using our time on composing and having more rehearsals.”

Fans can help their favorite artists by supporting them in every realm outside of touring—buying music, ordering merch, joining a musician’s Patreon. As many have noted on social media, there has never been a better time to buy merch:

Are you in a band? Did your tour / shows get canceled because of COVID? (or are you bummed you can't see your favorite band?) Put a link to your merch page in a reply tweet. Give the people a way to support you. We'll keep this pinned to our profile so you can find it easily.

merch sales, record sales, and other forms of remote online support are incredibly important for touring musicians facing cancellations right now. do what you can 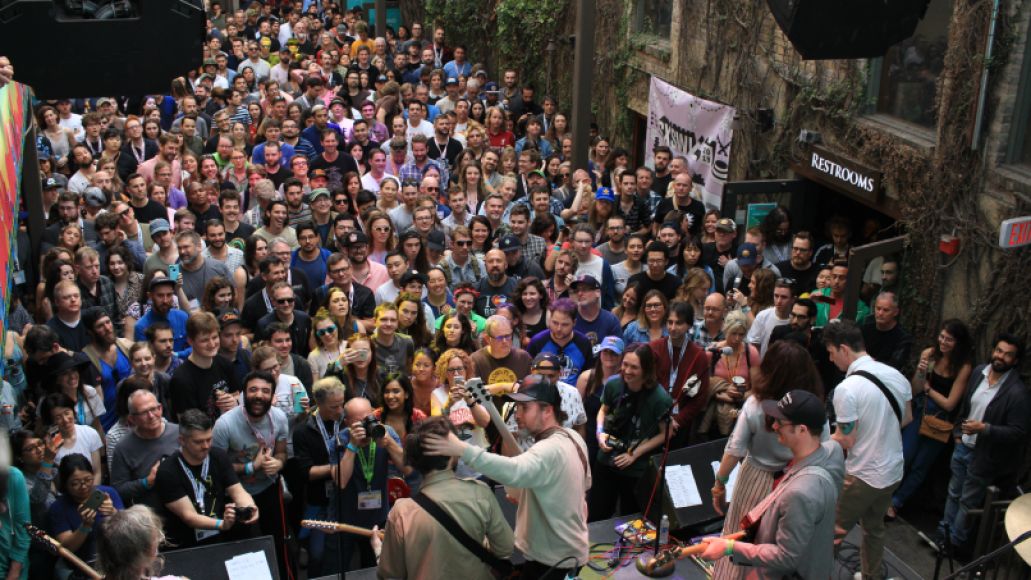 For 33 years, South by Southwest (SXSW) has brought thousands of musicians, fans, techies, and filmgoers to Austin every March. Nothing could disrupt the annual tradition, until coronavirus. On March 6th, shortly after Austin’s mayor declared a “state of disaster,” SXSW formally canceled the festival. It was perhaps the first massive virus-related blow to the music industry—and devastating to Austin’s local economy, which relies upon an influx of tourist cash every spring. Now it seems like Austin was patient zero for both the crippling of the event industry and the larger nationwide economic downturn; ominously, within days the festival had laid off one third of its staff.

Given that SXSW often functions as a promised land for up-and-coming bands seeking their first taste of buzz, many young artists plan their national tours around the festival. Many such tours have now been canceled, or have taken a huge financial blow.

“We just took a hit with a festival cancellation in Santa Cruz come April,” says the Austin-based folk singer Possessed by Paul James in an email. “Yes, I have seen numbers decline somewhat on shows. I think the biggest hit for a lot of Texas musicians was the SXSW cancellation. Right now I’m just keeping my hand sanitizer stocked and at the ready, less hugging, more elbow bumps, I’m using my own mic for vocals, etc.” 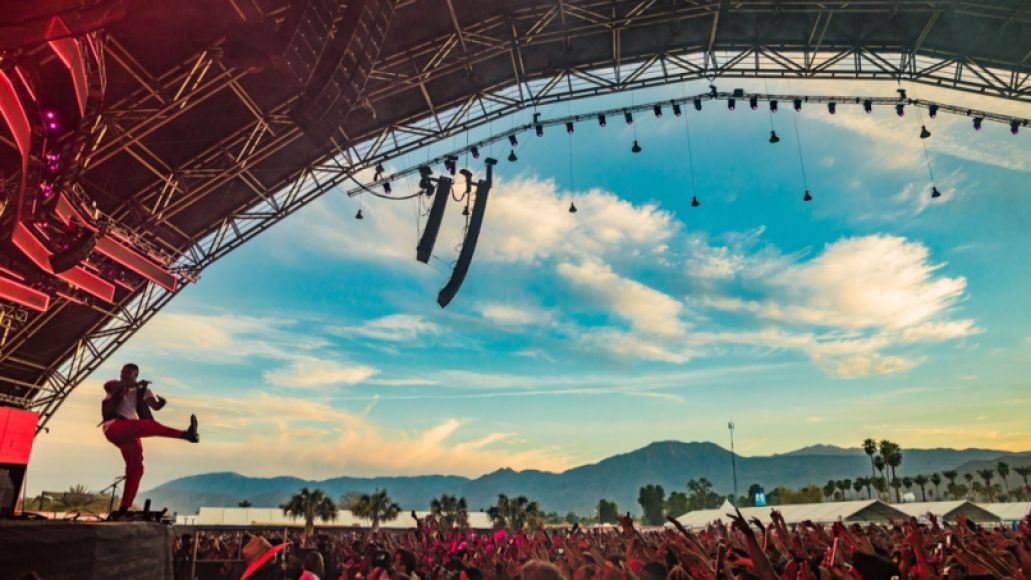 In most cases, the artists scheduled to play canceled festivals likely won’t get paid because of what’s called a “force majeure” clause, a common contract provision which basically removes both parties from contractual obligations in the event of significant unforeseen circumstances or “Act of God.” (If you’re curious about this subject—as many lawyers probably are—this thread is for you.)

As for the financial hit on the festivals themselves, it all comes down to insurance, as Pitchfork notes: “Lacking insurance, a festival’s organizers may incur expenses out-of-pocket for things like staffing and marketing, even if its payments to performers are covered under force majeure.” And SXSW’s insurance policy did not, alas, include viruses, pandemics, and communicable diseases. Although it’s hardly the most significant legacy of COVID-19, it will be interesting to see how this disaster impacts festival contracts for years to come.