“Are you gonna let me in?” Greta Gerwig’s Florence asks two different times in Noah Baumbach’s 2010 dramedy Greenberg while driving around Los Angeles trying to change lanes. The first time occurs in the film’s opening scene, when Florence is as sunny as the weather outside, and the other driver kindly lets her merge. The second time  goes down toward the end of the film , when she’s now dismal and frustrated, and the other driver blocks her path. The same can be said for her on/off relationship with Ben Stiller’s Roger Greenberg, the brother of her employer who’s house-sitting while the rest of the family is on vacation in Vietnam. Depending on the day, Roger either welcomes Florence into his life or shuts her out altogether. They’re two directionless people seemingly stuck on a road to some unknown destination.

Roger is a classic neurotic New Yorker by way of Los Angeles — forced to return to the oppressively sunny skies of his hometown after being institutionalized following a breakdown. Fifteen years ago, he selfishly torpedoed his band’s shot at a record deal and has spent the years since working as a carpenter and writing letters of complaint to various businesses. He doesn’t drive anymore either, which leaves him reliant on best friend/ex-bandmate Ivan (Rhys Ifans) and/or Florence to play chauffeur. Roger is stuck in every way a person can be stuck. “I’m really trying to do nothing for a while,” he tells ex-girlfriend Beth (Jennifer Jason Leigh) at a party. “Wow,” she replies, “that’s brave at our age.”

Florence, on the other hand, is 25 and spinning her wheels working as a personal assistant, occasionally singing in bars, and — in her words — going from “just having sex to just having sex to just having sex” with a series of men following a breakup. She wants more for herself, but she doesn’t know what that means or even looks like, so she fills her days with tasks to help other people live their lives. Still, she possesses an indefatigable optimism that even Roger can’t fully resist. “I’m impressed by you,” she tells him, “you seem really fine doing nothing. You don’t feel the pressure to be successful by other people’s standards.” For these two, the grass is greener (Greenberg, if you will) on the other side. Florence has it all just waiting for her while Roger is afraid he’s missed it. They’re meeting in the middle — only it’s the middle of nowhere. 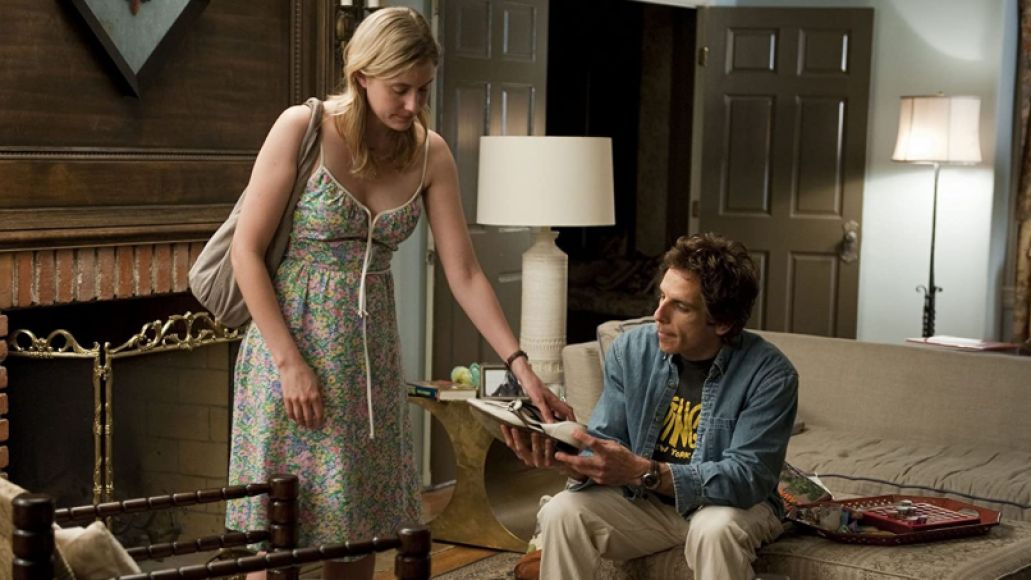 Like the majority of Baumbach’s films, Greenberg is preoccupied with the liminal spaces of adulthood — those pesky in-betweens full of growing pains, bitter disappointments, and ruminations on what could have been and what might still be. Whereas Frances Ha finds more of a screwball-esque joy in its titular character’s pursuit of adulthood (likely due in equal measure to Gerwig’s onscreen charisma and offscreen contributions to its screenplay), Greenberg is a decidedly more bittersweet (emphasis on the bitter part) examination of aging and middle age. There are more hard truths than soft moments and certainly no youthful heroines doing jetés down the street to David Bowie’s “Modern Love” in picturesque black and white photography.

What I’m saying is Greenberg is not exactly a feel-good movie — it’s more of a feel-everything-whether-you-like-it-or-not movie and your enjoyment of it largely depends upon your ability to tolerate its titular character’s moodiness. But that’s kind of the point. Roger is insufferable, yes, but beneath his fatalistic moods and pretentious ravings about consumerism or music, he’s a wounded, insecure man unable to let go of the past. Ben Stiller is in fine form here, mining Baumbach’s darkly funny script for all its worth and allowing Roger’s vulnerabilities to creep to the surface. It’s a perfect marriage of material, actor, and director even if the material is not the easiest for audiences to swallow.

What does make Greenberg infinitely more enjoyable is the presence of Greta Gerwig, who feels like a breath of fresh, sunny California air every time she’s onscreen. In her first collaboration with her now offscreen partner Baumbach, Gerwig brings some much needed levity and youthful charm to her scenes, which perfectly balances out Roger’s Debbie Downer energy. The camera loves her, and the late cinematographer Harris Savides shoots her as though she exhibits a kind of glow — and she does in her own way. Watching her pal around with dog Mahler or dance at a party of twentysomethings, it’s not difficult to understand why Roger falls for her — or why Baumbach did creatively and otherwise. Gerwig’s quirky vim and verve is irresistible.

The other adults in the movie — namely Ivan and Beth — exhibit a kind of world-weariness. There’s an acceptance of their present circumstances even if neither of them have fully made peace with the past either. Ifans, in particular, wears Ivan’s disappointments on his sleeve, trying to support Roger’s whims as he always has but ultimately is fed up with his friend’s self-centeredness and hostility to change. Beth, once the object of Roger’s affections, has dedicated herself to being a wife and mother and politely tolerates his dismal outlook on life. Leigh plays her with a kind of aloofness that puts Roger’s obsessiveness with her in sharp contrast. His persistence in trying to rekindle their relationship pushes her away. Ivan and Beth have clearly moved on, but Roger can’t.

While Frances plays at being an adult in Frances Ha, here in Greenberg, Roger doesn’t even try. He’s been in a kind of arrested development since he was 27 which makes his gravitation to twentysomething Florence make sense. Her youth both attracts and repels him — much like his college-age niece Sara (Brie Larson) and her friends who throw a huge house party toward the end of the film. At first, Roger is drawn to them — even doing drugs with them as he used to regularly do when he was their age — until he ultimately retreats for a bedroom away from their music and partying and leaves a heartfelt, honest voicemail for Florence. He makes a last ditch effort to reclaim his youth by impulsively agreeing to go to Australia with Sara and her friend the next day but backs out just a few minutes down the road, realizing he can’t run from the realities of adulthood or from his feelings for Florence.

In retrospect, Greenberg is something of a transitional film for Baumbach. It’s him working through some of his own insecurities both as a filmmaker and a man in his forties, and it’s hard to overstate the impact Gerwig has had on him since. In fact, you can pretty much delineate his filmography as B.G. and A.G. or “Before Gerwig” and “After Gerwig.” His early successes prior to working with her— Kicking and Screaming and The Squid and the Whale — traded on his own youthful experiences and unique voice while his later successes — Frances Ha, Mistress America, While We’re Young — have clearly traded on hers. The Meyerowitz Stories (easily among his best and certainly one of the strongest Netflix Originals) and Marriage Story both feel less influenced by Gerwig directly, but nonetheless there’s a lighter quality present in both that Baumbach lacked prior to working with her. Like Roger and Florence, Baumbach’s and Gerwig’s sensibilities complement each other in surprising but important ways.

10 years later, Greenberg feels less like a snapshot of a man having a mid-life crisis and more like foreshadowing for Gerwig’s and Baumbach’s creative careers both together and apart. It’s two directionless artists trying to merge lanes wondering if the other is going to let them in. While their first attempt is a little bumpier than later efforts, Greenberg is still ultimately worth the trip to see how these two found new roads and creative destinations.