Pearl Jam turns 30 this year! To celebrate, we’ll be sharing new Pearl Jam content and some of our old favorites all month long as we wait for the official release of Gigaton. Today, journalist Scott T. Sterling looks back at his time spent with Eddie Vedder and reflects on the visible damage that success, fame, and the music industry inflicted on the young band. Also check out our No Code 20th anniversary piece.

I was the greenest of green college journalists when Pearl Jam was in full promotional mode for the band’s debut album, Ten.

It was on my radar because the band’s publicist had been blowing up my phone in hopes of some press on the group. I listened to the cassette that came with the press release and liked it well enough. The publicist quickly arranged for me to meet up with Pearl Jam in East Lansing, Michigan. They would be in town for a show that night with the Red Hot Chili Peppers and Smashing Pumpkins.

I met the guys at a local record store, where they were doing a record signing. Drummer Dave Abbruzzese clearly stood out as the gregarious party boy of the band. 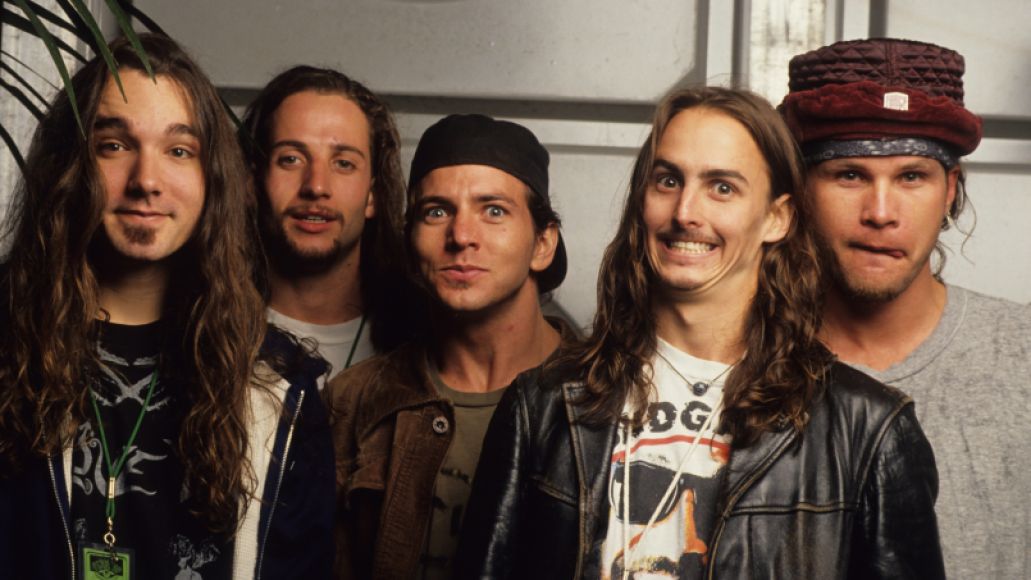 I connected with Eddie Vedder on campus, where the formal interview was to take place around soundcheck. We hadn’t been talking for 10 minutes when it became exceedingly clear that this was not just your boilerplate interview. Vedder wanted to walk around, so we headed outside. There we encountered Red Hot Chili Peppers singer Anthony Kiedis. He was in incognito mode, his hair slicked back into a deceptively conservative style and wearing a pair of horn-rimmed Clark Kent glasses. He eyed me warily before Vedder assured him that I was “cool.”

Kiedis visibly softened and extended his hand. We chatted for a bit about Ann Arbor and Detroit before Eddie and I continued on our walk and interview. At one point, talk turned to electronic music, and he stopped to heap excessive praise on Trent Reznor and Nine Inch Nails as proof that it can be done well.

That night’s show was literally a revelation for me, and I said so in the subsequent piece for the college paper, where I proclaimed Pearl Jam as the future of rock and roll. And I meant it. They showed me everything that so much of rock seemed to be missing at the time. Passion. Conviction. The intense need to make a real connection with their audience. A certain realness that exists outside the machinations of the brutal music industry.

The connection I’d made with Vedder was a real one. When they came through Ann Arbor to play at the Blind Pig, he paused the show to shout me and my article out from the stage and then crowd-surfed out to my spot in the crowd for a high-five. We’d connect again when they played St. Andrews Hall in Detroit, the night when he pushed through a gaggle of gorgeous women all vying for his attention to give me a big hug.

In the months that followed, the explosion of vital new rock and roll, much of it coming from Seattle, suddenly became a thing. And the media did what the media so often does: it ruined everything. 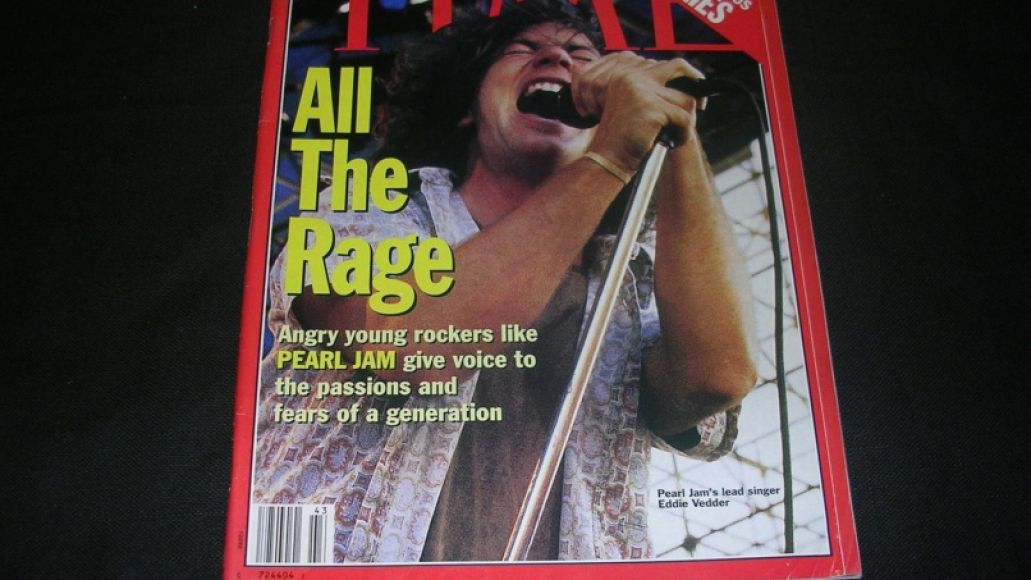 Instead of celebrating the myriad of truly inspired and inspiring bands blasting out of the Great Northwest — Soundgarden, Nirvana, Mudhoney, TAD, Alice in Chains, Mother Love Bone, just to name a few — it all got lumped together as “grunge.” As such, fans suddenly felt the need to choose alliances. Were you a Pearl Jam or a Nirvana fan? For Mudhoney or TAD? While it was being sold to music fans as some kind of singular movement, real fans knew what was really going on.

With Pearl Jam being arguably the most traditional rock and roll outfit of the bunch, their breakout success made a lot of sense. They made songs that already fit comfortably next to the classic rock canon. Pearl Jam ending up being that gateway band, the easy way for a regular, old rock fan to find their way into the then burgeoning “grunge” scene. It’s an appeal that many continue to hold against them. The buzz got so big that TIME magazine came calling, looking to put the band on its cover. Pearl Jam declined. So, TIME simply grabbed a live shot of Vedder and put him on the cover anyway, next to the caption: “All the Rage.”

The cover came not even a week after Pearl Jam released Vs., and it shows. The album is the sound of a band that has achieved all of its rock and roll fantasies over the course of their debut album cycle, and what they saw at the top of that mountain was sheer hell. The labeling, the media manipulations, the increasing demands both personal and professional, being forced to deal with journalists calling you the “future of rock” — it all boiled down to ways that an industry could generate millions of dollars for a dizzying array of people, with the band somewhere near the bottom in terms of priority.

They let the music do the talking, deciding not to produce any music videos for the album, which, at the time, was unheard of for a band of their stature.Vs. was the sound of the band raging back at it all, one last primal scream before they would retreat from the public eye almost completely. The album would go on to sell 950,378 in just its first five days on store shelves, setting a record at the time for the most copies sold during a first week of release. It would sell more than the rest of the Billboard Top Ten that week combined.

Musically, the album veers wildly from brutal and cathartic rockers to delicate, introspective acoustic ballads. It’s a juxtaposition present all across the album: “Animal” into “Daughter”, Side 2 jumping from “blood” to “Rearviewmirror” to “Elderly Woman Behind the Counter in a Small Town”, which still stands as one of the finest moments Pearl Jam has ever produced.

Pearl Jam would go on to maintain a relatively low profile going forward, growing a career that allows them to work and perform on their own terms. It’s a luxury made all the more impressive and humbling when you think about the cavalcade of casualties that we’ve seen from that early ‘90s “grunge” moment.

It was during that time that they made the most headlines by daring to take on Ticketmaster in 1994, a battle that looks all the more prescient in light of recent revelations. Much like the lamb featured on the cover of Vs. (and as road kill on the subsequent tour poster), Pearl Jam had marched right into the slaughterhouse, knowing that they didn’t have much chance of getting out in one piece. Still, they chose to let themselves be the example.

The last time I saw Eddie Vedder was in the parking lot of Ann Arbor’s Crisler Arena in March of 1994. So much had changed since we last spoke. The stakes had somehow been ratcheted up to impossible heights. In less than a month, Kurt Cobain would be dead from a self-inflicted gunshot wound. I spied Vedder getting off the tour bus, so I walked towards him. I could see that he recognized me, but there was something different about him. We hugged, and I looked at him. All I could say was: “Are you OK?” He looked at me with such sad, tired eyes and quietly said: “No.”

I hugged him as tight as I could before he was pulled back into the tour bus. A flash went off, and I saw that someone had captured a photo of me holding on to Eddie Vedder for dear life. I often wonder whatever became of that image.

The last song on Vs. is a Jeff Ament/Stone Gossard composition called “Indifference”. Vedder inhabits the lyrics as though they’re his own, with a sentiment that rings true for a band like Pearl Jam:

I will hold the candle till it burns up my arm
Oh, I’ll keep takin’ punches until their will grows tired
Oh, I will stare the sun down until my eyes go blind
Hey, I won’t change direction
And I won’t change my mind
How much difference does it make?
How much difference does it make?
I’ll swallow poison, until I grow immune
I will scream my lungs out till it fills this room…

It makes a big difference to me. Scream on, my friend. Scream on.

Pearl Jam's Vs. Remains the Sound of a Band Raging Against Its Own Success