When I was a child, I went to a mall and had my picture taken with a tiger cub. I don’t remember much about it, but the sad, cheap, exploitative feel of the encounter has stayed with me. A little more than 20 years later, I married an abusive, drug-addicted, transient man. At first glance, these two life events may seem to have no connection, but they’re both symptoms of a Southern patriarchy that breeds exploitation, objectification, violence, and life outside the law, where even the most heinous crimes become normalized.

Welcome to life in the rural South — and now your Netflix queue.

At first, I avoided Netflix’s popular, new docu-series, Tiger King. At first glance, it seemed like another Duck Dynasty, a garish and insufferable celebration of this kind of toxicity. But as I began to watch, I realized the show’s actually exposing the destructive nature of these types of characters… the likes of which I’m all too familiar with unfortunately.

First, let me say, as a life-long Nashvillian, there are a million fantastic things about the South. The landscape is beautiful, the food is good, and we really do say hello to strangers we pass on the street. I’m currently watching my beloved city rally around its most vulnerable as we deal not only with the Coronavirus, but a series of devastating tornadoes that ripped through our communities, a mere 10 years after recovering from catastrophic flooding. We are strong, and we will rebuild.

While Nashville is a blue metropolis quickly turning hipster, drive 30 minutes out of town, and you’re in the country. Now, please know this piece isn’t meant to insult Southerners; no, my intent is to shine a light on the Southern toxicity that fuels the kind of chaos that has since lead Netflix’s Tiger King to turn heads across the nation. Make no mistake, that culture is real — even in the urban South — and it’s incredibly destructive. And although I’m out of that culture now, I know it well. I grew up next to it. I married into it.

It’s a cult of Southern masculinity, and it rears its ugly head in full display in Tiger King, only in reality, the lion’s den is nothing more than a snake pit.

The Patriarchy is the practice of modeling society after the nuclear family structure with the father at the head. Our society sees this on a grand scale with its leadership, but in the South, it’s particularly prized. In the Bible Belt, male achievement is having a family and providing for it well. For women, it’s landing that man who will provide for you and giving him children. You can have a career, but it probably shouldn’t interfere with your husband’s. This is why MLMs like Mary K and 31 thrive in the South.

But because life is more complex, many Southerners do a complicated dance to maintain this facade. Propping up the ego of the man in your house is prioritized, and so much of my life has revolved around reminding various men that they know best. It’s why nothing was ever good enough when I did it, but my brother got away with failing over and over again. It’s what kept my dad from attending my mom’s master’s graduation ceremony (he didn’t finish undergrad).

Male egos run wild on Tiger King, with Joe Exotic, Doc Antle, and Jeff Lowe constantly using other animals and people to feed that sense of empowerment and entitlement that the Southern patriarchy has told them they deserve. 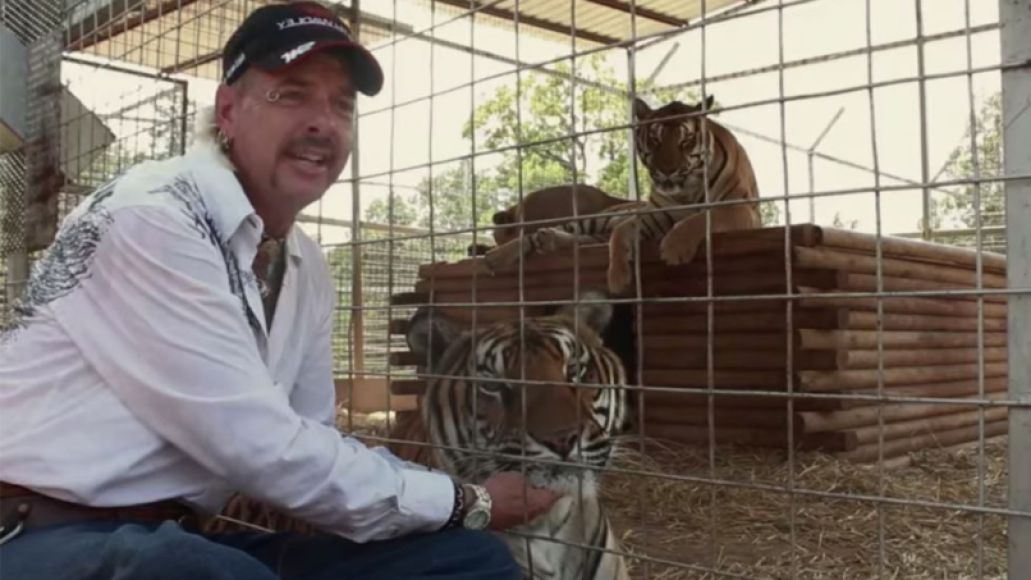 In early episodes, Joe is seen as sympathetic. He was rejected by his family because of his sexual orientation, cast out and excluded from the possibility of attaining the nuclear family goal. But because he’s been denied access to the system he’s grown up prizing, he must create this society for himself. And because of the internalized shame this rejection has caused him, he has also internalized his pain.

These two factors combine in a toxic, new community that breeds more victims. The force of his personality (aided by drugs) gives him the ability to convince two teenagers that they are gay and to marry him. In trying to attain the ego boost lost to him when he was rejected, he must dominate others. He needs constant approval, and the ability to have two young, hot men marry him gives him that validation.

When Joe laments about his two apes that sat in cages next to each other for 10 years, only to embrace upon finally being set free, he might as well be talking about himself. If he had been accepted by his own family, he would likely have believed he was deserving of love and not felt the need to fill his ego with external sources. Just like he deprived his animals of being themselves, his culture deprived him of seeking love in a healthy way.

I’ve also felt this lack of acceptance. I grew up knowing that I needed to find a man to marry me, and that my success (or failure) — not to mention, the caliber of man I could land — would ultimately define me as a woman. But we are so much more. Maybe if I felt unconditional love, I wouldn’t have married someone like Joe. Someone who stole from me. Someone who hit me. Someone who caused me to distance myself from my friends. Perhaps if I didn’t feel the constant need to prove my worth, I would’ve felt free to be who I am. 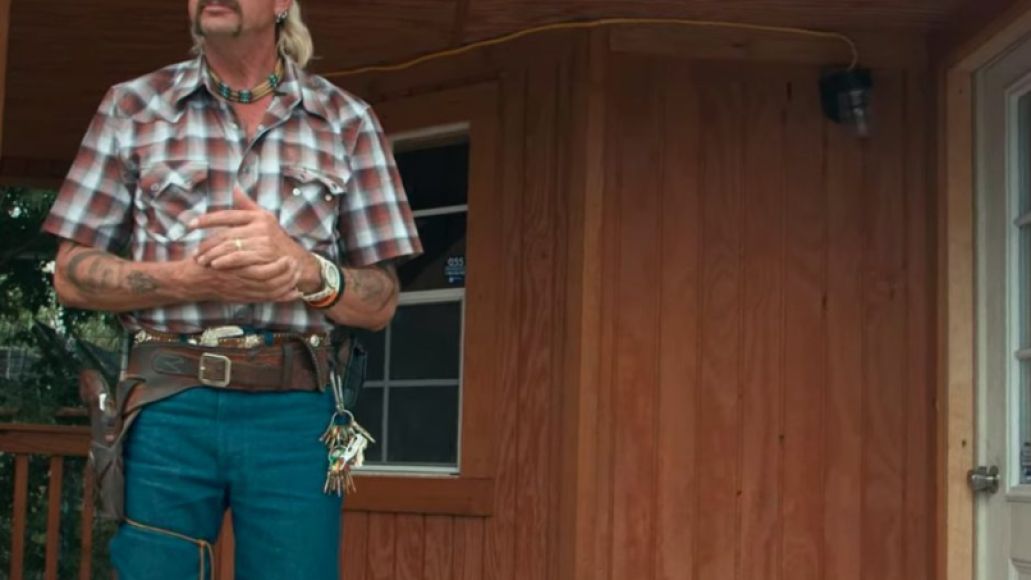 That internalized shame is incredibly toxic. It leads to defying everything in a Fuck It All way. And no, we shouldn’t care what other people think of us, but this often leads to wearing this open defiance proudly in the form of multiple piercings, tattoos, clothing with expletives, and gun holsters. All of these are external signs that show strangers, “I don’t give a fuck what you think. I’m going to do whatever I want, even if it pisses you off. Especially if it pisses you off.” It’s displaced anger from the society that rejected them long ago.

Over and over again, I see my neighbors and family reject factual information that challenges their ego. Toxic Southern “gentlemen” will reject anyone who seems to know more than them or tries to tell them they’re wrong, especially if the one doing so is a woman. If embracing the most outlandish conspiracy theory will keep them from having to admit that they were wrong, they will dive in head first. (It’s what keeps so many rural voters tied to Trump.) Viewed compassionately, this may seem like accepting yourself for who you are — and that’s what they tell themselves. It starts with embracing the rural, “She thinks my tractor’s sexy,” and ends with “the government can pry my assault rifle out of my cold dead hands.”

There’s a learned victim mentality down here. Southern men know how they are viewed from the outside, so they embrace the things that present their definition of masculinity. They assume they’re going to be challenged, so they come out of the gate defiant and combative. I went to a neighborhood picnic where a man had a pitbull on a leash, a gun on his hip, and at least three Confederate flags on his clothing. I asked myself, “What kind of life must he be living that he’s afraid someone is going to shoot him at a church picnic?” The answer is, “A life where he’s internalized that he’s in the wrong. That everyone is out to get him. That not being the best equals being nothing. That the gun on his hip gives him the ego boost he couldn’t find within himself.”

Because the defiant is seen as righteous, people in this system constantly seek out drama. The codependency is strong as is the tendency to create enemies. We see this with Joe’s continued harassment of Carole Baskin. Yes, she is a professional rival, but his response to her is way out of proportion, and would likely be different if she were a man.

My former mother-in-law constantly complained about the dramatic people around her while stirring most of the pots herself. Because she fundamentally saw herself as unlovable, she sought out and forced that love, or at least the illusion of it –from others.

This often manifested in the form of self-pity. Everything was an emergency and I lost count of how many times she told us she was dying. Once we cut off contact, she convinced her boyfriend to send us threatening messages if we didn’t maintain contact with her. In trying to force us to love her, she pushed us away.

Pro Tip: If someone says they hate drama, stay away. 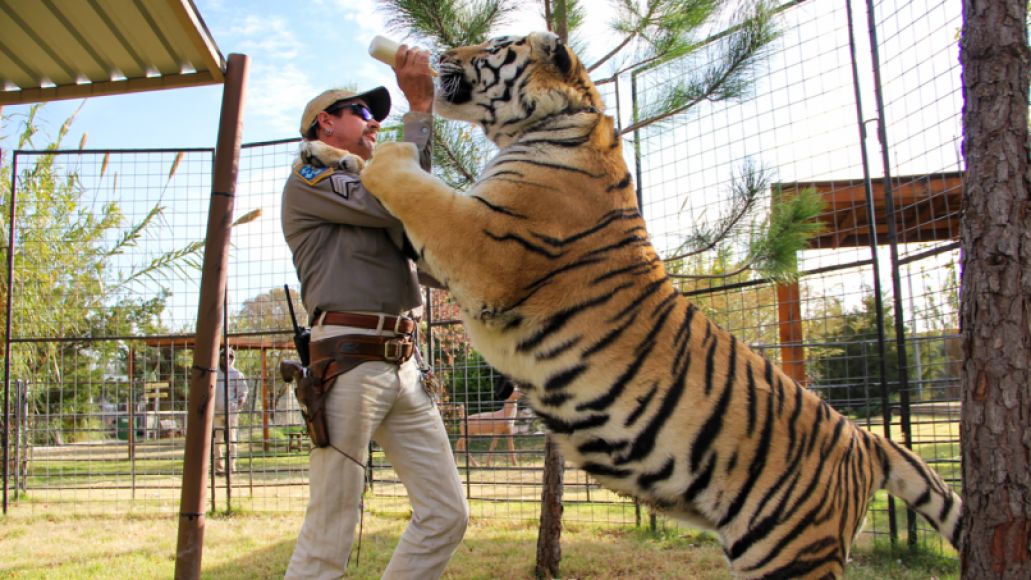 We see so many guns in Tiger King that they stop being noteworthy. Almost every man is shown with one on his hip. We see “target practice” that consists of firing into a lake and at mannequins. Joe fires in the direction of his employees “as a joke.” And Joe’s husband Travis accidentally shoots himself in the head. These guns are another outward manifestation of this toxic masculinity, meant to intimidate those who would challenge. No wonder they’re attracted to tigers. The guns are their fangs, and the camouflage (ugh) their stripes.

When I was in elementary school, I slept over at a friend’s house. While playing in her teenaged brother’s room, we came across a baseball bat outfitted with duct tape and nails and a handgun. He claimed to need them as the sole male in a house with his three sisters and single mom. This perceived threat is another manifestation of the defiance so common in Southern patriarchy. Because everything is viewed as a zero-sum game, someone is always out to get them and they must be ready.