Halfway to Halloween Month continues on Consequence of Sound with an exclusive interview featuring actress and producer Barbara Crampton.

Barbara Crampton is pretty sure she’s had the coronavirus. “I think I had the virus in January, actually,” she tells me on a warm afternoon in April. “I was very, very sick for three weeks, and I had all the classic symptoms.” At the time, she didn’t think much of it. “I just thought I had the regular flu because we weren’t really clued into the COVID scare yet.”

She’s not entirely sure, though, and isn’t that fun. It’s an anxiety we’re all feeling today in this chaotic pandemic, and Crampton is well aware of that. “It’s really hard for people to live with the unknown. That’s what we’re all struggling with,” she says. “It’s really hard to just surrender to this moment, but that’s kind of what we have to do.”

There’s a pragmatism to Crampton that’s incredibly affecting. Talking to the Hollywood icon is a lot like speaking with a college professor before Fall break. She’s patient with her words, assuredly analytical, and runs circles around you. She’s also a storyteller and hearing her discuss life in quarantine is as cinematic as her performances on screen.

Elvira on the Comforts of Horror, Me Too, Netflix’s Tiger King, and Living Next to Dave Navarro

Joe Bob Briggs on Life in Quarantine, Outrage Culture, and Returning to the Drive-In

But we spoke on a lot more than just strictly Covid-19. No, the actress, producer, and mother of three went deep into the past, present, and future of her career. She shared how she’s paving new roads for women in horror, detailed the ways Hollywood has changed (both good and bad), and revisited her triumphant return to the genre.

On life in quarantine 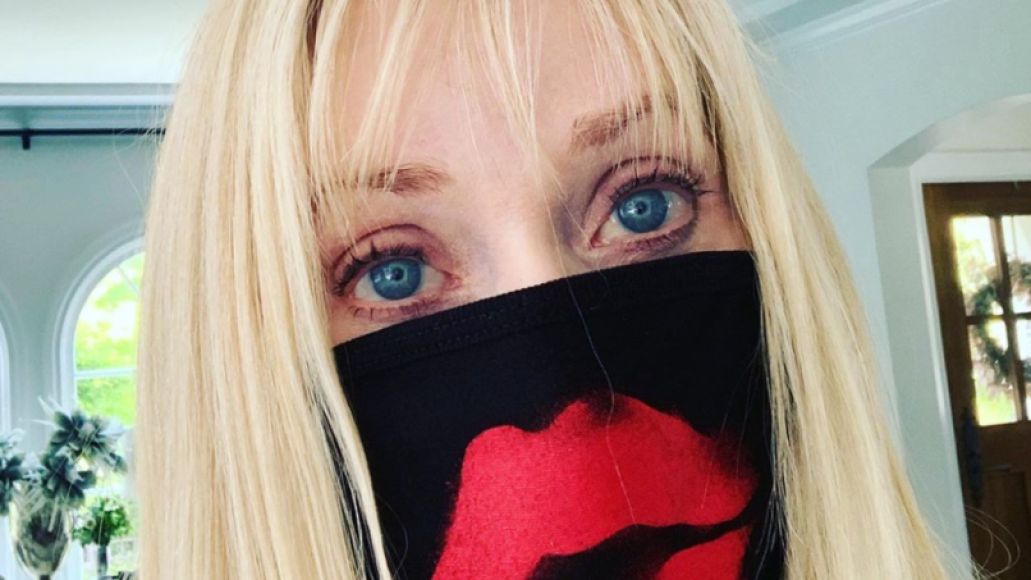 I’m probably going to the store too much. But I have two kids at home, and my husband, and I’m cooking a lot now because we’re not ordering out. I feel like I’m going to the grocery store every two to three days same. We’ve been wearing masks. We had fires here in Northern California last year, and so I have one box of N95 masks. So, we’ve been wearing those, but then people have been sending me cloth masks. So, we just have this one box that we keep reusing.

I think I had the virus in January, actually. I was very, very sick for three weeks, and I had all the classic symptoms: a headache, body aches, fever, chills. I had the dry cough, which started almost immediately, and it didn’t leave for three weeks. I got the cough medicine with codeine and it didn’t help, and I thought, That’s weird. It always helped before when I had a cough, but I just thought I had the regular flu because we weren’t really clued into the COVID scare yet.

But now I’ve been reading articles that they’re saying they think it’s been in America since December. And we had such a bad flu season that people now are saying it was probably the COVID, but I’m supposed to get an antibody test this week. But even Dr. Fauci yesterday was saying that some of the antibody tests that were rushed through the FDA are a little faulty. He said there’s one out there, but he didn’t say what it was, that’s 90% accurate, so I’ll take that. I don’t know what tests I’m getting, but I go to a very good doctor up here, and I’m sure they’ve researched it and gotten whatever the best test is.

It’s really hard for people to live with the unknown. That’s what we’re all struggling with. It’s really hard to just surrender to this moment, but that’s kind of what we have to do. We do have to ask our administration and the healthcare providers and the schools — I have high school children at home — we have to keep asking these probing questions. But we also just have to surrender to what’s being asked of us, of humanity, at the moment — and that’s hard. 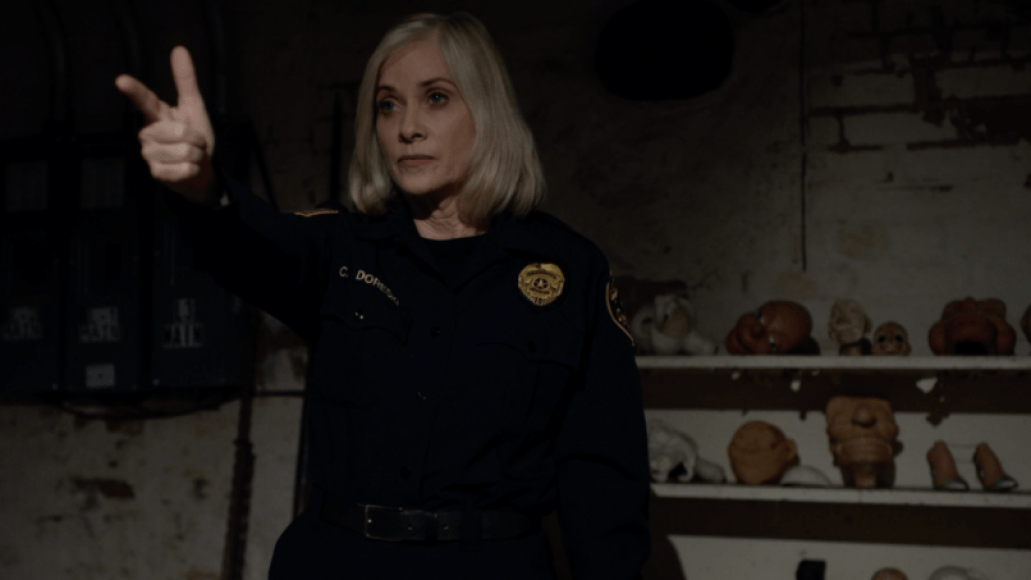 I am busier than I’ve ever been. I’m doing a lot of watch parties on Twitter. I’m doing Puppet Master tonight. I did We Are Still Here on Shudder the other day. It was great! Then different little horror groups are asking me to do some of my own movies that are playing on Hulu or whatever. So, I did Beyond the Gates, and then I did Road Games.

I get excited about watching the movie together. We’re talking about behind-the-scenes stuff — usually the director’s on with us, maybe some of the other actors — and fans are asking questions and I’m able to answer them and I know what I’m talking about. So, you know, I feel like an expert in something. I feel like I have a purpose. I feel like I’m bringing another level of entertainment to people regarding my movies. It makes me feel positive, like I’m contributing to the ease of everyone and bringing some happiness and joy to horror fans. I’m delighted. I’m delighted to do it.

But I’m keeping myself busy with cooking a lot like everybody. I’m going to the store, breaking out my cookbooks that are all dusty and that I haven’t looked at in years since I’ve been so busy working, flying around the country, and getting my family takeout meals. Now that I’m actually cooking, they’re ecstatic and happy because I’m feeding them gourmet meals every night. 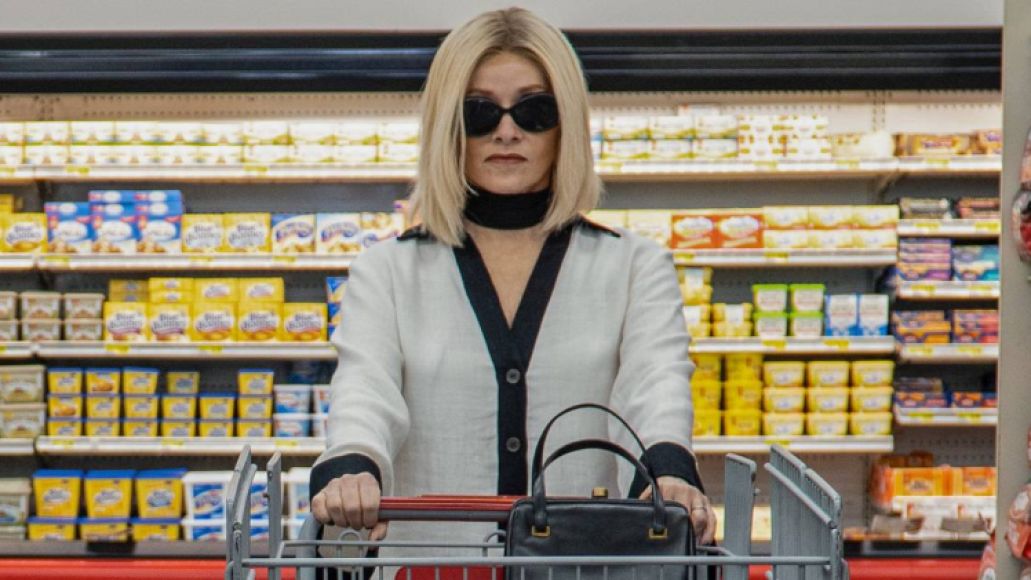 I also just wrapped production on a movie that I produced called Jakob’s Wife. It’s something I’ve had in development for years, and we finally got the financing for it and got a director. We were able to secure a location in Mississippi, and we shot it in February.

I came down with the virus — or what I think was the virus — on January 10th, and then I was sick for three weeks, so I couldn’t be there for pre production. But I flew in about six days before we started filming. We filmed the whole month of February and then we wrapped on February 29th. On March 3rd, we all flew home, and by March 8th, we had the lockdown in California.

We got that movie in under the wire. Now, we’re in post and I’m looking at the footage. The director’s making a preliminary assembly and cut of the movie before we bring an editor in, and so we’re looking at all of that and talking to different people about different aspects of post production.

So, I have a lot to work on that’s gonna keep me busy.

On what to expect from post-pandemic horror

I do think that people are starting to make little content at home right. I’m even doing little Facebook and Instagram videos that I hadn’t really done before. So, I’m getting a little bit more creative, but Mike Mendez actually wrote a little thing for himself. He directed it, designed it, and brought in Guillermo del Toro as a character. His mouth is moving from a picture on this little robot, and it was hilarious and so great and so creative. I also saw another filmmaker say he was going to make a whole movie from his house. Maybe have one or two friends come over and stand far part. [Laughs.]

On watching horror versus making it 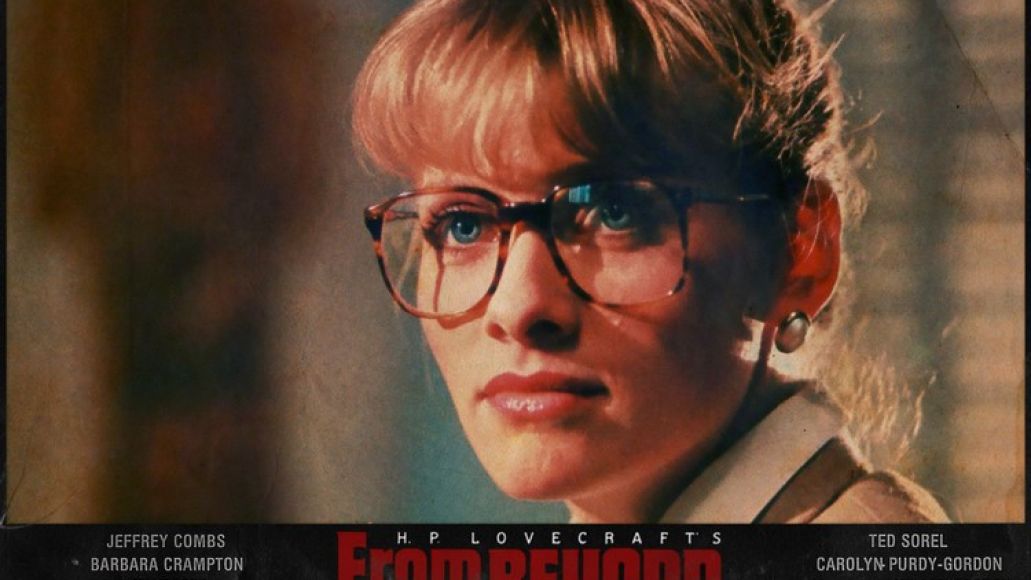 From Beyond (Empire Pictures)

I’m a good audience. So, something like The Platform is gonna gross me out, even though I know it’s fake. I know it’s moviemaking. But, when I’m working on my own stuff, it doesn’t gross me out as much.

From Beyond is one of my favorite — if not my favorite — movies I’ve ever worked on, mostly because I had a fantastic role. It came at a time when they weren’t giving a lot of women those kinds of roles in film. We did have Linda Hamilton in The Terminator, we did have Sigourney Weaver in Alien, but those were big movies. This was a smaller movie and it was a very big part — especially on the heels of the success of Re-Animator, where Jeffrey Combs is the iconic character. To then turn around and give me the biggest role in Stuart Gordon’s next film was quite a gift to me in my career. And also to give me the kind of trajectory that character had throughout the story.

But there was a lot of gelatinous fake flesh from the notorious monster being thrown around — and it was disgusting, and I was next to it all the time. But, you know, I saw the latex, I saw the pain, I saw the methyl cellulose that we used as the gelatin over the actual special effects makeup to make it look even more juicy. And I knew what that was. Methyl cellulose is a food thickener. They used to use it in McDonald’s milkshakes back then. I don’t know if they still use it today. They probably don’t. But it’s a clear, cold jelly, and it was on everything. It was on the monster. It was on my clothes. It was on my face. It was on objects when we went into the beyond. It was everywhere. But I saw it for what it was: It was makeup.

So, my own films don’t give me pause and make me disgusted to a certain degree because I’m fascinated by the process and I love special effects makeup. When I’m watching it, though, I’m a good audience and I get as scared as the next person, and turned off, and disgusted, and titillated by it, too — you know, just like the best horror fans!

Read ahead to find out why she returned to the genre…

Barbara Crampton on Loving Horror, Changing the Genre for Women, and Surviving the Pandemic