The Dark Side of Disney is Christopher Thiessen’s regular deep dive into the storied Disney Vault. But as he’s discovered, there’s usually a lot more going on in these beloved classics than we noticed as kids.

Once upon a time, Walt Disney dared to create an entire art form: the feature-length animated film. In 1937, there was no precedent for the amount of work Disney’s Snow White and the Seven Dwarfs would require. On a million-dollar-plus budget, Disney assembled hundreds of artists, who in turn assembled over two million individual pictures to create 83 minutes of magic. Now, 83 years later, the animation world is a roughly $270 billion industry. Talk about return on investment.

The film became a blueprint not just for animation, but for a myriad of recurring Disney motifs — princess stories, fairy tale adaptations, the allure of wishful thinking, humorous sidekicks, evil stepmothers, and so much more. We’ve sung the songs since childhood. We’ve retold the story over and over. But the apple isn’t everything it seems. Underlying the merriment are deeper themes of horrific evil, working-class life, and revolution against corruption. Let’s dive in.

Tale As Old As Time: 1937’s Snow White is an adaptation of a 19th century fairy tale as told by the Brothers Grimm, the first of three Grimm adaptations in the Disney canon. (Sleeping Beauty and Tangled would come in 1959 and 2010, respectively) The original fairy tale, like its faithful adaptation, tells the story of a vain and envious evil queen whose beauty is overshadowed by that of her stepdaughter. However, where the film devotes most of its screen time to the young princess and goofy dwarfs, the original story keys in on the queen as the subject of the cautionary tale’s arc.

While the Disney film has its horror elements (more on this later), the Grimm brothers managed to further darken the story. When the queen orders her huntsman to return Snow White’s liver and lungs (not her heart, as depicted in the film), she orders her cook to boil them so she can eat them, sprinkled with salt. In the end, when the queen meets her downfall, she doesn’t simply fall to her death as she does in the film. No, instead, Snow White and her kingly husband pull shoes of iron out of burning coals and order her to dance in them until she dies. Instead of offering a philosophy of vengeance, Disney opted to let the queen’s violence backfire — a trope they would continue with the deaths of other villains like Gaston in Beauty and the Beast. 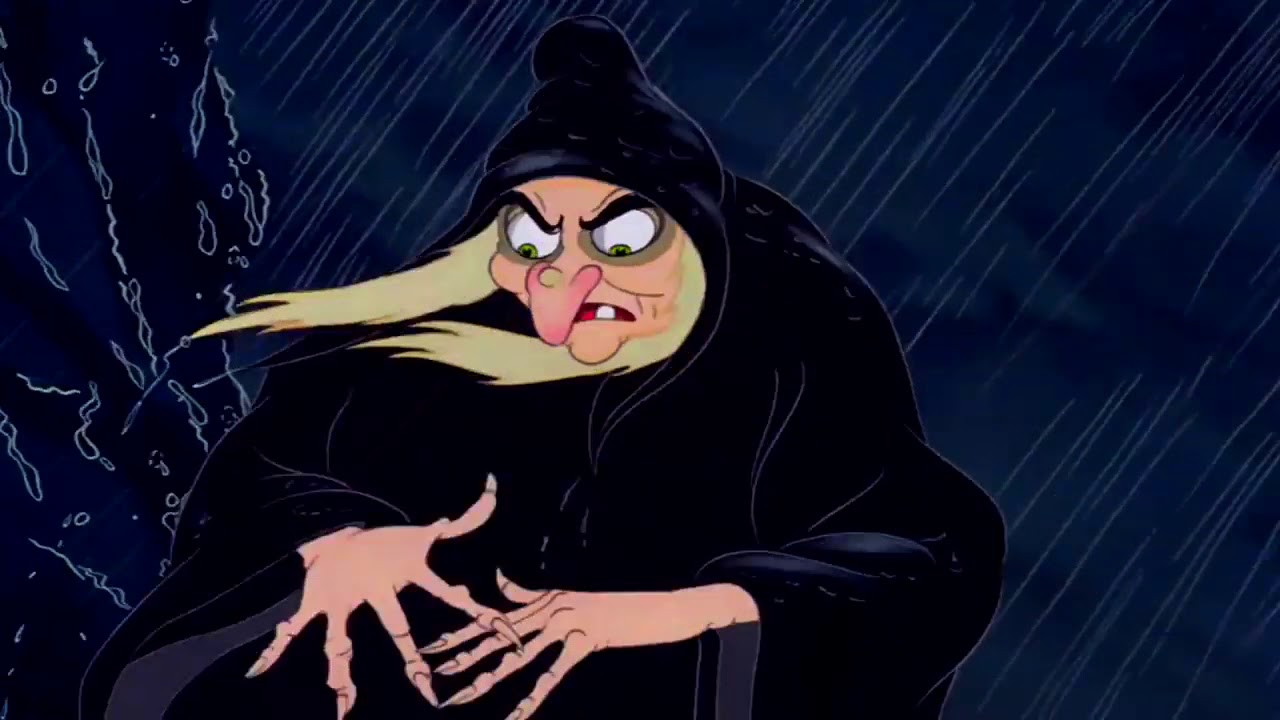 A Very Important Date: Though it would take weeks longer to recreate the film for distribution across America, on December 21, 1937, Snow White premiered at Hollywood’s Carthay Circle Theatre in front of an audience including Shirley Temple, Charlie Chaplin, Cary Grant, and Walt Disney himself. Demand for tickets was so overwhelming that 30,000 movie fans who couldn’t score a ticket crowded outside the theater anyway.

The film’s historic importance was immediately recognized by critics and casual filmgoers alike. In his initial film review for Variety, John C. Flinn wrote, “The title indicates that the appeal might be limited to children. However, once the true artistic merits of ‘Snow White’ are universally proclaimed and accepted, adults will crowd the youngsters out of these acts.” How prophetic Flinn’s assessment would prove. While often billed as children’s entertainment, animated films from Snow White to the present carry elements of storytelling, art, and life that can’t be ignored, nor should they be.

That Wasn’t There Before: As an adult revisiting Snow White, maybe for the first time since childhood, you’re certain to catch scenes, comments, jokes, and disturbing elements that flew over your head as a kid.

You probably remember the queen’s horrific evil and the classic line, “Magic Mirror on the wall, who is the fairest one of all?” However, you might not remember the first time she addresses the mirror, she calls him the “Slave in the magic mirror.” The dark implications of slavery and totalitarian authority are just eerie. While Disney mishandled depictions of slavery elsewhere (i.e., Song of the South), here it is treated as appropriately inhumane and menacing.

In another scene, after the queen’s Jekyll and Hyde-like transformation into the old hag, a brief overlooked scene further highlights the queen’s treacherous imprisonment tactics. As she descends into her dungeon, the queen passes the skeleton of a deceased prisoner reaching for a pitcher of water. “Thirsty? Have a drink,” she cackles as she kicks the pitcher through the skeleton’s bones. It’s unsettling, a lot more unsettling than memory serves. 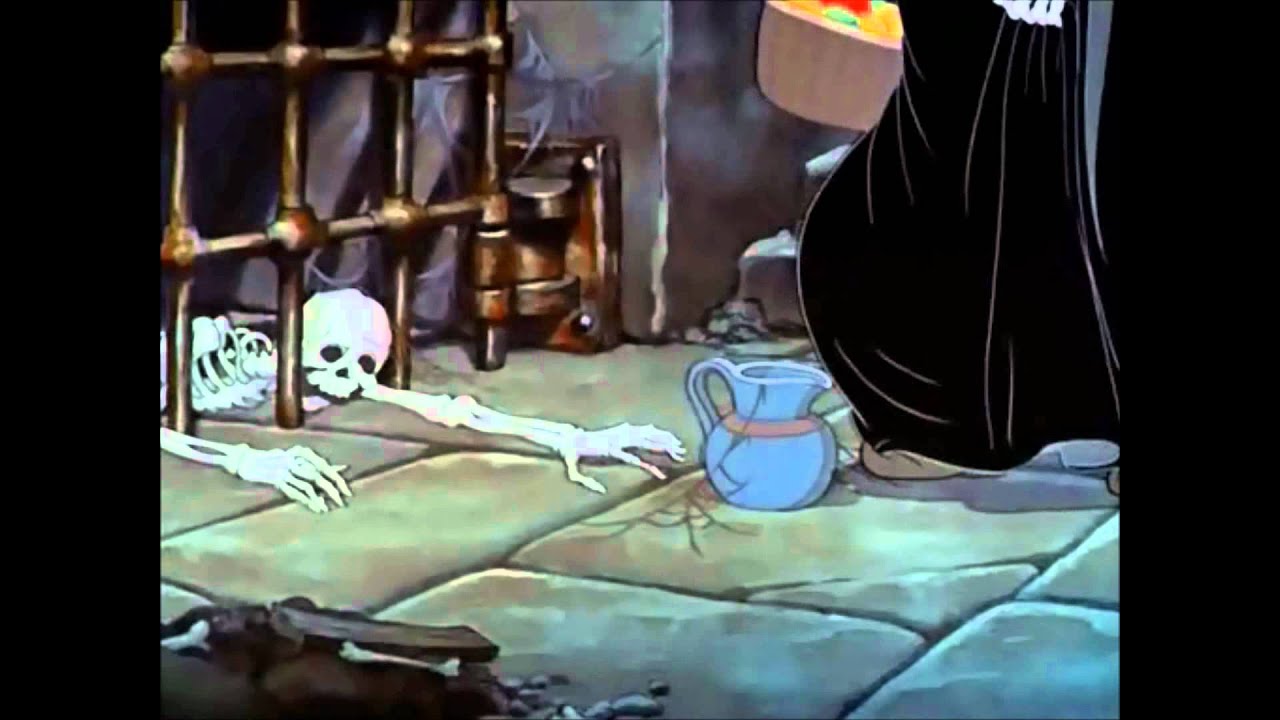 I See The Light: Disney never makes you work hard to discover the meaning of their films, especially cautionary tales like Snow White. The consequences of vanity, envy, and unnatural magic are clear on a surface level. But if you look a little closer, something else becomes clear: Snow White is a film about class, authority, and revolution.

The ruling class is a class of one, the evil queen who fills her throne with totalitarian power and dark corruption. Besides the almost non-existent (and non-essential) prince, every other character we meet in the film belongs to the working class. Yes, even Princess Snow White who is forced into servanthood all her life.

In the song  “Someday My Prince Will Come”, classically embraced as a romantic ballad, Snow White pines for more than just a husband. While romance has its place, Snow White crescendos as she considers the idea of escaping. “Away to his castle we’ll go/ To be happy forever I know,” she sings, knowing that going “away” will provide the respite she needs from her suppressed social role and evil government control.

Next, we meet the Huntsman, a character instructed by the queen to assassinate Snow White. Out of fear of the queen’s power, the Huntsman follows orders. But at the point of murder, the Huntsman chooses life, goodness, and mercy over obedience. It’s an act of defiance. The Huntsman, knowing the queen may well discover his deception, risked his own life to fight for the preservation of life. We’re never told whether the Huntsman suffered the consequences of his actions or not. Either way, his act of mercy is the spark of a revolution against the queen hiding between the script’s lines.

Finally, we meet the seven dwarfs, the main embodiment of the fairy tale’s working class. “We dig dig dig dig dig dig dig/ In a mine the whole day through,” they sing in a chorus reminiscent of the monotony of Rihanna’s 2016 hit “Work”. The dwarfs’ work is purposeless and futile, as they later sing, “A thousand rubies, sometimes more/ We don’t know what we dig them for.” We never find out the purpose of their digging, but considering their humble abode, it’s clear they’re not working for themselves and reaping the spoils.

When they’re met by a fleeing Snow White in their cottage, they embrace her as one of their own (though their initial fright of the “monster” is hilarious). They protect her and warn her against the wicked wiles of the queen. Of course, Grumpy’s misogyny and Dopey’s treatment by the dwarfs is problematic. However, the dwarfs are the true heroes of the film. When they discover Snow White supposedly dead after eating the poisoned apple, the final spark of revolution is lit.

The dwarfs mobilize to overthrow their corrupt government and avenge the death of innocence. As already mentioned, the queen spells her own demise by falling off a cliff. However, it’s the bravery of the seven dwarfs, the Huntsman, even Snow White to an extent, which revolutionized their world and put an end to the evil monarchy.

History would have you believe Snow White and the Seven Dwarfs is a simple tale of a damsel in distress and a heroic prince who overcomes the curse of evil. Don’t be deceived. It’s a horror film revealing the horrors of corrupt government. It’s a rallying cry for the working class to embrace their collective courage and stand up to power. It’s an exhortation that goodness is worth fighting for, even when it might cost your own life. And yeah, the songs are catchy, too.

Need a re-watch? Snow White and most of the Disney canon are available to stream on Disney+.

Magic Mirror on the Wall, Here's Why Snow White Scares Us All