The Pitch: “When people see this they may say, ‘Well, he wasn’t really a nice guy. He may have been a tyrant.’ Well, that’s you. Cause you never won anything,” his Airness spouts. The 1997-98 NBA season would host the end of an era. For the second time in Michael Jordan’s career he’d be chasing a three-peat. For the second time in his career, he’d retire. Phil Jackson, knowing the end was drawing near, termed the season “The Last Dance.” To these ends, the Bulls organization offered a camera crew unfettered access to the team during their final championship run. The resulting footage remained in storage until director Jason Hehir and ESPN Films arrived. Their 10-part documentary series, The Last Dance, follows the waning days of a dynasty while dissecting the complicated mythology around the greatest basketball player ever. 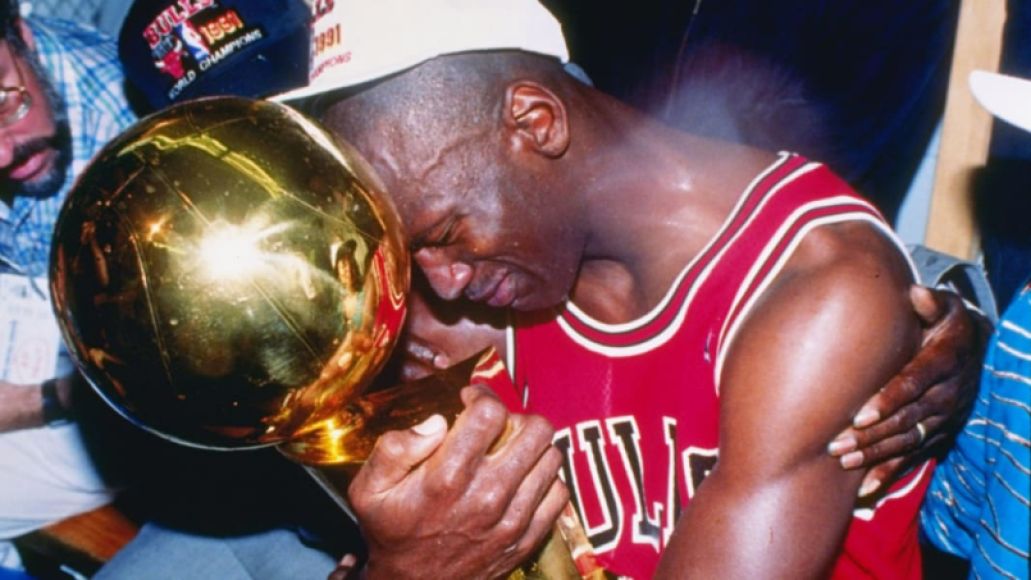 The Air Apparent: When arranging the available footage, Hehir (The Fab Five, The 85’ Bears, and Andre the Giant) operates on two opposing timelines: The biographies of the team’s key players and their formative years alongside the 98’ season itself. He opens with the drafting of Jordan and Scottie Pippen, the hiring of general manager Jerry Krause, and the humble beginnings of head coach Phil Jackson and rebounding extraordinaire Dennis Rodman (two figures with more in common than the general public might think). He juxtaposes the formation of the team—initially a tightly bound collective of doe-eyed talent who at varying points were enemies—to the fractured championship group on their final ride.

If the docu-series can be categorized by sections, then episodes one through three demonstrate the growing pains of MJ reviving a moribund franchise once outdrawn in attendance by an indoor soccer team. It’s Jordan and co. before their invincibility, back when they were the doormats of the Bad Boy Detroit Pistons. However, viewers are also given hints of the MJ to come. For instance, during the 85-86 season, the young superstar suffered a near-season ending injury. The team doctors told him if he returned to play, he’d have a 10% chance of re-injuring his ankle and ending his career. When team owner Jerry Reisndorf explained the gravity of the situation he asked, “If you had a headache and a doctor gave you 10 pills and one of them could kill you, would you swallow the pills?” To which Jordan snaps, “Depends on how bad the fucking headache is.” In essence, it’s the creation of the tunnel-visioned win-at-all-cost legend.

In contrast, during the ‘98 season, Bulls players found themselves at war against the front office and Krause, while Pippen committed to a lengthy contract holdout and Rodman kept up his effervescent yet tumultuous lifestyle as the NBA’s problem child. All of these events are of course given context through present-day interviews with Jordan, Pippen, Rodman, Jackson, and Reisndorf. 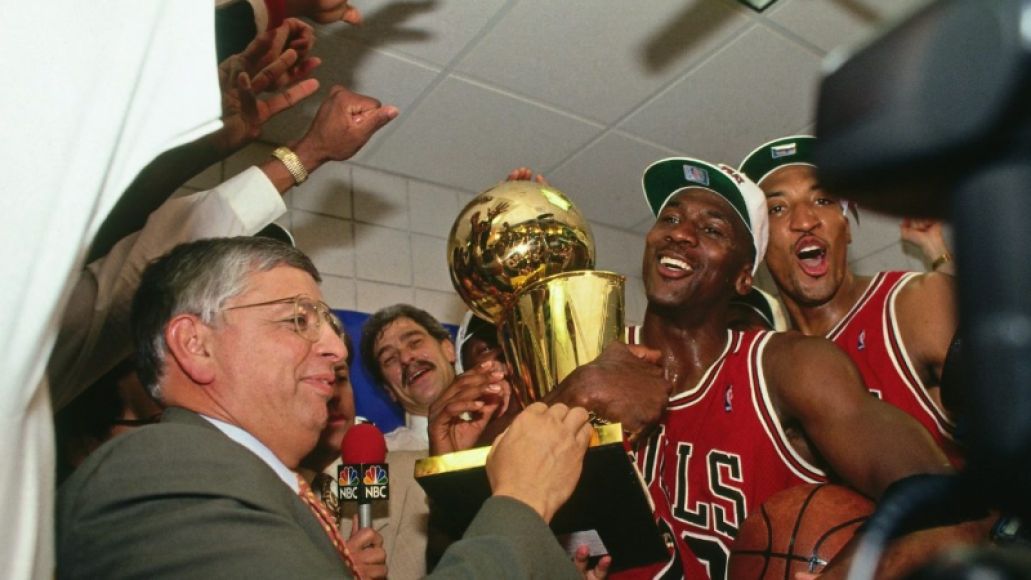 Be Like Mike: While Episodes 1-3 charts the ascent of the Bulls, four to seven captures the creation and pressures of the Jordan brand. Hehir begins to strip away the layers around his Airness by examining the span where Jordan began to add walls around himself. Because really, the baby-faced straight-edge Jordan of the 80’s is far different from the present-day impenetrable man casually lounging in his lavish mansion. In most of the historical footage, it’s rare to see the basketball great alone. He’s usually surrounded by fans accosting him for autographs or the media’s flashing cameras. In one pointed moment, he switches from freely joking with his teammates in the locker room to putting on a professional face when he talks to reporters. During this period, MJ made Nike into a dominant shoe brand, filmed commercials with Spike Lee, and played with the Dream Team during the 1992 Summer Olympics. For all of these accomplishments, his ambitions remain monetarily and athletically focused.

The Last Dance is ESPN Films’ longest docu-series since O.J.: Made in America. While the latter deconstructs the cultural significance of its subject in relation to America’s racial history, the former is more myopic. Hehir makes the lack of such examination, telling in itself. Jordan still remains a consumable product exported around the world for the expressed purpose of enriching himself and the NBA. In a decade when the basketball legend and Oprah were the most significant Black figures in the world, MJ viewed his responsibility as solely playing basketball. When the Black Senatorial candidate Harvey Gantt ran against Jesse Helms in North Carolina (Jordan’s home state), the basketball player refused to endorse Gantt. “Republicans buy sneakers too,” he’s quoted as saying. Apolitical, a stance Barack Obama partly chastises in his interview, Jordan watched Gantt lose. He chooses the broader marketability of his image over using his influence for actionable political change.

How much responsibility did Jordan have to perform, otherwise? The basketball player remains mum, even today. But as Obama also notes, as role models, Black figures are often held to unfair standards. That is, the downfall comes swifter and the criticism arrives harsher, especially for an athlete like MJ who was expected to be everything for everybody. “It’s like a game is stacked against you. It’s a game you can’t win,” Jordan says with resignation.

The G.O.A.T. In later episodes, as the NBA legend loses his father (a loss that still hurts him today and invites his greatest vulnerability), finds himself embroiled in a gambling scandal, and plays baseball, we watch as he tightens his grip around the title of the “Greatest of All-Time.” Whenever gametime footage of Jordan and the Bulls flashes across the screen, strings score their exceptional talent. Moreover, Hehir finds no shortage of past players — Magic Johnson, Larry Bird, Isiah Thomas, Patrick Ewing, Charles Barkley, etc.—to extol the eminence of this franchise. It’s also heartening to see the late-Kobe Bryant and David Stern on screen, too. In every dunk, defensive steal, and championship celebration, viewers witness the team’s legacy and virtuosity.

Even so, the draw is always Jordan. Throughout the docuseries, he’s unvarnished, honest, and absolutely maniacal. This is Hall of Fame speech Jordan. There’s nothing better than seeing Gary Payton talk smack and then producers show his interview on a tablet to Jordan, only for the Bulls great to laugh out loud. Assuredly, he’ll find a way for payback. MJ takes no prisoners as he takes offense at comparisons to himself and Clyde Drexler, posts LaBradford Smith as bulletin board material, and excoriates teammates for not getting on his level. “Was he a good guy…?” former teammate B.J. Armstrong rhetorically shrugs. A compulsive competitor—which reporters like J.A. Adande, Bob Costas, Michael Wilbon, and Andrea Kremer marvel at; while former-Bulls Steve Kerr, Bill Wennington, Toni Kukoč, and Horace Grant remember in a mixture of disbelief and humor — Jordan displayed an incredible will to win. He’s all here. Human and legend, at once.

The 10 Best Basketball Films of All Time

The Verdict: Though the initial hook of The Last Dance is the unprecedented behind-the-scenes access offered by camera crews during the ‘98 season, it’s really the charting of Jordan’s rise and his current interviews that give the 10-part docu-series its drama. Beautifully composed and edited together, the program serves as religious text for those who still exalt at the shrine of his Airness. Moreover, for fans who watched the incredible and nearly unparalleled run of success this franchise experienced during the 1990’s, The Last Dance is a pulsating celebration of greatness.

Where’s It Playing? The Last Dance episodes one and two will premiere April 19th on ESPN at 8 and 9 pm, respectively—with eight more episodes playing over the course of five weeks until May 17th.