A New Mystery: Following a prologue that shows how Shaggy (Will Forte), Scooby-Doo (Frank Welker), Daphne (Amanda Seyfried), Fred (Zac Efron), and Velma (Gina Rodriguez) met and formed Mystery Incorporated, the film flashes forward 10 years as the gang is trying to find funding for their new base of operations. They are approached by potential investor Simon Cowell (yes, really), who refuses to fund the group after declaring Shaggy and Scooby inessential to the team.

Soon after, the teenage hippie and his dog are attacked by a squadron of chainsaw-wielding robots before they are saved by the Falcon Fury and its inhabitants: Blue Falcon (Mark Wahlberg), Dee Dee Sykes (Kiersey Clemmons) and Dynomutt (Ken Jeong). Together, they are trying to find the three skulls of Cerberus (yes, that Cerberus) before Dick Dastardly (Jason Isaacs) can use them to open the gates of the Underworld for his nefarious scheme.

Oh, and Fred, Daphne and Velma are driving cross-country in the Mystery Machine to find their missing friends. 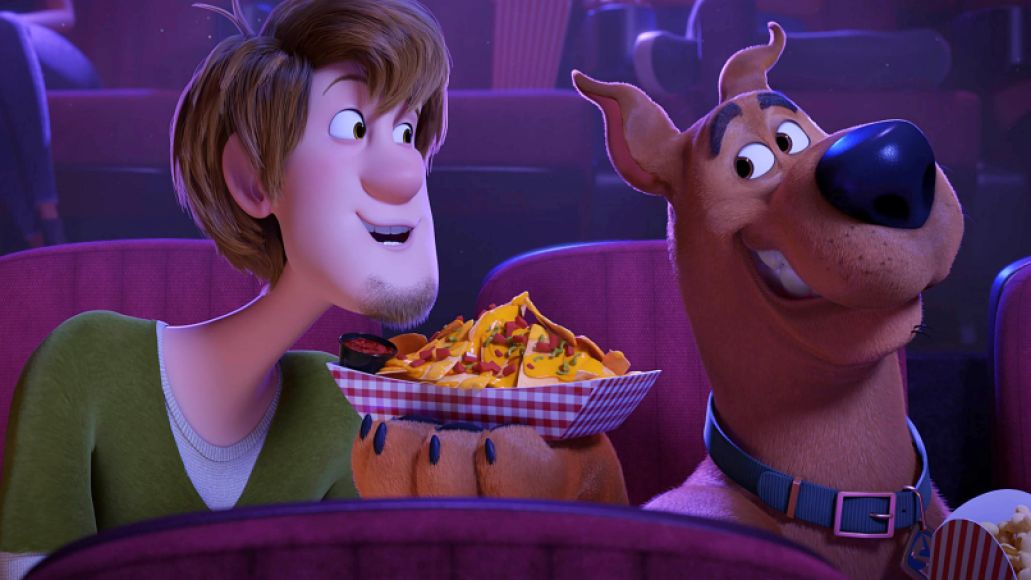 Caveat: I’m going to be upfront: I’m, like, a total Scooby-head. Born at the tail-end of the ‘80s, I grew up watching Scooby-Doo reruns on Cartoon Network all throughout the ‘90s (there were eight different iterations of the show at the time). Scooby-Doo was my childhood, so the review you’re about to read may show some bias. Make of that what you will.

Let’s Split Up, Gang! Scoob! is an ambitious film. Essentially a vehicle to kick-start the Hanna-Barbera Cinematic Universe, it features characters from no less than four different Hanna-Barbera properties (and if you think that’s a lot, just wait for all the teases shown in the end credits). Because of this, there’s a lot going on in Scoob!, and one can’t help but wonder what the film could have been had the creators simply stuck to the tried-and-true formula of those classic Scooby-Doo cartoons.

Look, I get it. Warner Bros. wants to make more movies out of a bunch of these old IPs, but the only one with enough brand recognition is Scooby-Doo (it is the only one that’s still churning out new shows 50+ years after its inception, after all). So it falls on Scoob! to introduce the lesser-known properties to new audiences. 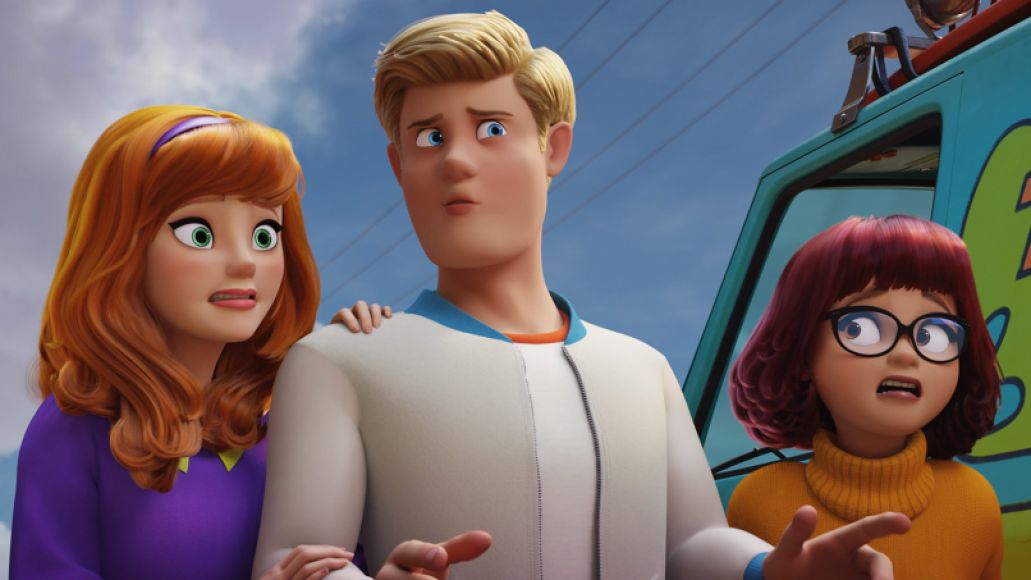 The problem is, the film is being marketed as a film about Mystery Inc, when in fact they are really just guest stars in their own movie (there’s a reason the trailers only feature footage from the first 30 minutes of the film). That’s a lot of pressure to put on a movie that’s supported by a mere 87 minutes, which makes it all the more disappointing that the gang is separated for a full hour of its runtime. Sure, the gang splitting up is a staple of the cartoon show, but this is taking things a bit too far.

That being said, Scoob! isn’t a bad movie. In fact, it’s quite delightful! That it manages to cram as much as it does into its all-too-brief length and still make sense is a testament to the film and its creators. The animation is bright and bubbly (the action sequences are utterly fantastic), the central mystery is compelling and no scene overstays its welcome. To top things off, it’s funny.

Scooby Snacks: Post-2000, Scooby-Doo began morphing into a self-aware version of itself, and some of its direct-to-video films have taken that humor one step (or 20) too far (looking at you, Return to Zombie Island). Scoob! toes the line well, balancing the meta humor with some genuinely heartfelt moments. Some of it works (a bowling alley employee describes Shaggy as “this middle-aged man’s idea of how a teenage hippie talks”). Some of it doesn’t (Tracy Morgan is in this movie). Some of it feels just plain dated (one of the Simon Cowell jokes is ripped right out of Scary Movie 3, a movie that came out 17 years ago). 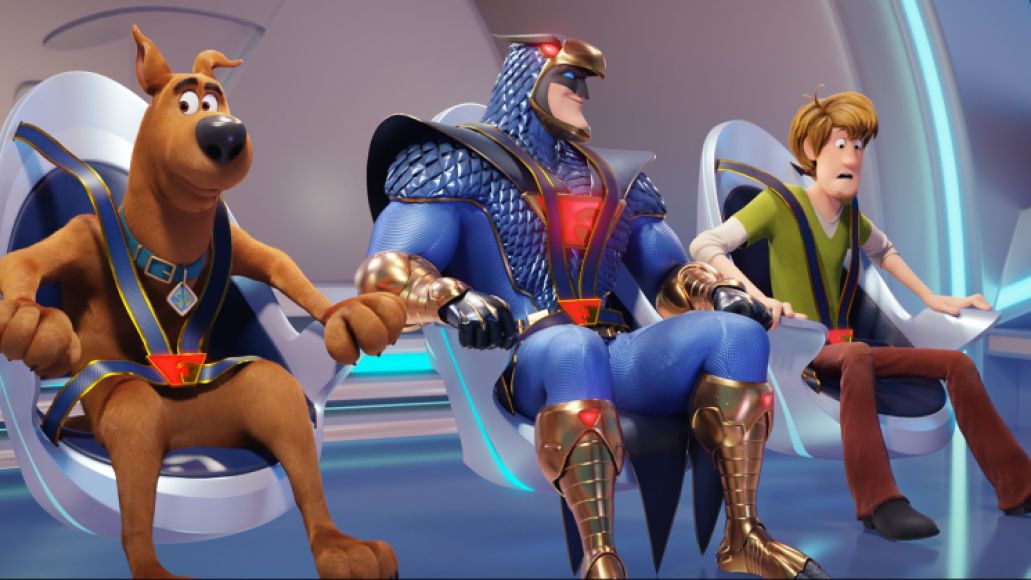 Still, many of the jokes will work equally for children and adults, though some parents may raise a few eyebrows on more than one occasion (Dastardly screams “I’m a Dick!” when Scooby, in his Scooby voice, refers to him as “Rick”). This being a family film, viewers should expect plenty of life lessons on accepting change, the power of friendship, and being a good person, among others. Scoob! manages to get its points across without being too preachy, which is a rarity in a film like this.

It’s clear that the makers of Scoob! are familiar with the franchise. This should come as no surprise, considering the fact that director Tony Cervone helped bring us Mystery Incorporated, arguably one of the best (and most meta) iterations of the franchise to date. Easter eggs are sprinkled throughout the film: From a poster of The Hex Girls to a scene set at Messick Mountain (as in Don Messick, the original voice of Scooby-Doo) to a near-perfect recreation of Scooby-Doo, Where Are You?’s opening credits, fans will have a ball spotting all of the Scooby Snacks that Cervone and his animation team have carefully integrated into the film. Repeat viewings will undoubtedly be rewarded.

Meddling Kids: The five members of Mystery Inc. are cultural icons that have influenced multitudes of pop culture throughout the Scooby-Doo franchise’s 50-year run. From Buffy the Vampire Slayer to Scream 3, you’ll find a Shaggy, a Fred, a Daphne and a Velma in most works of fiction. Scoob! attempts to modernize our group of four teenagers (Velma is now Latina, Fred still wants to fuck the Mystery Machine, Shaggy has added something called “ketchup leather” to his sandwiches), but we spend so little time getting to know them that it’s hard to recognize these new versions of the characters. 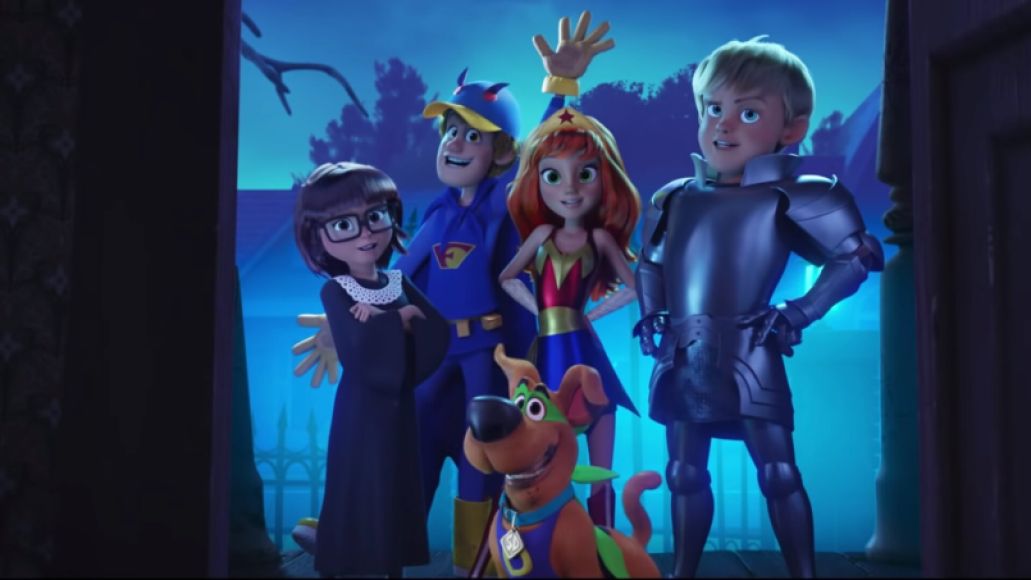 Much has been made about the voice cast of Scoob!, and rightfully so. The voice cast currently occupying the DTV Scooby-Doo films (which includes Matthew Lillard, who has been voicing Shaggy since 2010) has been eschewed in favor of a brand new (and more famous) set of voice actors. No one in particular stands out, but it’s hard to tell if that’s the fault of the cast or the characters’ reduced screen time.

As for the non-Scooby-Doo characters, they stand out more so than our protagonists. Hell, Wahlberg’s Blue Falcon steals the whole damn movie, and that’s not something you want to say about a movie that isn’t titled Dynomutt, Dog Wonder. Jason Issacs is having a ball hamming things up as Dick Dastardly, though he and his army of robots are made into rip-offs of Gru and his wacky Minions from the Despicable Me films.

Fearing for Your Kids at Home? A Parent’s Guide to Releasing Your Anxieties with Horror Movies

Mystery Solved: It’s difficult to write this review, because Scoob! isn’t the movie that I wanted Mystery Inc.’s return to the big screen to be. If you’re able to ignore the franchise’s 50-year history, you’re probably going to have a blast. After all, Scoob! is a fun, colorful, and funny movie that not only sends several great messages to younger viewers, but also proves to be highly entertaining for adults.

One just can’t help but yearn for the classic approach of a good ol’ fashioned mystery involving a man in a mask (or malevolent cat creatures on an island full of zombies). But perhaps it’s time that us Scooby-heads let the Scooby-Doo we know and love go. It’s time for this version of Scooby-Doo to earn its place in the hearts of this generation’s children.

Where’s It Playing? Scoob! is barking in a living room near you.

Scoob! Is The Avengers of Hanna-Barbera Movies: Review