It looks like the Dark Side has finally sunk its teeth into Luke Skywalker, as Star Wars icon Mark Hamill has a guest spot on FX’s What We Do in the Shadows. News of the role first broke back in January, and now we have our first look at the actor in full vampire garb, which you can see below (via EW). Update: Hamill himself has shared a clip from the upcoming episode. Watch below.

Hamill portrays an ancient bloodsucker in an episode called “On the Run”. Turns out his character is owed a debt by Matt Berry’s Laszlo, and he’s risen to collect. For whatever reason, Laszlo isn’t able to repay his old vampire pal, so he goes into hiding.

Hamill has been a vocal fan of both the original What We Do in the Shadows movie from Jemaine Clement and Taika Waititi as well as the FX series adaptation. Speaking about getting the role, Hamill said,

“The whole cast is one of the best ensembles in television history. I would’ve been happy just visiting the set, they certainly didn’t need me to come in and mess it up somehow. But I thought I would check out the script and see what they had in mind. I expected the role to be like the next door neighbor or someone who works at the Department of Motor Vehicles. When I read I was going to play a vampire, I just about shot out of my chair. What a great honor!”

TV Review: What We Do in the Shadows Works Best as a Series

Most of Hamill’s onscreen time will be alongside Berry, whose improvisations proved to be “one of the real challenges” of playing the part. “Each line he said was more obscene and profane than the next,” Hamill said. “Mark Hamill the actor found that hilarious but my character does not. I had to work really hard to try and stay in character the best I could.”

While the role is meant to be a one-off, Hamill hasn’t ruled out a reprisal. “It was such a great experience and I feel very satisfied with having done it once. But who knows? Never say never.”

Here's your #Fangtastic1stLook at what I do in the shadows… Please join me as I meet my favorite undead family on @theshadowsfx at 10pm/E this Wednesday May 13th on @FXNetworks. 🧛🦇🧛‍♀️#NightmaresReallyDoComeTrue pic.twitter.com/L56lkIhLPB 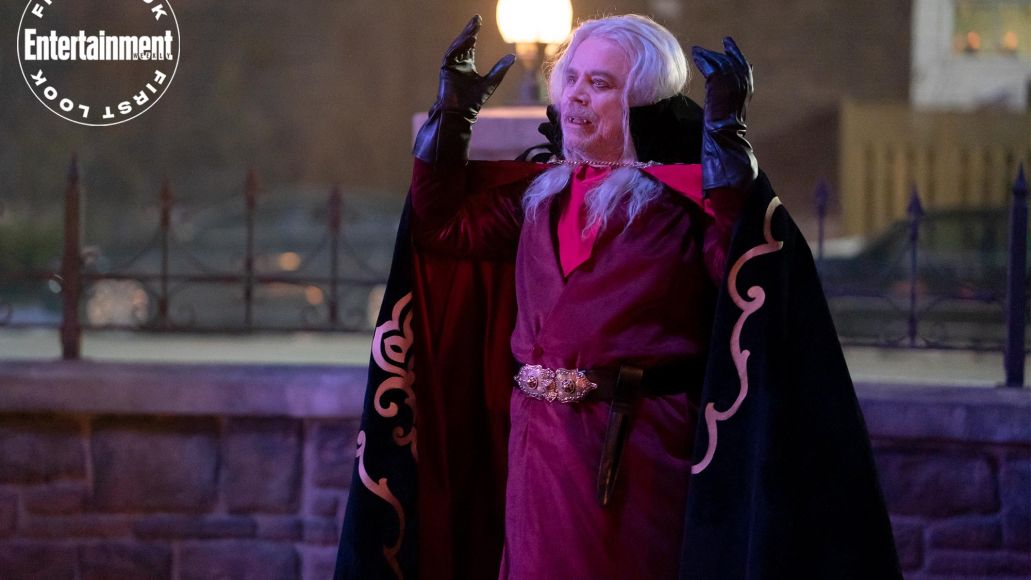 Mark Hamill in What We Do in the Shadows, photo by Russ Martin/FX