The Pitch: Five bloods, four surviving soldiers, the fall of Saigon, a hunt for gold, and the ever-lasting damage and degradation of war. Spike Lee’s Da 5 Bloods is his take on Vietnam through the eyes of African American grunts, both past and present.

Vietnam, 1971. Paul (Delroy Lindo), Eddie (Norm Lewis), Otis (Clark Peters), Melvin (Isaiah Whitlock Jr.), and Norman (Chadwick Boseman) are a battalion that finds a crate filled with Vietnamese gold. Knowing they can’t just grab it and go, the men bury the prize with the hope of coming back for it when the time is right. In the meantime, they’re fighting in a war they’re not sure they need to be a part of, questioning the dangers of this foreign land against the rioting, fires, and protests at home.

Ho Chi Minh City. Today. Paul, Eddie, Otis, and Melvin reunite to track down their spoils and the remains of their fallen brother Norman. While navigating a new world – and avoiding encroaching dangers and greedy third parties – the veterans must come to terms with their past, their resentments, their selfishness, and their sins, all while trying to get out of the increasingly vicious final mission alive. 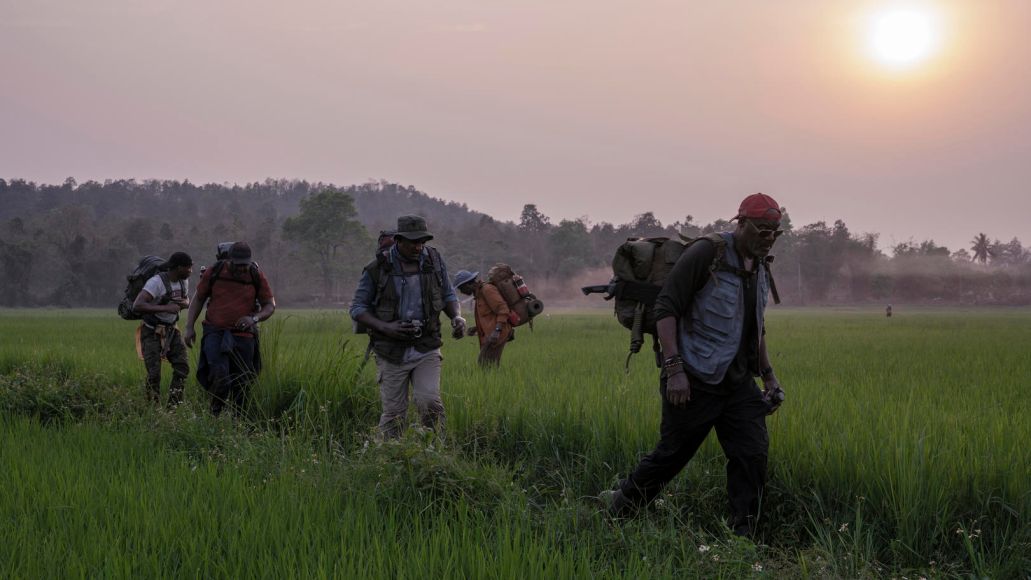 Blood and Guts and, and … Why Are We Fighting? At first, it seems stock. Vietnamese gunners on land shoot their semi-automatic rifles at a US chopper filled with black soldiers – our ostensible heroes – that are trying to bring the bullets back. The plane crashes, the men in the helicopter are left on the ground, the green fields of Vietnam provide no cover, and blood is most certainly shed. It’s a game of counting down the lives left in yet another combat scene in a war movie. But it’s just one scene, a decent one, not the best. And it works in superior fashion because you give a damn about the men onscreen, in the brush. They aren’t merely grunts waiting for their time in the movie to give speeches or be killed; they’re people.

Whereas the classic ’60s war capers boasted men as archetypes (bomb expert, rifleman, et cetera), Paul, Eddie, Otis, and Melvin are realistic men with realistic lives. Why is Paul a Trumper? Did Otis have a life left behind in Vietnam? Norman is just the Bloods’ messiah, he was a teacher, a brother, and a man at war with his himself and his home.

The war genre often risks looking like an assemblage of marching music and state-of-the-art gore. Lee sees those hallmarks, intensifies them, and even takes the time to remix. Marvin Gaye crooning that love conquers all – in superbly placed soundtracking atop many scenes – seems so obvious that you’ll feel dumb for not listening more clearly. Da 5 Bloods uses its carnage – of which there is a lot – in unglamorous fashion. Through endless shots to the gut, head, eyes, and people being blown up by landmines in gory, meaningless fashion, Lee begs the question, “Why?” Must the killing go on? Must cruelty continue?

This is an anti-war film about violence begetting violence, the burdens we carry, what happens when the grief of those burdens explodes, and how we struggle to leave struggle itself behind. This is his ‘60s period epic, his war thriller, and a battle cry for the unsung and ill-affected. The lessons of Vietnam, of the civil rights movement, of the so-called Boomer generation’s life and times, do endure. Kent State, Lyndon Johnson, the death of Martin Luther King Jr. in Tennessee. What have we learned? Da 5 Bloods brutally suggests we haven’t learned enough, and that when people struggle to learn … they get angry.

“Don’t let nobody use our rage against us.” So it goes from the mouth of “Stormin’” Norman.

It also expressively tells a story about black life during and after war that too often goes untold. Like Kubrick’s Fear and Desire, and other revisionist war stories, Lee argues that war makes the worst of men, breeding hate, distrust, anger, and division. Those scars never heal, and for black men, the sting of exploitation and utilizing minorities in a fight they can hardly understand lasts well after peacetime arrives.

Spike Lee has a way of repurposing genre tropes into explorations of race, politics, and Americana. BlackKklansman wasn’t just an homage or a crime thriller, but a needed acknowledgement of systemic racism. Mo’ Better Blues isn’t just a jazz flick, but an ode to black creativity. Think He Got Game isn’t an indictment of white sports fandom? Lee flips the genre where applicable in satisfying fashion. In presenting Da 5 Bloods, Lee takes a crack at the Credence Clearwater Revival nostalgia trips and geriatric last rides of so many modern war movies, instead yielding something better: a cinematic ceasefire. 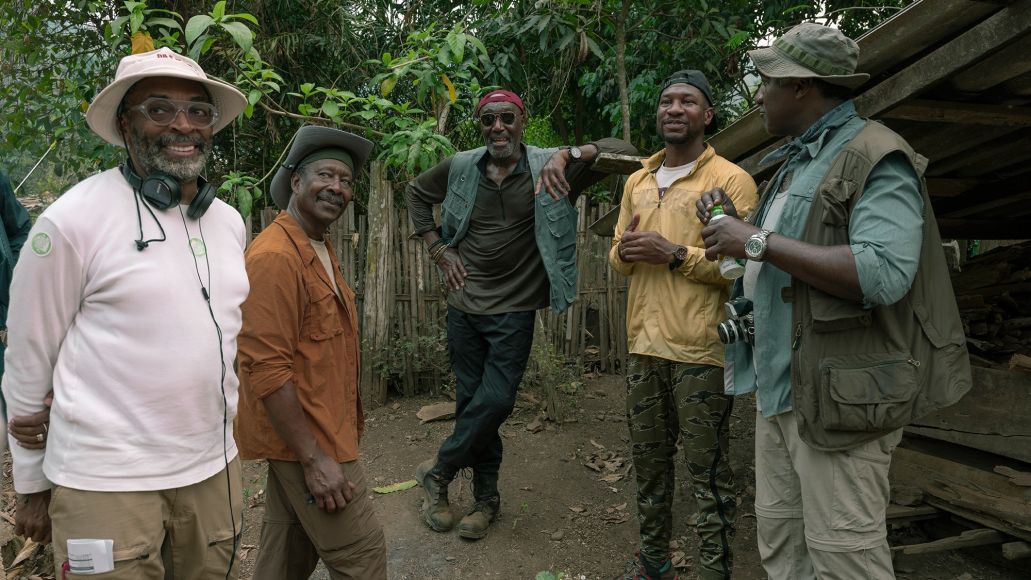 Squad Goals: The gold hunt is a mere outline for a series of illuminating side missions, and Lee handles the proceedings the way he knows best: through characters, and his style.

A Vietnamese radio host asks deeply salient questions of her black American male listeners, trying to sow the seeds of discord among troops. But the questions of what they’re fighting for make a whole hell of a lot of sense, especially when paired with Gaye’s “Inner City Blues (Makes Me Wanna Holler)”. A trip down the river set to Wagner’s “Ride of the Valkyries” is so clichéd it makes for a perfect laugh. And Lee’s penchant for good camerawork – richly saturated 4:3 from Newton Thomas Sigel here – gives the film a mournful vibe. Composer Terence Blanchard yet again comes with a big brass section, offering marching music that’s both inspiring and embarrassing (always in the right key, of course). Even if the film’s momentum takes time to build in the early minutes, Lee makes interesting choices to keep you hanging on until the heartrending close.

His Bloods are guys you want to hear more about. At present, Delroy Lindo’s Paul is a MAGA type, sporting the red cap and a Punisher-style skull shirt  while being mocked by his team. But he’s no mere putdown, instead pitched as a considered exploration of veteran psyches, PTSD, and how and why people become nationalists after fighting around the world. Chadwick Boseman, in what almost feels like an effort to demystify his A-list action star status, is explored only in flashbacks, the film’s reminder of how many black lives have been cut short by bullshit battle. 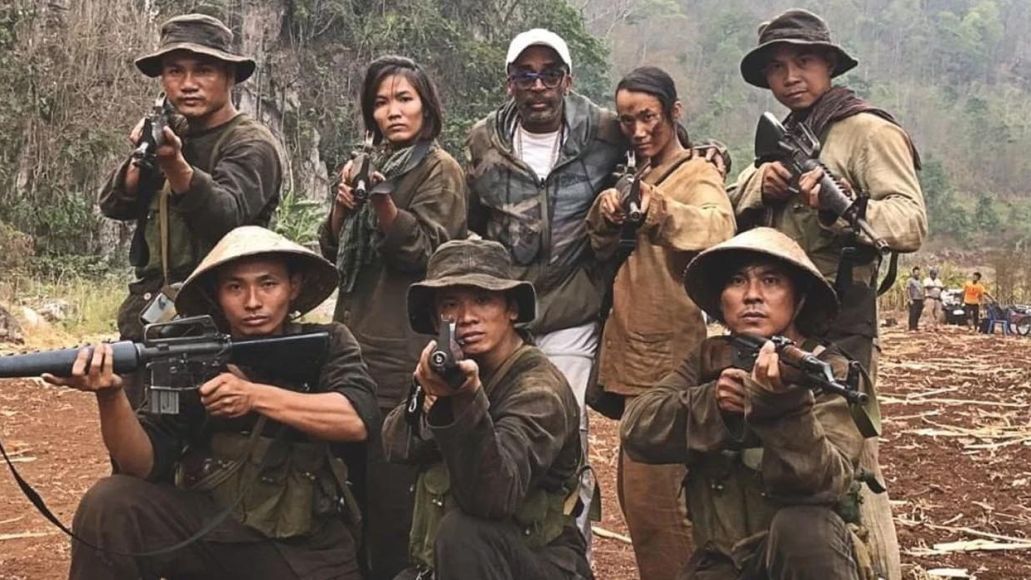 Winning the War, Not the Battle: Lee’s 2008 war feature Miracle at St. Anna had the exhaustive reach of a project with too much to say — like a director with a project so rare that he felt he needed to pack it to the gills with everything he could. Because of this, the film was breathtaking, and exhausting, and often amorphous at best. But here, with Da 5 Bloods, Lee returns to war with a project that synthesizes his better instincts in a more coalesced way.

The film starts like a hangout, turns into an odyssey, and resolves in a brutal act of bloodshed. But, in spite of rickety beginnings, the pivots work. Yes, the splicing of stock news footage and current neon Ho Chi Minh requires a little focus and effort, but hang on to the Bloods and their stories. The characters are so strong, and the parallel editing becomes so mindful, that Da 5 Bloods ending as bluntly as it does is only fitting. And the parting sensation hurts. The grief is felt, and Lee makes points deeper than the standard maxim of it simply being hell. War lasts. It haunts. It festers and contorts the soul. But maybe, just maybe, there’s still time to learn and do better.

Spike Lee on Voting: “This 2020 Presidential Election Will Be the Fight for the Soul of America”

The Verdict: Are the action scenes, remembrances, speeches, plot revelations, and other asides intriguing? Quite often. And is this a good anti-war film? No doubt. The slow build of Da 5 Bloods leads to as powerful a finale as any you’ll find in Lee’s arsenal. And it’s one that should hit rather hard as it arrives in the middle of a summer where race will be discussed at volumes. For that reason alone, Da 5 Bloods offers up a prescient fight amidst the ensuing battle for justice and equality.