The family of Tom Petty has issued a cease and desist to Donald Trump over the unauthorized usage of Petty’s song “I Won’t Back Down” during a rally in Tulsa, Oklahoma on Saturday.

Trump took the stage as “I Won’t Back Down” played over the speakers. According to a statement released by Petty’s family, “Trump was in no way authorized to use this song to further a campaign that leaves too many Americans and common sense behind.”

“Both the late Tom Petty and his family firmly stand against racism and discrimination of any kind,” the statement continued. “Tom Petty would never want a song of his used for a campaign of hate. He liked to bring people together.”

The family said it was issuing a cease and desist notice to Trump’s campaign. “We would hate for fans that are marginalized by the administration to think we were complicit in this usage,” the statement concluded.

Read the full statement below.

Trump and his campaign have a long history of playing songs without permission. In the past, Rihanna, The Rolling Stones, R.E.M., and Prince’s estate have all been forced to issue cease and desist notices. Unfortunately, such actions only do so much, as Axl Rose previously explained. “Unfortunately the Trump campaign is using loopholes in the various venues’ blanket performance licenses which were not intended for such craven political purposes, without the songwriters’ consent.”

Fortunately for Petty’s family, there was hardly anyone at tonight’s rally to hear the song being played. 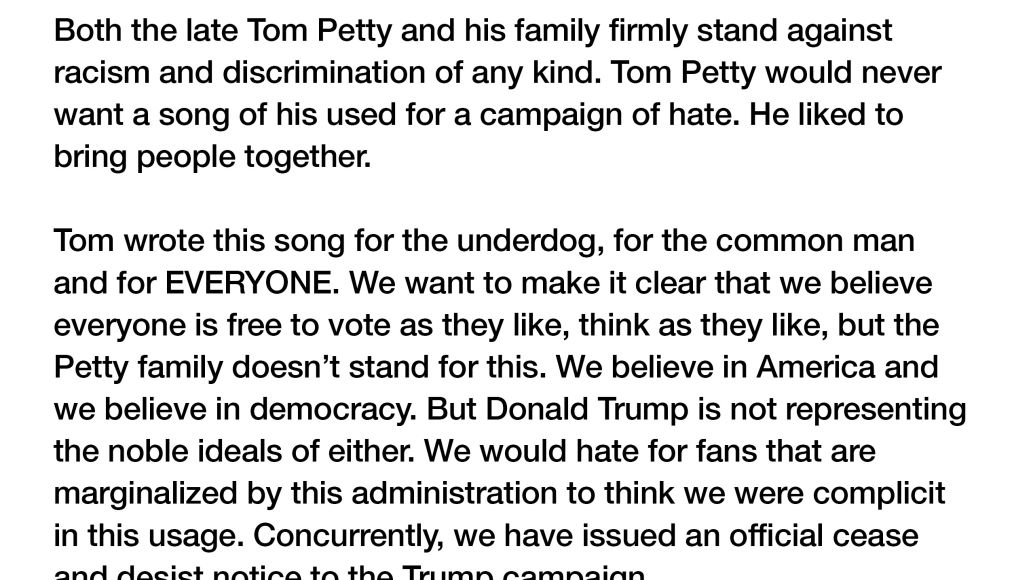