The Groundhog Day Effect is certainly a hell we can all relate to amidst this pandemic. You wake up to the same routine, the same activities, and the same limitations — all with no end in sight. But, what if we didn’t want to leave? That’s essentially the conceit of Hulu’s hilarious new comedy Palm Springs starring Andy Samberg and Cristin Milioti.

Directed by Max Barbakow and written by screenwriter Andy Siara (formerly of The Henry Clay People), Palm Springs reminds us that, now more than ever, we need to focus on what makes us happy. What if you could live without the fear of consequences? What if we could just be in The Moment? And what if chaos afforded us such an opportunity?

Consequence of Sound recently spoke to Samberg, Barbakow, and Siara about these concepts, the perceived challenges of making a first film, finding the right soundtrack for the film, how Joanna Newsom is responsible for the final song, and how they felt after the record-breaking Sundance purchase. Read below and stream the film on Hulu.

On How the Idea Came Together 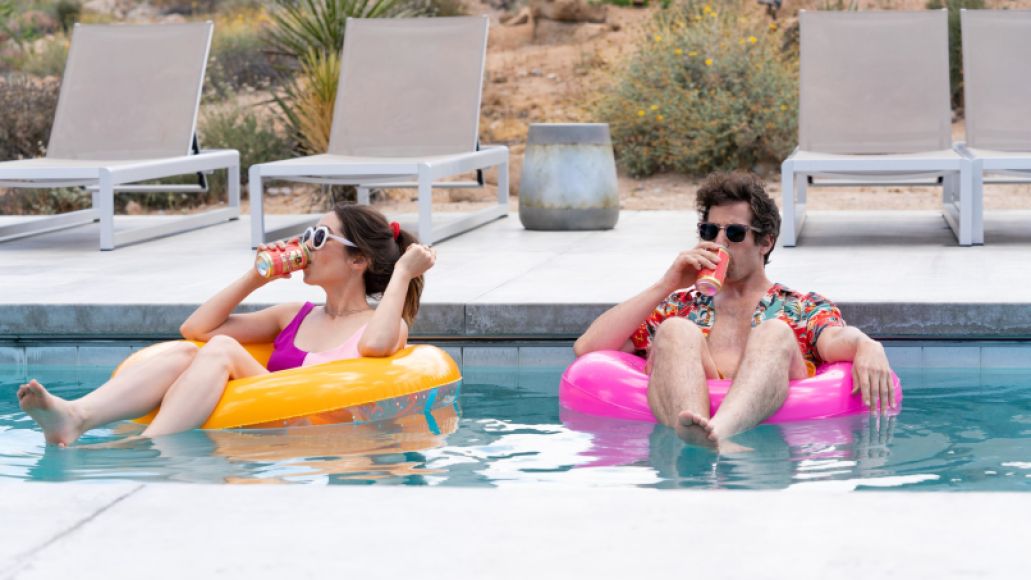 SIARA: Max and I did a couple of shorts together at AFI, and then when we finished up at AFI, and we were like, “Let’s do our first movie together.” So he and I went out to Palm Springs, had a little bit of our own lost weekend, and out of that we were like, “Alright, what’s a small movie we can do? We don’t really know what it’s about, but let’s set it in Palm Springs, maybe around one location.” Then we had the idea of this character Niles — that’s what we left the weekend with — and that was five years ago.

We just built this story around Niles. Honestly, the first version of this movie was more of like Leaving Last Vegas, where this guy goes out to Palm Springs to essentially kill himself. And then it just evolved over the years for a variety of reasons. I got married, fell in love, and started a family, and a lot of it is kind of about that. And Max went through shit. But it was always, from the beginning, me and Max as kind of acting as each other’s therapists and entertaining each other and trying to make each other laugh.

And the rest is history. 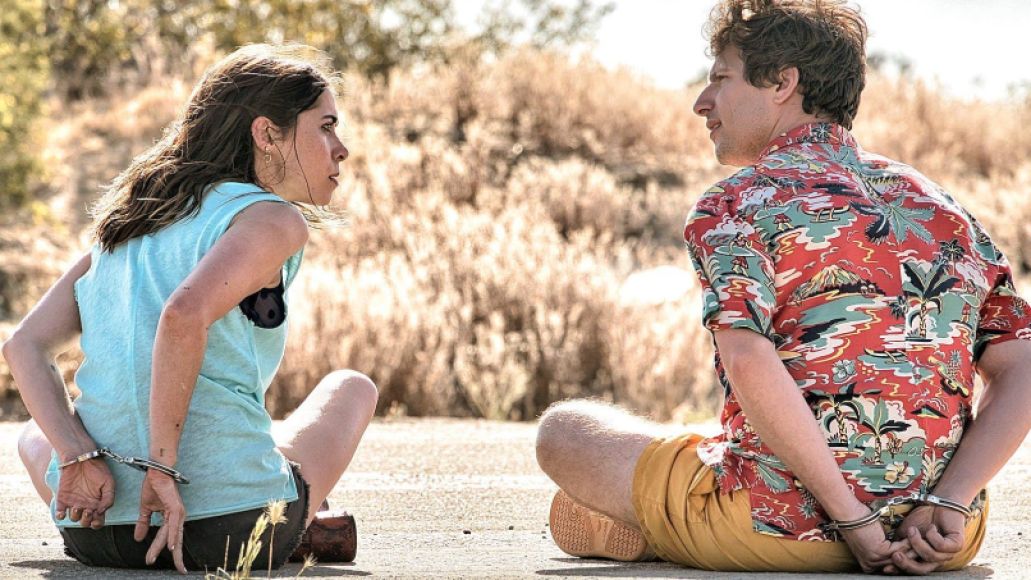 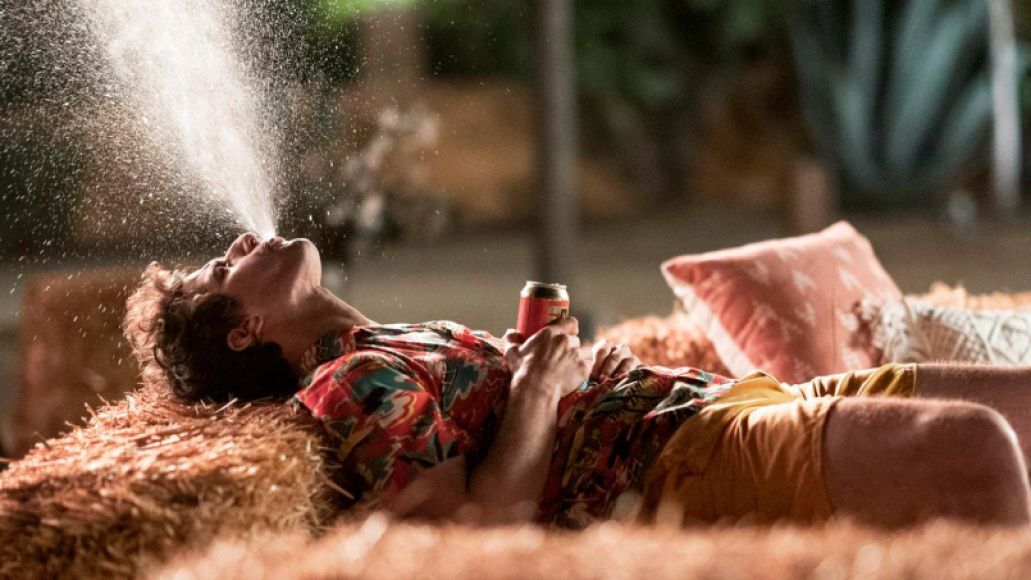 SAMBERG: I had been told only a little bit about the premise — basically the logline. I was probably 30 pages into it and I turned to my wife and I was like, “I think I want to do this movie.” It just was making me laugh. I’m such a dead-inside comedian — I just want to laugh — and it just had its own voice, its own tone, its own opinion, and it was working. It was smart and it wasn’t talking down to the audience. It was unraveling in a way that was a little confusing, which I found exciting because it wasn’t spoon-feeding you. All the things that I like when I’m watching something were in there. So, I blew threw it and was just immediately like, “Yeah, let’s meet those guys. Let’s talk about it. It would be awesome.”

On Creating an Ambitious First Film 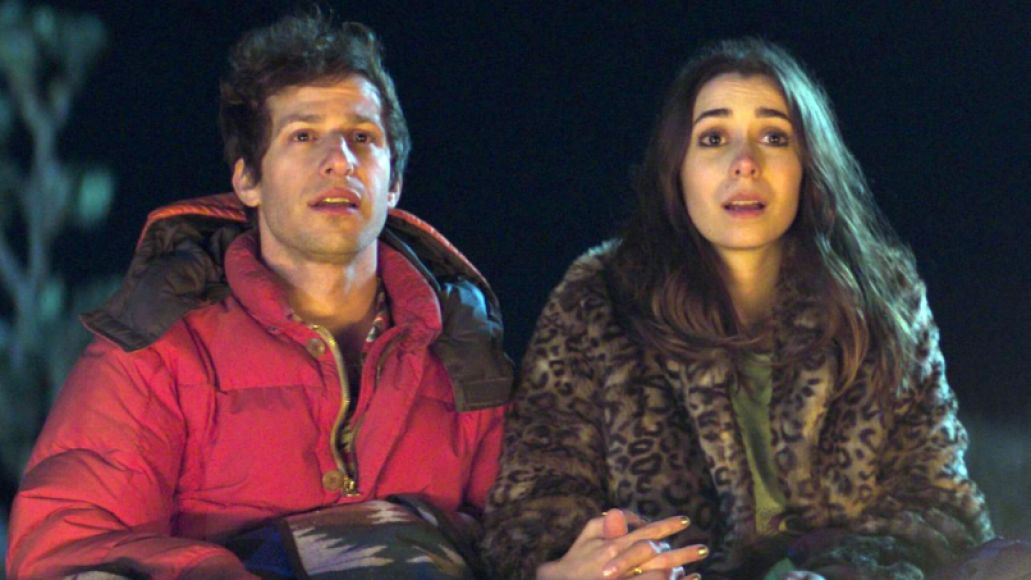 BARBAKOW: Yeah, we’re just not that smart if you’re thinking practically. [Laughs.] Coming out of AFI, we wanted to rediscover our instincts and do something that felt really true to ourselves tonally. And I think that’s why you get all these insane things in this movie, because it started as an exercise of throwing stuff that we wanted to see in a film against a wall. Then it kept ballooning, and we tried not to think about it too much along the way. But, we also wanted to tell a very human story within an insane, nihilistic world. And luckily, we had partners like Andy and The Lonely Island, who saw the same exact film and saw why it could be cool and protected. Otherwise, it could’ve gotten diluted.

On Working with a First-Time Writer and Director 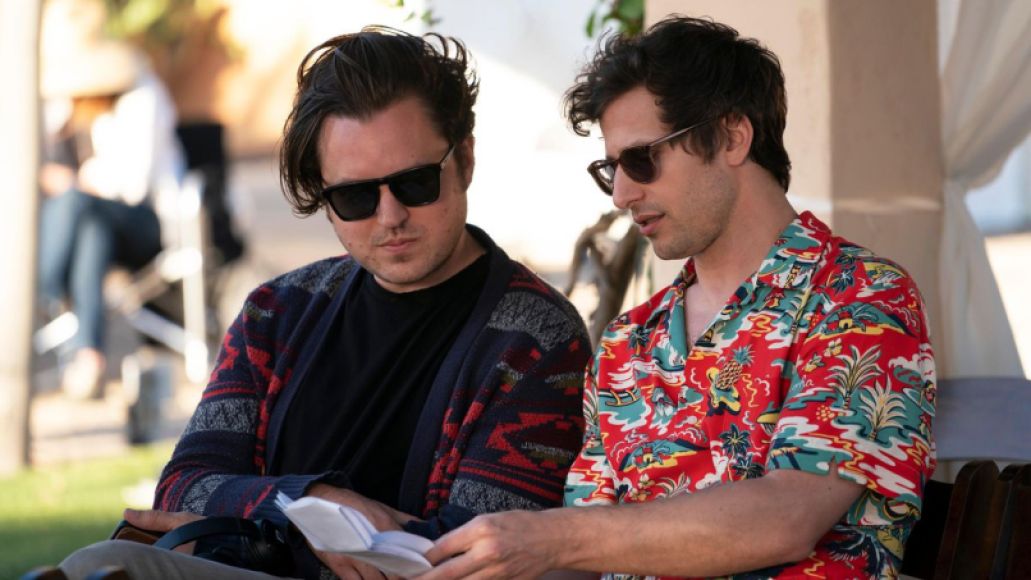 SAMBERG: Well, Hot Rod was with a studio, so it was much more comfortable of a shoot. But I will say, you know, part of what appealed to us when [Palm Springs] came through the door was them saying, “We’re doing it together. We’re friends.” We connected with that. Me, Kiv [Akiva Schaffer], and Jorm [Jorma Taccone] were like, “We’re not the break up the friends guys. We’re the keep the friends together guys.” [Laughs.] It’s true. There’s something intangible about that in life, and in creative endeavors. It just makes it have a little extra something. And, of course, that turned out to be the case. And it makes working with people a lot nicer, too, because there’s a comfort there. 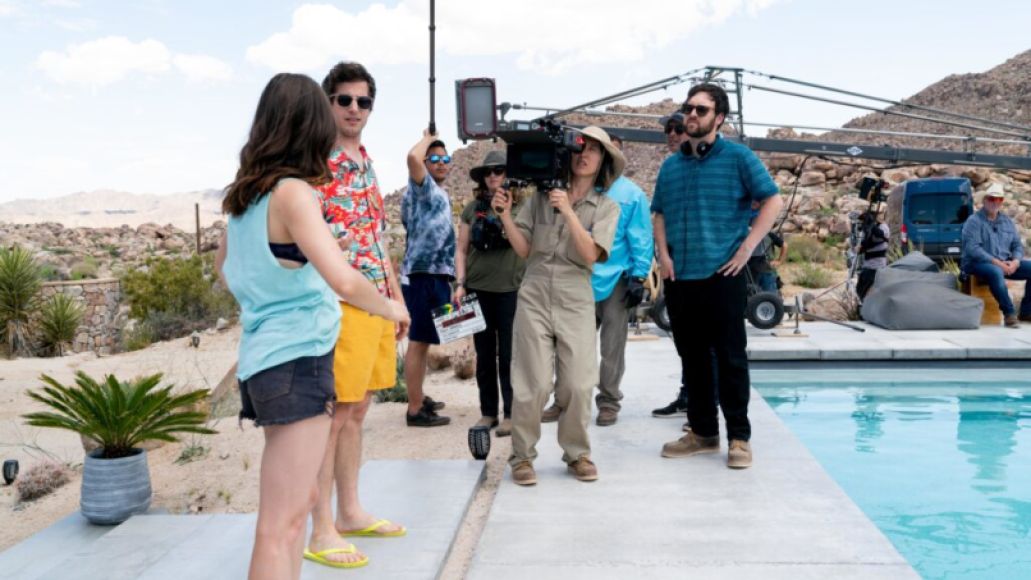 SAMBERG: There was a lot of block shooting, which is to say that anything in the same location we shot it all at once. That could’ve been over the course of multiple days, and Max could tell you a little more about how we strategized that. But, I mean, it’s not ideal. [Laughs.] But, at the same time, time in the movie is kind of relative anyway. So, there’s a soupiness to it that, outside of wanting to make sure that you’re hitting the right emotions as a performer and tonally from the point of view from the director, you’re getting what you need from that moment story structure wise. It’s also like, “Alright, let’s just check this list off. Let’s just get everything we need. Hope this music we put under it makes it good.”

BARBAKOW: Yeah, we always had the soundtrack to fall back on, so that we could just mute everything that we actually got and it could just play as an extended music doc. [Laughs.] The block shooting, honestly, I thought was one of the more fun parts, especially how I think Andy you like to work, too. Doing a lot of series and jumping in and out and just knocking a lot of stuff out. And we’ve gotten questions like, “Was it hard to keep track of your spot in the movie? Was continuity hard?” And I was just thinking about how everybody really took ownership over this fun idea, over this puzzle that we were trying to figure out.

We would always remind each other of where we were, but everybody was so on top of it emotionally that it was more about making our days because we have so much ambitious, fun, amazing stuff to fit in. It was really a matter of doing less takes for a lot of things. But we got everything we needed and everybody really dug in. It was like climbing up that proverbial crazy mountain to get what we needed every day — and we got it.

On Creating the Soundtrack 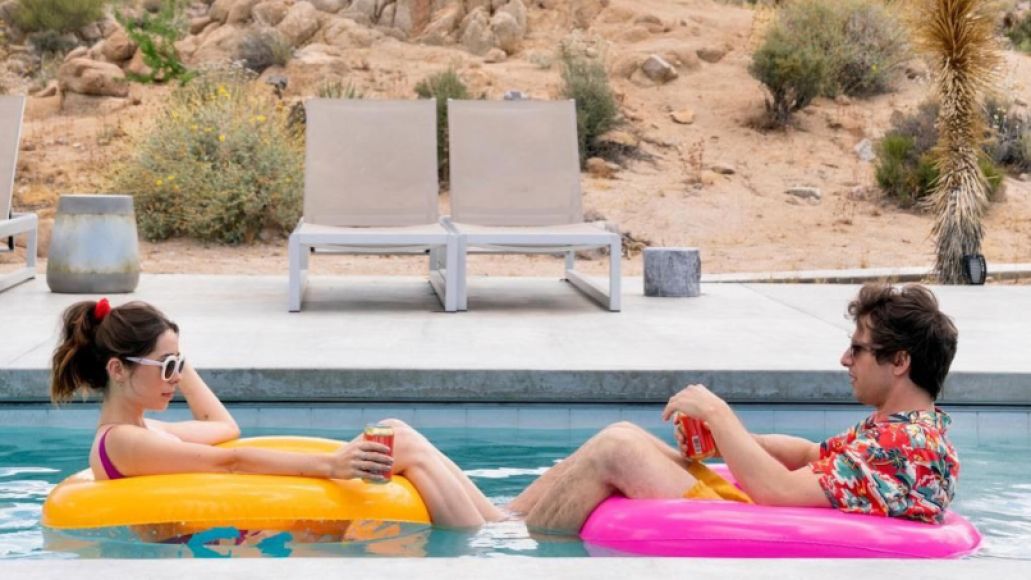 SAMBERG: It was all three of us.

SIARA: I made a playlist back when I was writing it the first time, and Max and I were just adding to it. There are a lot of songs that didn’t end up making it in, but they ended up creating this sound of the movie that still ended up translating to the page. Like “Spinning Away”, the John Cale/Brian Eno song. For some reason, when I heard that song, and I was thinking about the movie — everything started clicking into place. That was a jumping-off point.

From that point on, there were a couple of Gram Parsons songs that were written into the script. Only one song made it into the movie, but it still established that sound for the bar, for example. But I remember in our first meeting with Andy, he had said, “I have the perfect song for when they walk into the cave. It’s ‘Cloudbusting’.” And that was also one of those nice aligning points where we were just like, “This is going to be so much more fun than we thought it could be.”

SAMBERG: It’s miraculous that we cleared it.

BARBAKOW: Yeah, the idea that we could get a song like that into the movie and have it clear … it’s just like, “Yes!”

SAMBERG: I wrote a letter. No big deal. [Laughs.] One interesting note for Consequence of Sound is that the one song that wasn’t one our ideas is Hall and Oates at the very end. When my wife, Joanna Newsom, read the script, she said, “Do you know that song ‘When the Morning Comes’ by Hall and Oates?” And I was like, “No, I haven’t heard that one.” And I love Hall and Oates. So, she played it for me and I was like, “Holy shit.”

I immediately texted it to these guys and said, “This is our end credits song,” and they were like, “Woah. It’s really good!” And the album it’s from, Abandoned Luncheonette, could have easily just been the soundtrack. It’s so trippy — from the cover art to the mention of a person named Sara multiple times throughout. There’s a lot of weird connectivity between that record and the movie.

SAMBERG: We talked about it. I think, outside of obviously Sonny and Cher, to have Russian Doll come out so recently and for them to have chosen such a perfect, iconic song for theirs, it felt very fresh in our minds. Regardless of what we thought anyone else would think, it just felt like — as viewers of our own movie — we were like, “Let’s see if we could avoid using that same mechanism because they did it so well.”

BARBAKOW: The movie has its feet in multiple genres and tonalities and feelings. So, we stayed away from anything too contemporary sound-wise. But other than that, it dances around a lot, which I really enjoy. It’s bold, but it really feels rooted in kind of the emotional moments the characters are experiencing. And then just that idea where you could have the needle drop and sit back and just watch.

On Music They Couldn’t Secure 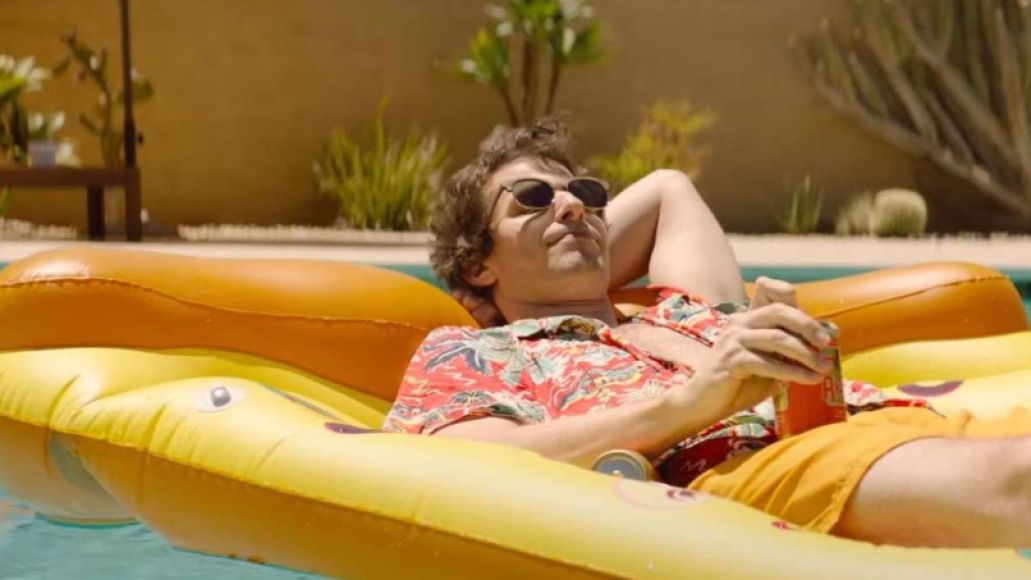 BARBAKOW: There was the Byrds song that we couldn’t do. “100 Years From Now”. We were not able to [get that song].

SAMBERG: That’s what it was. I think, outside of that, we managed to get it all, which is just super crazy. Oh, at one point we had a Fleetwood Mac song in, but it came back so expensive that we bailed.

BARBAKOW: I would say with that, what we have in is better anyway. For the moment. Fleetwood Mac rules, but it creates a little mico-music story, too. I feel like there’s a callback, song-to-song.

SIARA: And that one John Cale/Brian Eno song did not get in because it didn’t fit, but “Spinning Away” was still important for my feeling of the movie from that early, early draft, it was nice to have that John Cale song [“You Know More Than I Know”] be a centerpiece.

SAMBERG: For sure. And we already had one in there, so we just added another. It’s definitely spiritually connected to that inspiration.

On Breaking Records at Sundance

SAMBERG: Yes, it was surprising. [Laughs.] I mean, we went into it having that hypothetical “Man, what do you hope happens?” And it was like “It’d be nice if we sold it for what we spent?” [Laughs.]

BARBAKOW: “Or people like it. And don’t hate us afterwards!”

SAMBERG: It outpaced our expectations by so much on every front. It was incredible.