The Pitch: The hottest ticket on Broadway has arrived on Disney+, a filmed version of the musical phenomenon Hamilton featuring the original cast. Can the massively popular show survive the translation from the stage to the small screen?

My Shot: Hamilton is a time capsule, in more ways than one. The show first became a mammoth hit, beyond most any Broadway show, in the final days of the Obama administration. Even though (or perhaps because) getting tickets required Herculean effort, luck, or celebrity, Hamilton became a social media sensation thanks to its memorable songs, its multicultural cast, and the effervescent charisma of its star and writer, Lin-Manuel Miranda. In the final days before its original cast departed, during the Summer of 2016, they filmed the show and held on to it in the hopes of eventually selling it to a studio that was, if not young, then at least scrappy and hungry.

Enter Disney. Just as the show may feel like a time capsule of a pre-Trump era, so too are the plans for what the #Hamilfilm would look like. When Disney announced its acquisition of Hamilton in February of this year (yes, really — just five months ago), the plan was to release it into theaters in Fall 2021, more than five years after it had been filmed. But then, a pandemic arrived and upended all of our plans, And so, a film purported to bring together elements of live theater, film, and streaming is here now, in the months leading up to another presidential election.

For the uninitiated, there should be no beating around the bush: This version of Hamilton is as close as any of us are ever going to get to seeing the Broadway show in its initial glory. Even if you were fortunate enough to see a performance in its first run, you’re seeing it in a different light now; director Thomas Kail largely films the show at medium range, but there are sporadic close-ups of the actors, some from the back of the stage, ensuring that we’re all seeing things as uniquely as possible. At the same time, let’s not give into PR-speak: this is a filmed version of a Broadway show. 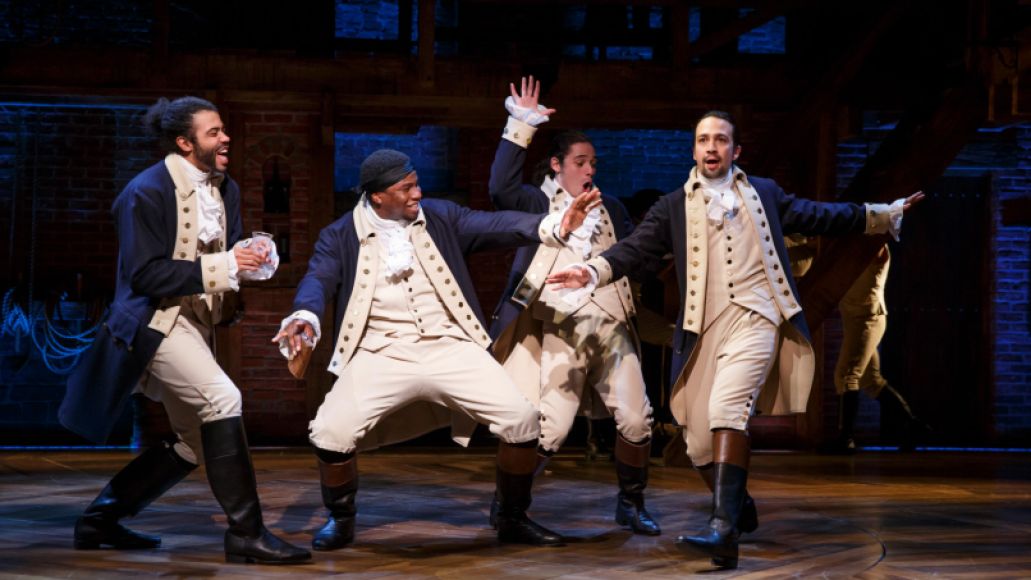 Who Tells Your Story: Fortunately, this is a filmed version of one of the greatest Broadway shows in history, depicting the early history of the United States from the perspective of one of its less-championed architects, with a musical mix of rap, R&B, and showtunes performed by a cast largely populated with actors of color. Kail is judicious when he employs close-ups of his actors, but even when he doesn’t, there’s really no need. Miranda and the rest of the cast he helped assemble is massively talented, their charm and capabilities all but leaping off the screen. Though Hamilton is, at best, a tortured heroic figure — his cuckolding of another man in the second act arguably makes this the least “Disney”-friendly film on Disney+ — he’s not quite the most fascinating character in the musical ostensibly all about him.

There’s Aaron Burr (Leslie Odom, Jr.), the shamelessly ambitious soldier-turned-politician who greets Hamilton in 1776 by encouraging him to “talk less…smile more”. Burr’s hidden depths of avarice, coupled with his insistence on protecting his daughter, is brought to life with such complexity by Odom, Jr. that he often blows the other actors off the stage with his vocal power. There’s Thomas Jefferson (one of two roles portrayed by the inimitable Daveed Diggs), portrayed here as a snobby American who butts heads with Hamilton on more than one occasion. (Diggs also plays “America’s favorite fighting Frenchman”, the Marquis de Lafayette, laying down an enormously fast-paced rap or two in the process.)

Or there are the Schuyler sisters who Alexander loved — his wife Eliza (Phillippa Soo) and his sister-in-law Angelica (Renee Elise Goldsberry). Both Soo and Goldsberry are in possession of powerhouse singing voices, dazzling with numbers like “Helpless” and “Satisfied”. Soo also gets to take the lead on the final song of the entire show, “Who Lives, Who Dies, Who Tells Your Story”, closing the story with a triumph of fully earned emotion.

The Room Where It Happens: When Hamilton first began its arc as one of the biggest phenoms in all of popular culture, the natural question was whether or not it would make the leap to the big screen, and who would helm such an adaptation. Though Kail is a gifted stage director, this film isn’t intended to replace a genuine adaptation that takes the story out into the streets. It’s not that Hamilton couldn’t benefit from a full-throated cinematic take from the right director; for now, this is enough, because the show is that much fun, the songs are that vividly composed and performed, and the emotion is still so tangible and real.

Hamilton also arrives on streaming at a particularly fraught time in our history. Whereas it once felt hopeful, coming at the tail end of the presidential administration for the first Black Commander-in-Chief, its presence now feels like an act of rebellion, arriving mere weeks after the beginning of explosive and long-overdue protests nationwide against racial injustices that have existed in our country for centuries.

The show is still arguably a little too inappropriate for Disney+ — a couple of uses of “fuck” have been censored, aside from the sexual content in the second half — but it weirdly fits in with how the company-at-large prefers an idealized version of history. Granted, Hamilton doesn’t sugarcoat its characters’ fates, but there’s still admittedly some idealization in its representation of the past from a fully modern place.

Historical weightiness aside, Hamilton is simply fun. Though it runs 160 minutes (including a minute-long intermission), the range of performances and songs, running the gamut from the gleefully crowd-pleasing Act Two opening number to the tender emotion of a song Burr and Hamilton sing jointly to their infant children, ensures that Hamilton offers something for everyone. In that way, too, it’s a perfect addition to Disney+.

Hamilton Movie on Disney Plus: How to Watch, Release Time, and Everything You Need to Know

The Verdict: We still haven’t gotten a truly cinematic adaptation of Hamilton; maybe one day, we’ll be lucky enough to receive it. For now, over the holiday weekend (and beyond), we can be entertained by this electrifying stage show in filmed form. That would be enough.

Where’s It Playing? No ticket necessary! Hamilton is streaming now on Disney+. Don’t have Disney Plus? Sign up here for $6.99 a month or just $69.99 for a year.

Disney Plus' Hamilton Movie Feels Like an Act of Rebellion for This Fourth of July: Review