The physical demands of Smith’s fast and melodic fretwork in Iron Maiden forced Jackson to outfit the signature San Dimas models with a bevy of customizations and mods. Each took into account Smith’s style of playing and even Iron Maiden’s “relentless touring regimen.” The guitar is not only customized to Smith’s technical abilities, but his lifestyle as a busy, traveling musician.

Both the SD and SDM models tout lightweight alder bodies and bolt-on maple necks, which feature a hand-rubbed urethane back finish that looks decadent and makes for fluid playability. The neck is also supported by a pair of graphite-reinforcement truss rods that “refuse to budge, no matter the environmental stress it’s exposed to,” per Jackson’s press release.

“The nice thing is I pick one of these guitars out of the box and it’s like putting on a comfortable pair of jeans,” Smith said in the release. “Right away, I am totally comfortable with it, but it has the new feature of the adjustable truss rod thumbwheel so instead of having to take the neck off, you can just adjust it, which is a great feature.”

The fretboard will delight any budding guitarist trying to learn who to play “The Number of the Beast” — and maybe make some of those more challenging licks that much easier to play. The guitars’ 22 jumbo frets and 12-inch to 16-inch compound radius fingerboard are ideal for Iron Maiden’s fast tempos, virtuosic soloing, and complex chord changes.

As for the electronics, Jackson and Smith spared no expense in honing the guitars to a tone that remains true to Maiden and Smith’s actual guitar playing. The bridge pickup is a DiMarzio Super Distortion DP100 humbucker, which is great for the heavy metal chugging and powerful mids. Elsewhere, on the middle and neck, Samarium Cobalt Noiseless Single-Coil Strat pickups bring clean Fender Stratocaster tone, offering dynamic on-stage versatility and the ability to create different moods mid-song — a Maiden staple — via a five-way blade selector switch.

Lastly, the guitars are fitted with a genuine Stratocaster headstock and Floyd Rose double-locking tremolo system, keeping the instrument in tune through concert action and multiple sets.

“I’m really sensitive about tuning,” Smith said. “I drive everyone crazy when we are recording because if it isn’t dead in tune it upsets me but with the locking trems and everything else, it sort of answered my prayers because it meant I could play a whole show with the same guitar and keep perfectly in tune.”

Watch Jackson’s video with Smith discussing his refreshed guitar models below, followed by an image of both guitars. 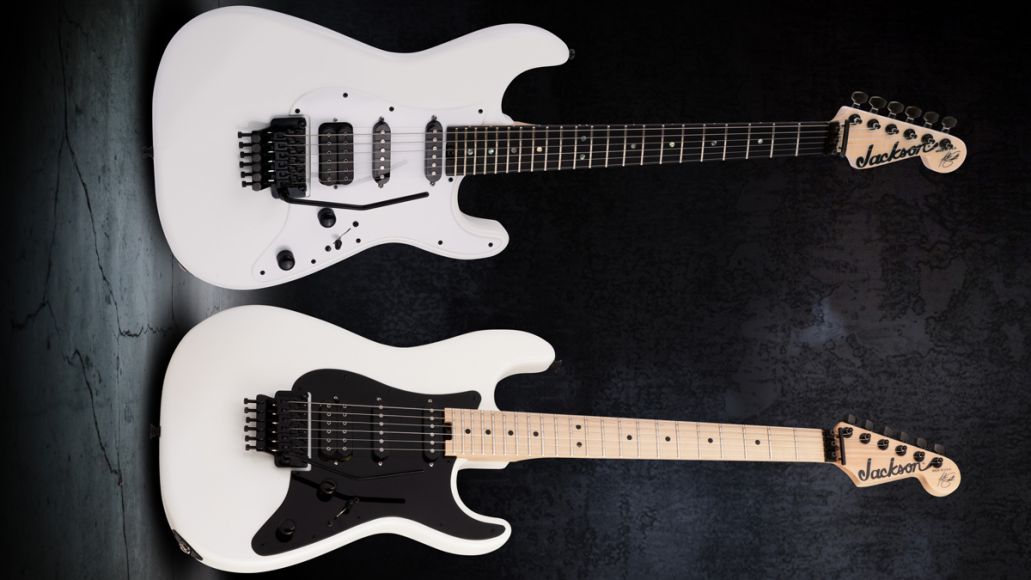