Joanna Newsom and Andy Samberg are one of the most unexpected and yet totally fitting celebrity couples of our time. So it’s only logical that their three-year-old daughter is the best of both humans, all the way down to Newsom’s musical talent — well, in time. According to a new GQ profile of Samberg, their young toddler has a miniature harp (!) of her own.

The interview takes note of Samberg’s surroundings, as every artist profile does, but these days that means a rare look at the inside of a celebrity’s house while they quarantine. “There are three harps, also mostly used by Newsom: two for mom, one toddler-sized, a gift from Newsom’s preferred harpmaker,” observed GQ writer Sam Schube. “He’s confident Baby Samberg will get around to making dick jokes sooner than later, but for now she’s taking after mom.”

“She’s not bad,” Samberg added. “She watches her mom and emulates that sometimes, and it’s the cutest fucking thing I’ve ever seen.” Check out a picture of the tiny instrument below.

But wait, there’s so many more Newsom nuggets throughout the article. The harpist regularly “mans the grill” and then spends her evenings “watching Mad Men for the first time and then making cocktails,” a la Have One on Me. The couple take quarantining so seriously, in fact, that Newsom recently cut Samberg’s hair so he could forgo a barber’s visit. Apparently she gave him “a perfect fade” using only scissors, with Samberg dubbing her “a real pro.”

This is just the latest of Newsom’s raw talent. During an interview with Consequence of Sound, Samberg revealed she also saved his new movie, Palm Springs, by unofficially standing in as a music supervisor. He explained:

“When my wife, Joanna Newsom, read the script, she said, ‘Do you know that song ‘When The Morning Comes’ by Hall And Oates?’ And I was like, ‘No, I haven’t heard that one.’ And I love Hall And Oates. So, she played it for me and I was like, ‘Holy shit.’ … I immediately texted it to these guys and said, ‘This is our end credits song,’ and they were like, ‘Woah. It’s really good!’”

Just before the coronavirus pandemic put an end to touring, Newsom put together another one of her iconic tours where she performed solo in a handful of cities. These days, it looks like we won’t get much else from Newsom, live shows or new music. At least having to re-spin her most recent album, 2015’s Divers, is a delightful way to pass the time. 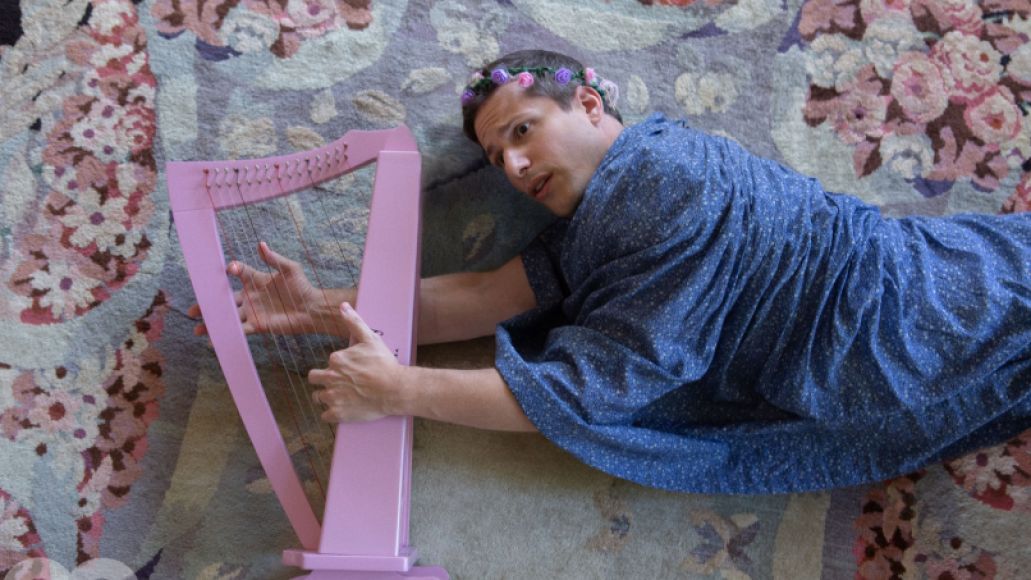 Andy Samberg and the baby harp, photo by Annabel Mehran