Blockbuster Month is celebrating the true titans of the genre. All month long, you’ll read through a variety of features digging deep into the greatest hits of Hollywood, from popcorn classics to underrated gems. Today, Clint Worthington revisits a time when the theme park ride was often a part of the summer blockbuster experience.

I was never a big theme park guy. Between my disdain for crowds and heat and the high-level anxiety I get around rollercoasters, suffice to say I never actively sought them out in my early years. Then my eighth-grade school band was invited (like many bands do) to play at Walt Disney World in high school, so off we went to Orlando for a week of chaperoned magic — both there and at Universal Studios Florida. Yes, the rides were fun, the merch was overpriced (albeit desirable), and I had a lot of fun with my school friends in a new place.

But being the creature of media I was, my greatest memories were the movie-themed rides: Honey, I Shrunk the Audience, Star Tours (which I rode three times in a single day), The Great Movie Ride. More than the overarching ‘magic’ of the parks, rides like these allowed me to view up close the kind of films I grew up watching. Lines be damned, going to see Back to the Future: The Ride was the closest thing I was going to get to feeling like I was on an adventure with Doc Brown himself. Maybe it’s the blinkered lens of youth, but the ’90s does feel like the golden age for the blockbuster movie theme park ride.

Theme parks and Hollywood have long existed hand-in-hand with one another. Just look at Disneyland, which leveraged an entire studio’s worth of animated classics and brands into consumer-friendly experiences for their guests. Or Universal Studios Hollywood, whose transition into an amusement park stemmed from their long-standing tradition of offering studio tours. The Universal Studio Tour, which has operated since 1964, is one of the most iconic movie-themed ride attractions of all time, taking audiences through Psycho, Back to the Future, Jaws (complete with the shark famously popping out of the water to scare the guests) and more. 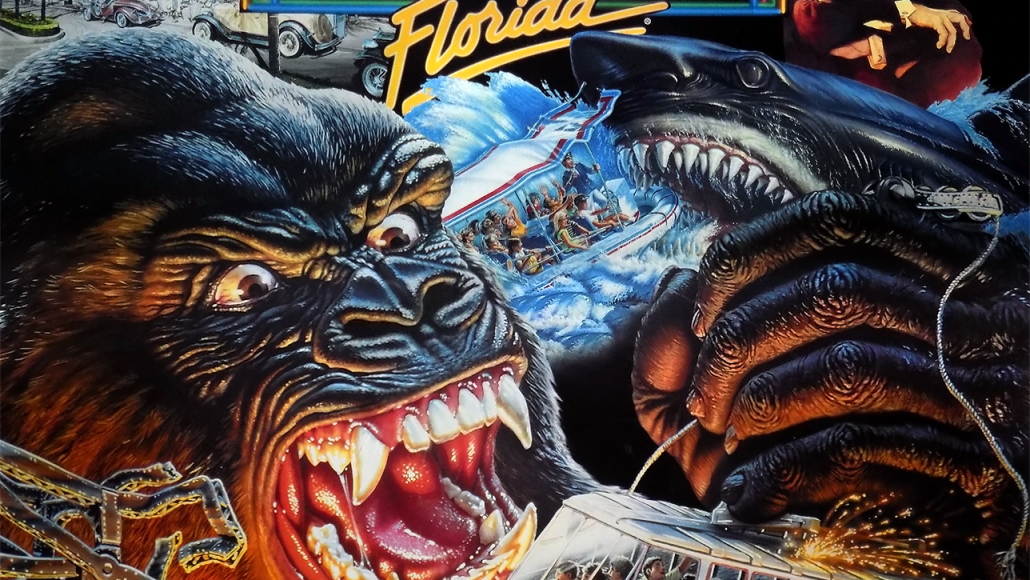 But it was in the ’80s and ’90s, with the launch of parks like Universal Studios Florida and the rise of the blockbuster, that the big-budget blockbuster tie-in ride was king. Steven Spielberg, arguably the progenitor of the modern blockbuster, saw many of his films converted into themed rides thanks to in-vogue technologies like motion simulators, 3-D stereoscopic film, and Omnimax screens to maintain the immersion of feeling like you’re “really there.” Many popular attractions maintained that veneer of giving you a behind-the-scenes look at your favorite films. Take, for instance, the storied tradition of the stunt show, which showcased the pyrotechnics and physical feats involved in some of Hollywood’s most explosive actioners — Indiana Jones, Waterworld, Police Academy of all things.

It didn’t hurt, of course, that the rides often featured brand-new footage from the stars of the film itself, which was always my favorite part. Take Back to the Future: The Ride, where Christopher Lloyd waves you into the Institute of Future Technology as “time travel volunteers,” just to get roped into an adventure to chase Biff Tannen (Tom Wilson, hamming it up as always) through the time stream in a stolen DeLorean as Doc’s only hope. Or the similar conceit of Honey, I Shrunk the Audience with Rick Moranis’ Wayne Szalinksi getting the audience shrunk down to the size of an ant. Or T-2 3-D‘s reunion of Arnold Schwarzenegger and a noticeably-older Edward Furlong for yet another James Cameron jam to stop Skynet, with the audience looking on.

(Side note: I’ve always wondered what was going through the minds of these actors when they filmed these snippets of supplementary material for something outside the scope of the art it was based on. Did they feel silly or stupid getting back into their characters for the sake of guiding an unseen scene partner through a plotless theme park ride? (If Bill Paxton and Helen Hunt’s dazed, separately-filmed snippets for Twister… Ride it Out are any indicator, the answer is often in the affirmative.)

Theme park rides have lower narrative expectations tacked onto them in favor of the short-form visceral thrill of feeling like you’re ineffably inside your favorite movie. In an era before streaming, before videotapes were readily available for on-demand revisitation, the theme park rides of the ’90s were the closest you were going to get to a sequel to your favorite movie. Fittingly, it was also an easy way for studios to maintain demand and interest for a franchise in between films without putting out a whole-ass movie. Sure, tickets were pricier, but the thing could run for years after the heat from a normal film would dissipate. Most movies leave theaters after a few weeks; the Waterworld Stunt Show is still going.

While many of those rides still exist (and have been replaced with other rides from similar brands), the trend seems to be moving away from short, live-action interactive movie rides and more into immersive, all-encompassing guest experiences. Take The Wizarding World of Harry Potter in Universal Studios Florida or Star Wars: Galaxy’s Edge. There are rides within those worlds, of course, but just as much of the appeal lies in the feeling that you can walk around in the worlds of Harry Potter or Star Wars. Star Tours lasts about 10 minutes, but wandering around on Batuu (the planet on which Galaxy’s Edge is “set”) for hours makes you feel like you’re living in the world of Star Wars.

This shift also comes amidst dramatic changes in the blockbuster landscape, particularly at a time when Big Event movies are largely falling to superhero films owned by the same two studios. That explains why Disney’s increasing buyout of everything under the sun has paved the way for things like Galaxy’s Edge or re-skinning their iconic Twilight Zone Tower of Terror experience into the MCU-themed Guardians of the Galaxy: Mission Breakout!. Today, mainstream blockbusters outside existing franchises are rare; so naturally, companies aren’t going to see them as theme park attractions as much as they are vertically-integrated branding opportunities. Besides, in a world where so many action films are slathered with CGI, what room is there for a stunt show? (Mad Max Fury Road excepted. Please, Lord, give me a Fury Road stunt show.)

One wonders if this shift towards larger, branded parks is the future for movie rides. (Of course, one also wonders if the entire enterprise may go the way of the dodo given the COVID-19 pandemic). After all, our cultural connection to media is different now: More than ever, moviegoers identify themselves with franchises and fandoms, and that deeper connection likely demands these immersive worlds as opposed to the short bursts of self-contained interactions the O.G. movie rides afforded us.

Flawed as they were, though, I’ll admittedly miss the straightforward, shaggy storytelling that went into those ’90s tie-in adventures. Sure, you can lose yourself in the halls of Hogwarts or linger in the cockpit of the Millennium Falcon as long as you like, but there’s a homespun charm to the old-school movie ride that these immersive environments can’t erase. It’s a charm that hearkens back to its origins as a means not just to lose yourself in the world of your favorite stories, but get a feeling for how they might have been made. From the stunt shows to the Universal Studios Tour, the point wasn’t to pretend you were living in those stories but to see movie magic before your very eyes — strings and all.

You can keep your sprawling, interconnected, hugely expensive fantasy-world experiences; give me a motion simulator, and a corny live-action PSA from a too-good-for-this character actor any old day.

Editor’s Note: Stay safe by picking up one of our custom face masks. A portion of the proceeds will benefit MusiCares’ COVID-19 Artist Relief fund supporting independent musicians. Get your very own dino mask below!

The '90s Were the Golden Age of the Movie Ride