Bright Eyes have returned with their first new album in nine years, Down in the Weeds Where the World Once Was. Stream it below through Apple Music or Spotify.

Conor Oberst, Mike Mogis, and Nate Walcott released nine albums from 1998 through 2011. Together they led an indie rock revolution off of Dylan-esque folk tunes, but by the time of 2011’s The People’s Key, Oberst had somewhat soured on his earlier work, calling it “rootsy Americana shit.” In retrospect, perhaps they just needed a break. Oberst especially has been busy these last nine years, pumping out solo records, founding Better Oblivion Community Center with Phoebe Bridgers, and then co-writing five songs on her outstanding new album Punisher. While Oberst helped Bridgers become a star, she’s now returning the favor in the form of renewed interest. Bright Eyes are looking brighter than they have in years, and it isn’t just rose-colored glasses — it’s the reflective glare from one of the most exciting young songwriters today.

Now reunited with the collaborators that made him famous, Oberst sounds invigorated. He said as much in an interview with Consequence of Sound, suggesting that, “Even though we all collaborate with different people all the time, I think the connection the three of us have is probably the most intimate. It feels the most like home, I’d say, after all the projects I’ve been involved with. It was nice to get that feeling back after so long.” He’s also brought some new friends onto the team; Flea of the Red Hot Chili Peppers plays bass on several songs, and Jon Theodore of Queens of the Stone Age contributes drums. The result is an hour of exciting music. In a B+ review for CoS, Gabriel Fine wrote,

“Down in the Weeds is a big album: each song feels almost cosmic, and the record itself clocks in at just under an hour. The arrangements are vast and intricate, a blend of fin-de-siècle orchestral pomp, shimmering synthetic effects, “tasteful slap bass” from none other than Flea, who features on half the album, and a bumper crop of instruments, from hammer dulcimers to bagpipes to Marxophones. The album has a sort of Arcade Fire bravura, and Bright Eyes’ willingness to play with melody, tempo, and composition is largely thrilling.”

Bright Eyes previewed the album with the singles, “Mariana Trench”, “Persona Non Grata”, “Forced Convalescence”, and “One and Done”. A recent rendition of “Mariana Trench” on Colbert marked their first live performance together in nearly a decade.

Down in the Weeds Where the World Once Was Artwork: 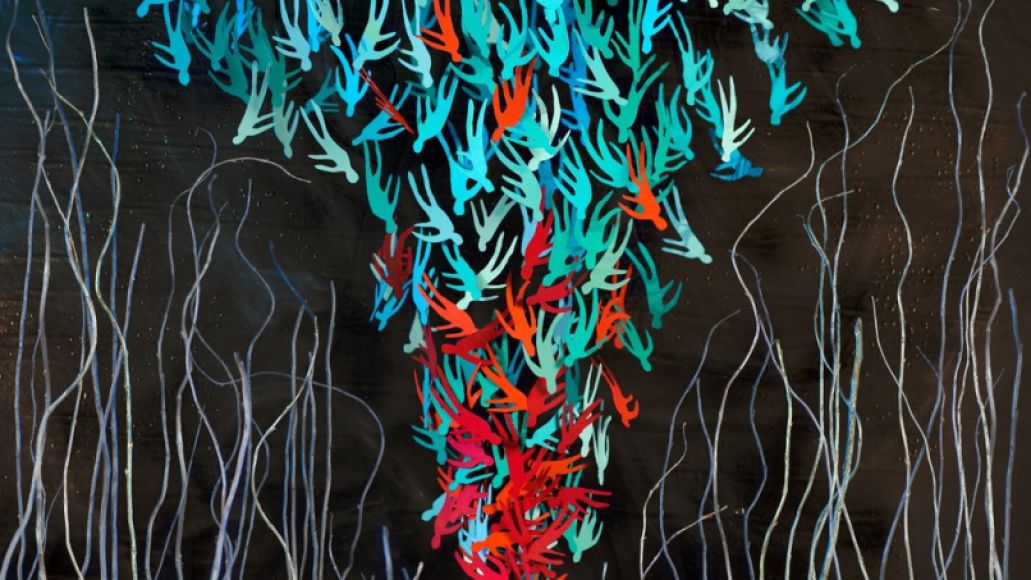 Bright Eyes Return with New Album Down in the Weeds Where the World Once Was: Stream