The Pitch: It’s been decades since William “Bill” S. Preston Esq. (Alex Winter) and Theodore “Ted” Logan (Keanu Reeves) triumphed over Hell and defeated gym-teacher-turned-terrorist Chuck De Nomolos. Sadly, the Wyld Stallyns have seen better days, and the two world renown rockers have been reduced to garage band has-beens. With their rock and roll destiny in turmoil, the entire universe begins to crumble, leaving Bill and Ted exactly 78 minutes to face the music and save the world once again.

Strange Things are Afoot: The beauty of the Bill and Ted franchise has always been its brazen imagination. It’s an ’80s slacker daydream fueled by the very slushees and sugary snacks our two heroes grab at the Circle K. Creators Chris Matheson and Ed Solomon have long been self-aware of that fact, which is why the first two films are so batshit crazy. Think back to everything that happens in both 1989’s Excellent Adventure and 1991’s Bogus Journey. What starts with time-traveling phone booths and aerobics lessons with Joan the Arc eventually leads to Battleship with the Reaper and gnome-like celestials crafting homemade robots. It’s cocaine comedy at its finest with a gooey heart at its center.

Face the Music carries on the franchise’s boisterous tradition, but it’s … a lot. We’re not kidding when we say there are at least five separate arcs going on at once. Turn to the left and there’s Bill and Ted time-traveling to meet their future selves. Look this way and their hilarious daughters Theodora “Thea” Preston (Samara Weaving) and Wilhelmina “Billie” Logan (Brigette Lundy-Paine) are going on their own journey to assemble a star-studded backing band. Turn around and The Great Leader (Holland Taylor) is ordering a high-tech android (Anthony Carrigan) to take out the two titular heroes. That’s all without mentioning the duo’s relationship woes, the countless tangents, and the multiple cameos.

You get the sense that Matheson and Solomon tried too hard to outdo themselves, but it’s easy to see why. Again, those first two films are so wildly ambitious that they truly set a bar for any potential third chapter. It also doesn’t help that Bogus Journey ends with the two saving the world and calling it a day. It essentially did the whole 22 Jump Street coda, where we actually see what happens in the future. Nevertheless, the two veterans struggle to keep it all together in Face the Music, and while the frenetic lunacy of the story was admittedly part of this series’ charm, it’s downright exhausting here. There’s just so much going on, and it’s all happening at a clip that winds up affecting the comedy.

Speaking of which, the film’s not very funny. Matheson and Solomon oscillate between so many arcs that there’s so little time for jokes. Instead, much of the humor relies on visual gags, be it Bill and Ted’s ludicrous prison bods or their deathbed equivalents or their many, many hairdos. Beyond that, the humor is a tad dry and even pedantic, which may be a testament to the two writers. After all, neither Matheson or Solomon have been knocking out the comedies as of late. Matheson is coming off of 2013’s Rapture-Palooza and Solomon last handled 2016’s Now You See Me 2. Given that this screenplay took nearly a decade to come together, it’s genuinely surprising how humorless it is.

Be Excellent to Each Other: What the film lacks in humor, Matheson and Solomon certainly make up for with heart. Without stating the obvious, Face the Music is a story about destiny, but what that ultimately leads to is a meditation on legacy and the power of unity. Those are all themes that should hit hard right now, particularly at a time when the world feels so disparate and torn to shreds — politically, spiritually, and even literally, come to think of it. It’s through these themes that Matheson and Solomon reconcile their myriad arcs: On one hand, you have two fathers coming to terms with their own failures, but on the other, you have their children reckoning with those failures as they literally follow their footsteps.

Matheson and Solomon also take the opportunity with the latter arc to comment on the reboot formula itself. From beginning to end, Weaving and Lundy-Paine essentially relive the adventures of their fathers — from gathering up historical figures a la Excellent Adventure to surviving the underworld exploits as they did in Bogus Journey. But, this isn’t exactly a condemnation on Hollywood’s need to repeat, but a more subtle and nuanced appreciation for the way the franchise has lived on through multiple generations. That notion is made all the more obvious by the film’s balmy end credits, which showcases footage of fans across the world paying homage to the Wyld Stallyns. 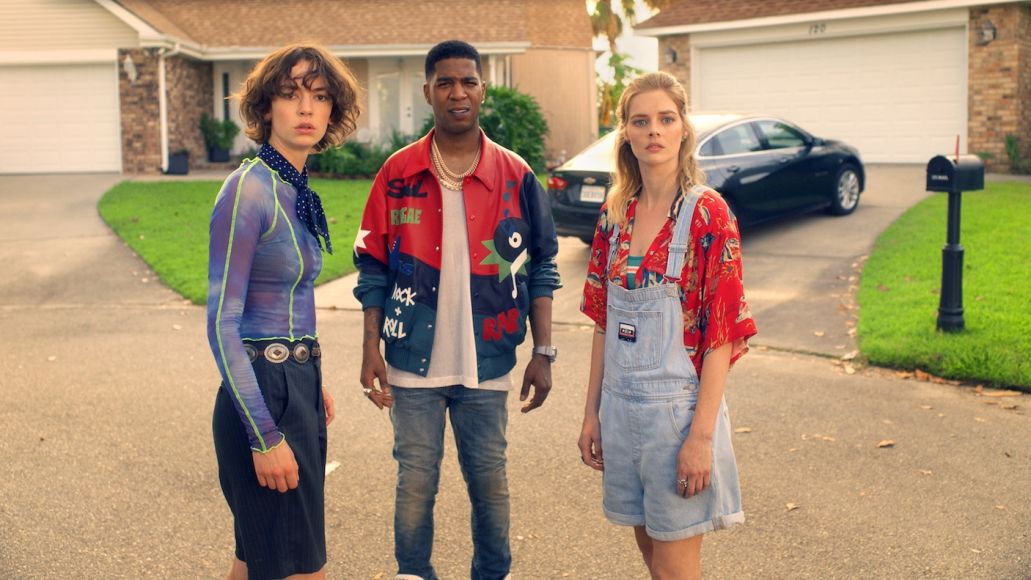 Station! With so much going on, it’s easy to forget just how many people are in Face the Music, mostly because there’s just not enough time for them to do anything. Kristen Schaal plays the daughter of Rufus to nominal effect. Holland Taylor is tasked with being a confusing anti-villain. And Carrigan gets shorted any real action. It’s a shame, but there are some supporting highlights: Kid Cudi plays himself and has a surprising penchant for extreme science. Beck Bennett brings his trademark stoic humor as Deacon Logan. And William Sadler proves yet again that the Reaper is the MVP of the series. Save for a few surprising cameos, these are all blink-and-you’ll-miss it moments, so keep your eyes open.

As expected, the real flexes come from the four principal stars. Winter seamlessly slides back into his flannel as Bill, wisely dialing things down to address the years. However, Reeves dials it down too much, coming off as nearly geriatric as he shuffles around as his buddy Ted. It’s a strange choice, especially since we know the guy can ::pulls out copies of John Wick Blu-rays and throws them around:: do everything a twentysomething can do at 55. Maybe that’s the joke? Oh well. Beyond those two, there’s Weaving and Lundy-Paine, who pepper in a number of quirks to what are mostly cheeky caricatures of their fathers. Given her recent climb, this is likely the last time we’ll see Weaving in such a minor role.

10 Years and 10 Questions with William Sadler: On Bill and Ted, Tales from the Crypt, and Never Fearing the Reaper

10 Bill & Ted Quotes You Probably Say All the Time

The Verdict: Look, at the end of the day, the fact that we’re even getting another Bill and Ted is a revelation in itself. That it’s arriving at a time when the world is ending only adds to its emotional impact. For that alone, Face the Music is worth a watch at home. It’s cute. It’s friendly. It’ll put a smile on your face. Short of that, Face the Music is little more than a gasp of nostalgia, one that’ll eventually be seen as an unnecessary coda for two classic Friday night rentals. We’ll all see it pop up on Netflix down the road, we’ll all remember a few anecdotes from this batshit crazy year, and we’ll all move on. There are worser fates.

Bill and Ted: Face the Music Brings an Excellent Reunion but a Bogus Story: Review