The Pitch: Ever wander on to YouTube, watch a few “Fail” videos, and suddenly find the algorithm inundating you with “Epic Fail” and “Expensive Fail” videos? YouTube sees your morbid curiosity for mayhem, and takes note. A day later, confident of where society seems to be heading, emboldened and in conjunction with your social media habits (a steady diet of Caucasian sociopaths refusing to wear masks), YouTube suggests more videos of people refusing to wear masks, getting into fistfights in grocery stores, and dash-cam footage of these folks trying to run people off the road with their cars. This genuinely happens to me all the time. In a way, the existence of Unhinged was algorithmically inevitable.

Unhinged is a film particularly interested in road rage. Who are these guys? What drives a man to want to run another human being off the road? Does he use unleaded or premium? The last question goes unanswered, but in Derrick Borte’s theater-bound vehicular vehicle, Russell Crowe is one such man, who decides one day that he’s just not going to play by society’s rules anymore. He hits the pedal to the metal and goes straight to Crazy Town, taking a single mother and her sons with him.

License to Survive: Given the growing belief in political polarization, and our acceleration of Andy Warhol’s 15 minutes, a road rage movie about a large, angry white man tearing up the street in his pickup seems like a movie of the week for right this minute.

Unhinged speeds things up early with an opening montage of awful DJs barking about Mondays, insane cops on the streets, and countless YouTube clips of people using their cars as weapons. It’s genuinely unnerving, unsubtly suggesting that of course … we live in a society. That is to say, Kent Brockman once asked when we should be cracking each other’s skulls open to feast on the goo inside, and Unhinged seems to think that time may be now. 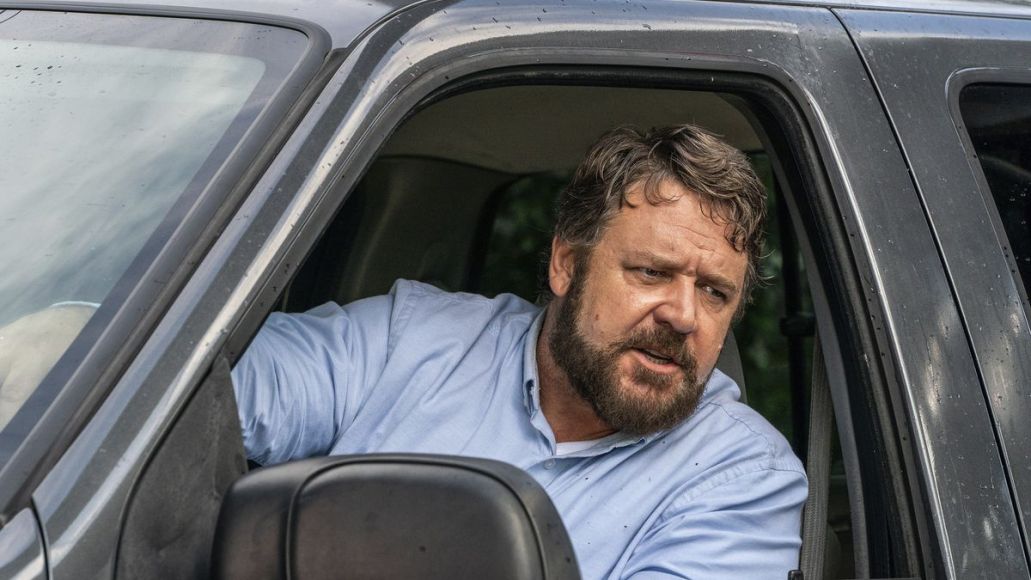 We’re fostering a generation of men – yes, all men – at odds with anyone that so much as mildly impedes on their existence. And when Crowe goes crazy, Unhinged lets the dogs out. Crowe sets people ablaze, and even stabs a man with a butter knife. He grunts, he screams, he lumbers, and he offers up horrible one-liners. When he steals his prey’s phone: “Your therapist wants to reschedule for Friday … she better bring her A-game!” Horrible. And yet, Unhinged rolls into B-movie madness with such ease that the machinery almost becomes admirable.

As a grindhouse thriller, Unhinged is of a piece with auto-mania of the past like Duel, The Hitcher, even Maximum Overdrive. The inherently surreal idea of a large metal death machine barreling down the highway, driven by mysterious forces, is a scary hook. Russell Crowe in his Ford with black grates is a colossal combo. At a zippy 90 minutes, there’s little room for plotting, characterization, or blah-blah-blah. No, Unhinged is a reasonably taught piece of escape fiction, littered with tight spots and terrifying shocks aplenty.

However, when the rubber meets the road, Unhinged struggles with its ideologically muddy statements about “the way of the world.” Trump famously said that the world is an angry place, and Unhinged seems to agree. It’s right in line with tons of Caucasian killer flicks like Falling Down or Death Wish. Violence may accidentally be excused as humor. Like, the aforementioned butter knife incident, it’s hard to read as either sick or comical. The Man’s – yes, IMDB credits Crowe as “The Man” — charge is that he’s exacting violence for divorced men and maligned men like him everywhere. Which to put it simply is very problematic. This is the kind of characterization that can be lionized by the wrong viewer, and the movie veers dangerously close to situating him as an antihero at points. He’s just kill… sorry, telling it like it is, and so forth. It’s close to dog whistling, frankly. 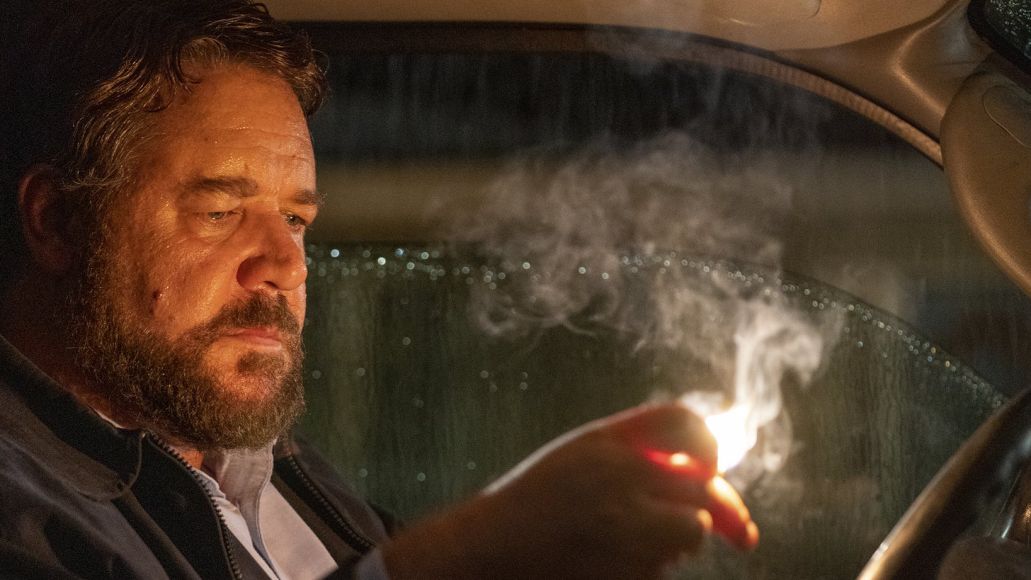 But, Crowe is credited as “The Man”. So in the best light, Unhinged is making a case that white men in positions of power are not to be trusted? That white men are who perpetrate violence in America? That they’re the one’s going out to hurt women and minorities? Yes, this already feels lazy. The point being, the nature of the beast leaves something to be desired, and perhaps the easiest read on this movie is Maniac Motorist. In the end, many roads lead to uncertainty.

Eat Crowe: You’ve seen this in a million bad dramas: The angry loner sitting in the front seat in the rain at night. Likely drunk, grumbling, fiddling with the wedding ring. About to do something stupid. And still, Crowe finds ways to make this cliché entertaining. Past 50, the Australian icon has tapped into, we’ll say, his inner Nicolas Cage. Crowe’s man sports a slightly twirled mustache, and a spotty Southern accent. He’s twitchy, he’s bug-eyed, and he’s damn believable when he knocks down a door and starts killing everyone inside. It’s like Crowe’s relishing the chance to be bad, and why shouldn’t he? Even if it’s in the service of an middle-of-the-road pseudo-slasher. Crowe adds more than the film probably desired with his psychotic presence.

Verdict: Crowe is convincing as a man on the edge, and the fear scenarios work for betteror worse. Crass but quick, and agreeably popcorn-y, Unhinged could have gone off in far more risible fashion. Not quite a gas, but without crashing and burning entirely, Unhinged gets where it needs to go and fast.

Where’s It Playing? In theaters this Friday, August 21st, but it’ll likely hit VOD in a few weeks anyway.