Turn on your TV, and you’ll likely scroll over a quirky series about a family of misfit superheroes. Not only just misfits, but troubled souls wrestling with a range of personal issues, all while they begrudgingly save the world in various capacities.

Netflix has The Umbrella Academy, which follows the adopted Hargreeves siblings, who carry their own unique strain of resentment toward their distant father figure. The CW has their Arrowverse spinoff Legends of Tomorrow, a giddy ensemble show about time-traveling metahumans who “screw things up for the better.” Amazon Prime Video is shaking up the formula with The Boys, where the titular selfish, corporatized superheroes are actually the bad guys. And then there’s Doom Patrol, which just wrapped up its second season on HBO Max (after beginning life on the tragically-overlooked DC Universe). More than these other series, Doom Patrol pins down the essential appeal of the misfit superhero show: We want to see these folks not just save the world, but save each other.

All of these shows flirt with some levels of weirdness; after all, without the success of the Marvel Cinematic Universe’s own interstellar outcasts, the Guardians of the Galaxy, we wouldn’t have this new age of irreverence in the genre. Legends operates almost like a super-powered sitcom, throwing its gang into one silly situation after another — capitalizing on fun first with pathos a distant second. (It’s what makes it such a refreshing palate cleanser from its more dour compatriots in the Arrowverse). While The Boys leans into its Garth Ennis-ness from the get-go, offering a nasty, nihilistic world where superheroes, despite their focus-tested sheen, don’t have our best interests at heart (something I’ve explored on this very website in the past). Each show has their respective considerable charms, but there’s something missing in the gumbo: The Boys is often too self-indulgently edgy; Legends is too irreverent to care about Getting Serious at all; and The Umbrella Academy waits too long to go truly strange (and it really needs to cut back on its “ironic needle-drop” budget). 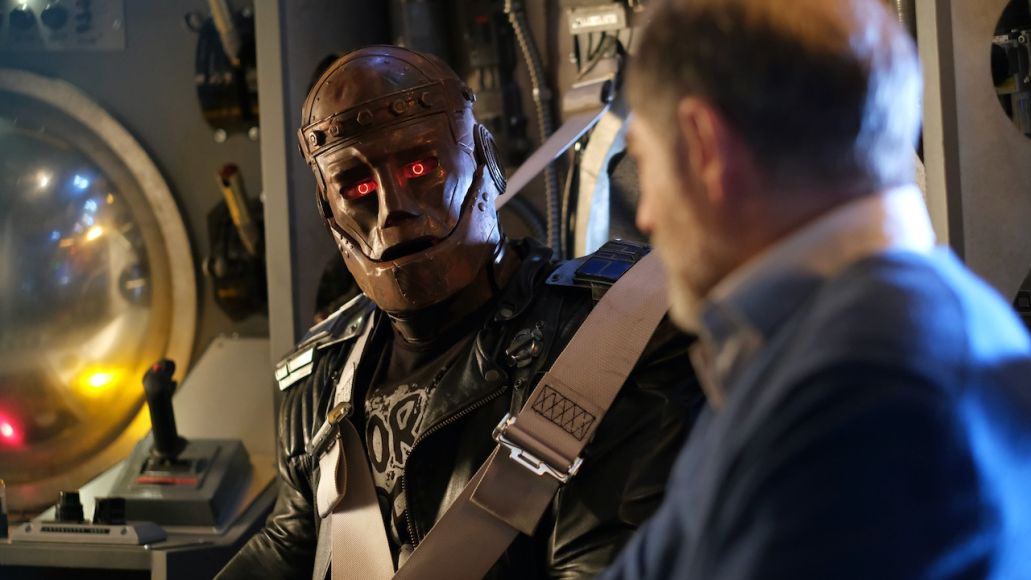 Yet Doom Patrol manages to thread the tonal needle of these kinds of deliberately-weird superhero shows, affecting just the right balance of eccentricity and drama to earn its cynicism and optimism alike. From the first episode, it throws all kinds of strangeness at the wall, from donkeys with an entire dimension hidden inside them to sentient, gender-queer thoroughfares like Danny the Street. The villain of the first season, Alan Tudyk’s Mr. Nobody, exists almost entirely outside the fourth wall, reminding his foes (and us) that we’re watching a chintzy series on a fourth-tier streaming service.

Despite its clear stylistic similarities to the X-Men — ahem, a group of super-powered oddballs living in a mansion under the thumb of a mercurial, wheelchair-bound mentor —  Doom Patrol‘s source material arguably preceded Stan Lee’s original comic by a matter of months. But Niles Caulder (Timothy Dalton), aka The Chief, is hardly Professor X. Underneath his kindness is an innate selfishness borne of his creation of the Doom Patrol in the first place as experiments to extend his own life. At the end of the first season, we learn that he was responsible for all the ‘accidents’ that created them in the first place: the car crash that turned Cliff Steele (Brendan Fraser) into Robotman; the test flight that made Larry Trainor (Matt Bomer) into Negative Man; the strange spirit that transformed Rita Farr (April Bowlby) into Elasti-Girl, giving Jane’s (Diane Guerrero) multiple personalities her superpowers; offering Vic Stone (Joivan Wade) his cybernetic implants; and so on. 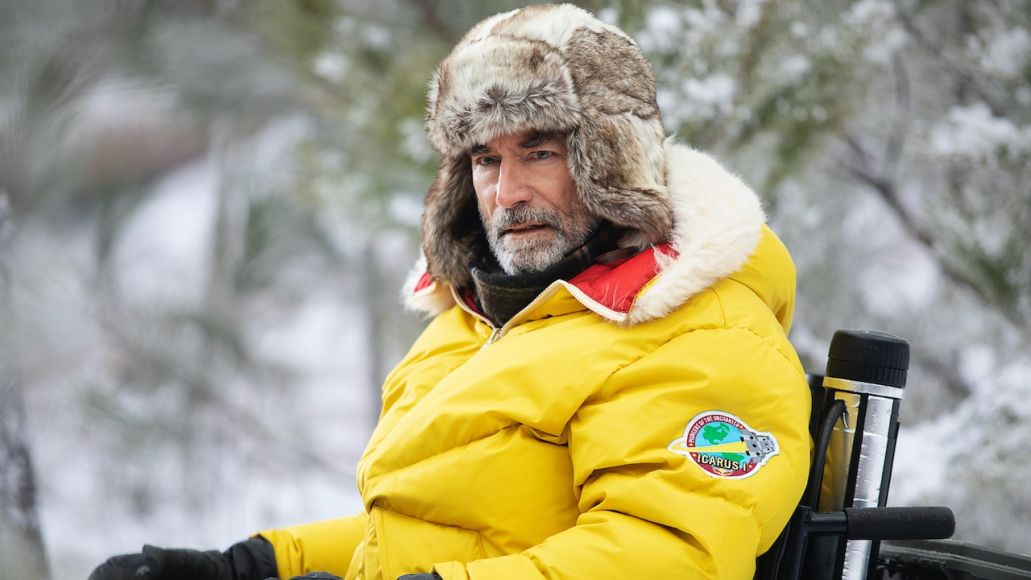 And yet, The Chief is paradoxically responsible for turning them into better people: Cliff was a selfish philanderer and deadbeat dad, Rita was a narcissistic Hollywood starlet, and Larry was a closeted gay man in the 1960s living a double life. Now, they’ve got a chance to reinvent themselves, freed of the shackles of their old lives. Most of Doom Patrol is spent putzing around in Doom Manor, spending time with the characters, without much of an outside influence on their movements outside the barest glance of season-long arcs. But in those moments, we can find growth and pain, love and loss, and introspection galore. Make no mistake, though; Doom Patrol is hardly This Is Us, so these grasps at catharsis usually come in the form of trips to the moon or being shrunk down to the size of dolls for several months.

Compared to, say, The Umbrella Academy, where our heroes have to deal with the specter of their shared, dysfunctional childhoods, the Doom Patrol each have their own issues to work out and need each other to do it. The Hargreeves were thrust into a family dynamic not of their own making, while Robotman et al. had already lived relatively full lives (and made decades worth of mistakes) before they shacked up with the Chief. They’ve got a lot of issues to unravel, and Doom Patrol refreshingly keeps its focus on healing these characters, with the world-ending circumstances they have to stop being directly tied to these lingering issues. You’re basically watching superhero therapy. With Umbrella Academy, we’re waiting for a shared family to get over the same bad influence; in Doom Patrol, each of our heroes has a different trauma-shaped hole they have to fill. 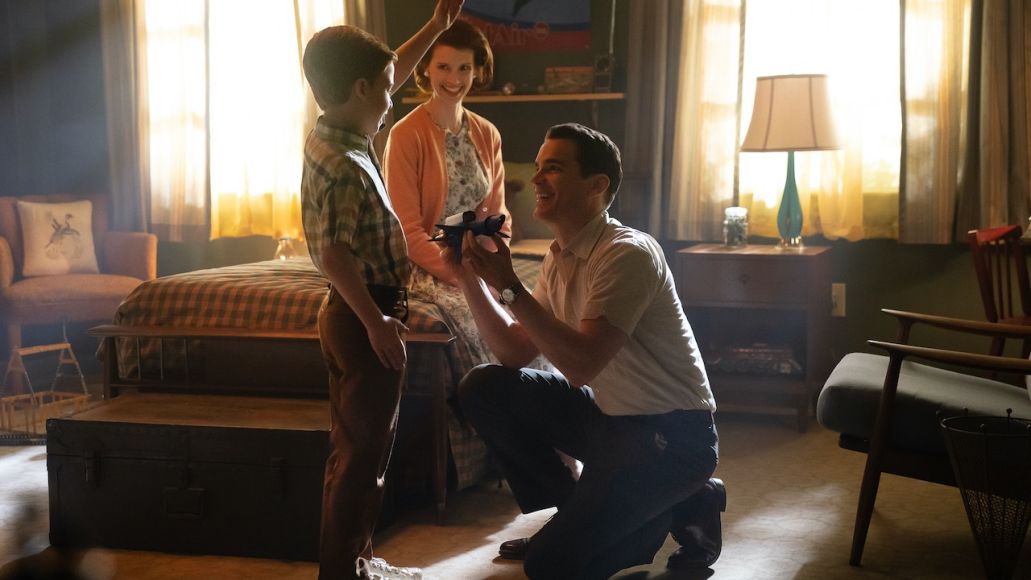 We see this a lot in the second season, as the Patrol must band together to act as erstwhile parents to Caulder’s daughter Dorothy (Abigail Shapiro), whose overactive imagination could well spell the end of the world. Having an external reason to get their shit together with a quickness is an interesting wrinkle for such insecure characters, forcing them to ‘grow up’ in ways they didn’t have to when just palling around Doom Manor. Suddenly, Rita begins to feel the itch to master her stretching powers, Cliff wants to reconcile with his own estranged daughter, and Larry wants to reach an understanding with the negative spirit that resides within him. Even Jane makes incredible sacrifices with the dozens of personalities within her to figure out what’s best for Dorothy. Parenthood forces you to fast-track a lot of emotional growth, and watching characters with the ability to level cities struggle through that is the reason Doom Patrol remains so emotionally rich even through the weirdness.

Most of the shows mentioned in this piece have seen marked improvements in their second season (well, we’ll see in a few weeks with The Boys), and Doom Patrol somehow managed to lock down an even more assured sense of its strange self. Gone is the overarching quest for The Chief, in favor of more personal stories that really dig deep into the progress our characters have made. Vic’s budding romance with a war vet who has her own ideas about Cyborg’s sense of herodom lets him reflect on his previous history of ambitious do-goodery. Jane spends virtually the entire season in the sprawling mind prison of the Underground, negotiating with her other personalities about whether to stick around with her new, dangerous family, or retreat into her own fragmented self. But it’s the gang’s intermittent check-ins with one another, their active choice to help each other with their problems, that make them a tighter, more interesting family than a lot of the televisual Justice Leagues we contend with. Despite the myriad nature of their traumas, that unique mix of neuroses might just be the thing that heals them all.

Doom Patrol almost has to be odder and more homespun than its premium streaming counterparts. The show clearly works with a smaller budget for these kinds of series, which forces them to embrace the visible seams in its presentation. Robotman and Cyborg’s cybernetic implements are hardly feature-film quality, but that’s part of the charm: they look as out-of-place as they feel in their own bodies. There’s an underdog quality to the show that matches the flavor of the characters themselves — if you love these characters, as I do, you want them (and the oft-ignored show they live in) to survive. Hopefully, its move to HBO Max gives it the audience it deserves. Shows about superheroic misfits often drop the ball once it’s time to get over the issues and save the day; Doom Patrol is fully committed to its oddness. It’s that rarified nature that makes it the strongest of this new, curious subset of superhero shows.