Spirit Adrift have announced the upcoming release of their fourth full-length album, Enlightened in Eternity, due October 16th. The band has also shared the lead single, “Harmony of the Spheres”.

Picking up where they left off with 2019’s Divided by Darkness, Spirit Adrift deliver another riff-filled heavy metal ripper with “Harmony of the Spheres”. Evoking vintage Ozzy Osbourne and Judas Priest, singer-guitarist Nathan Garrett continues to get stronger with each release — his vocals more confident and his guitar playing as piercing and tight as ever. The band’s ability to fuse melody with elements of speed metal and doom makes their songs particularly memorable, and the new single is no exception.

“I wrote the songs on Enlightened in Eternity before my life fell apart, and from the beginning I set out to make this our most uplifting and empowering album,” Garrett commented in a press release. “I’m glad I did that, because ironically enough, these songs helped me keep going when things got bad. I’m proud of the work [drummer] Marcus [Bryant] put in, I’m proud of these songs, and I’m proud of how we navigated the entire experience. This is the most challenging record I’ve ever made, and it’s my favorite record I’ve ever made. I hope it helps others the way it helped me.”

Garrett added, “Making a Spirit Adrift album is always intense, but Chained to Oblivion and Curse of Conception dealt with issues from my past, and Divided by Darkness dealt with external issues from more of a philosophical perspective, so there was a bit of a protective layer of detachment between the material and myself. On the other hand, when Marcus and I recorded Enlightened in Eternity, we were in the middle of a lot of intense emotional upheaval — hour to hour, minute to minute. Some days it took everything I had to keep working, particularly when it was time to record vocals.”

Like with previous LPs, Enlightened in Eternity is adorned with a classic illustration that harkens back to the heavy metal record bins of the 1980s. The album was produced by Bryant, Garrett, and Ryan Bram, who also engineered and mixed the tracks.

“From a technical standpoint, things couldn’t have gone smoother,” Garrett continued. “But from an emotional standpoint, it was brutal. The silver lining is that our hearts and souls are embedded into this record with a raw immediacy and urgency that’s unmatched by our previous material.”

Pre-order Enlightened in Eternity via 20 Buck Spin or Bandcamp. Stream “Harmony of the Spheres” and check out the artwork and tracklist below. 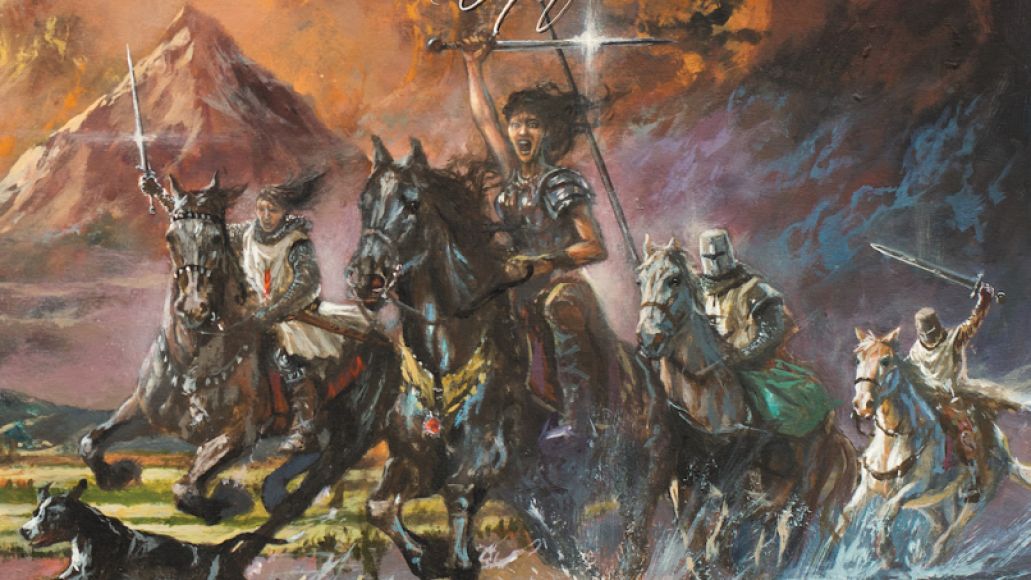 Enlightened in Eternity Tracklisting:
01. Ride into the Light
02. Astral Levitation
03. Cosmic Conquest
04. Screaming from Beyond
05. Harmony of the Spheres
06. Battle High
07. Stronger Than Your Pain
08. Reunited in the Void